Additionally, Inbee Park was honored for winning the Rolex ANNIKA Major Award and Sei Young Kim accepted her Louise Suggs Rolex Rookie of the Year Award, which she clinched with two events remaining in the season. 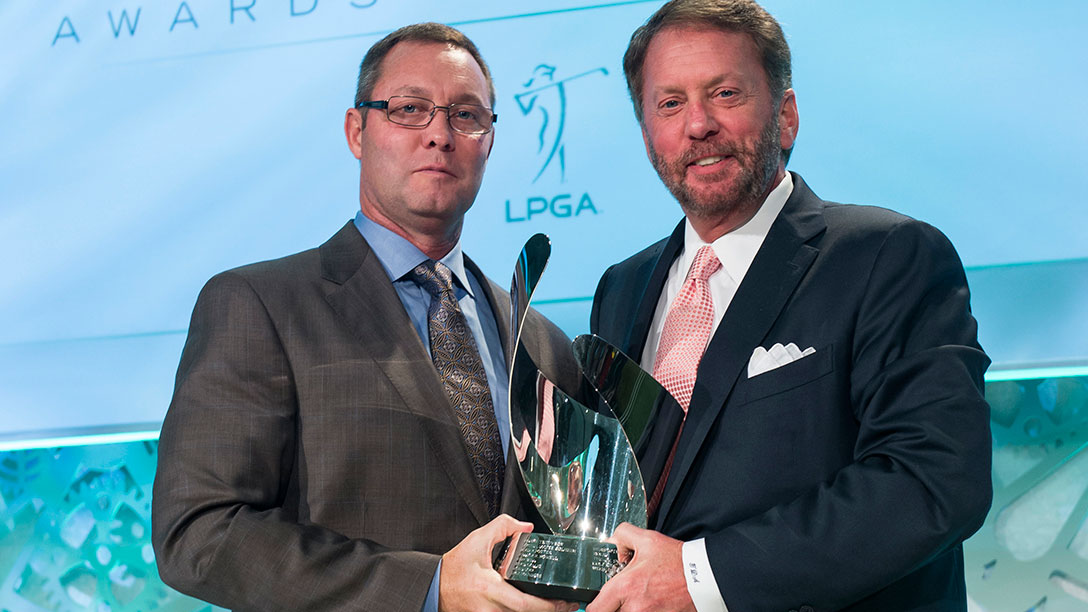 LPGA Commissioner Mike Whan presented this year’s Commissioner’s Award to Terry Duffy, Executive Chairman of CME Group. Since 2008, CME Group has supported the LPGA in combination with their successful Global Financial Leadership Conference and in 2011 became Title Sponsor of the season ending CME Group Tour Championship. In 2014 CME Group and the LPGA launched the Race to the CME Globe which delivers the single largest payday ever in women’s golf. The company’s commitment to women’s golf has allowed unprecedented opportunity for LPGA members and increased global exposure.

The Commissioner’s Award, introduced in 1991 by the LPGA, honors a person or organization who has contributed uniquely to the LPGA and its members, who has furthered the cause of women’s golf, and whose character and standards are of the highest order. Previous award recipients have included Karsten and Louise Solheim; Jamie Farr; the LPGA Founders; Rolex; Smucker’s and Wegmans. 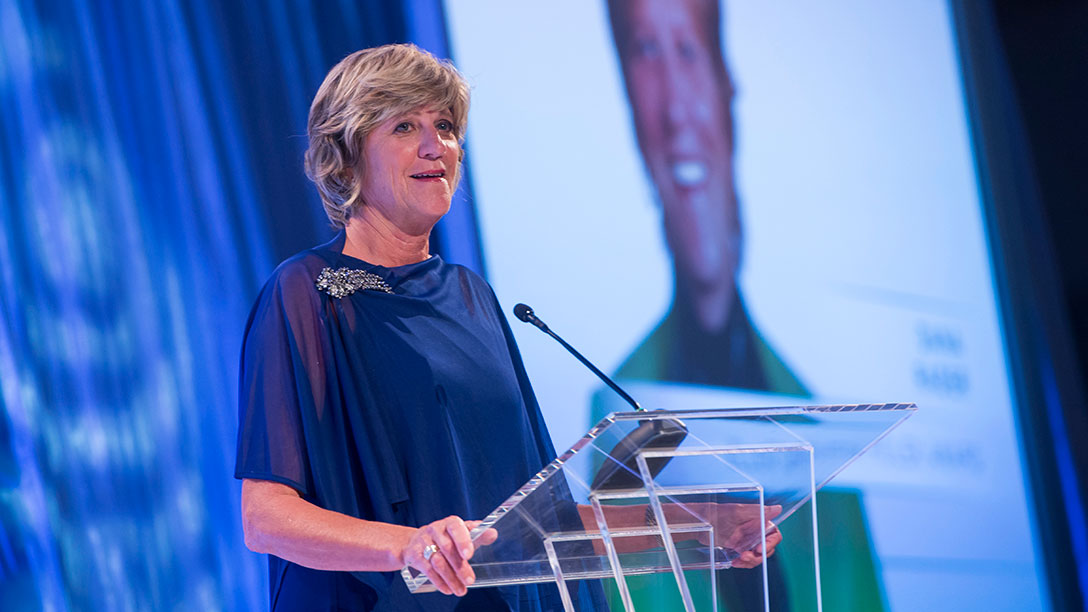 Dana Rader, a Master Professional member of the LPGA Teaching & Club Professionals, joins an elite group of her peers this year as this year’s recipient. In a career spanning 35-plus years, Rader has founded the Dana Rader School of Golf, which teaches over 17,000 students annually, including over 500 juniors. Rader’s previously been named the 1990 LPGA T&CP National Teacher of the Year and has been among Golf Magazine’s Top 100 Teachers in America. She currently serves as the National President of the LPGA T&CP and has made immense contributions to the development of the TEP program and the program in Korea. 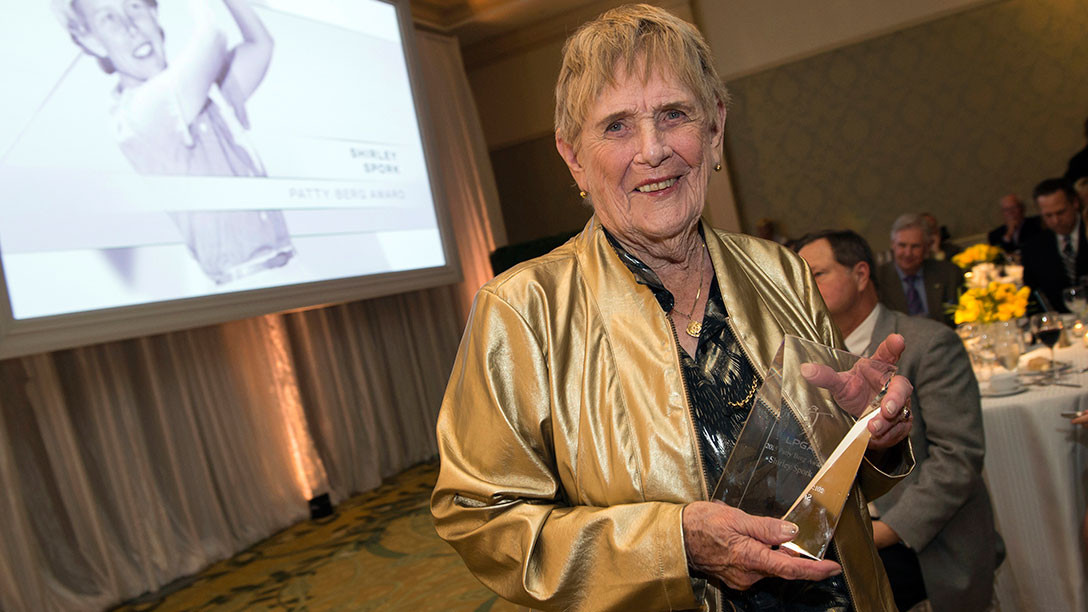 The Patty Berg Award, established in 1979 by the LPGA Board of Directors, recognizes an individual for outstanding contributions to women’s golf. The award is named in honor of LPGA Founder Patty Berg and it recognizes her diplomacy, sportsmanship, goodwill, and contribution to the women’s game.

This year’s award is presented to one of the LPGA’s 13 Founders, Shirley Spork. Shirley has dedicated her life to growing the game as an LPGA founder, player, teacher and advocate and golf is as much a passion for Shirley today as it was when the LPGA was founded. She helped spearhead the formation of the LPGA T&CP and is well known for her exceptional teaching ability. Beginning in 1960, she served as the chairperson of the LPGA Teaching Division for six consecutive years. Shirley was one of six members of the inaugural class of the LPGA Teaching and Club Professional (T&CP) Hall of Fame, named the 1998 Ellen Griffin Rolex Award winner and was a two-time LPGA National Teacher of the Year (1959 & 1984). 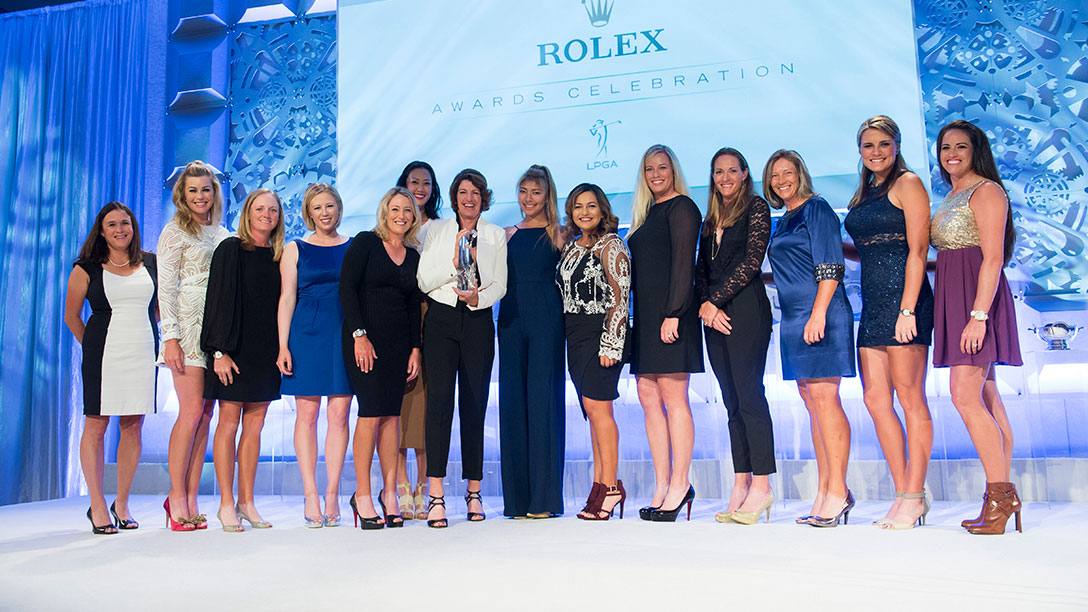 Inkster And Meadow Voted By Peers

LPGA and World Golf Halls of Famer Juli Inkster is this year’s recipient of the William and Mousie Powell Award, given annually to an LPGA member, who in the opinion of her playing peers, by her behavior and deeds, best exemplifies the spirits, ideals and values of the LPGA. She was joined on stage by all 12 members of her winning 2015 U.S. Solheim Cup Team.

In a sparkling 30-plus year LPGA career, the only thing more obvious than her love of the game is her love for her peers. The affable United States winning Solheim Cup Captain is quick with a smile, even quicker with a joke, and always the first to ask how she can help. The 31-time LPGA winner and seven-time major champ may joke that the majority of the Tour is younger than her daughters these days, but her game has proven timeless and the depth of the respect for Inkster reaches every tentacle of the LPGA Tour.

The late Mousie Powell, for whom this award was named, was a close supporter and friend of the LPGA from the 1950s until her death on Jan. 18, 1997. She was married to William Powell, a Hollywood legend and one of its leading male actors. Mousie, who was also featured in movies during that time, started the William and Mousie Award in 1986. Past recipients include: Kathy Whitworth, Nancy Lopez, Pat Bradley, Betsy King, Juli Inkster, Lorena Ochoa and Chella Choi.

The Heather Farr Perseverance Award honors an LPGA player who, through her hard work, dedication and love of the game of golf, has demonstrated determination, perseverance and spirit in fulfilling her goals as a player. Stephanie Meadow received the news the night before leaving for the season-opening Coates Golf Championship that her father, Robert, was diagnosed with Stage IV pancreatic cancer during a routine check-up. Robert was Stephanie’s biggest supporter on the course, rarely missed an event of hers throughout her career and saw his only child achieve her lifelong dream of becoming an LPGA Tour member. Stephanie decided to take three months off in the beginning of her rookie year to help take care of her dad throughout his fight. He lost his battle in May and Stephanie returned to play later that month, finishing her rookie season in his honor. 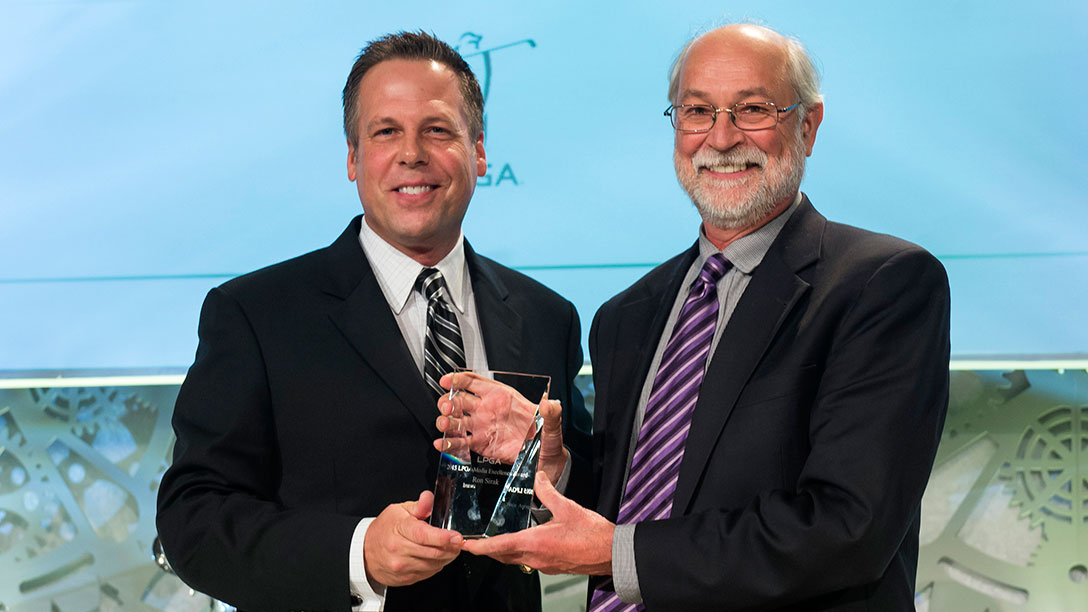 The LPGA Media Excellence Award was established to recognize a valued member of the media who has dedicated themselves throughout their career to promote and advance the women’s game through their work.

This year’s recipient is one of the most trusted voices in the game of golf. Known for his contagious enthusiasm to shine a brighter light on the women’s game, Ron Sirak has championed the LPGA Tour and its stars for decades, earning the highest respect of the players and staff alike through his fair and passionate reporting and storytelling.

His Golf World piece that led him to travel to Rwanda and report the story of six LPGA players on a humanitarian mission to help the more than one million orphans in the country of eight million, won Ron a 2008 GWAA award. The award was established in 2010 and was previously presented at the Evian Championship. Past recipients include Lewine Mair, Judy Rankin and David Cannon.

Left to Right: Sanra Gal, Cristie Kerr, and Brittany Lang pose on the red carpet before the LPGA Rolex Players Awards at the Ritz-Carlton, Naples 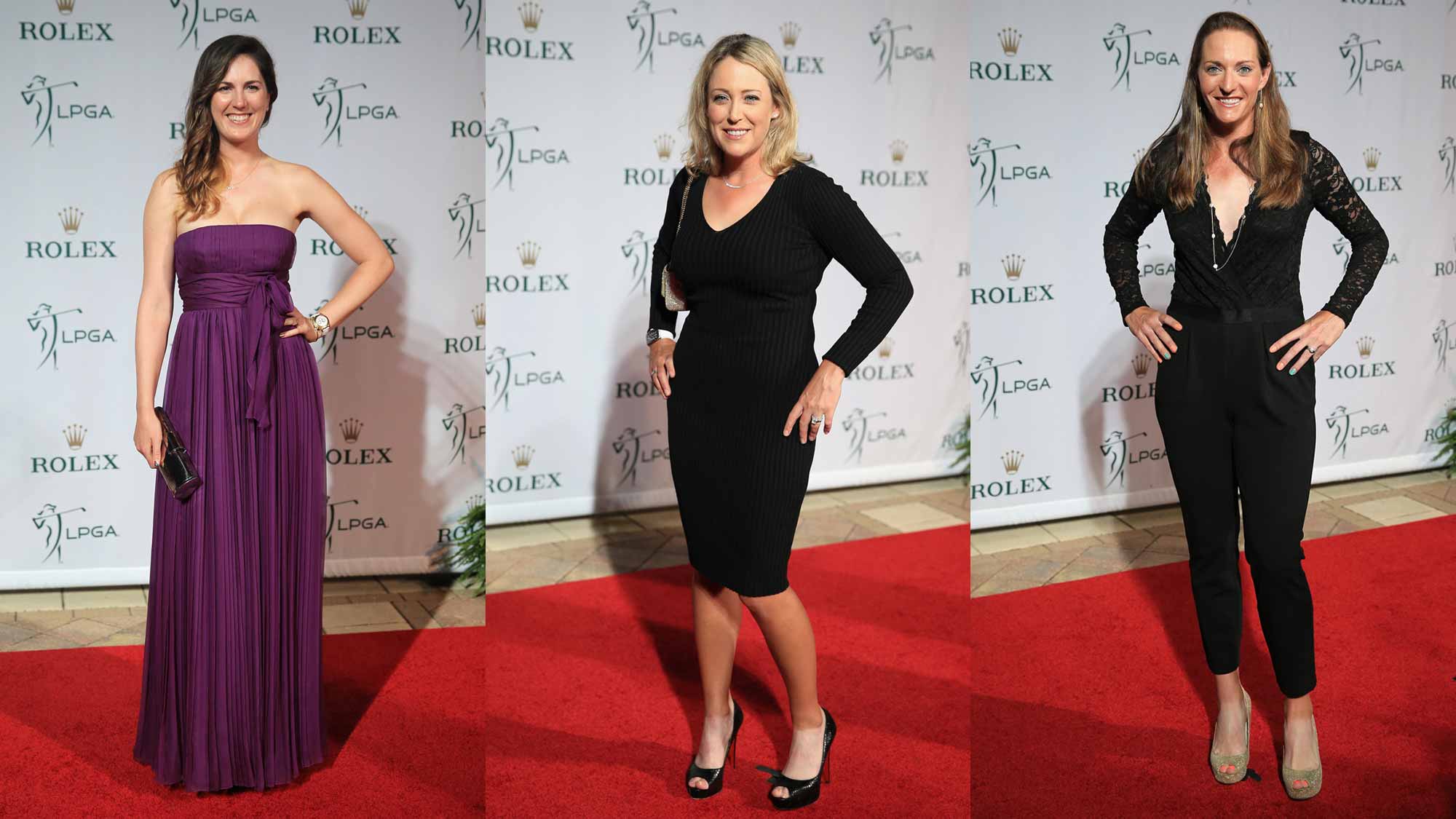 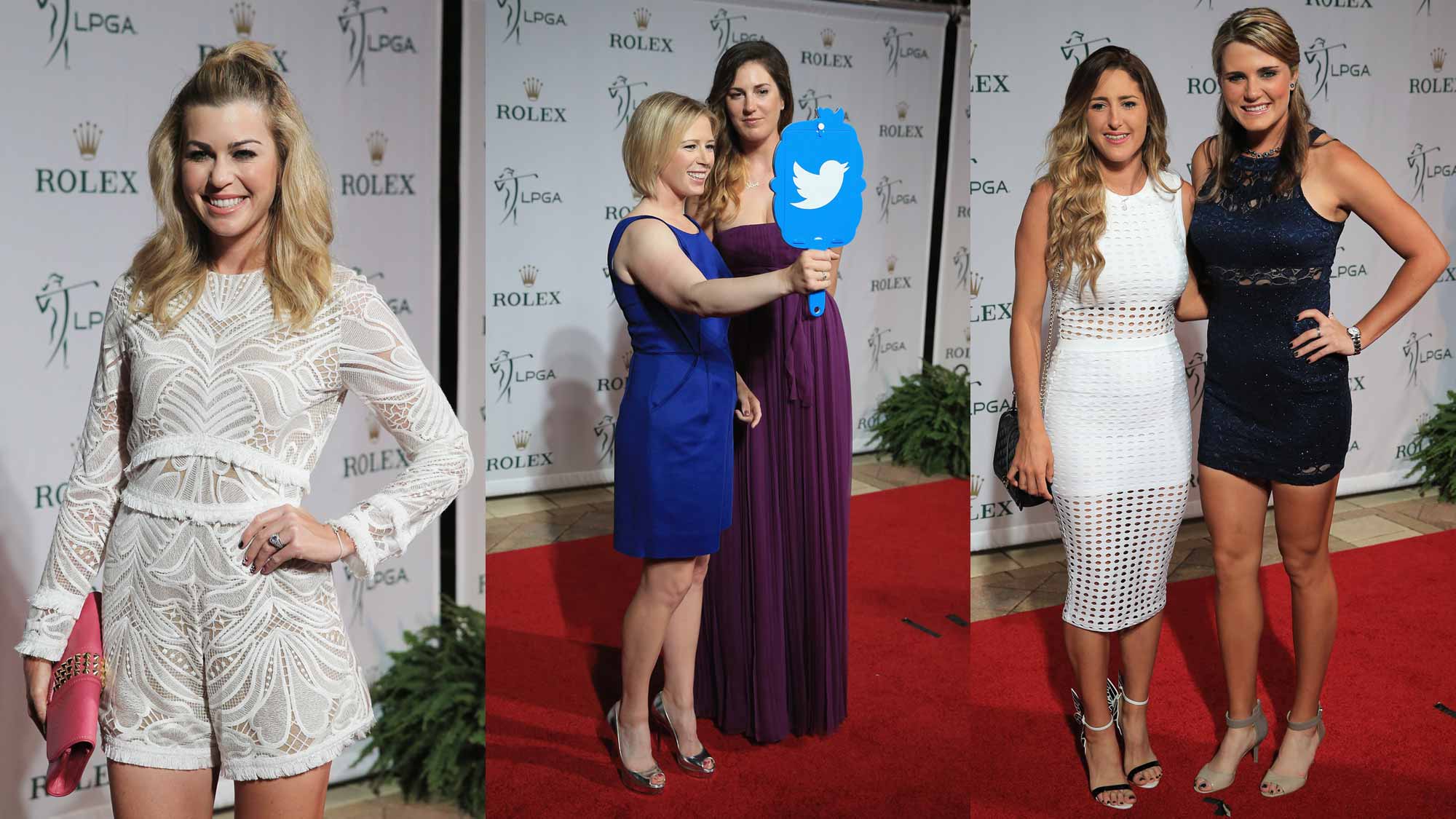 Minjee Lee (L), Brittany Lincicome (Center) and Alison Lee on the Red Carpet before the LPGA Rolex Players Awards at the Ritz-Carlton, Naples 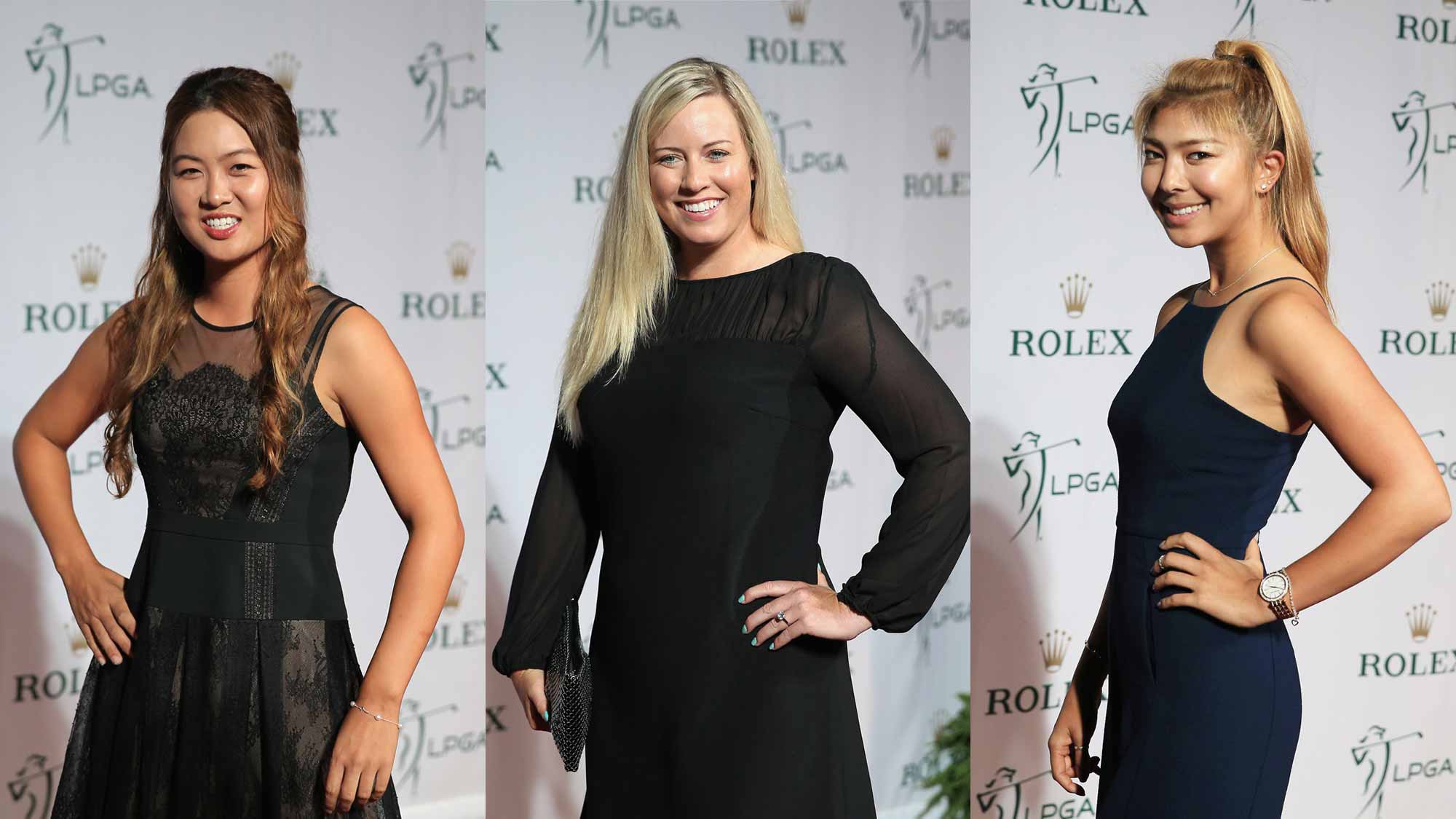 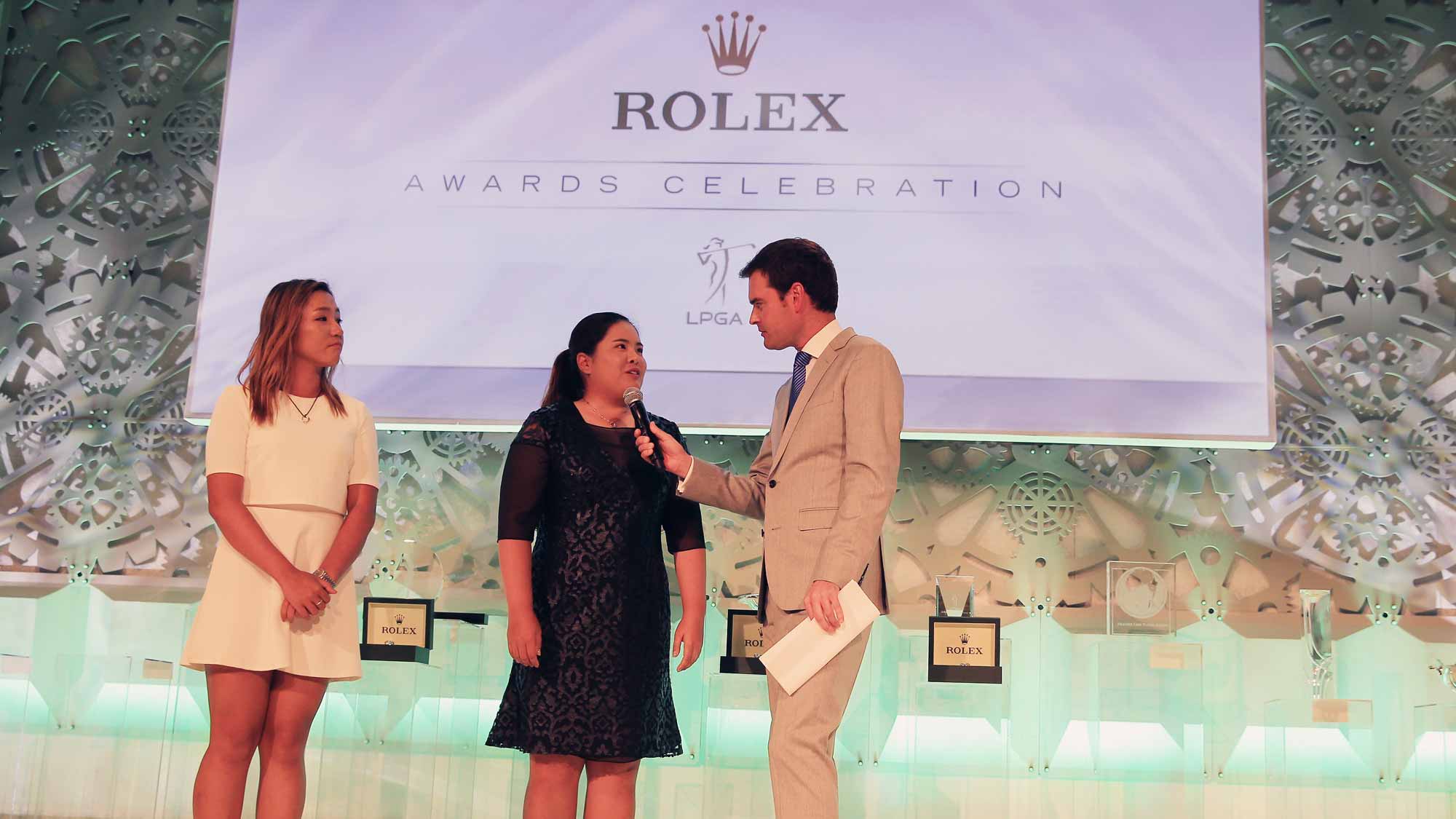 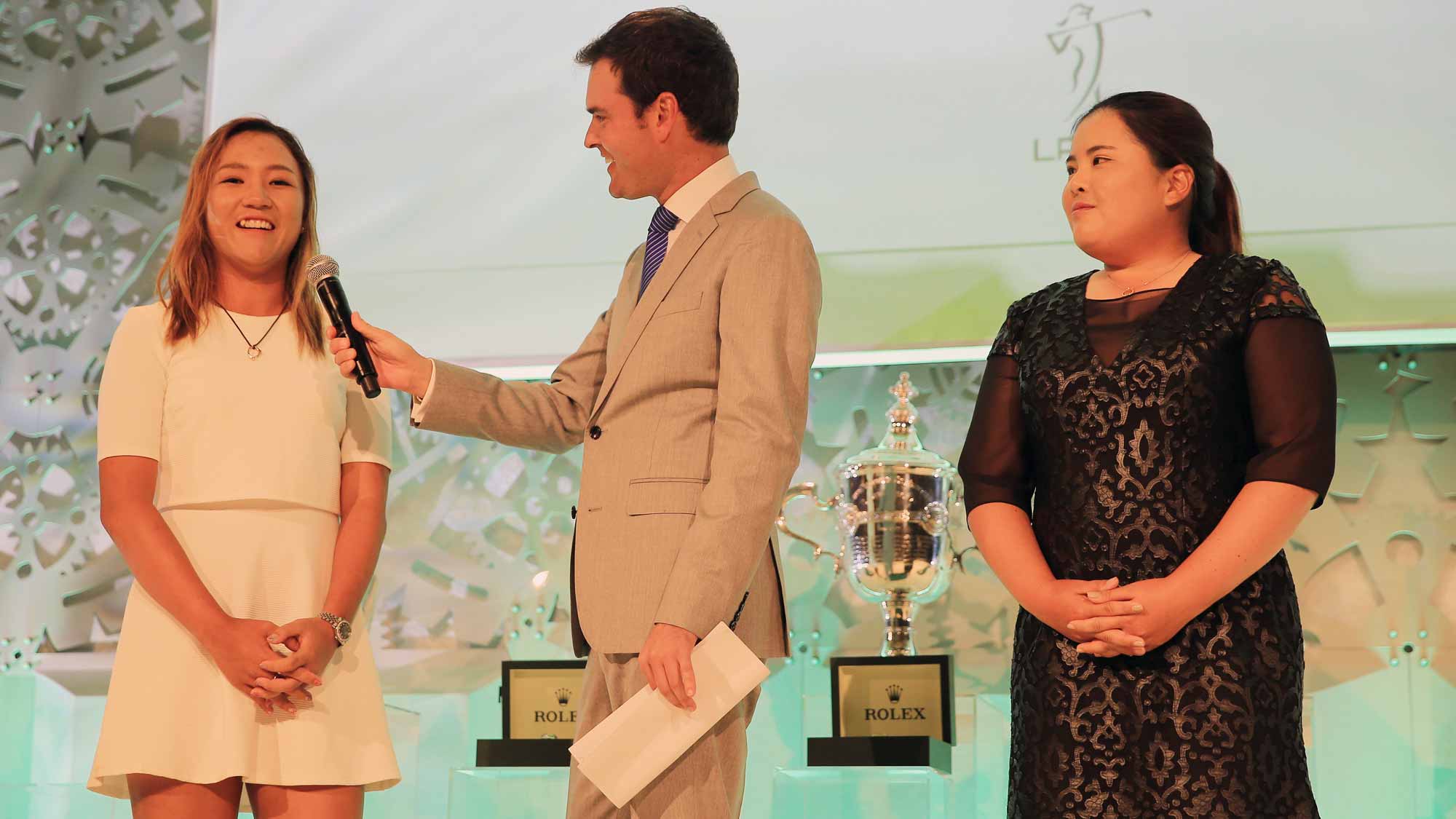 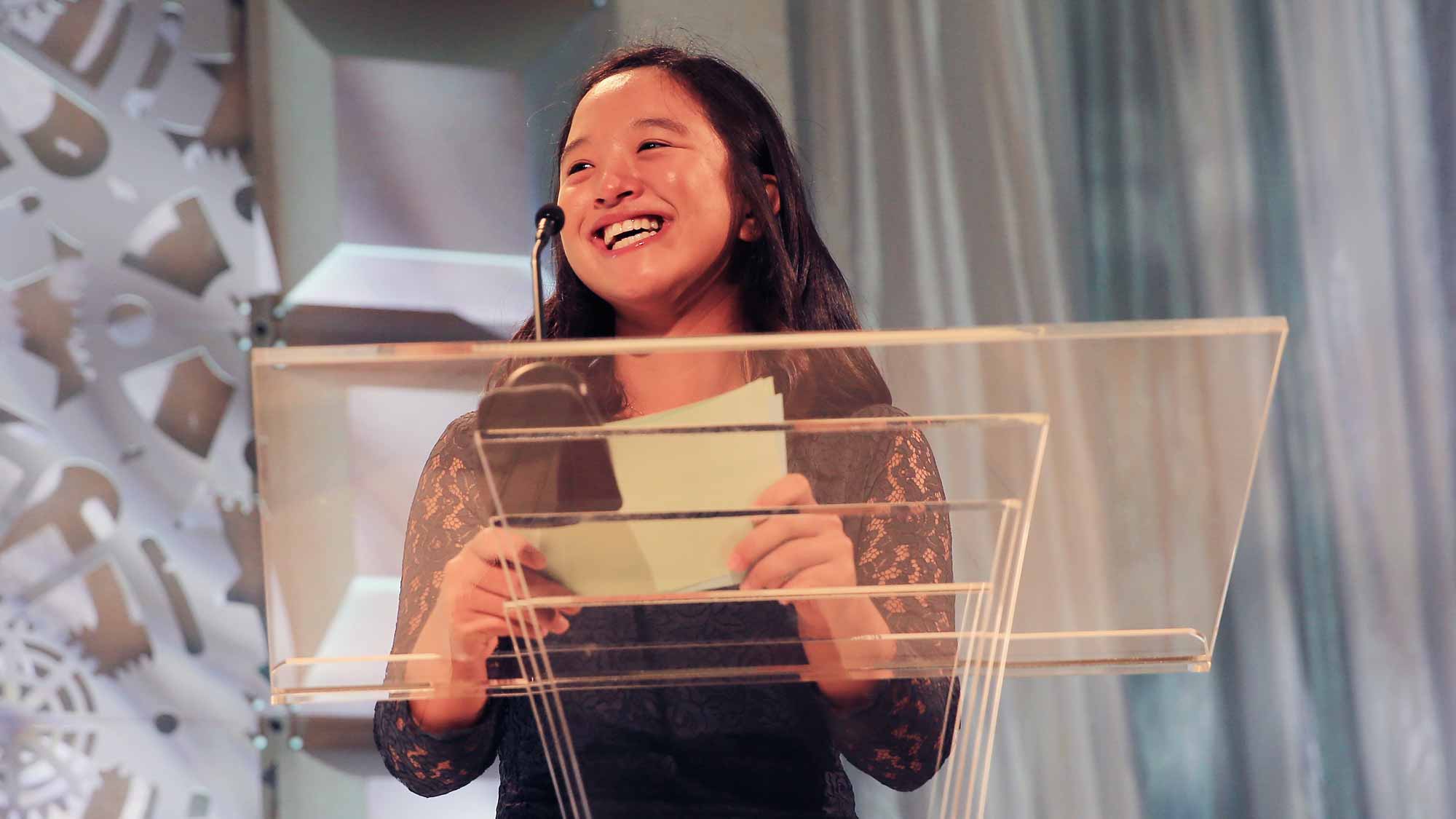 LPGA player Stephanie Meadow of Northern Ireland poses on the red carpet as she arrives to the LPGA Rolex Players Awards at the Ritz-Carlton, Naples
Photo Credit: 2015 Getty Images 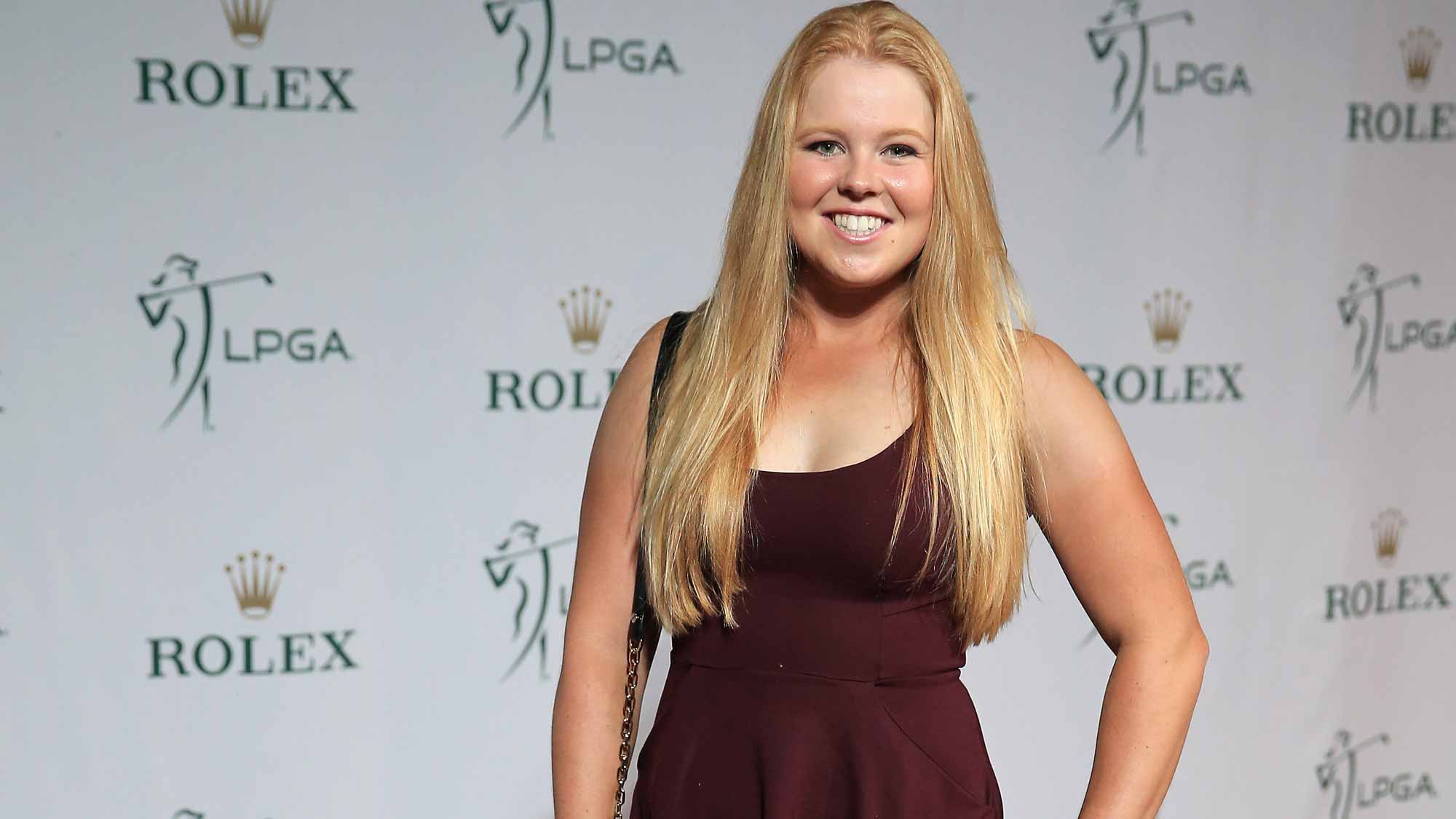 Shirley Spork, one of the LPGA founders, poses with the Patty Berg Award at the LPGA Rolex Players Awards at the Ritz-Carlton, Naples
Photo Credit: 2015 Getty Images 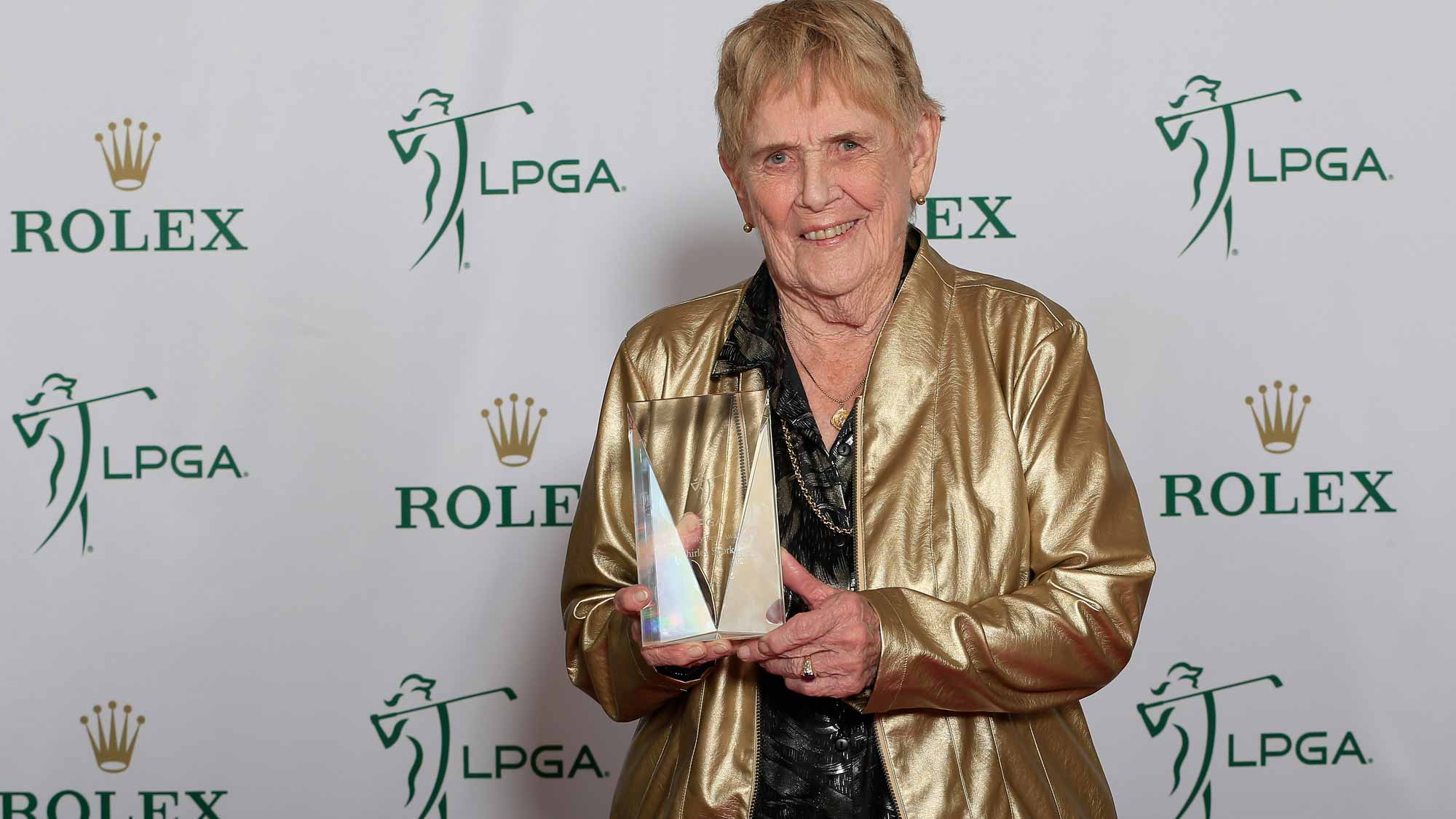 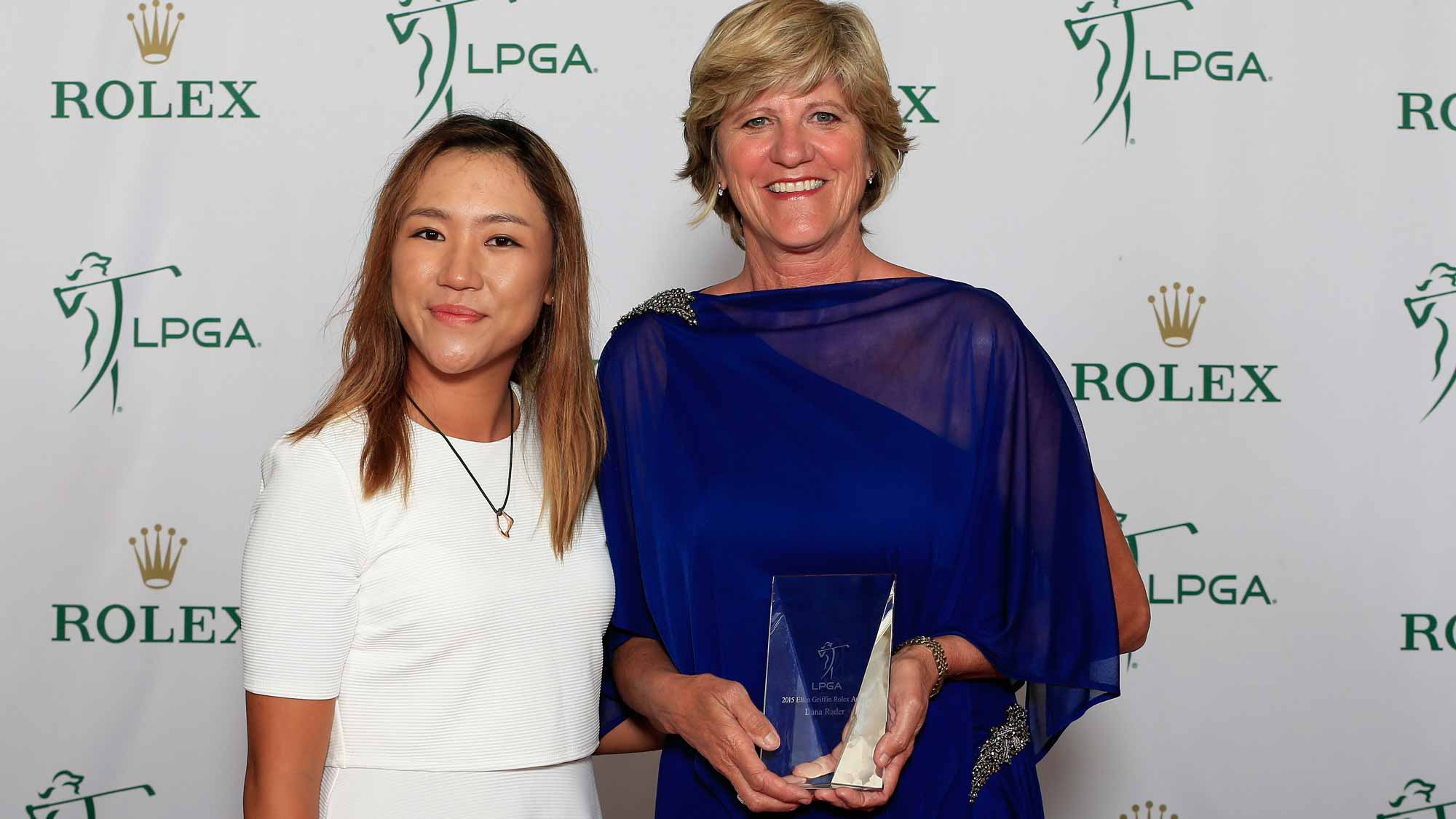 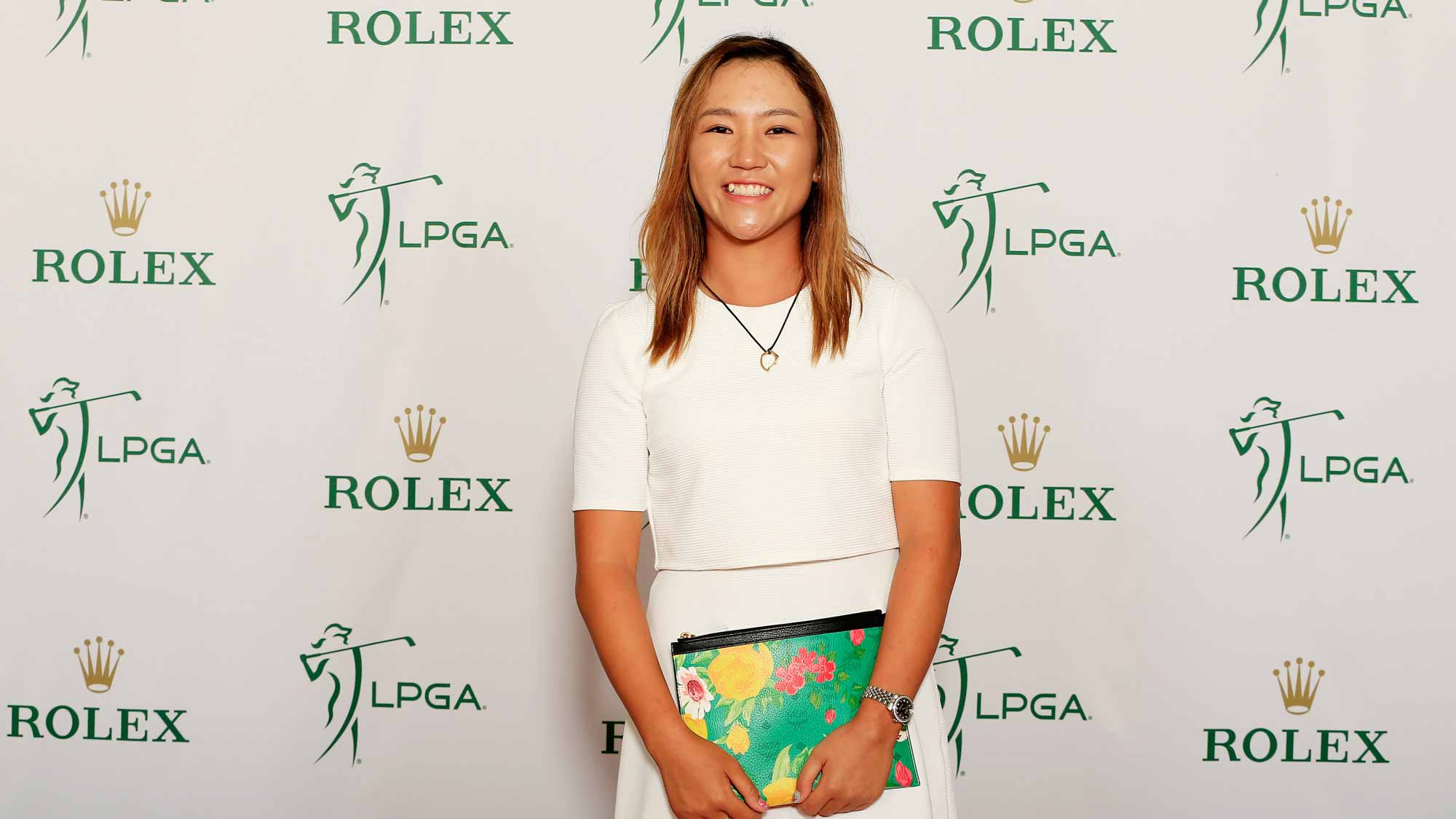 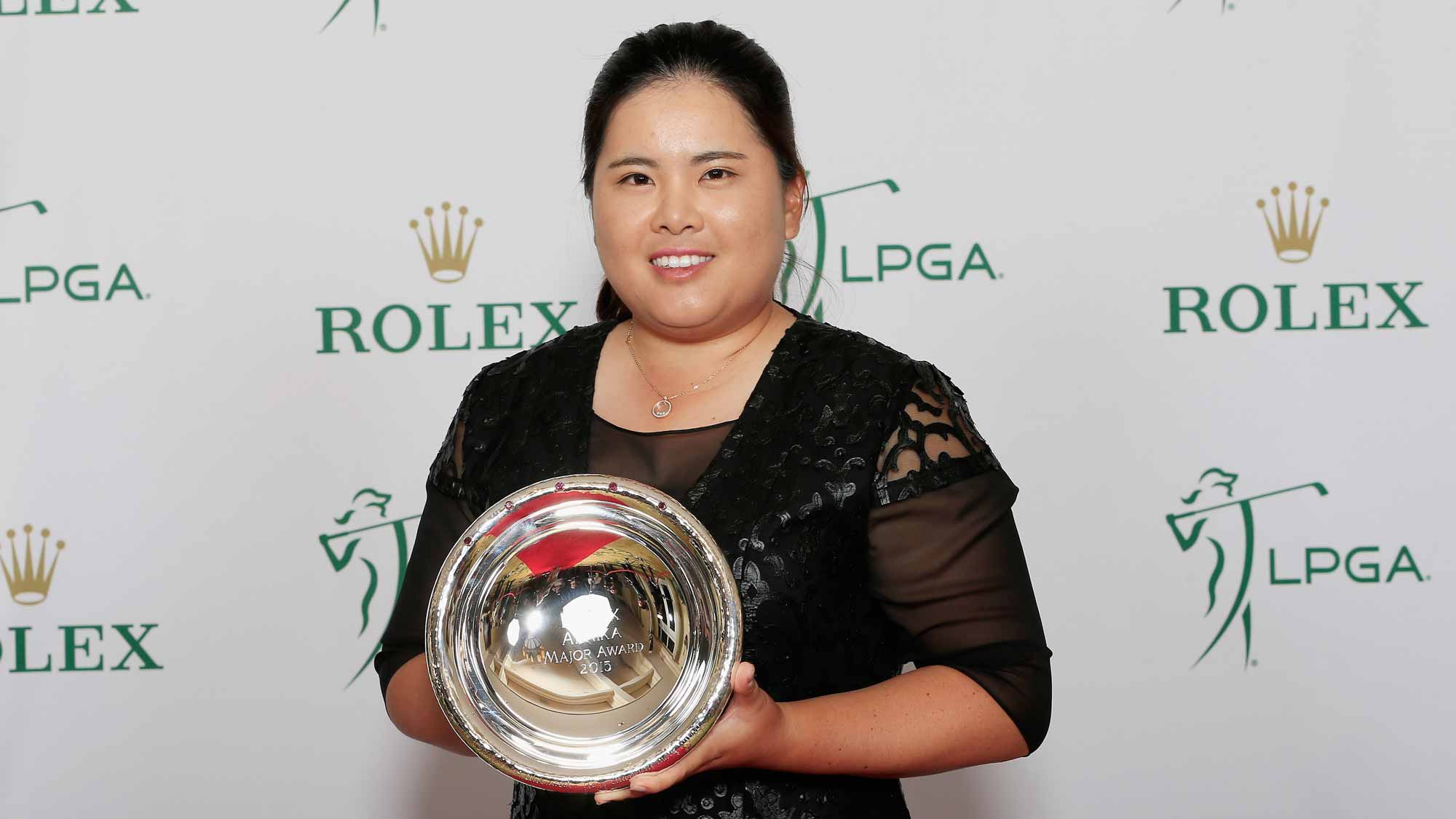