Three Events Remain - Who is In The Hunt for The Year's Biggest Awards?

Three Events Remain - Who is In The Hunt for The Year's Biggest Awards?

Player of the Year.

Race To the CME Globe.

They’re all up for grabs as the Tour heads into the final three weeks of the season.

For the second consecutive year, Lydia Ko finds herself in a tight race for the season ending awards. Last year, the world No.1 was neck and neck with Inbee Park for Rolex Player of the Year, the Vare Trophy and Race to the CME Globe. Ko earned Player of the Year honors as well as the $1 million dollar payday that came with winning the Race to the CME Globe, which she won in back-to-back years.

This year, Ko is in a battle with world No.2 Ariya Jutanugarn for Race to the CME Globe, Player of the Year and money title. Through the Sime Darby LPGA Malaysia, Jutanugarn leads Ko by just 51 points in the Race to the CME Globe Standings. Points will reset following the Lorena Ochoa Invitational with the top-9 players in the standings having a mathematical chance of winning. The top-3 in the standings will control their own destiny by winning the CME Group Tour Championship they will also win the season long race. 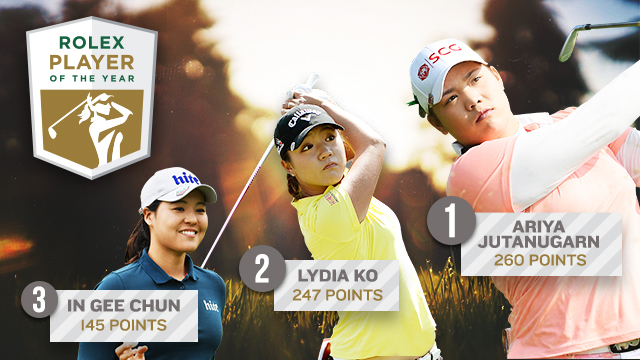 Last year, Ko edged out Park for the Rolex Player of the Year. This time around, Ko trails Jutanugarn by 13 points heading into the TOTO JAPAN CLASSIC. Points are awarded to players who finish within the top-10 and receive between one and 30 points depending on the finish. With such a small margin separating the two, a top-10 finish this week could put Ko back on top. Both Ko and Jutanugarn are in the field this week in Japan. 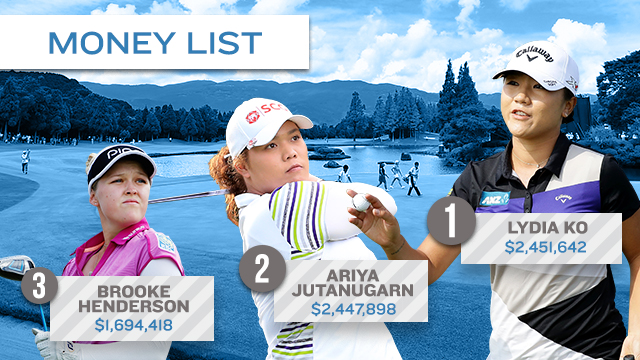 Ko currently holds a narrow margin ahead of Jutanugarn at the top of the money list, leading by just $3,744. In 2015, Ko took home the title with official earnings totaling $2,800,802 for the year. 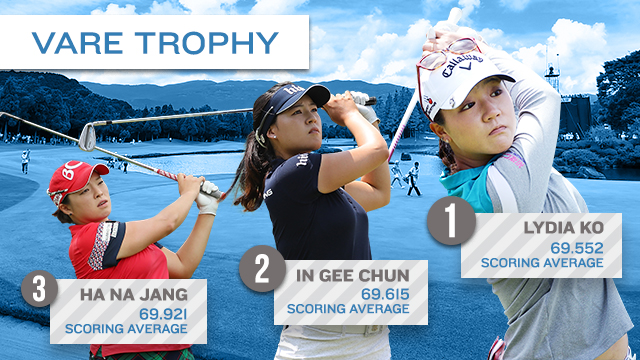 The Vare Trophy is awarded at season’s end to the player with the lowest scoring average. Ko currently leads at 69.552 through 22 events. In Gee Chun is a close second at 69.615 through 17 events. Both players are in the field this week in Japan. Inbee Park took home the trophy in 2015. 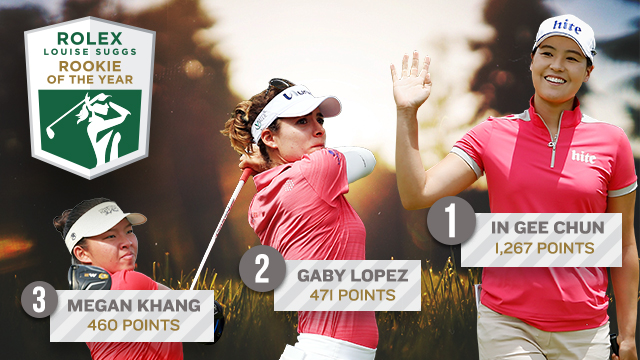 Two-time major champion In Gee Chun locked up the Louise Suggs Rolex Rookie of the Year honors well before the season’s end. Chun earned membership on Tour for 2016 after winning the U.S. Women’s Open in 2015. She took up membership this season and won for the second time at the Evian Championship for her second major title. Chun is also in the field this week in Japan.