Evian-les-Bains, France (Sept. 17, 2017) – So Yeon Ryu, of the Republic of Korea, has won the 2017 Rolex ANNIKA Major Award, which recognizes the player who has the most outstanding record in all five major championships during the current LPGA Tour season.

Ryu received the honor thanks to her win at the ANA inspiration, her second career major championship victory, and a tie for third at the U.S. Women’s Open Championship.

“First of all, I’m so honored to this have award, especially (because) it’s named after one of the greatest women’s golfers in our golf history,” Ryu said. “The other thing is I think the play in the major is fortunate enough, because it’s really tough to contend in a tournament, as well. But at the same time, it’s truly an honor to have this award because that means I was able to handle all of the major tournaments.”

Points for the Rolex ANNIKA Major Award are awarded at all five major championships to competitors who finish among the top 10 and ties. To take home the award, a player must also win at least one of the five majors. Danielle Kang (KPMG Women’s PGA Championship), Sung Hyun Park (U.S. Women’s Open), In-Kyung Kim (Ricoh Women’s British Open) and Anna Nordqvist (The Evian Championship) were the other players to qualify.

Ryu has enjoyed one of the best seasons of her LPGA career this year. Her two wins (ANA Inspiration, Walmart NW Arkansas Championship presented by P&G) are the second-most by a single player on Tour this season and represent the first time she has won multiple events in the same season. Ryu has racked up eight additional top-10 finishes, including two runner-up results, and currently holds the lead in the Rolex Player of the Year standings with 150 points.

On June 26, Ryu became the third player from the Republic of Korea to reach No. 1 in the Rolex Women’s World Golf Rankings. She is the 11th different golfer to reach No. 1 since the Rolex Rankings started in 2009 and has held the top spot for the past 12 weeks.

A nine-time winner on the Korea Ladies Professional Golf Association, Ryu earned LPGA membership by defeating Hee Kyung Seo in a three-hole playoff at the 2011 U.S. Women’s Open for her first career LPGA win and major championship. In 2012, one win and 15 additional top-10 finishes helped earn her the Louise Suggs Rolex Rookie of the Year award. She added a third LPGA win in 2014 and also collected a win on the Ladies European Tour in 2015 before her two wins this year. 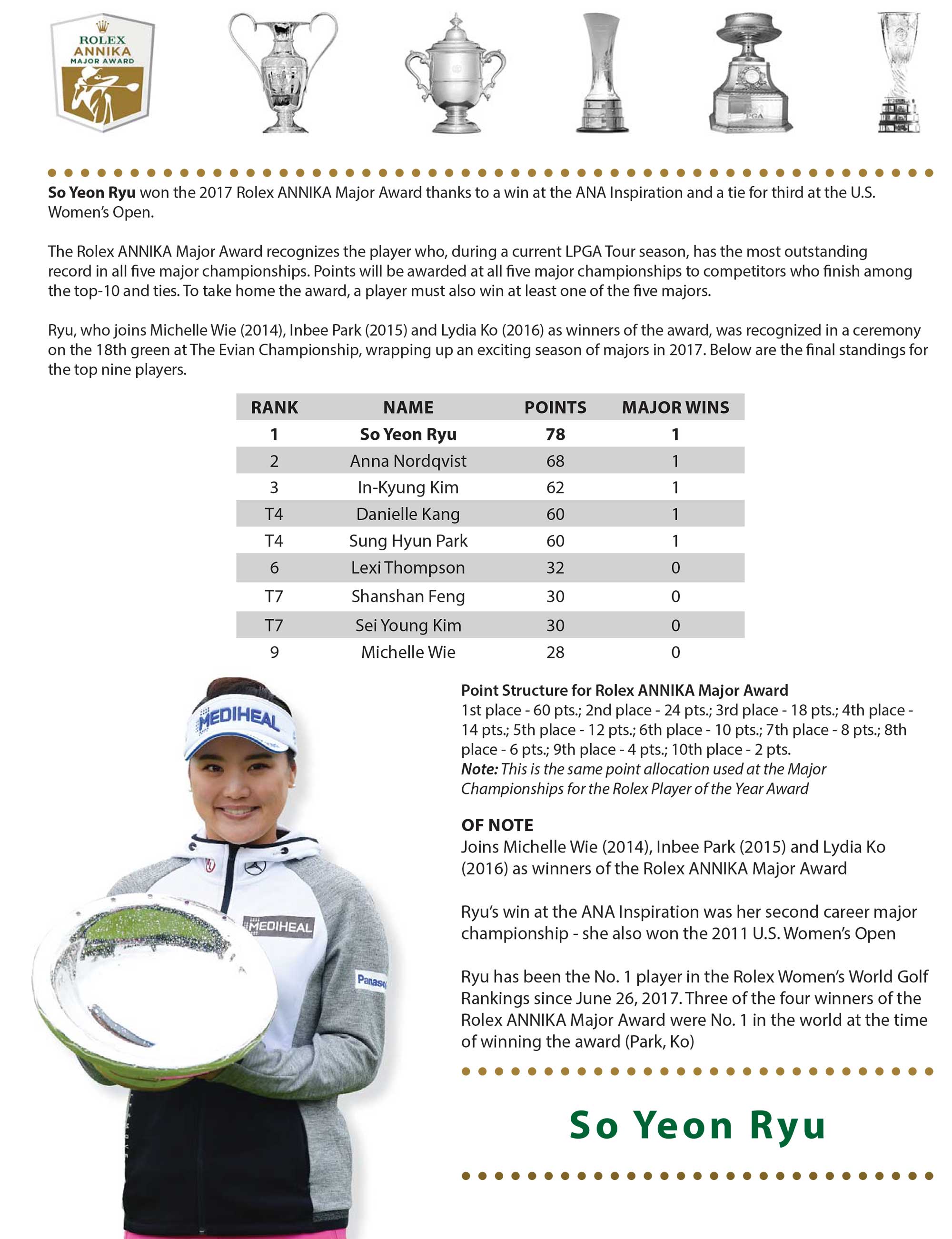