Written By: Bret Lasky
Bret spent four seasons as the media manager on the Epson Tour before becoming a content manager for LPGA.com and SymetraTour.com in October of 2017. Prior to the LPGA, he spent four years in Minor League Baseball with the Delmarva Shorebirds.
﻿
0Share on Facebook
0

It was her scariest day on a golf course and she was nearly 10,000 miles away from her hometown of Fulton, Mississippi. What’s even scarier? She only remembers a few things about the incident. Rising LPGA star and 2016 Symetra Tour graduate, Ally McDonald, had just finished her sixth hole in the first-round of the Sime Darby LPGA Malaysia and arrived on the tee box at No. 16.

“I said my caddy Dan’s name and then I guess I fainted and ended up having three seizures,” explained McDonald, who can only explain much of what happened through what her caddy, Dan Chapman, witnessed. “I had one on the tee box, one in the ambulance on the way to the emergency room and a few hours later had a third when they were taking me to get a CT (computed tomography) scan.”

McDonald remembers just a few things about that day in Malaysia – a birdie putt and a double-bogey on the par-3 when she hit her tee shot in the water. She also vaguely recalls regaining consciousness on the tee box and being surrounded by paramedics, her playing partners Alison Lee and Michele Koh and their family members.

The 25-year-old was in the ICU in Malaysia for two days until Friday and then was moved to a hospital room once a bit more stable and remained there for a week while her levels were closely monitored.

“The doctors in Malaysia diagnosed me with heat exhaustion and severe dehydration,” explained McDonald, who had never had a seizure prior to the three in late October. “After all the results of my CT and MRI came back completely normal, they went in the heat exhaustion and dehydration direction as the cause of the seizures.”

The hope was that all her levels would return to normal by the time of her flight on Sunday night. Unfortunately, that didn’t happen. As soon as the family realized that the hospital needed to keep McDonald as a precautionary measure for a few extra days, McDonald’s mom, Angie, hopped on a plane and arrived in Malaysia around 1:30 in the morning on Tuesday.

“My caddy Dan stuck with me, even after mom arrived, until I got out of the hospital,” explained McDonald. “Dan was awesome throughout the whole thing and stayed by my side.”

McDonald eventually was discharged on the following Wednesday after the tournament and was back in Mississippi by Friday. She stayed home for about five days without touching a club and slowly eased back into hitting shots and playing nine holes on Thursday and Friday of last week. 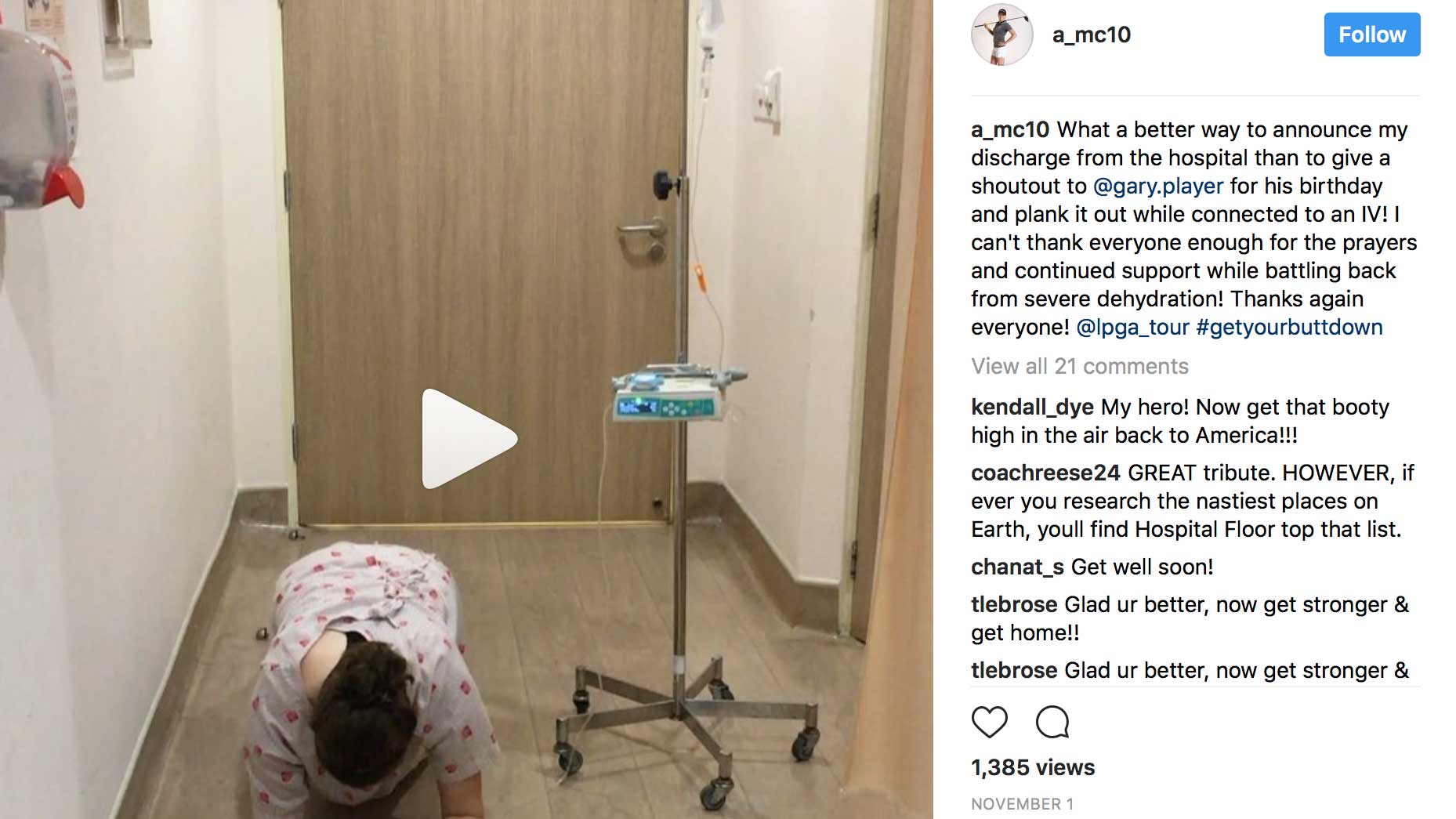 “I really struggled with the decision of whether to come here (Naples) or not,” explained McDonald, who ranks 67th on the money list and qualified for CME. “I felt like I owed it to myself to at least come and give it a shot. I’m definitely not 100 percent and still pretty weak from everything that happened, but we got clearance from the doctors that I was okay to resume all normal activities. I just need to listen to my body and stay hydrated. That’s our main goal this week.”

“I’m absolutely happy to be here and to be able to play,” continued McDonald.

McDonald knows she’s not back to herself yet and still has concerns when she reflects on what happened three weeks ago.

“It was for sure super scary and one of the questions I had for the doctors was should I be concerned that it was golf related at all,” said McDonald. “Once they said ‘no’, you kind of just have to trust and do everything you can to take care of yourself and hope it doesn’t happen again. I plan to follow up with doctors periodically just to make sure everything is okay.”

In the end, McDonald was incredibly grateful for all the people that helped her through an unexpected medical emergency.

“The people with the LPGA – staff and players - were great. I had so many people come visit me in the hospital. They sent someone with Global Rescue out to me in Malaysia and they flew back home with me and they took amazing care of me. Definitely beyond thankful to them for everything.”

While she’s simply happy to be in Naples and have a chance to put a ribbon on her first full-year, McDonald is also proud of how she performed the second half of the season.

“Up until the British Open, I was pretty disappointed with my season and started to feel a lot of pressure,” said McDonald, who finished T16 in Scotland. “The British Open freed me up and let me play more relaxed the rest of the year and then I started to have several pretty good finishes.”

This week, more than the result, it’s about getting back to normal. She’ll focus on two things – fun and staying hydrated.