Lexi Thompson Languishes Lead in N.J., Looks Ahead to N.C.

Michelle Wie will not play the remainder of the 2018 LPGA Tour season. Thursday, the five-time LPGA Tour winner underwent surgery on her right hand and posted the following statement on Instagram:

I think John Mayer once said, “Someday, everything will make perfect sense. So for now, laugh at the confusion, smile through the tears, be strong and keep reminding yourself that everything happens for a reason.” A lot of people have been asking me what’s been going on with my hand and I haven’t shared much, because I wasn’t sure what was going on myself. After countless MRI’s, X-rays, CT scans, and doctor consultations, I was diagnosed with having a small Avulsion Fracture, bone spurring, and nerve entrapment in my right hand. After 3 cortisone injections and some rest following the British Open, we were hoping it was going to be enough to grind through the rest of the season, but it just wasn’t enough to get me through.

So I made the decision after Hana Bank to withdraw from the rest of the season, come back to the states, and get surgery to fix these issues. It’s been disheartening dealing with pain in my hand all year but hopefully I am finally on the path to being and STAYING pain free!

Happy to announce that surgery was a success today and I cannot wait to start my rehab so that I can come back stronger and healthier than ever. Huge thank you to Dr. Weiland’s team at HSS for taking great care of me throughout this process and to all my fans for your unwavering support. It truly means the world to me. I’ll be back soon guys!!!! Promise.

Wie’s injuries have been well documented, the most recent being the right hand injury which forced her to withdraw midway through the first round of the 2018 Ricoh Women’s British Open. In October, she returned at the UL International Crown where she played with a modified swing, which she engineered with her longtime coach David Leadbetter in an effort to play around the pain. The following week she competed at the LPGA KEB Hana Bank Championship where she carded rounds of 76-77-70-73 to finish 66th in what would be her final event of the year.

Wie’s 2018 seasons seemed full of promise. She ended the 2017 season healthy and pain free, despite undergoing an emergency appendectomy in August of that same year. She finished T6 at the season ending CME Group Tour Championship and started the 2018 season right where she left off. She finished 11th in the first two events of the year and in February broke through for her fifth career victory and first win in four years at the HSBC Women’s World Championship.

But as the season progressed, so did Wie’s pain. In March, at the Bank of Hope Founders Cup, she laid out in detail the injections she’d been receiving from her doctor in New York City to treat the ongoing arthritis in her joints. She recorded one other top 10 in 2018 before the pain in her right wrist forced her to withdraw from the season’s fourth major.

Wie did not provide a specific timetable for her return. 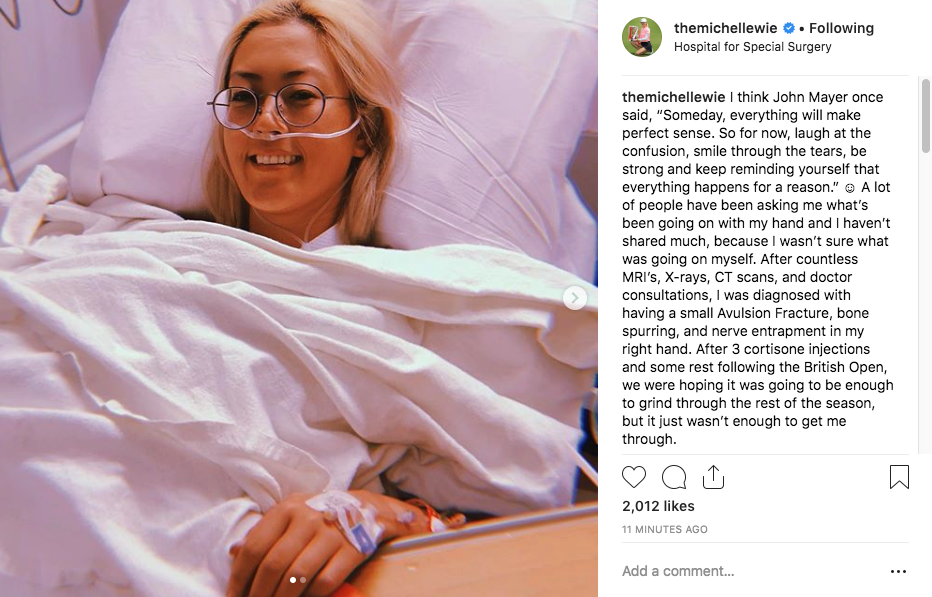