All tee times are in local tournament time (CDT)

This is must-see television. The top two players in the world are paired with the defending champion in rounds one and two. There will be a lot of chatter about the No. 1 ranking in the world and whether Inbee Park can hold on to it. She enters the week just over a half an average point in front of Ariya Jutanugarn. Since the strength of field is so high this week, two through five in the world rankings have a mathematic chance to get to No. 1. Ariya and Lexi Thompson must finish first or second while Shanshan Feng and So Yeon Ryu must win to have any chance. Ariya won the last major, the U.S. Women’s Open, with amazing composure after nearly tossing away a seemingly insurmountable lead.

Speaking of lead, she paces the LPGA in everything from birdies made to scoring average to putting average. Inbee Park has probably been the best when you combine both majors this year. She finished second at the ANA Inspiration and ninth at the U.S. Women’s Open. Now, that’s Inbee being Inbee. She’s only played in nine events this year, but has finished inside the top 31 in each of them. Park is also a three-time winner of the KPMG Women’s PGA Championship. Kang enters the tournament after withdrawing two weeks ago from the ShopRite LPGA Classic and missing the cut last week in Arkansas. However, Kang seemed very enthusiastic and upbeat during her Tuesday press conference.

“I’m super excited to be here,” said Kang, who cleared up the WD by saying she strained a muscle from fatigue but is completely healthy this week. “I’m ready to try and go back-to-back because I’ve been looking forward to this event all year.”

While her results of late haven’t been up to her standards, she finished fifth to open the year at the Pure-Silk Bahamas LPGA Classic and T2 at the HSBC Women’s World Championship. 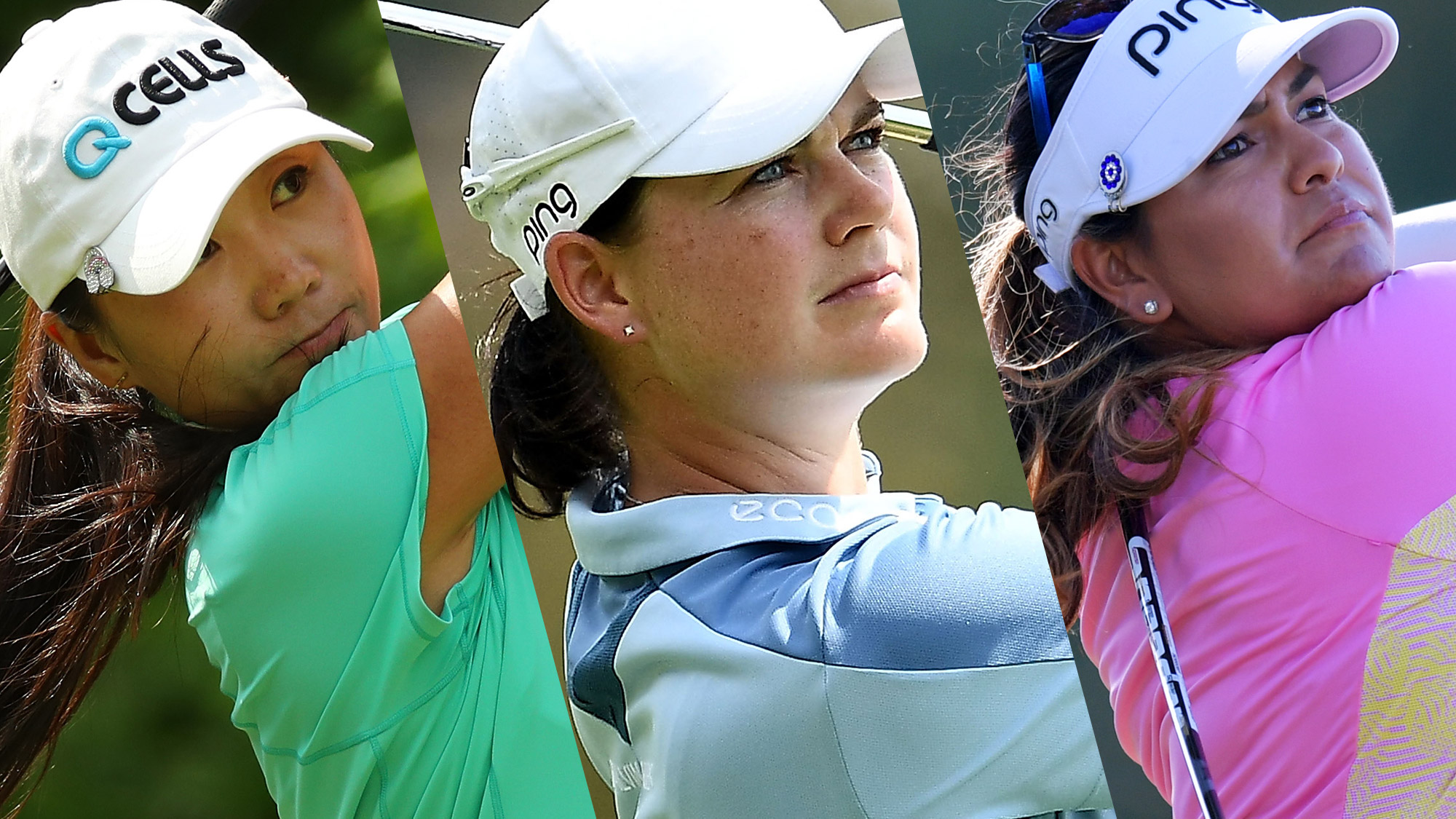 This is an interesting group because all three are playing well, but all three have something to prove. Kim dropped to No. 8 in the Rolex rankings so she is now the fifth highest ranked Korean golfer and would be out of the UL International Crown. She needs to have a good week to pass Hye Jin Choi, who moved to No. 7 in the world with her win on the KLPGA last week. Kim did withdraw after the first round last week, but does have two top five finishes including a solo second at the LPGA Volvik Championship. While Caroline Masson missed the cut last week, she’s playing as well as she ever has on the LPGA. She finished second two weeks ago at the Meijer LPGA Classic and has five top 10 finishes and seven top 15 results this year. Lizette Salas also has a lot to play for this week as she is the sixth highest ranked American and needs a win to have any chance to catch Michelle Wie for the fourth spot on Team USA for the UL International Crown. Salas has played well this year with eight top 25 finishes. She’s contended to win once at the Kia Classic when she finished tied for second. 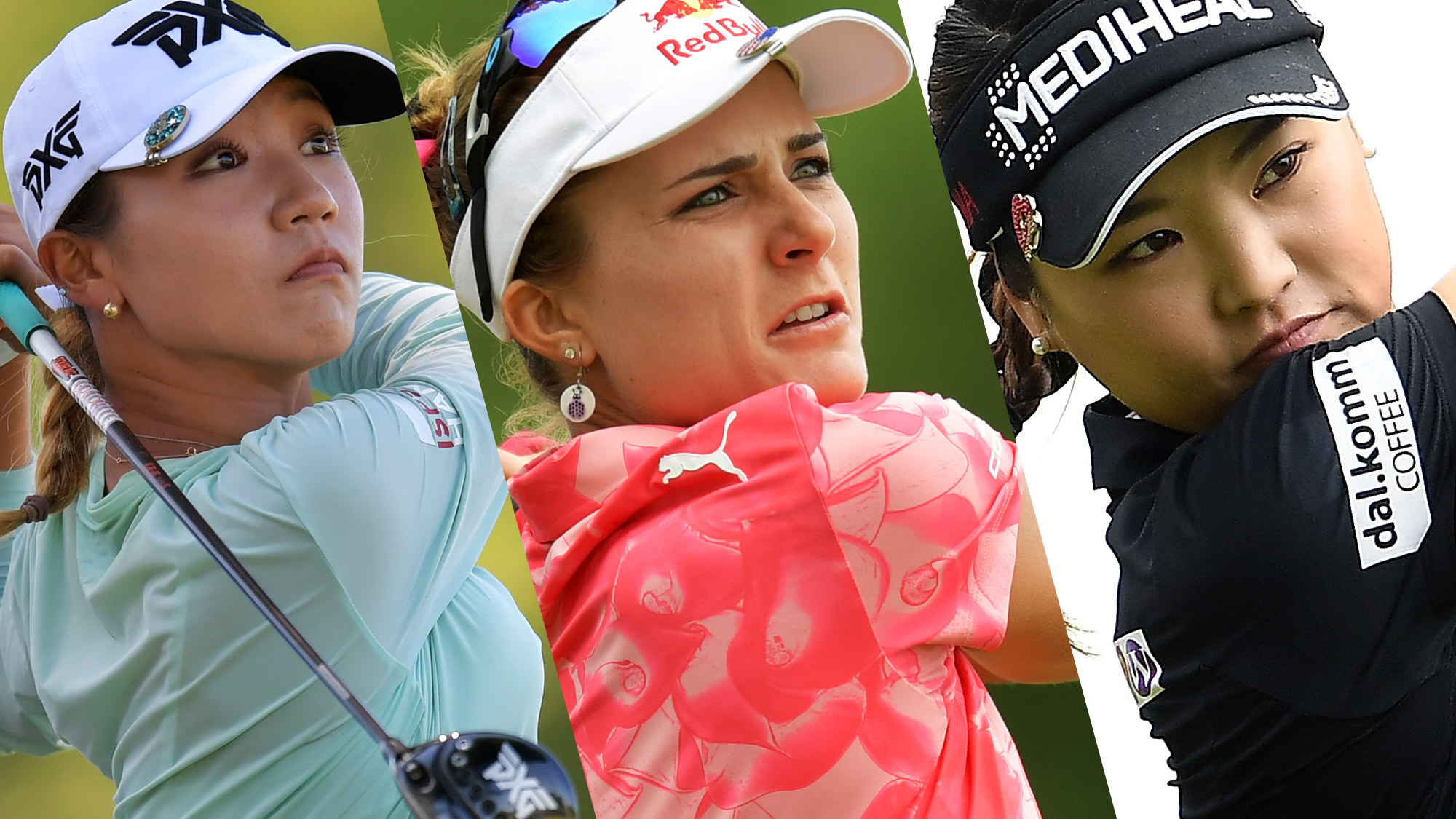 Two of the three in this group have won this year and all three are major champions. Lydia Ko has been under the radar for much of the year, but still has a win and five total top 10 finishes. She has a record of success at the KPMG majors as she lost in a playoff to Brooke Henderson in 2016. She finished T59 last year at Olympia Fields. Ko hasn’t contended yet at a major this season. She finished T20 at the ANA Inspiration and T49 at the U.S. Women’s Open. Lexi Thompson has a chance to go to No. 1 in the world and it’s something she has coveted since the start of the season. Thompson is in great form heading into the third major with a T5 at the U.S. Women’s Open and a T9 and T3 in the last two weeks. She also finished T20 at the ANA Inspiration. Meanwhile, Ryu enters after a win at the Meijer LPGA Classic two weeks ago and a T22 at the Walmart NW Arkansas Championship. Ryu told the LPGA podcast “On The Tee” that her motivation this week is to get closer to the career grand slam. She won the U.S. Women’s Open in 2011 and the ANA Inspiration in 2017. 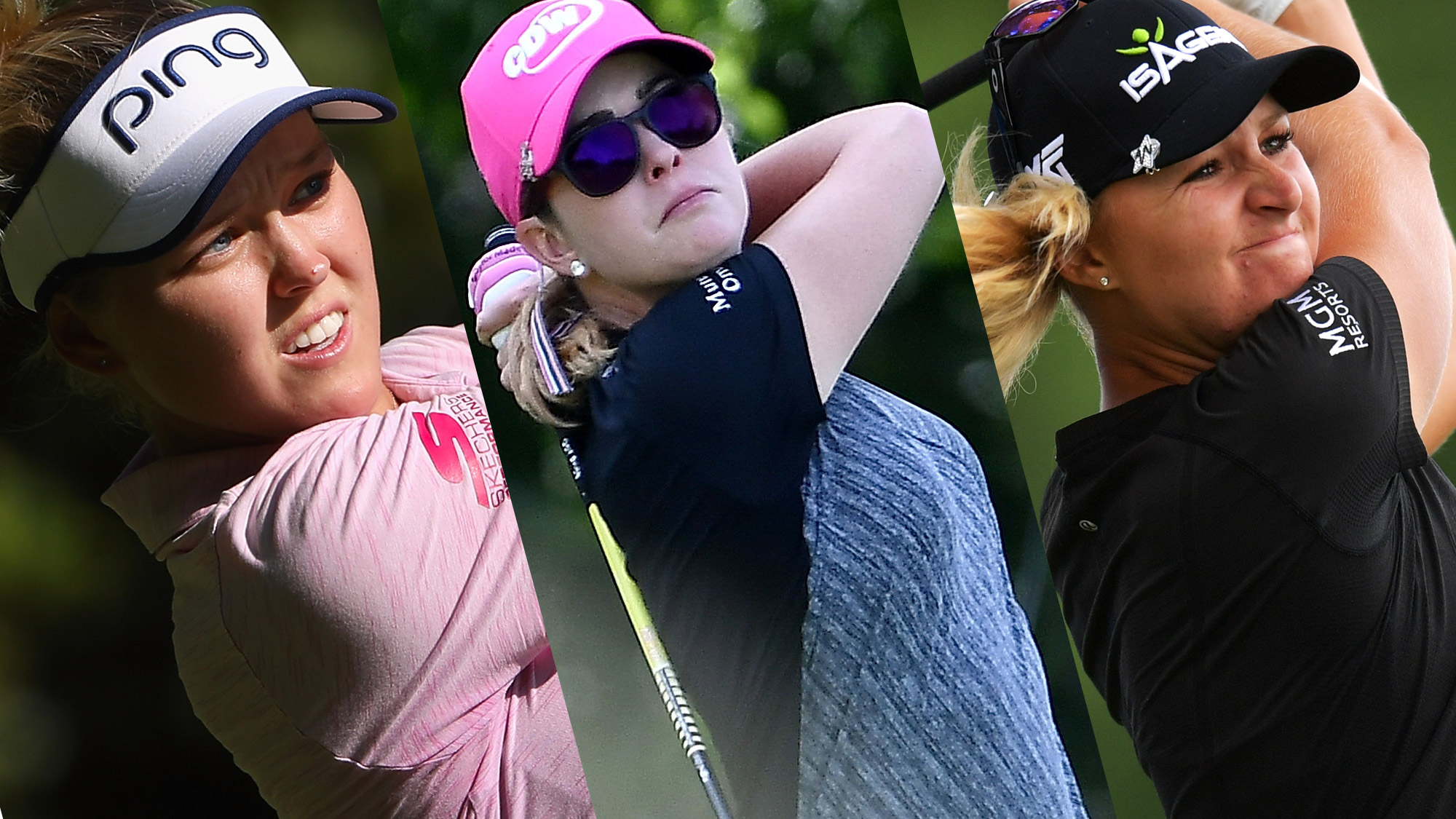 Nobody has played better at the last two KPMG Women’s PGA Championships than Brooke Henderson. She won in 2016 at Sahalee and finished a close second at Olympia Fields last year. Even in 2015, her first KPMG event, she finished in a tie for fifth. Henderson said during her Tuesday press conference that the 2015 sponsors invite was really important for her career.

“It really helped set up the rest of my career because finishing in a tie for fifth gave me a lot of confidence,” said Henderson in the media center. “Hopefully I can keep the positive energy going at these events and we’ll see what happens.”

Not a bad thing to have a T5 be your worst finish at a particular major. Henderson comes in rested as she took the Walmart NW Arkansas Championship off. She’s also coming off defending her CVS Health Charity Classic crown with her partners Keegan Bradley and Billy Andrade. For Paula Creamer, it’s been a transition year as she switched coaches and returned a month into the season from injury. She has missed the cut in three of her last five starts and her best finish is a T23 at the VOA LPGA Texas Classic. All that said, don’t forget that Creamer is a ten-time LPGA winner including the 2010 U.S. Women’s Open. Finally, Anna Nordqvist rounds out the group coming in with back-to-back top 10 finishes. She hasn’t played her best at the majors so far this year as she missed the cut at the U.S. Women’s Open and finished T40 at the ANA Inspiration so you know she’ll want to perform this week. Nordqvist has gone through some swing changes over the last month, but hasn’t elaborated yet. She’s a two-time major champion. 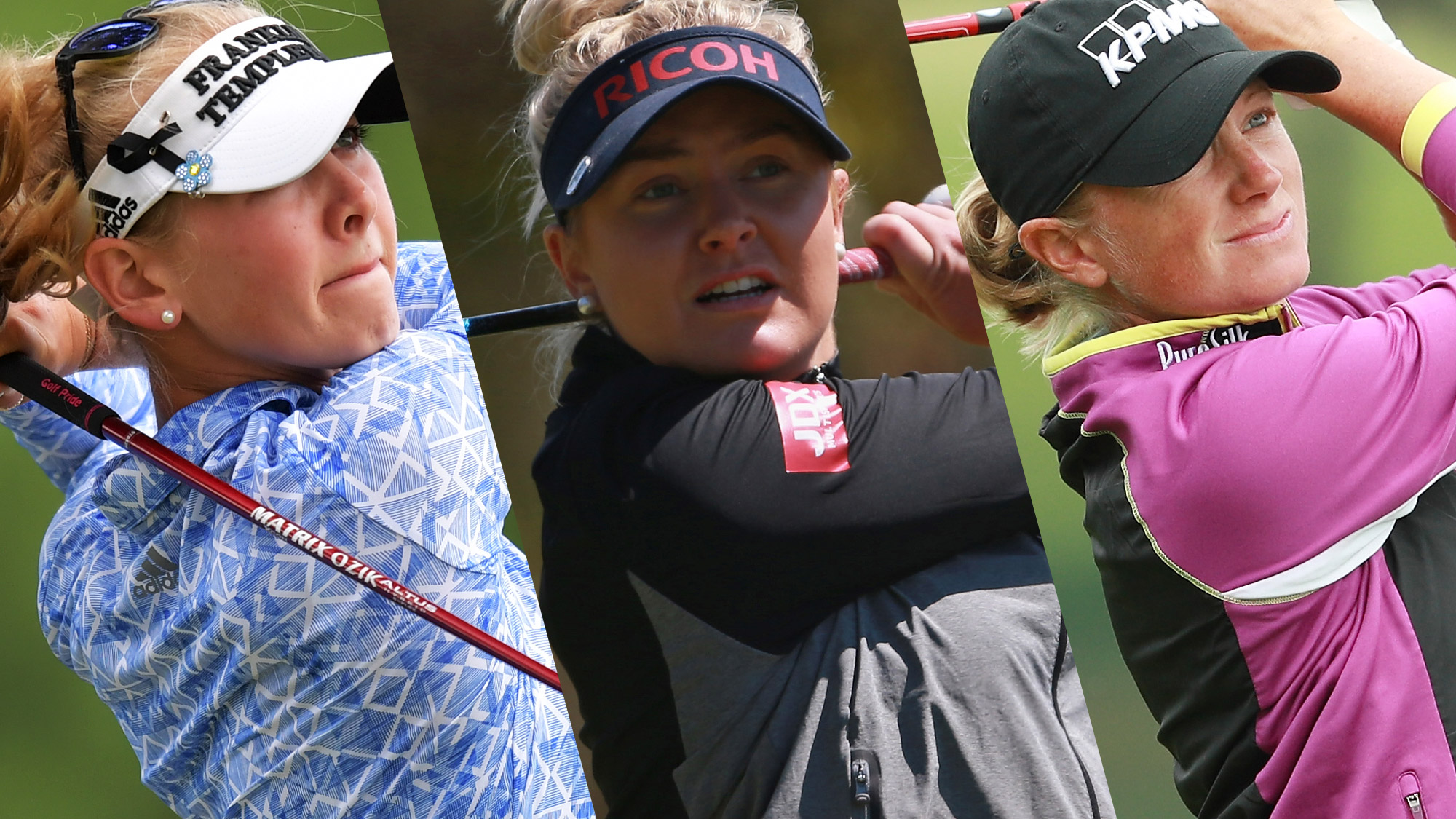 This is an interesting group with just one major champion – Stacy Lewis – but two players that are on the list of “next to capture their first major” most pundits would agree. Jessica Korda has had a strong season with a win and four top 10 finishes in 11 starts. Of late, she has missed the cut in two of her last three starts including a surprising MC at the U.S. Women’s Open. Korda ranks second on Tour in scoring average (69.47) so she has scored very well this year. Charley Hull also has four top 10 finishes and is a proven winner on the LPGA. The Englishwoman also hasn’t missed a cut all year. Hull has been really sharp at the majors this year with a T10 at the U.S. Women’s Open and a T6 at the ANA Inspiration. When the lights shine brightest, Hull’s game responds. You saw that at GolfSixes on the European Tour when she performed well against the men. Meanwhile, Lewis will play in her final major of the year before she puts the club away to prepare for her first child. It’s also the event that she helped bring to life as the face of KPMG on the LPGA. Last month, Lewis finished T7 at the LPGA Volvik Championship so she has still shown signs of being able to contend. However, the majors, which are generally tougher set ups, haven’t been kind to the expectant-mom. She missed the cut at the U.S. Women’s Open and finished T55 at the first major. The two-time major champion wouldn’t mind adding a third.