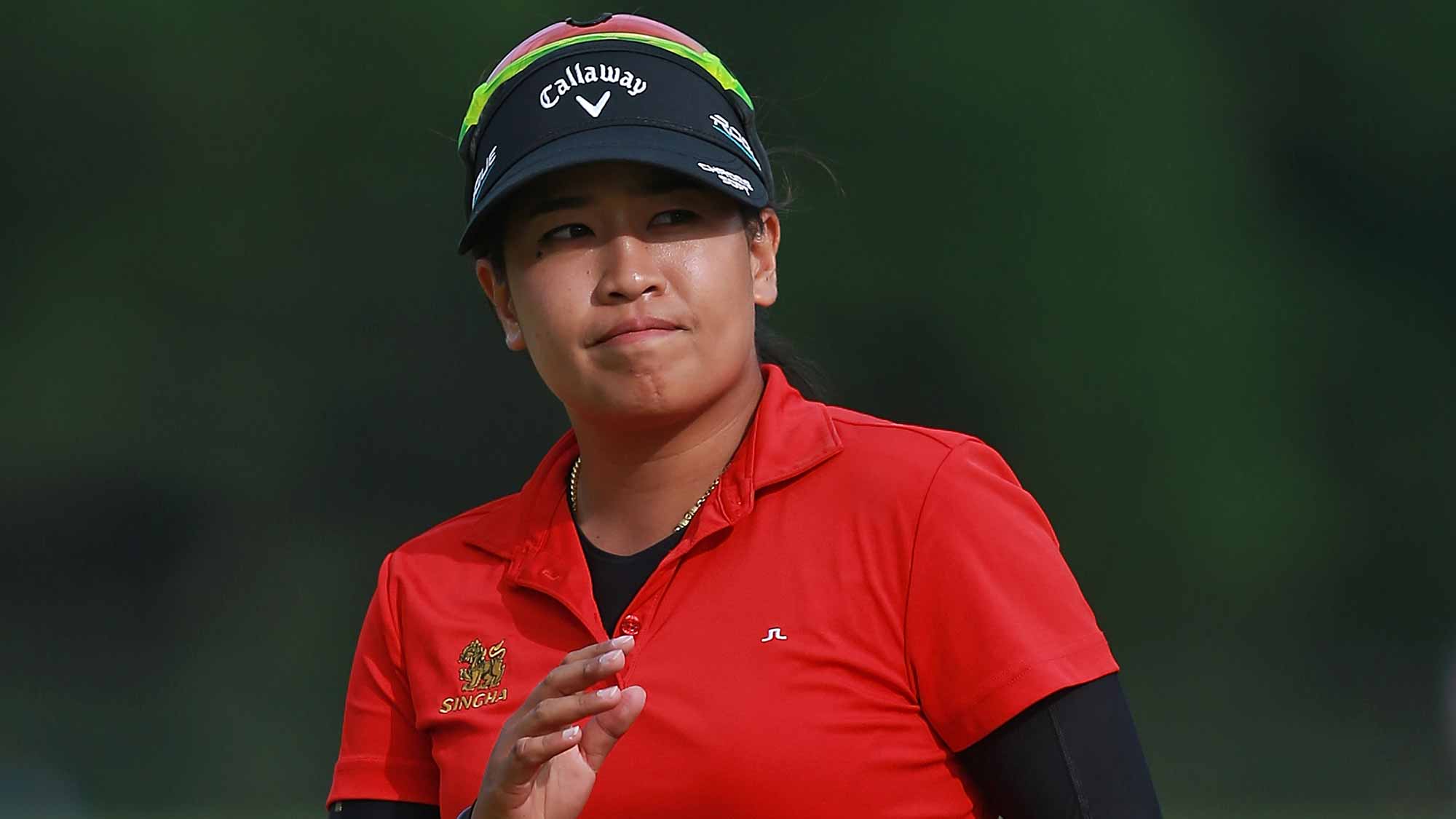 Thidapa Suwannapura broke out of an eight-way tie at the top to take the outright lead on day one of the Marathon Classic presented by Owens Corning and O-I. The Thai fired a 6-under par, 65 to lead by one ahead of defending champion In-Kyung Kim, In Gee Chun, Mirim Lee, Yani Tseng, Jacqui Concolino, Katelyn Dambaugh and Caroline Hedwall.

For much of day one, a round of 5-under par, 66 led the way, but as the afternoon wore on, a group of eight players bunched together at the top of the leaderboard. It was a critical birdie by Suwannapura at the par 5, 18th hole that earned her the outright lead.

“I just want to finish it good,” said Suwannapura about her final birdie. “And I see the TV guys here, and just like, oh, a little bit nervous. But, you know, go do it and make birdie.”

Thursday, Suwannapura took an incredible ride around Highland Meadows Golf Club, where she didn’t record a single par on her back nine. Instead, she made two bogeys and seven birdies. Suwannapura had a total of 10 birdies on Thursday, which is a personal best.

“Oh wow,” Suwannapura said when she learned about her birdies. “After I make bogey, then I know that I have a birdie opportunity, so I just try it and try to keep it on the fairway, in play, and hit it on the green. But most of them I made it. Like, oh, that's good.”

Suwannapura played without expectation on Thursday. Many players took the week off to get some rest, as the Marathon Classic is the ninth consecutive event on Tour. Suwannapura has played the last six events and she is feeling it this week in Ohio.

“I do not expect anything,” said Suwannapura, who had just 23 putts on Thursday. “I know that my body is getting tired. And I have to play 18 holes in the Pro-Am yesterday, too. I'm kind of like, take it easy and not so stressed about my game.”

The Thai is in unfamiliar territory atop the leaderboard as she holds the overnight lead for the first time on Tour and looking to capture her first win. 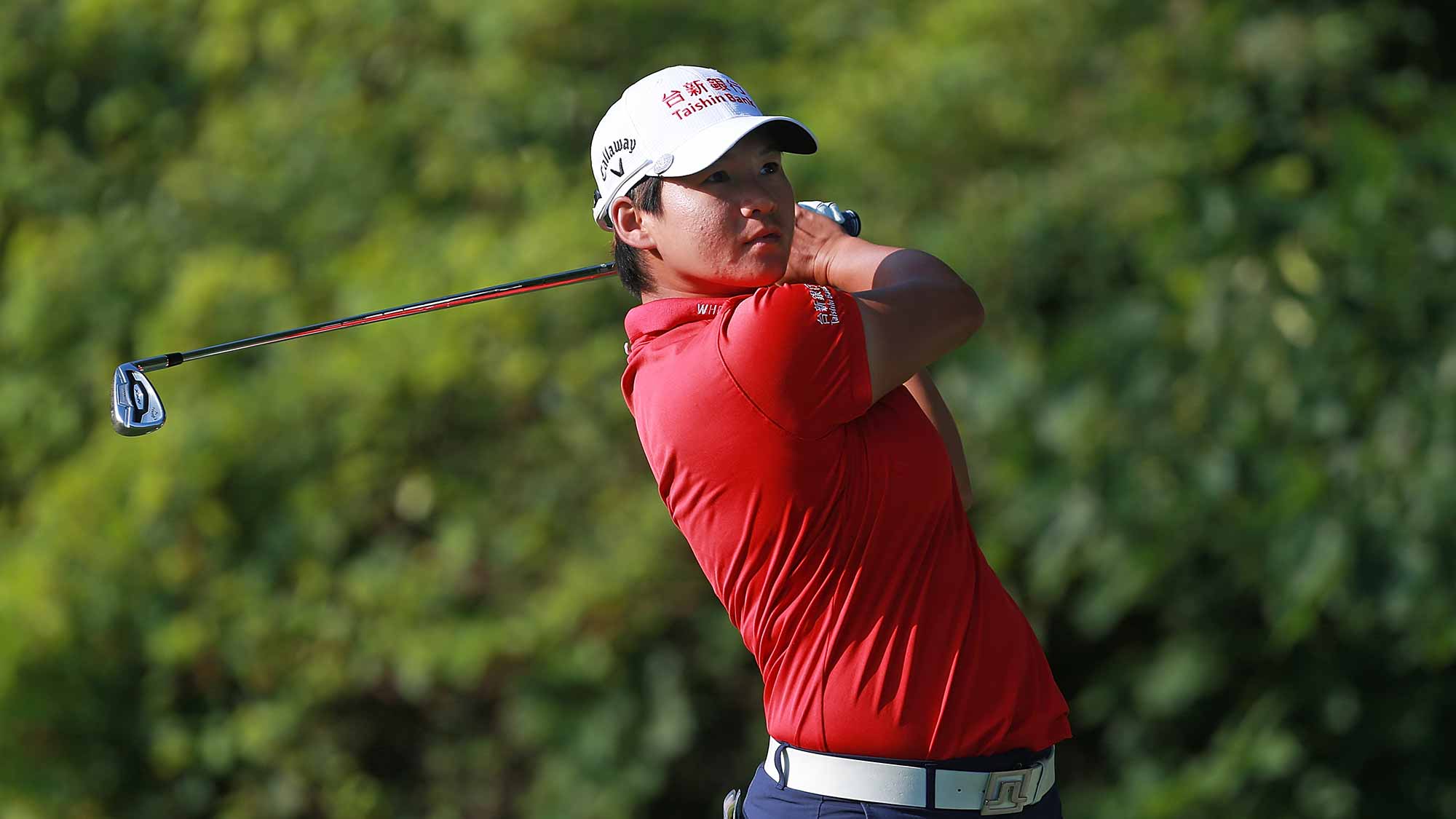 Tseng: “I Know It’s Still In There”

For much of Thursday’s round, Yani Tseng held a share of the first-round lead. It was a first for Tseng in three years on Tour. For a time, the pack included as many as eight players, but Tseng was the only one who was bogey-free for the day. That should come as no surprise given what the veteran has accomplished over her last decade on Tour. And yet, it was unexpected.

Over the last five years, Tseng has contended in just two events. But in her first five years on Tour, Tseng was unstoppable.

Between 2008 and 2012, Yani Tseng accomplished what few have accomplished in an entire career on the LPGA Tour. She amassed 15 titles, including five major victories, ascended to No.1 in the Rolex Rankings, was twice named Rolex Player of the Year, topped the money list and led the Tour in scoring average.

But since Tseng captured that 15th victory at the Kia Classic in 2012, her game has never quite been the same. After Thursday’s round, where she recorded 28 putts, she pointed to her putting as the source of her struggles. Looking at the numbers, she’s right. When Tseng was dominating the LPGA Tour, she was ranked sixth in Putts Per G.I.R. and 20th in Putting Average. Currently, Tseng is ranked 143rd and 158th, respectively, in those same statistical categories.

“I never thought I would have this putting problem,” said Tseng. “I've been through everything, but now I feel like I could write a book about the recipe to success.”

What is that recipe?

“I just want to stay patient, and one day I can still win a tournament,” she said.

Tseng came close to breaking through in 2015, when she twice finished runner-up. She looked poised to hoist the trophy at the Yokohama Tire LPGA Classic in Aug. 2015, where she held the lead on Friday and trailed by two-strokes heading into Sunday. But a 10-foot putt birdie try to force a playoff on the 72nd hole lipped out and she finished one back of eventual champion and first-time winner, Kris Tamulis.

That was three years ago.

“I know it's still in there,” Tseng said. “I just need to keep grinding and stay positive. Just feel like I've still got this.”

After Thursday’s round, the 29-year-old showed the same resiliency that helped her remain at the top of the world for two years. She spoke openly about her difficult journey over the last few years and what has kept her pushing through the difficult times. It has been the belief that she can still be the dominant player she once was. Perhaps a slightly older and more mature version, and maybe, even better than before.

“My game [is] better, my skills [are] better, my swing is better than when I was playing my best,” Tseng said. “But I feel like it's more about the process now. I know if I stay patient, the results will come.” 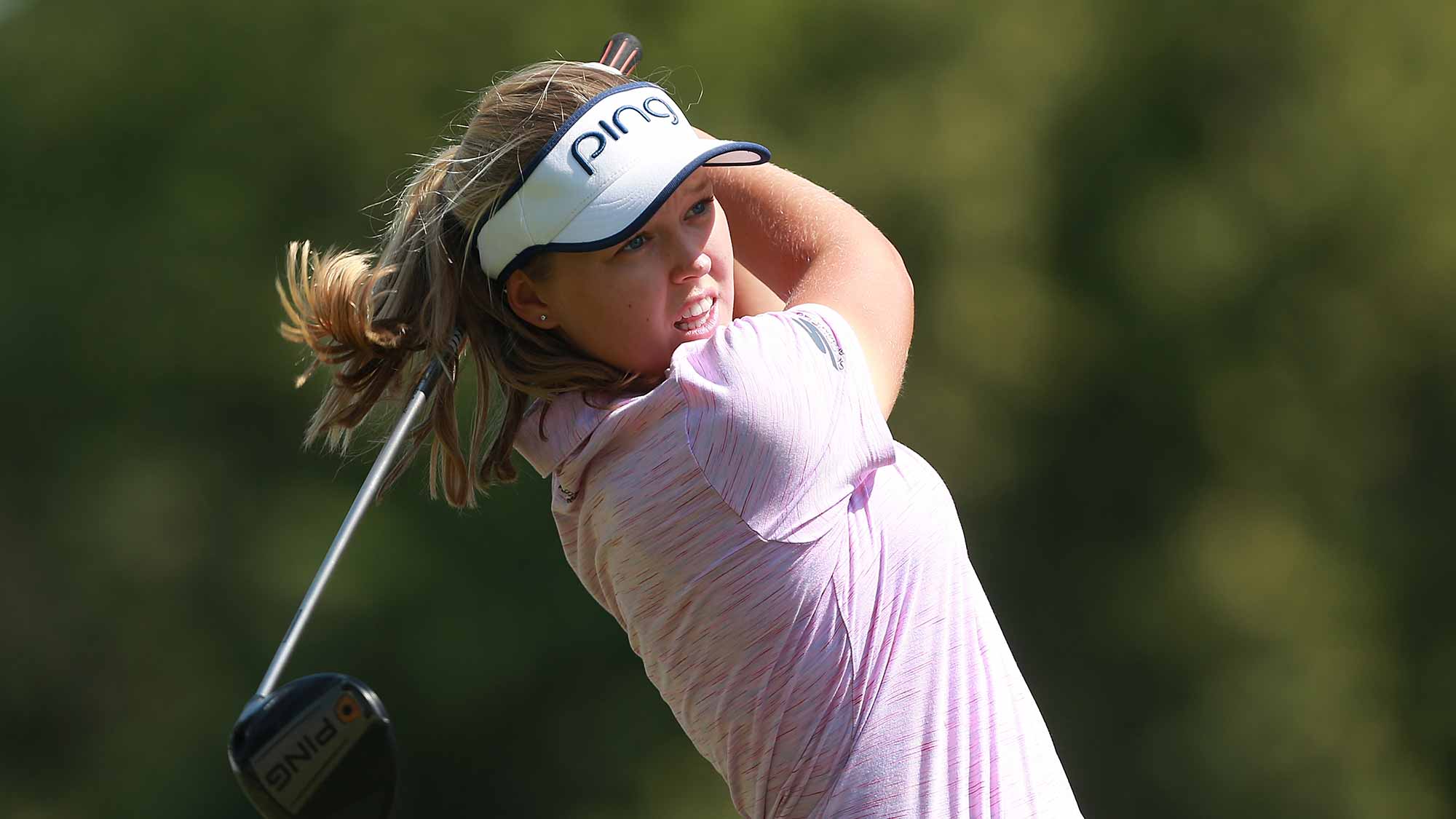 Jack Nicklaus was notorious for remembering only the positive shots from his round. Those moments that weren’t so desirable? That’s when Nicklaus used selective amnesia. They were out of his mind.

This week, Brooke Henderson followed the Golden Bear’s lead. She forgot about her history at Highland Meadows Golf Club and it paid off. Thursday, the Canadian posted a 4-under par, 67 for her low round in Toledo. She sits two back of the lead.

“This year, I just tried to keep things really simple,” Henderson said after her round. “I tried to just look over the golf course with fresh eyes and try to forget everything that's happened before and just try to play smart, try to give myself a lot of birdie opportunities,”

In two prior starts, Henderson had just one sub-70 round. She finished T38 in 2016 and, after a second round 75, missed the cut in 2017. It’s surprising Henderson hasn’t had more success at Highland Meadows, a tree-lined course that is much like the courses the Canadian has conquered in her six wins on Tour. But the course’s difficulty tends to sneak up on her.

“When things are going well, it's like super easy,” Henderson said about the course. “And when you mishit like one little shot, you can run into a lot of trouble, so it is kind of sneaky hard. You always have to stay focused. You can't really take a break. But with that being said, there are a lot of birdie opportunities, so you can go really low.”

Thursday, Henderson made five birdies and one bogey. But the birdies are what Henderson will remember.