Canadian Denise Hill has been nominated as the first award recipient for the LPGA’s XL Catlin Volunteer Service Award – a new program launched in 2018 to recognize exemplary volunteers at each LPGA tournament.

Currently in her sixth year as a volunteer at the Pure Silk Bahamas LPGA Classic, Hill was nominated by tournament representatives and will be presented with a service award plaque during tournament week, Jan. 25-28.

In addition, Hill will join other tournament volunteers nominated throughout the year for a season-ending random drawing that will award a donation of $10,000 in the winning nominee’s name to the charity of the tournament for which the volunteer serves. The tournament charity for the Pure Silk Bahamas LPGA Classic is Sister Sister Breast Cancer Support Group.

“Denise is the type of volunteer who takes initiative and is willing to go beyond the call of duty to make the tournament the best it can be,” said Selina Maddox, volunteer director with Global Golf Management at the Bahamas event.

“She brings a positive attitude and a personal touch in working with her committee, and Denise gives selflessly to make sure the tournament is a positive experience for the players, staff and other volunteers,” added Maddox. “Her high energy and bright smile encourages everyone with whom she comes in contact, both before and during tournament week.”

The native of New Brunswick, Canada moved to the Bahamas in 1995 to work for Cable Bahamas. Now retired, she spends her free time playing golf, boating and volunteering for the LPGA event.

Hill took up golf in 2008, when she both retired and remarried. Her husband, Glenn, was a golfer and encouraged her to take up the game.

It wasn’t long before she was playing golf at The Ocean Club Golf Course – host venue of the LPGA’s event in the Bahamas -- as well as at Canada’s Gowan Brae Golf & Country Club in Bathhurst, New Brunswick, where she returns during the summer months.

Global Golf Management and the staff at the Ocean Club were recruiting volunteers to help with the LPGA’s tournament in the Bahamas, which started in 2013. Hill signed up to help that year with player registration. Both she and her husband also signed up to volunteer as walking scorers.

Hill was asked to become the chairperson for player registration in 2014 – a role she still has. And for the last several years, Hill has also volunteered for the tournament’s pro-am registration.

So why does she keep coming back to volunteer each year? Hill admits her favorite thing is the “long hours and the chaos for one week.” 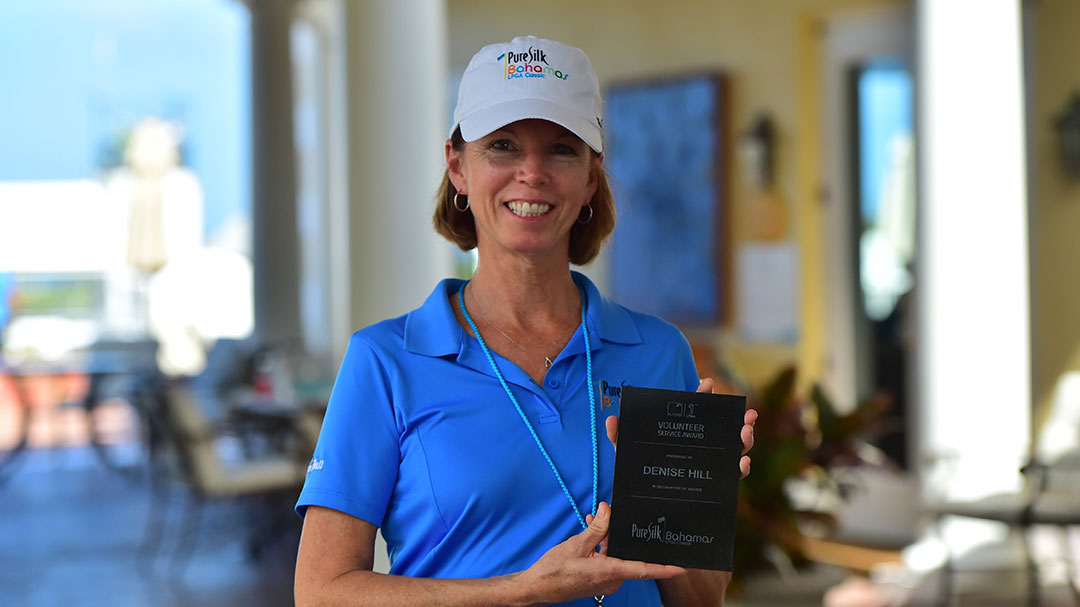 And when the LPGA kicks off its season at the Caribbean event each year, the tournament is a chance for Hill to meet and greet players she has come to know over the years, as well as the rookies who are launching their LPGA careers in the season-opening event.

”Registering the players has given me a great opportunity to get to know them on a more personal level, and as a walking scorer, I’ve had the chance to watch the world’s best women golfers and witness the dedication they have to the game,” she added.

Prior to her 2013 involvement as a volunteer at the LPGA’s Bahamas event, Hill had never followed the LPGA nor attended any LPGA tournaments. She now calls herself a “fan.”

“I think the LPGA does a lot to increase the involvement of women and young girls to golf, as well as contribute to the overall growth of the sport through clinics, scholarships and other programs,” added Hill, who plans to move back to Canada later this year with her husband, a native of Newfoundland.

When asked what has been the highlight of her involvement with the tournament in the Bahamas, Hill points to playing in the pro-am with LPGA players Brittany Lang of Texas and Japan’s Ayako Uehara.

In January 2017, manufacturer Titleist was filming a commercial at the Bahamian venue following the tournament. Hill and another volunteer showed up at the ad shooting wearing their Titleist hats and were asked to “hang around as extras” for the commercial.

She tries not to pick favorites when it comes to the players. Hill admits she enjoys engaging with many players from around the world, which is perfect at an LPGA event with a global player roster.

But Hill admits she has a special fondness for one player from north of the border.

“If forced to choose one player, I would have to say Brooke Henderson,” said Hill. “She is an incredible athlete, but she is also kind-hearted, down to earth and interacts with her fans and the volunteers -- plus, she’s Canadian!”

The mother of two adds that she is honored to be nominated in the inaugural year of the XL Catlin Volunteer Service Award. And if she is fortunate enough for her name to be drawn at the end of the year, she will be thrilled to share the honor with a deserving charity.