Get Ready for Moving Day at the U.S. Women's Open Conducted by the USGA

Get Ready for Moving Day at the U.S. Women's Open Conducted by the USGA

Jessica Korda carded a career best U.S. Women’s Open round of 68 to sit at (-5) for the tournament, as she sits one shot away from the leader, Mamiko Higa (-6). Celine Boutier rallied this morning to finish at (-5), joining Korda in the final pairing.

Gina Kim is the leading amateur of the event after winning the NCAA Team Championship with Duke last week. Kim entered the day at (-5), fell to (-3) through her fourth hole of the second, then battled back to (-5) until the final hole, where she bogeyed to finish at (-4).

Jaye Marie Green and Jeongeun Lee6 sit two shots behind at (-3), with Green and Lee6 playing polar opposite golf coming into the week. Marie Green went into detail with LPGA.com how playing a major reverted her game after missing four straight cuts, while Lee6 is well in front on the Louise Suggs Rookie of the Year race with her strong first season on the LPGA Tour. 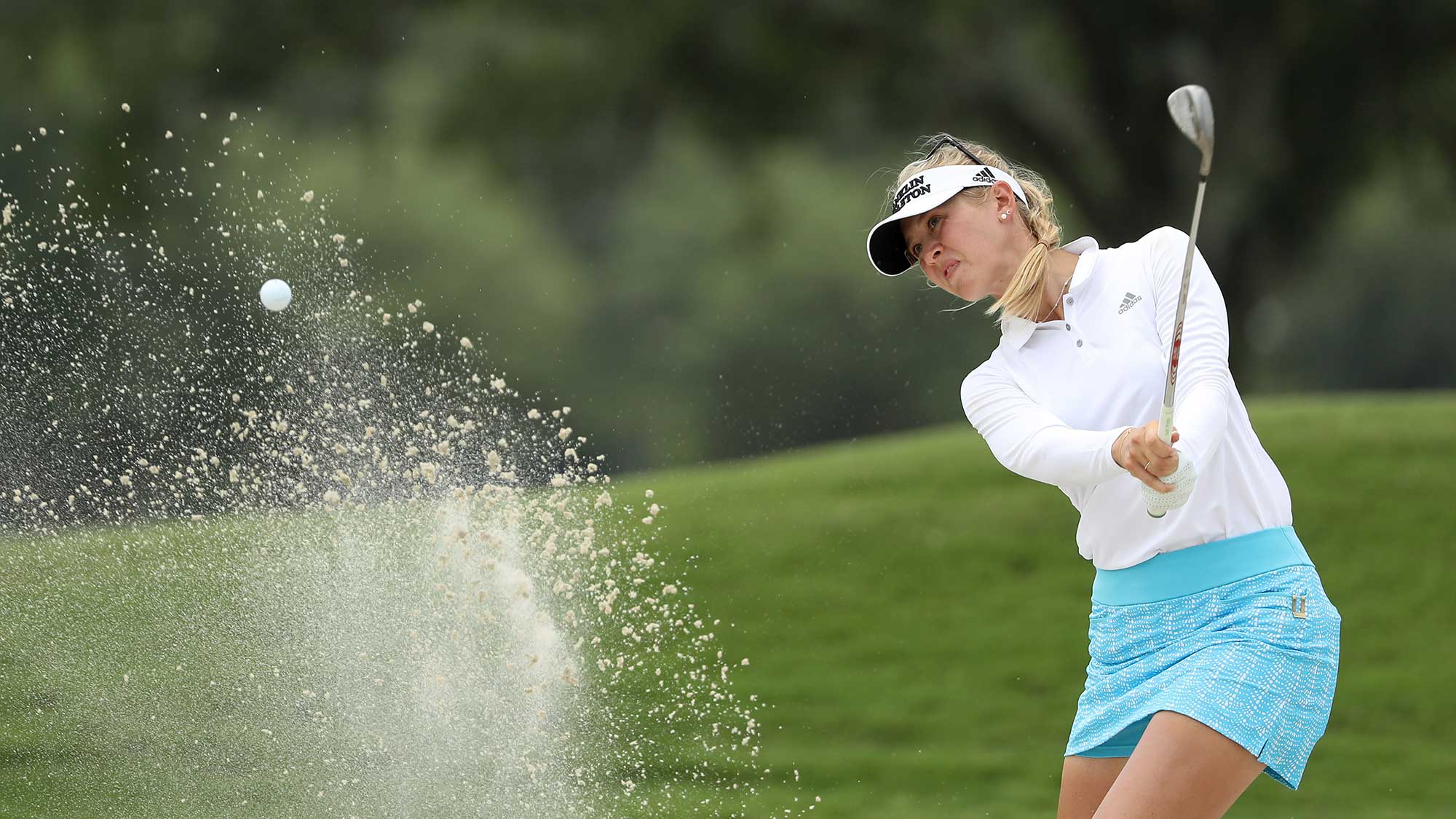 Mamiko Higa has led through 36 holes, shooting an even par 71 in round two to sit at (-6). Her peerless opening round so far this tournament came bogey free in the morning conditions, which will no longer be with her in the final pairing of moving day. The five-time winner on the JLPGA most recently won in March at the Daikin Orchid Ladies Golf Tournament.

Korda is making her 12th U.S. Women’s Open appearance, and is at her career best of (-5) through the opening 36 holes. She’s only recorded one bogey and one missed fairway at the completion of two rounds. Korda is the leading American in the tournament, and would be the first one to win a U.S. Women’s Open since Brittany Lang in 2016. She would join her sister Nelly as the only two Americans to win on tour this year, with the younger Korda winning in Australia. Korda has done most of her work on the three par 5’s on the par 71 track, as she sits at (-4) on them through the first two rounds.

Celine Boutier posted a (-4)  first round, then nearly gave it all back in her first eight holes of the second round. A double at the difficult par 3 11th and a bogey at the 16th, the Rolex First Time winner this year birdied the 18thto turn her momentum around.  She played the front nine, her final side of the day, at (-3), to sit a shot off the lead. Through 36 holes, Boutier has 10 birdies, but the 11th has been a thorn in her side. She’s at (+3) on that reverse redan par 3. An improvement there gives Boutier a strong opportunity to add her first major of her career in the same season she won on the LPGA for the first time. 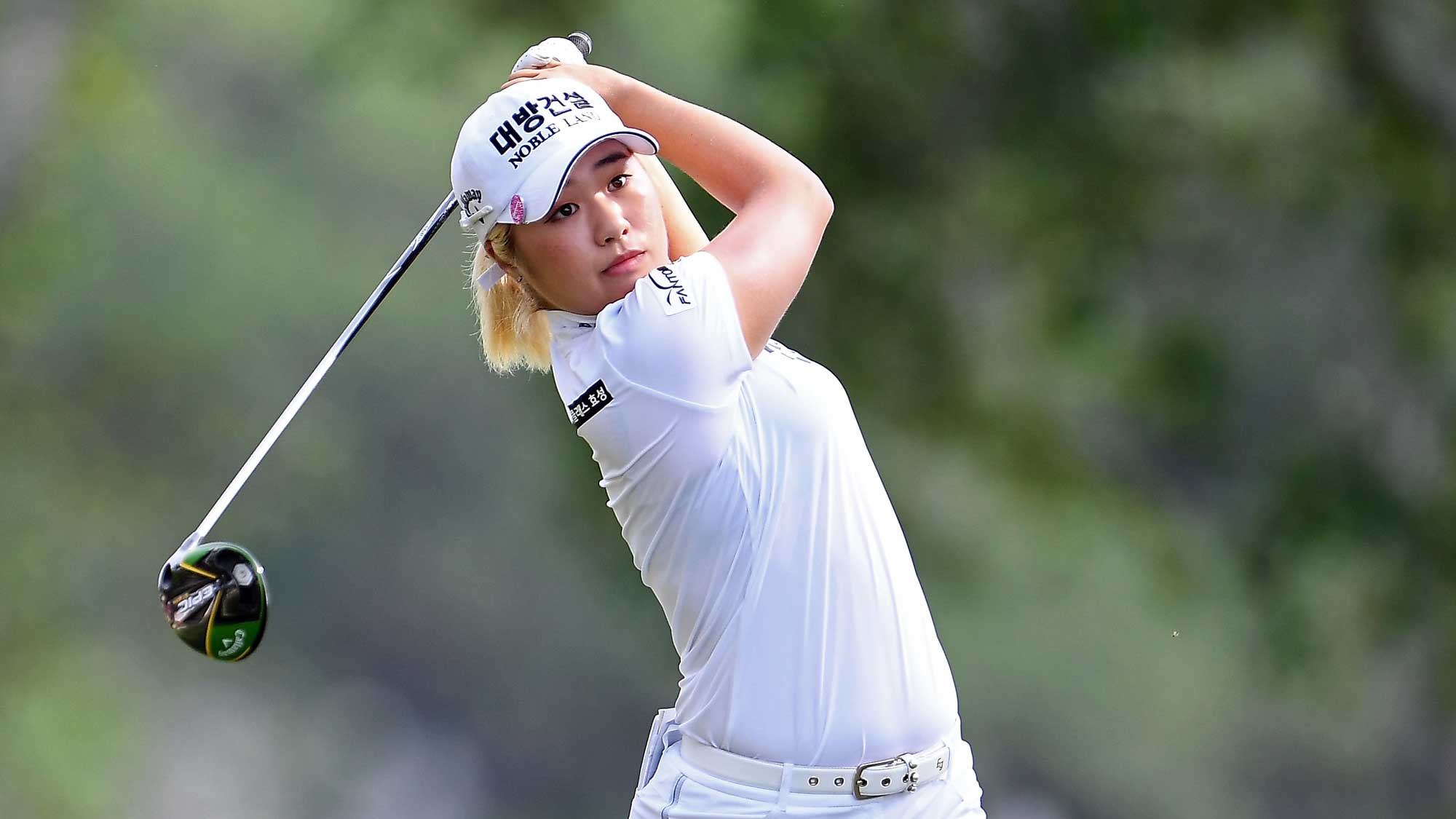 Gina Kim, the sophomore from Duke, told the media in her post round interview Friday that she struggled to sleep before her second round. That explained her dip in play early, as she bogeyed her first and fourth holes. She stumbled but didn’t fall, as she rebounded with a (-1) back nine to get back into contention. Her combined score of 138 through two rounds is tied for the second best out of an amateur in U.S. Women’s Open history.

Jeongeun Lee6 has been and continues to be the staple of consistency in her rookie year. Since turning pro, Lee6 hasn’t missed a cut. Her worst finish was T26 last week at the Pure Silk Championship. Her best finish at a major was before she joined the LPGA, a T5 finish at the 2017 U.S. Women’s Open. That was also the last year a rookie won the U.S. Women’s Open, when Sung Hyun Park won in her maiden season. Lee6 has already been close to victory this season, with losing in a three-way playoff to Sei Young Kim in Daly City at the LPGA MEDIHEAL Championship.

Jaye Marie Green is looking to continue improving at majors, as she has at her last three. She finished T18 at the 2018 KPMG Women’s PGA Championship, T15 at the Ricoh British Women’s Open, and T12 at the ANA Inspiration this year. She’s having a strong bounce back performance after missing four consecutive cuts heading into the week. Green is in the hunt for her first LPGA victory. 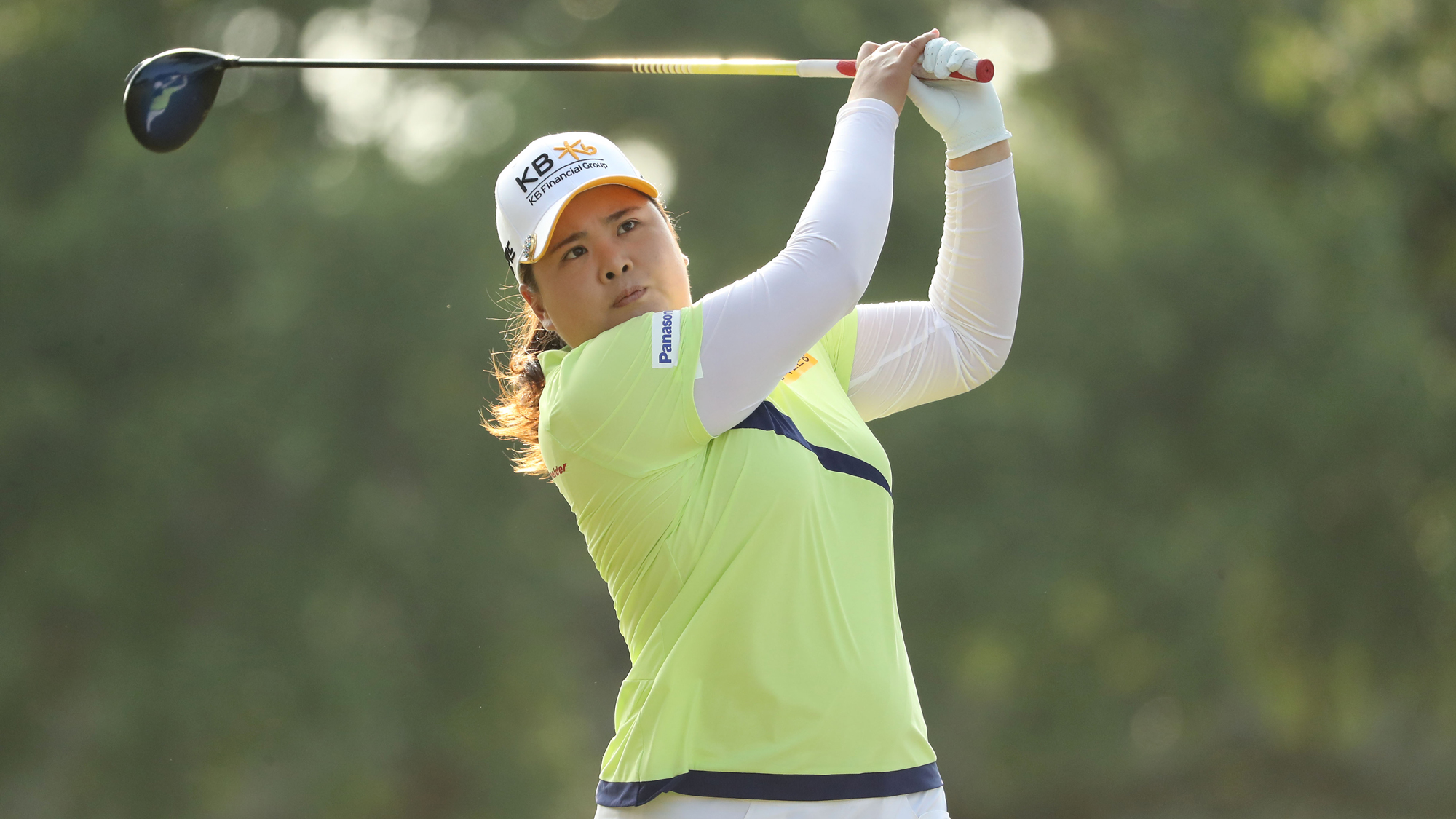 As Golden Hour struck at the Raynor design of the Country Club of Charleston, a roller coaster arrived for Minjee Lee. After fighting to (-2) for the tournament after a triple at the 11th knocked her back to even par through 47 holes, she gave a shot back at the final par 5 of the day with a wedge that flew over the green. Lee, with a win and Jin Young Ko finishing no better than solo 8th, can become the first Australian to become the Rolex Women’s World Rankings No. 1 Player with her idol Karrie Webb in the field.

Hall of Famer Inbee Park put on a show down the stretch of her final round, birdieing three out of five holes from the 9th through the 13th. The strong run was derailed by a double at the 16th, but the two time U.S. Women’s Open Champ responded with a birdie at the 17th to sit at (-2), four back of the lead with two rounds to play. In a similar scenario to Lee, a third U.S. Women’s Open victory would vault Park to the Rolex Women’s World Rankings No. 1 if Ko finishes worse than 8th.

Yu Liu posted an even par second round to remain at (-2). The second Duke graduate to be near the top of the leaderboard alongside Kim, Liu has yet to enter the winner’s circle on the LPGA tour. In her first appearance at the U.S. Women’s Open conducted by the USGA, she’s also searching for her second career top 10 finish in a major. All three members in the group sit T10 heading into Moving Day. 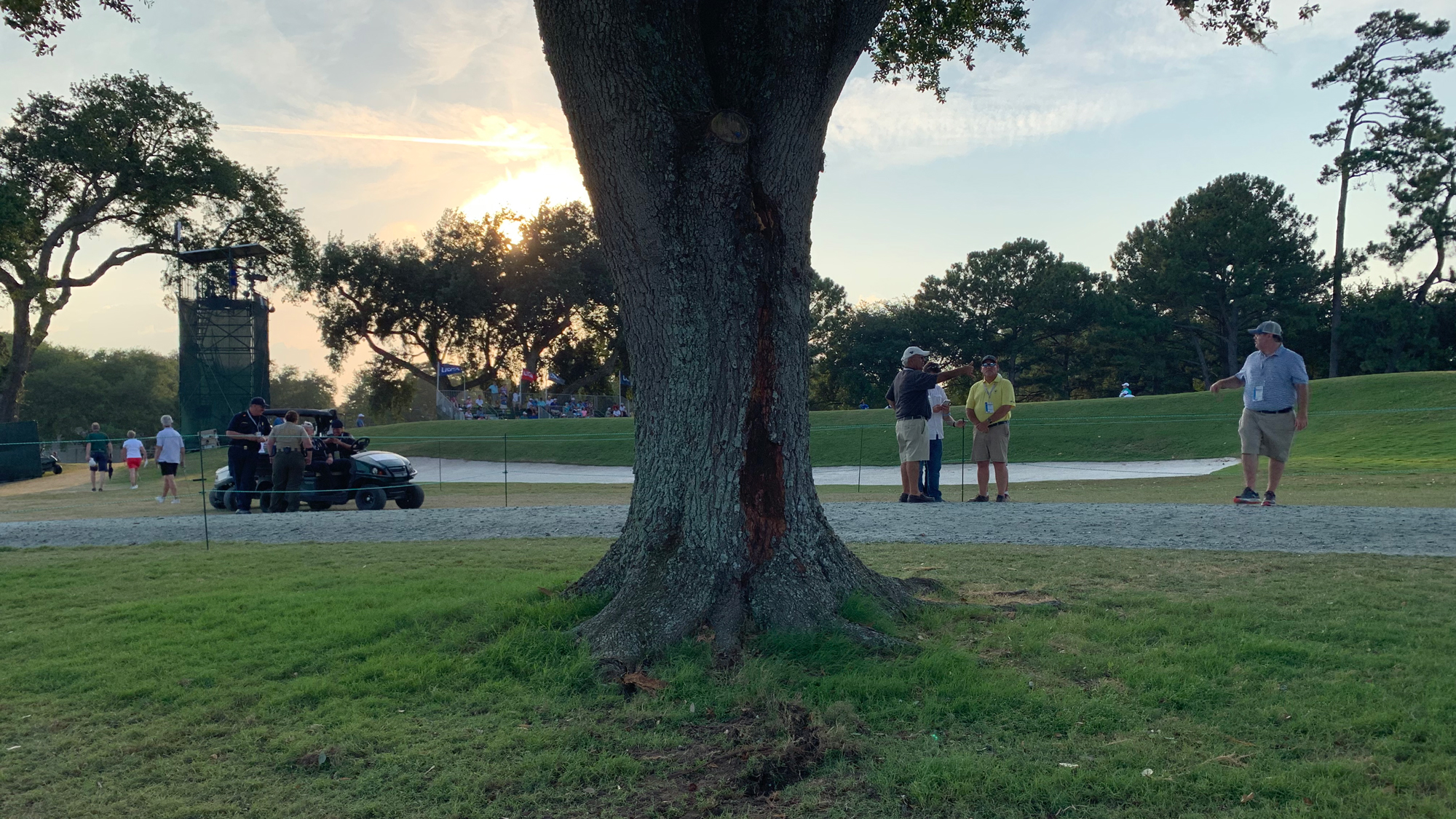 45- The number of players who had to head back out Saturday morning to finish their second round.