Jin Young Ko was five years old when Tiger Woods went on one of the greatest streaks in the history of the game of golf. Woods posted 110 consecutive holes without a bogey.

At the start of this week before the beginning of the Cambia Portland Classic, Ko noted “I will try to keep the bogey-free run. I hope so. But nobody knows about how can I play, how can I play the course.”

She left no doubt about her ability to play Columbia Edgewater Country Club at the start of the week, sitting at four under through the opening eight holes.

The streak would end in stunning fashion, with the Rolex Women’s World Rankings No. 1 shocked at the missed three-foot putt on nine. She etched her name into the history books nineteen years after 114 consecutive holes without a bogey, going back to the third round of the AIG Women’s British Open, a moment she couldn’t have possibly imagined when Woods set the bar. She went 41-under over that stretch, including 34 holes of major golf.

This historic moment in the lore of golf all began with a phone call.

“After the KPMG first round, when I shot five over, I called my coach and said, ‘Can you come?’” Ko explained to LPGA.com.

Since turning 24 on July 7th Jin Young Ko has made four starts. Her finishes have been: a win at the Evian Championship (her second major victory of the season to go with the ANA Inspiration she captured in April), a win at the CP Women’s Open, a second-place finish with Minjee Lee at the Dow Great Lakes Bay Invitational and a third at the AIG Women’s British Open.

Along the way, she captured the Rolex Annika Major Award and has a commanding lead in the Rolex Player of the Year and Vare Trophy race.

This wasn’t a single-round cry for help. Ko was in the midst of a bad patch by her standards. While many players on the LPGA Tour would gladly have taken the stretch she was on, which included six straight top 25 finishes, the highlight was a T5 at the HUGEL-AIR PREMIA LA Open.

Ko set a high bar for herself at the beginning of the 2019 campaign. Over her first six events, she had five top three finishes, including victories at the Bank of Hope Founders Cup and the ANA Inspiration. It was this stretch that first brought her to the top of the Rolex Rankings.

Playing five consecutive weeks in the months of May and June, from the Pure Silk Championship to the Walmart NW Arkansas Championship, knocked her off her dominant form.

Her coach, Si Woo Lee, agreed to see her and Ko booked travel to Chicago after the five week stretch. In the scorching heat of a Midwestern summer, they stood on the range and worked on a subtle weight shift.

Ko tediously and diligently worked on the change. “Maybe seven hours a day for five days,” she said of the work she put into the minor fix. “It was a lot of practice with the coach. But we fixed the swing a little bit.”

That little adjustment brought the juice back to Ko’s game and put her on a historic course.

With the two weeks in Chicago, along with celebrating her birthday with a nice dinner alongside her manager, Ko returned in dominant fashion. She posted a best ball 58 alongside Minjee Lee at the Dow Great Lakes Bay Invitational’s final round.

“After the break, she was dialed in, flagging it with her irons. Her batteries were recharged,” her caddy, David Brooker, explained.

“Driving distance went up, and it was straighter. It was also easier to control the fade,” Ko noted of the results of the change.

Her caddy has been in awe of the performance, “It’s like a computer game, like playing Golden Tee,” Brooker explained.

“She doesn’t feel the need to hit anything other than dead straight.” 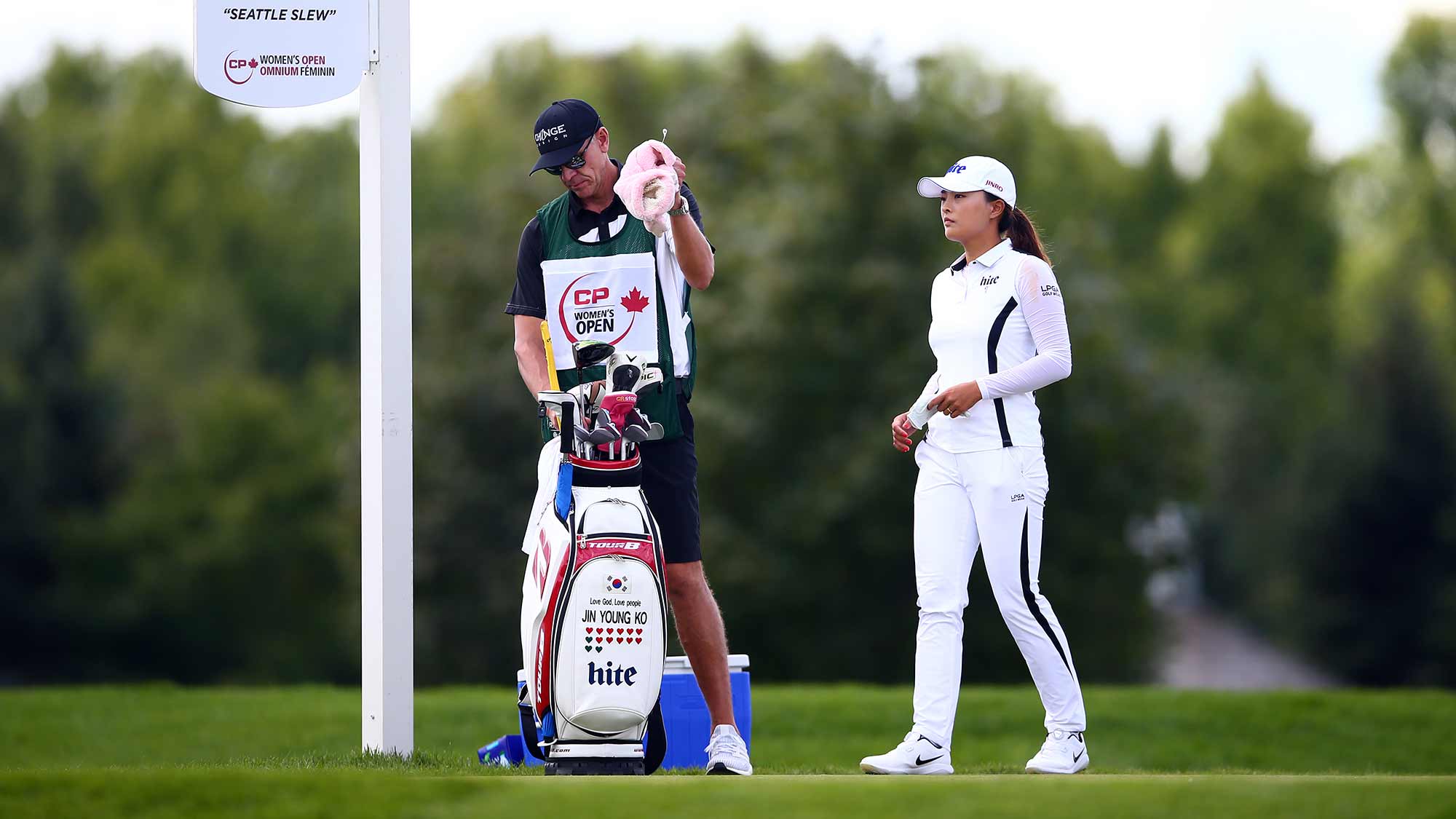 That approach has been good for four wins in 2019. Ko accounts for those with hearts on her bag, one for each win in her career - red hearts for non-majors, green or blue for her major victories.  She also has 10 wins on the KLPGA, including one major.

She currently has 14 hearts. The CP Women’s Open victory hasn’t been added. When Ko returns to Korea, she will get an updated bag that she hopes will have 16 hearts, if she can add one more win at the Cambia Portland Classic.

“She’s got some real belief in herself,” Brooker notes.

That belief has helped her maintain her strong self-confidence. After the first round, Ko explained of what bogey streak she’ll keep in mind next.

“I did 114 holes and then done. It's cool, especially I did new record, something like that. So I want to do again, 115 holes bogey-free round hopefully. But yeah, I'm free. I'm freedom, yeah. I can feel it.”

That freedom allows Ko to continue to build on the historic 2019 campaign, one that couldn’t have been seen when Woods left his mark.