At her first junior tournament LPGA rookie Alana Uriell ever played in, her mother dropped her clubs off at the bag drop. As Uriell got out of the car she asked, “Aren’t you coming Mommy?”

Uriell’s mother Barbara Ann helped get her to the LPGA Tour. As she’s set to tee off at the Kia Classic this week, hosted by her home course, her mother won’t be with the Carlsbad native the rest of the way. She passed away from breast cancer when Uriell was 14.

Finding the Game of Golf

The Uriell family was out to dinner, with a long wait ahead of them at a Trophy’s restaurant. They walked over to a Sports Authority nearby, heading to the artificial putting green. With Uriell and her younger brother Connor dawdling on the artificial surface, an idea struck their mother.

She’d buy them golf clubs, so that the kids could play with her brother.

The very next day, both kids had their first sets of clubs. At the age of eight, Uriell struggled to make contact with the ball. Her father, Patrick Uriell, built her a net in the backyard so she could practice her swing.

“She would swing and swing and not hit the ball. She finally got it and could see in her eye, she had a serious look like she was having a conversation with the ball,” Uriell’s father recalled at the start of her golfing career.

As Uriell’s game grew, her mother took her under her wing. Having already successfully trained her daughter to be an All-American cross-country runner at the age of nine, she taught Uriell to believe that dedication combined with natural ability could take her far. Once Uriell bought in, “They were off and running, like two little kids,” her father explained, with a reminiscent smile.

Uriell would begin to find her game at executive courses. As she continued to grow, reaching her mother’s height at the age of 12, she developed her abilities and increased her practice routine. She found her coach, Jason Puterbaugh, who taught out of Aviara Golf Club. Her Mom would pick her up from school with a change of clothes for the course, going nearly every day for Uriell to practice.

“She had a kind of light, an energy about her that really kept me going in hard times and it was really nice to be around,” Uriell described her mother.

Spending as much time together as they did, the two were nearly inseparable. The floor was swept from underneath them with Uriell’s mothers breast cancer diagnosis when she was 12. Her father immediately retired from his 35-year career as a firefighter to tend to his wife and take care of the kids.

“I always saw my Mom as a very strong person. I never thought something like cancer could take her down,” Uriell explained.

“It was like we dissolved. All of the driving force, all of the sparkle, just instantly gone,” her father remembered.

When learning of his wife’s passing, he drove home to explain to his children that their mother had died. They took divergent roads on how they responded. His son declared he was going to school that day because that is what his mother would’ve wanted. Uriell withdrew, turning to the thing that kept her closest to her mother as a sanctuary: the golf course.

“I just like the aspect of golf where you’re out there with yourself and you’re doing whatever you need to do. I feel like focusing on those two things, the mental and physical sides of it, kept me from going into dark places,” Uriell explained.

Her mother left Uriell a parting gift as she was nearing her death. Chatting with her husband, she hoped that Uriell could compete in a prestigious women’s amateur tournament, the Joanne Winter Arizona Silver Belle Championship.

The next day after the discussion, Uriell’s father received a phone call from the Joanne Winter Arizona Silver Belle Championship’s tournament director, wondering if Uriell would be interested in playing. Her father asked for them to hold for a day as he needed to find a way to pay. It was confirmed to the family that the entry had been paid for already, set up by his wife.

Uriell participated in the annual December tournament each year thereafter. Before playing the event at the age of 18 for the fifth time, University of Arkansas Head Women’s Golf Coach Shauna Taylor got a tip from then freshman Emily Tuber that Uriell still hadn’t found a home for her golf talents in college. Taylor flew out to Arizona for the event, beginning the recruiting process that would setup the next four years of the California native’s life.

A Family Dynamic at Arkansas

The 12-year head coach of the Razorback program is known for building a tight knit locker room for her players. While she cannot put an exact number to it, she knows a quality team environment is worth a few strokes.

“Golf is about 20 percent of what I do. The other 80 percent is just trying to help our young women grow, mature and gain life skills to help them be successful, even after golf.”

Uriell’s father was concerned about sending his daughter so far away from Carlsbad when considering Arkansas. After visiting the campus, along with Taylor and assistant Mike Adams, “Every time I sent her away from home, I felt like I was sending her off to family.”

Uriell then had an adjustment period to get out of her shell. She left an imprint on her teammates without having to say a word with her opening steps on the Fayetteville campus.

“She really stepped up and wanted to make a name for herself and you saw that every day when she went to practice. She worked super hard, and she’s very determined,” Uriell’s college teammate and roommate Summar Roachell saw.

Taylor’s influence steadily worked on Uriell as the years progressed. Immediately recognizing Uriell’s potential in golf when signing her due to her ball striking ability, she pushed her to improve year over year.

“Shauna expected a result, just like her mother did. Alana gravitated to that right away,” her father saw in her daughter.

Uriell’s average dropped every single year at Arkansas, posting a 71.7 average her senior year and finding 14 greens in regulation per round.

The most important improvement for Uriell may have been off the course. “I feel more at ease with myself now coming out of the program. The golf side is awesome, but you have to be a full person to be able to take your game to the next level,” she explained.

It wasn’t a long wait for the next level of Uriell’s game, entering into Q-Series shortly after her collegiate career concluded.

Making it to the LPGA

It was a rough start for Uriell in the 2018 Final Q-Series tournament. She had just turned pro two days before it began. She was (+11) through her opening three rounds, sitting T92 and well behind the pack. She fought back over the final five rounds, citing a course change that more visually fit her eye from Pinehurst No. 6 to Pinehurst No. 7. She carded (+3) for the tournament to finish at T20, earning her an LPGA tour card.

Her father and host family awaited her outside the 18th green to greet her. Uriell knew another was there in spirit, “My Mom was definitely with me the whole round. It was nice to have her there.”

Uriell has made two professional appearances this season, making waves in both. She won her first professional appearance on the Symetra Tour, taking home the SkyiGOLF Championship with an eagle on the first playoff hole. She then found herself one shot back after tying a collegiate career best 65 at the Founder’s Cup in her opening 18 holes on the LPGA Tour. She went on to make the cut and finish the tournament at (-10), for a T40 result. 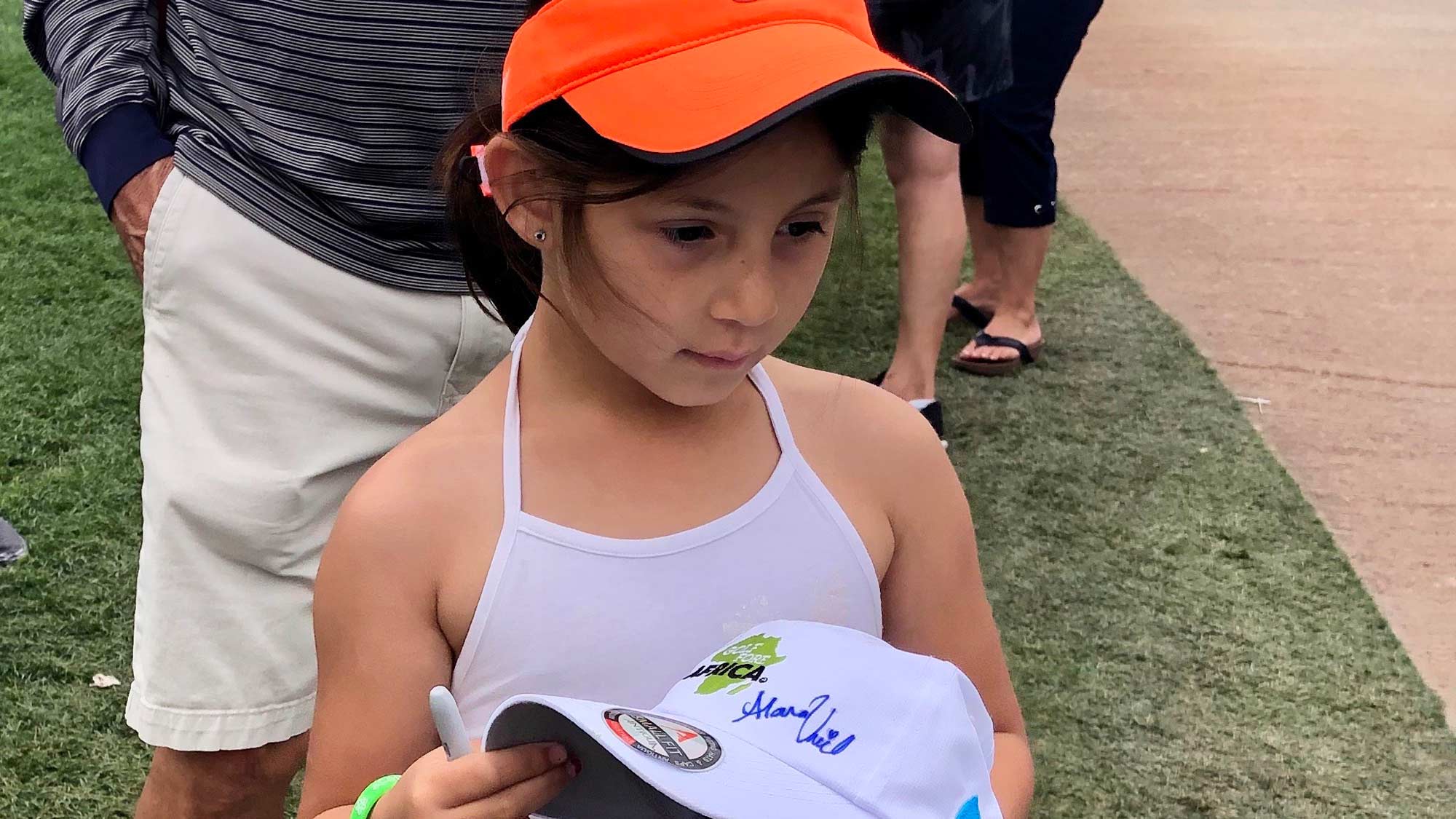 At Uriell's first LPGA event, young fans went up to her asking for an autograph throughout the week. Her father was able to take a photo of one such fan, holding her hat with Uriell’s signature on the left side of the hat. The neat cursive signature, with a heart for the dot above her ‘i’ in her last name, brings tears to her father’s eyes each time he looks at it.

“She’s living her dream and starting someone else’s. It’s coming full circle for her,” her father says with pride.

As Uriell tees it up and interacts with other young fans, she helps inspire them to begin finding their own dreams in golf.

It is their job to go achieve them from here.