Sung Hyun Park- Park has found two top 10s in three appearances in Palm Springs, riding high after a T2 performance in the Kia Classic. It extends her top 15 streak to six of her last seven tournaments.

There’s no reason to expect Park to slow down at the opening major of the year, as she fired a 64 in her second round of the ANA Inspiration last year. In her three appearances in the tournament, she’s shot in the 60s in five of the six opening rounds. A victory in Palm Springs would deliver her second win of the year and third major in her career, as she works towards her new goal for the season, five victories on the year.

Ariya Jutanugarn- Jutanugarn enters Palm Springs after a (-4) final round to post a T28 finish in the Kia Classic. The ANA Inspiration is a strong event for the Rolex Women’s World Rankings No. 2 golfer, as Jutanugarn has finished in the top 10 the last three years.

Nelly Korda- 2019 has been the year of the Korda so far, as the 20-year-old has finished in the top 10 in every appearance she’s made this year, with six consecutive top 10s dating back to the end of the 2018 season.

She took her first event of the year off last week,but remains in the lead in average scoring, at a scintillating 68.4 strokes per round. She had her best finish in the tournament last year, culminating a T13 finish with an ANA Inspiration best for herself 67.

“I had goosebumps walking alongside Poppie’s Pond for the first time since last year and remembering everything that happened on Sunday evening and the following day in the play-off. The fans were incredible watching us until it was dark and we could not believe how many came back the next day to watch us finish,” Pernilla Lindberg described her playoff victory last year during ANA Inspiration’s media day on March 5th. 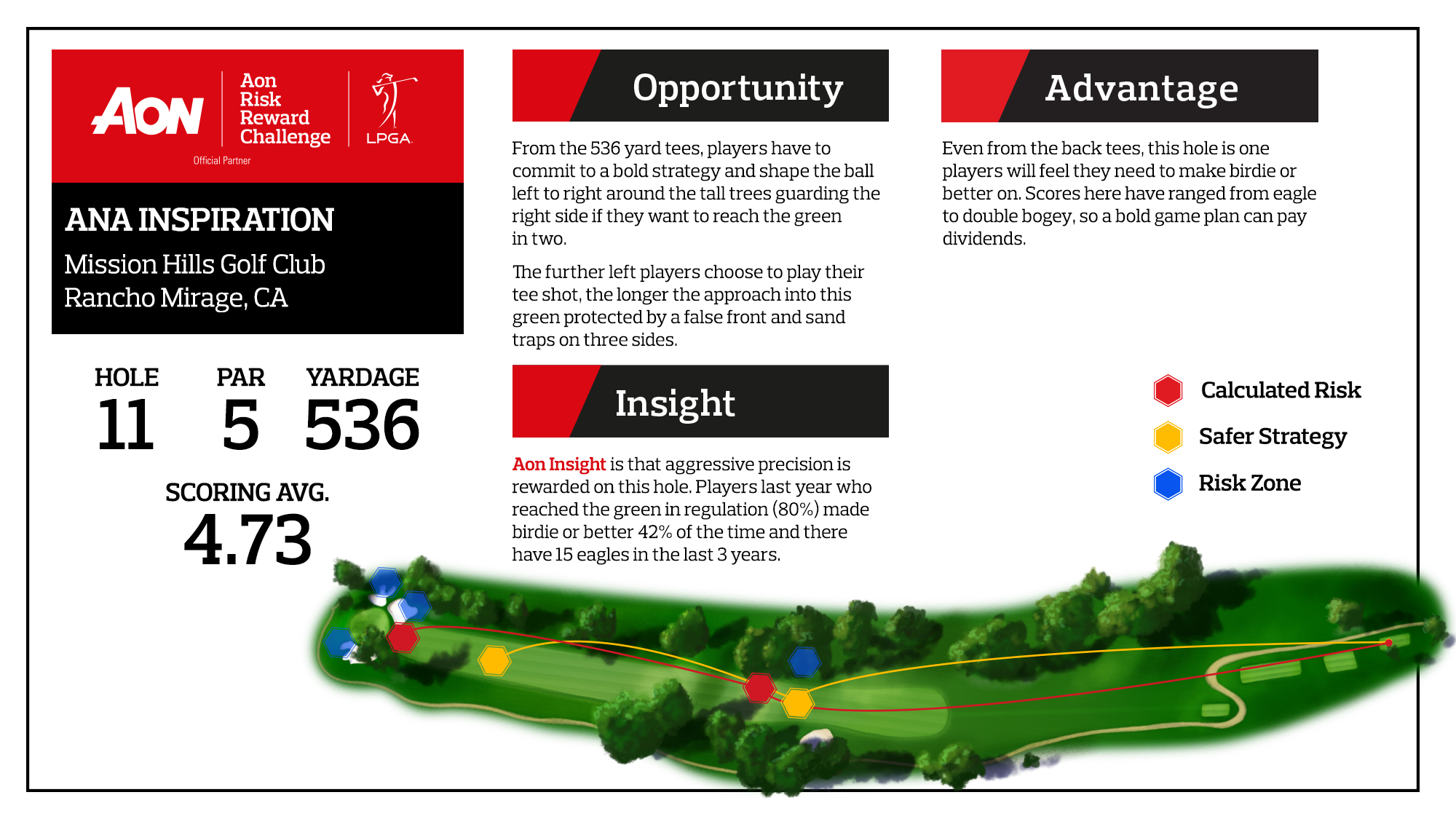 This par 5 will give Players an advantage who go for it and find the green in two. The risk comes in because the fairway is narrow off the tee. Varying pin placements increase the difficulty on the green.

28- Number of winners of the tournament in its 35-year history.

26- The number of cuts made by Juli Inkster, the most in the tournament’s history.

Playoff History- Last year’s ANA Inspiration had the longest sudden death playoff in any major championship in golf’s history, with Inbee Park and Pernilla Lindberg dueling for eight holes after Jennifer Song dropped out on the third hole. After playing the 18thfour consecutive times, Park and Lindberg settled the 2018 ANA Inspiration on the 10th, when Lindberg drained a 30-footer to take home her first professional career victory at any level.

Poppie’s Pond- A tradition that has been unbroken since 1994, the winner takes a jump into Poppie’s Pond to celebrate the victory of the first major of the year. The maiden jump, taken in 1988 by Amy Alcott, was out of sheer excitement from her victory, getting her caddie Bill Kurre to join in with her. The winner this year will take the 26thconsecutive plunge into Poppie’s Pond.