SINGAPORE (AP) - Defending champion Michelle Wie has been forced to withdraw from the HSBC Women's World Championship with a recurrence of a right hand injury.

Wie, making her second start of the season after surgery on her right hand earlier this month, was 10-over after 14 holes Thursday when she withdrew while playing the 15th. She was holding her right wrist and hand as she walked up the fairway. 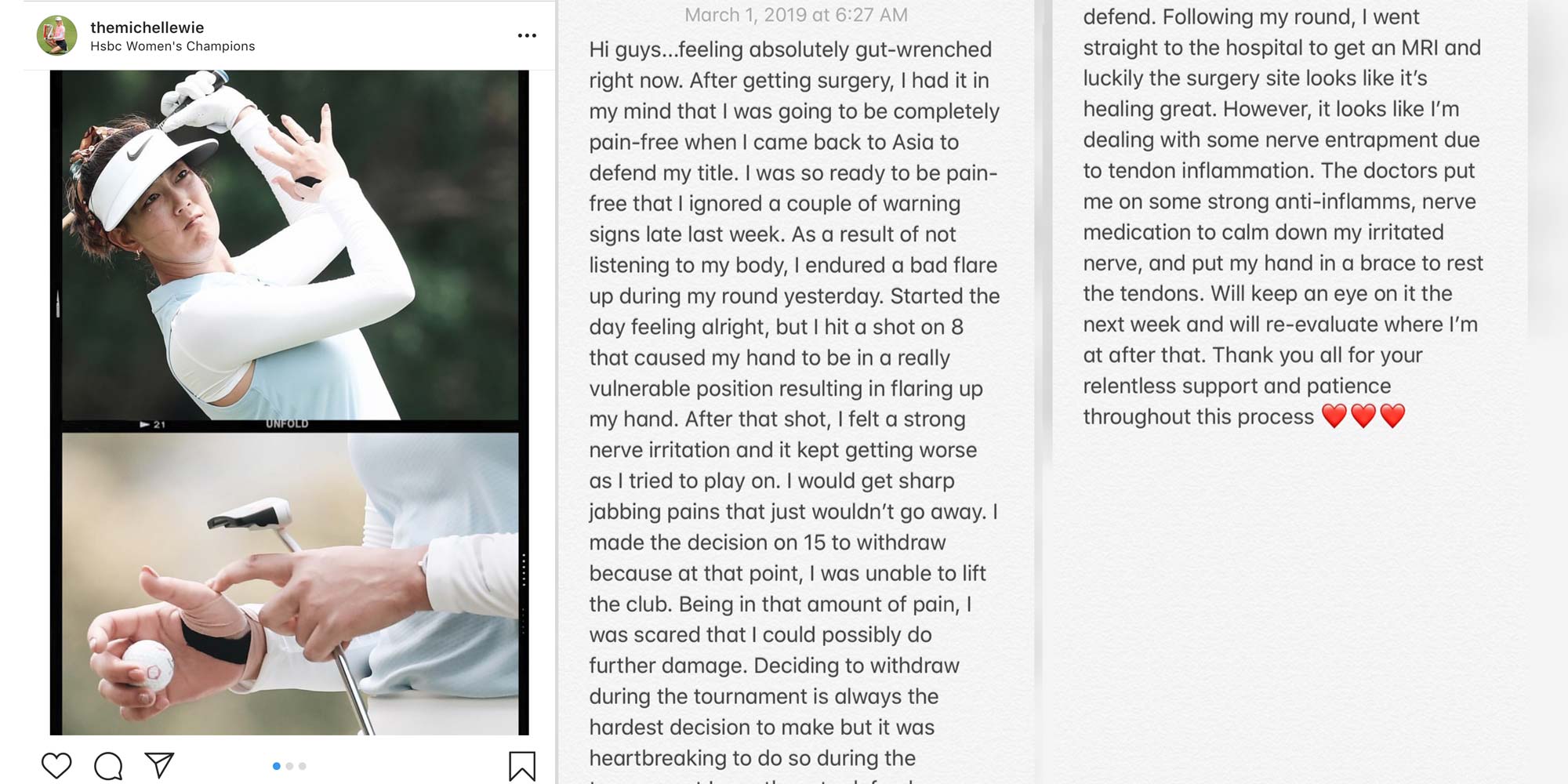 "Hi guys...feeling absolutely gut-wrenched right now. After getting surgery, I had it in my mind that I was going to be completely pain-free when I came back to Asia to defend my title. I was so ready to be pain-free that I ignored a couple of warning signs late last week. As a result of not listening to my body, I endured a bad flare up during my round yesterday. Started the day feeling alright, but I hit a shot on 8 that caused my hand to be in a really vulnerable position resulting in a bad flare up. After that shot, I felt a strong nerve irritation and it kept getting worse as I tried to play on. I would get sharp jabbing pains that just wouldn’t go away. I made the decision on 15 to withdraw because at that point, I was unable to lift the club. Being in that amount of pain, I was scared that I could possibly do further damage. Deciding to withdraw during the tournament is always the hardest decision to make but it was heartbreaking to do so during the tournament I was there to defend. Following my round, I went straight to the hospital to get an MRI and luckily the surgery site looks like it’s healing great. However, it looks like I’m dealing with some nerve entrapment due to tendon inflammation. The doctors put me on some strong anti-inflamms, nerve medication to calm down my irritated nerve, and put my hand in a brace to rest the tendons. Will keep an eye on it the next week and will re-evaluate where I’m at after that. Thank you all for your relentless support and patience throughout this process"

Wie fractured her hand and sustained extensive neck injuries in a car accident two years ago.

She had back-to back 7s on the eighth and ninth holes, the first for double-bogey and the second for a triple.

The 29-year-old Wie played in last week's LPGA Thailand tournament, where she finished tied for 23rd.

The 63-player field at Sentosa Golf Club's Tanjong course has no cut. The top 12 players in the world were in the final four groups Thursday.

Amy Yang, who won last week in Thailand, pulled out with an undisclosed illness after three holes Thursday. She parred her first hole but then went bogey-double bogey before deciding to quit.