Eiswerth Defends Title at Pinehurst No. 8 and More from LPGA Professionals National Championship

Eiswerth Defends Title at Pinehurst No. 8 and More from LPGA Professionals National Championship

“It was great. I played really, really well today. My ball-striking is the best I have had it ever probably,” said Eiswerth. “I gave myself a lot of chances today. Yesterday I didn’t really make any putts.”

Eiswerth said she would be celebrating on the road back to Jacksonville with her caddie and husband, Matt. “I promised him ice cream,” she joked, “so that will probably be our first stop.”

Eiswerth, an assistant women’s golf coach at the University of North Florida, said she is going home and straight back to work. But she is already excited to make another appearance at the KPMG Women’s PGA Championship. The top eight finishers in the Championship division earn exemptions into the 2020 major, to be held June 23-28 at Aronimink Golf Club in Newtown Square, Pa. 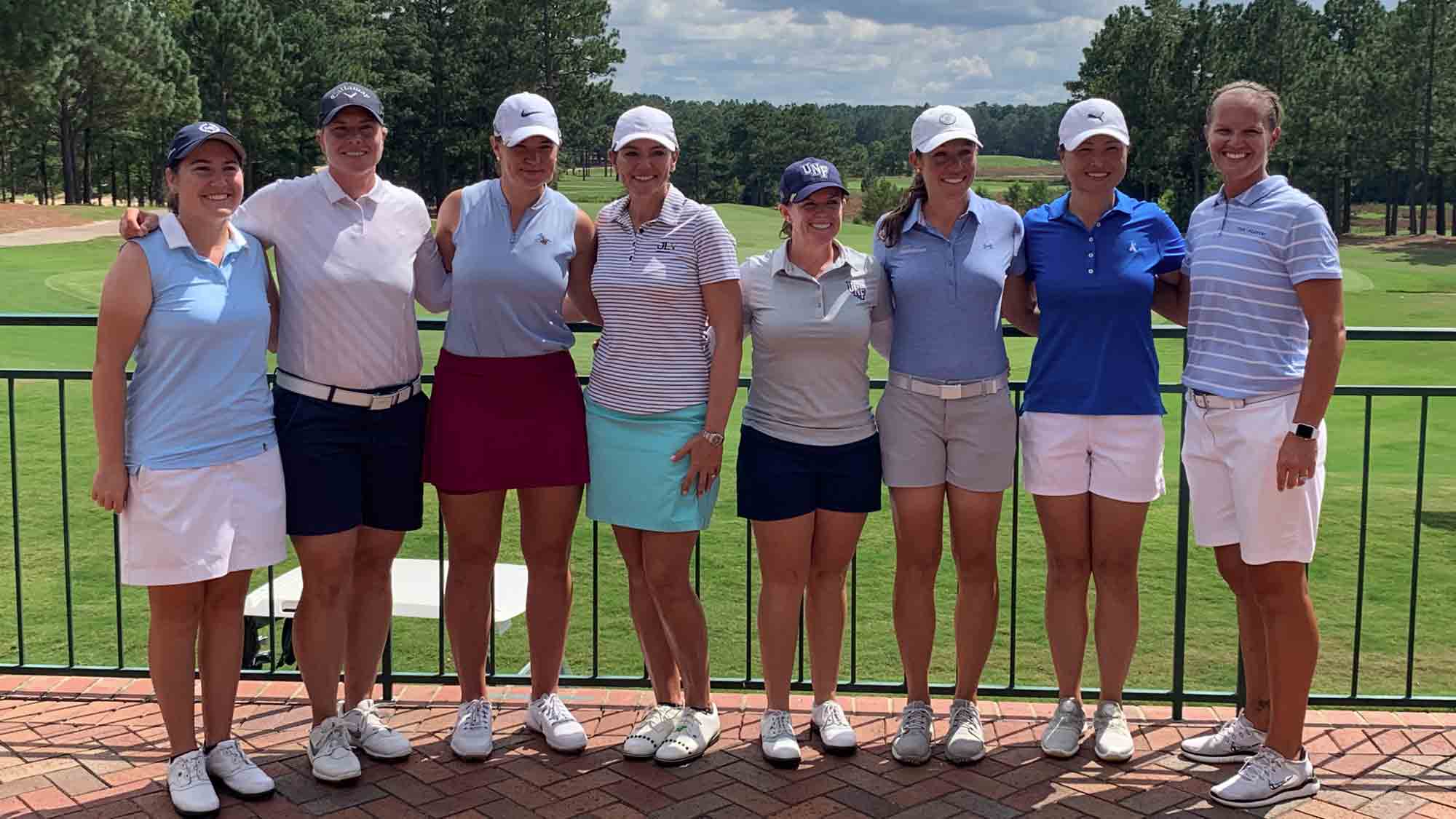 Eiswerth, Park, Coe and Curdt will make their second consecutive appearances at the major championship. Curdt almost was forced into a playoff for the final spot, but as the final group signed their scorecards, she was relieved.

“It’s always very nerve-wracking,” said Curdt. “Today I thought I was coasting until 16, and then had a double on 16. Finished strong on 17 and 18 and just waited anxiously to see how all the other players faired. So of course super excited and just thrilled to get back and try again.”

In front of a roaring gallery of family, friends and students, Pinehurst native Charlaine Hirst battled to the top of the Challenge division and won at +14, five strokes ahead of her competition.

“It’s unbelievable. I just went out there today to just play my game that I’ve played for two days,” said Hirst, who teaches at the nearby Country Club of Whispering Pines. “I drove the ball very well today and kept myself in play, just missed some putts and made some great putts. It’s very exciting.”

The second-round leaders Jaqueline Madison (Stilwell, Kan.) and Annie Rodriguez (Naples, Fla.) tied for second at +19. Liz Cooper (Woodbridge, Va.) and Joellyn Crooks (Fuquay Varina, N.C.), who recorded an ace on No. 5, tied for fourth at +21.

DIBOS COMES OUT ON TOP

Alicia Dibos (Greenwich, Conn.) recorded a final-round to 68 to secure the Senior division win at +1. Dibos shot five birdies and one bogey to edge out a tough Senior field and was extremely excited about her victory.

“I’m having goosebumps. I played so well the whole week but today the putts were going in,” said Dibos. I’m so happy because I don’t think I’ve ever putted like this in my life, and they were going in, so I could have shot a little bit lower. But very happy.”

Dibos said she was proud to compete in the tournament and see some familiar faces at Pinehurst No. 8. “The national championship is a very prestigious event for all of us that are now teaching,” said Dibos. “I drove from New York to support the event and I’m so glad to see my friends.”

Four players tied for second at +3: 2018 champion Barbara Moxness (Edina, Minn.), Jamie Fischer (Lake Forest, Ill.) Laurie Rinker (Stuart, Fla.) and Laura Shanahan Rowe (Hampton, N.H.). The top eight finishers and ties in the Senior division qualify for the 2019 Senior LPGA Championship at the French Lick Resort as well as any competitors over age 45 who finish in the top 10 in the Championship division.

Stephanie Connelly Eiswerth (1, +5) on playing a major close to home:

“I’m really excited, especially growing up not too far, about an hour and a half away near the Baltimore area, so hopefully some family and friends back home can come and see me. I’ve never been to Aronimink, but I’ve heard wonderful things”

Alison Curdt (T7, +12) on the relief after realizing there would be no playoff:

“Huge relief. That headache instantly disappeared. Donna White so graciously was going to caddie for me in the playoff and just her having the bib on created some good energy and some good luck. Sent a few text messages to my family because everyone back home was waiting things out.”

Charlaine Hirst (1, +14) on winning in front of the biggest gallery:

“I feed off of everything. I’ve got so many friends out there, people that I’ve worked with and it’s just so exciting. It’s overwhelming.”