Tiffany Joh is Proud to Rep UCLA, Prouder to Vouch for UCLA Health at LA Open

It is a common sight at LPGA Tour events across the globe and Rolex Rankings No. 1 Sung Hyun Park embraces its positive impact on her own game. It is the Namdalla effect, the welcoming vibes and huge encouragement that Park gets from her fan club members - whether she is competing at home in Korea or elsewhere in the world.

It all starts close to the first or the 10th tee, shortly before Park sets off for every round that she plays on the LPGA Tour. One of her fans will shout out: "Namdalla!" and the others will then chant in reply: "Fighting!"

The fan club took their name from a word emblazoned on Park's golf bag, 'Namdalla', which means ‘I am different’ when translated from Korean into English. For Park, that fan support is a major factor in her own success out on the golf course.

"They are always supporting me, even when the weather is very hot," Park, who won her sixth LPGA Tour title at the HSBC Women’s World Championship in Singapore earlier this month, told LPGA.com. "They come to see me and cheer for me, and they give me snacks. Just them being there for me makes me focus on my game more. They make me happy. They help my game."

The pre-round ritual, with the chants of "Namdalla!" and "Fighting!", is not unusual. Several other leading Korean players, such as In Gee Chun and 2019 Bank of Hope Founders Cup champion Jin Young Ko, have equally loyal fan clubs who try to make as much noise as possible when they deliver the "Fighting!" call on the first tee. What makes Park's Namdalla fan club unique is its size. Korean supporters would claim that there has not been a fan club of such stature since 'Arnie's Army' cheered on PGA Tour golf great Arnold Palmer in the 1960s and 1970s.

Park's fan club, which comprises two separate divisions, mushroomed as she established herself as a star player on the LPGA of Korea Tour (KLPGA) in 2015 and 2016 and it now boasts more than 11,000 members.

"Currently there are 8,300 fans registered in the Naver Fan Cafe and additionally 3,500 fans in the Daum Cafe," Namdalla fan club manager Shin Ja Cho, speaking through an interpreter, told LPGA.com about the club's two divisions.

"On average at least 50 Namdalla fans will follow Sung Hyun on weekdays when she is competing in Korea and more than a hundred will cheer her on over the weekends. When Sung Hyun is playing in the United States, there will be roughly 10 Namdalla fans watching her on site - and they all pay their own way when it comes to the travel. Elsewhere in Asia, even more fans will follow her on site." 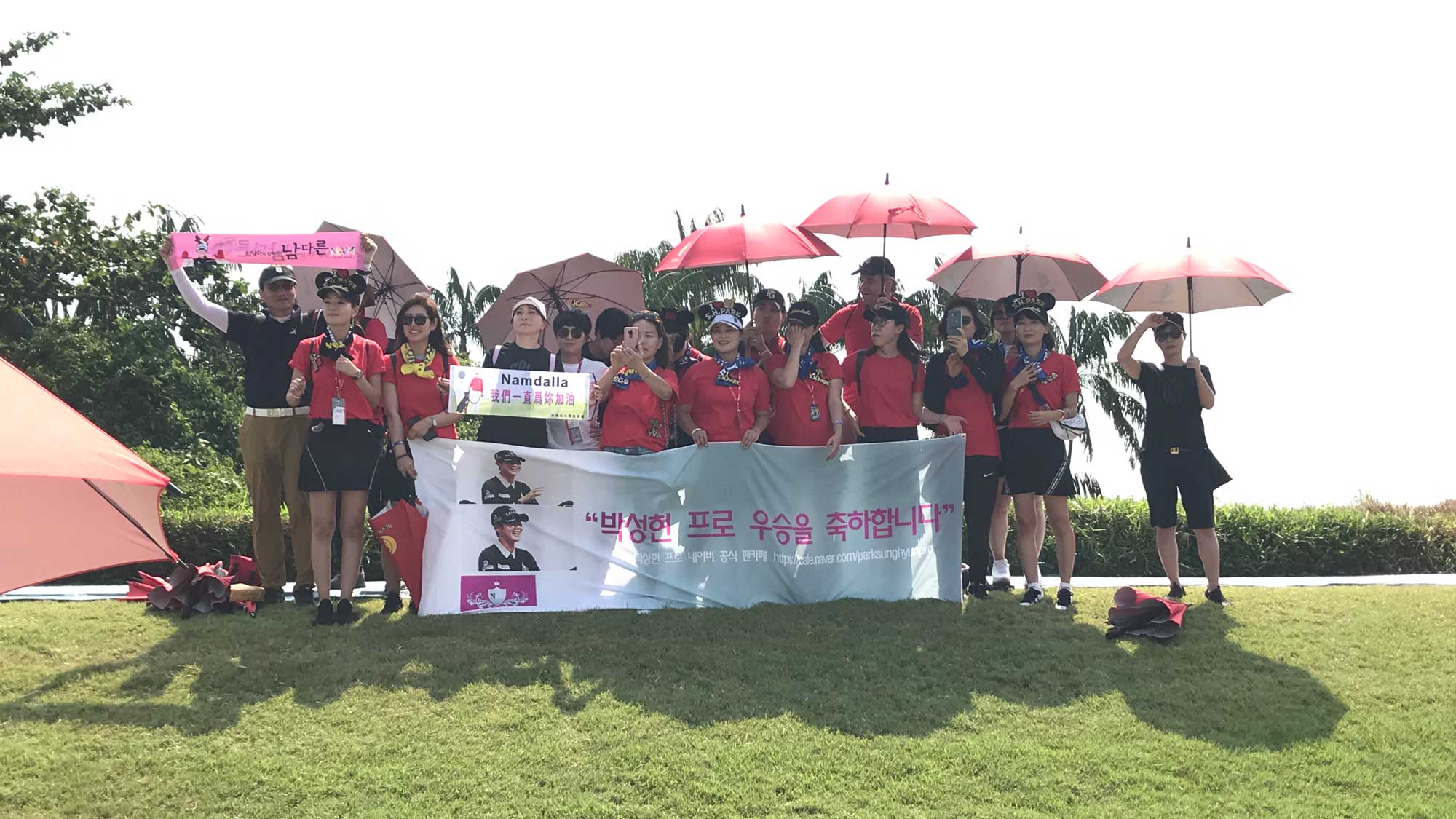 Those Namdalla fans certainly travel well, and very conspicuously. Wherever they go, they will be wearing t-shirts bearing phrases or lettering such as 'I heart S.H. Park' and 'NDL' and they carry signs with the words 'We Always Cheer For You' in both English and Korean. When the galleries are not being quiet enough for their favorite player, they will raise their hands to hush the fans until Park has completed her shot or stroked her putt. When Park does something notable, whether that be hitting an ultra-long drive or sinking a birdie putt, the Namdalla fans will erupt in loud cheers.

In addition to all the encouragement they give out on the course, the Namdalla fans also provide food for Park. After every round, they will hand her a Tupperware case containing some of her favorite Korean snacks such as sausage, chocolate and fruit.

"They are the most passionate fan club out there and they look after me like moms," Park said with a huge smile.

Park is very generous with her fans and she makes a point of meeting up with them after the opening and final round of every tournament in which she competes. She will also pose with them in a group photo, taken by one of the fans. It is also common for Park to go out to dinner with her fans when she is on the road, and she did so after her LPGA Tour wins last year at the KPMG Women's PGA Championship and the Indy Women in Tech Championship. At the end of every year, Park will host a fan club dinner where she will take part in a Q&A session as well as several more group photos. After nearly 600 fans showed up for the dinner in 2016, the function was limited to around 280 people for the past two years.

"The attendance fee for that dinner is different from year to year, but last year it was ₩ 100,000 KRW (South Korean Won)," said Cho.

The Namdalla fan club was established in 2015 and prospective members have to sign up via its official website before being approved by a membership committee of four or five managers. Most of the fan club members are females aged between 30 and 50.

Cho, who lives in Siheung City and travels on the road to support Park for at least three or four tournaments each year, decided to become a Namdalla member immediately after the fan club was formed. "I was taken by her magnificent long drive and her fantastic swing when I saw her playing at the 2015 Cantata Ladies Open," she said. "I immediately decided to join her fan club."

Since its inception just four years ago, the Namdalla fan club has grown to more than 11,000 members worldwide. As Park continues to flourish in professional golf competition, expect that number to close in on the 20,000-mark in the very near future. 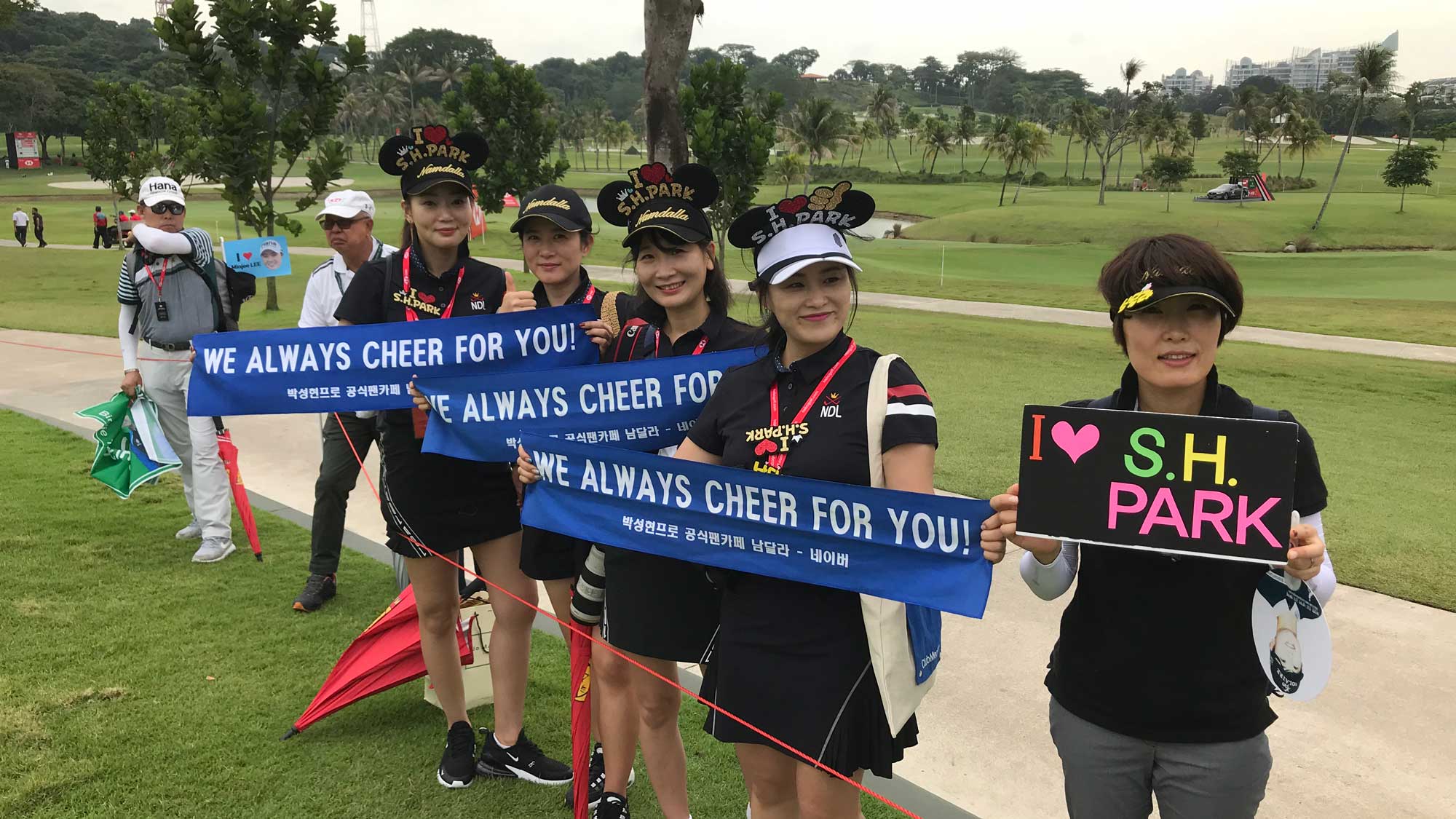