Richly Deserved: Shirley Spork and Annika Sorenstam Will Be Inducted Into The PGA Of America Hall Of Fame

For LPGA Founder and long-time teaching professional Shirley Spork, it is all about cementing the philosophy of giving back.

For LPGA and World Golf Halls of Fame member Annika Sorenstam, who is also a 10-time major champion, it is the privilege of being bracketed among an elite group of people that helped golf become a better game because of their accomplishments on and off the course.

What is "it"? It is the richly-deserved inclusion of Spork and Sorenstam among the class of 2019 that will be inducted into the PGA of America Hall of Fame on Tuesday, Nov. 5, at the PGA's 103rd Annual Meeting in West Palm Beach, Fla. Rounding out the class of 2019 will be former PGA Championship winners Dave Marr II and Davis Love III, former PGA President Derek Sprague and the late golf club designer, philanthropist and creator of the Solheim Cup, Karsten Solheim.

Making the inductions of Spork and Sorenstam even more significant is the fact that they will become only the fifth and sixth women to enter the PGA of America Hall of Fame since it was established in 1940 - following in the footsteps of Babe Didrikson Zaharias, Patty Berg, Renee Powell and Mickey Wright.

"It's certainly a huge honor," Sorenstam, who ended her LPGA career after the 2008 season with 72 tournament wins to her name, told LPGA.com. "What an elite group of women that have been able to be recognized by the PGA of America, so I obviously find it very special that they think my achievements on and off the golf course are worthy of that."

Spork told LPGA.com: "Babe, Patty, Renee and Mickey were honored for playing and giving clinics, for playing the game. And I am honored for giving back to the development of the game, developing players. So for me, this is a pinnacle of an award for a professional golfer who has serviced the industry."

When it comes to golf, Spork has done it all. She has been a collegiate champion, a touring professional, a club professional, a golf course manager, a teacher mentor and has given golf lessons to celebrities such as Harpo Marx, Danny Kaye and Nat King Cole.

A spritely 92-year-old who grew up in Detroit in the 1930s and early 1940s, she was not only one of the LPGA's 13 Founders but also played a pivotal role in establishing the LPGA's Teaching Division.

"I have serviced the industry through many phases - as a golf professional, as a director of golf, as a director of golf schools," said Spork. "I also worked seven years for the National Golf Foundation in their education program. I was the Western Section director of education and was involved in co-authoring the teaching manual that was used by teachers and coaches, at schools, colleges, universities and what was the beginning of the LPGA Teaching Division. I would say that if it used to be that a golf professional wore many hats, I have worn them all! I have laid sod, cut greens, I've designed golf equipment, I gave clinics in various countries, and I've been in every golf state there is here in the United States!"

In 1950, Spork and 12 other women had the vision to establish the LPGA and nine years later, with the fledgling Tour having expanded to 29 events spread across a nine-month season, this band of pioneering professionals finally set up the LPGA Teaching Division after overcoming a few roadblocks along the way. 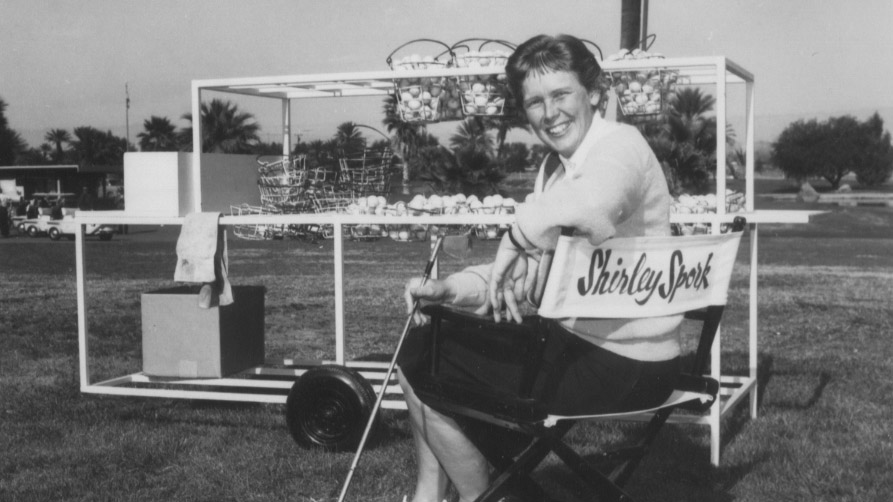 That Teaching Division later became the Teaching and Club Professional Membership and, in partnership with the LPGA-USGA Girls Golf initiative, it has been a driving force behind an astonishing surge in the numbers of under-18 girls taking up the game in the United States since 2010.

"Why did I do so many things? I think it was the fact that I was born and raised in the era of the beginning of challenges for women to excel in the golf industry and through the help of various PGA professionals, I was able to succeed," said Spork. "The first one was Otto Hinds, who gave a 13-year-old girl her very first used set of three, five, seven and nine-irons to play with. After that, I had a mentor in Mr. Joey Rey, who started the Monterey Bay Junior Golf Association, and he gave me the chance to become a head golf professional at a municipal facility at the tender age of 21 or 22 years old. He said to me, 'You can do this. There's not any money on the tour, apart from the ‘Big Three’ of Babe (Zaharias), Louise (Suggs) and Patty (Berg). This is a chance for you to use your education and develop yourself in the industry, in the golf business.' And further down the road convincing the Tour Division after three years, passing by one vote, to start the Teaching Division of the LPGA, along with co-authoring with Marilynn Smith, who was the president of our Tour at the time, and Betty Hicks and Barbara Rotvig. But we got started. And having gone forward, I am most proud of the fact that the LPGA Teaching Division is global. We have 1,800 members and I feel that this is my legacy."

Teaching the game became the true vocation for Spork, who never won an LPGA title and recorded her career-best finish with a runner-up spot at the 1962 LPGA Championship.

In contrast, Sorenstam established herself as one of the greatest golfers of all time with a remarkable run of success on the LPGA Tour. She won her first major aged 24 at the 1995 U.S. Women's Open, and by the time she ended her career just over a decade ago, she had racked up a total of 10 LPGA Tour majors, which trails only Berg (15), Wright (13) and Louise Suggs (11) on the all-time list.

Where does her PGA of America Hall of Fame induction rank among her many achievements in golf? "I really don't rank my achievements, even though you know I'm all about stats, I'm all about numbers,” Sorenstam said. “I don't necessarily have a ranking as far as importance or acknowledgment or status. I think it's more just that I really, really appreciate it. I know this is an amazing honor. I feel privileged to be in such an elite group of people with an organization that has done so much for the game. I have spent the last 11 years trying to give back to the game as a thank-you, so to be recognized means a lot to me."

Sorenstam was thrilled when she first heard about her 2019 induction. "PGA of America president Suzy Whaley called me and I've gotten to know Suzy the last few years because she sits on the Foundation Board, so when she called me, I really didn't know what it was all about. I thought maybe it was something about the Foundation!" Sorenstam said. "So it was a very pleasant and happy surprise and certainly great news!"

Sorenstam's induction also owes a great deal to what she has achieved since her competitive career ended. Her ANNIKA Foundation impacts more than 450 girls each year through junior golf days, an intercollegiate tournament and five international events for top-tier players. She is also a spokeswoman for the LPGA-USGA Girls Golf program's initiatives.

Both Sorenstam and Spork have left an indelible mark on golf in general and on the women's game specifically. Their induction this November into the PGA of America Hall of Fame is just one more reminder of their extraordinary impact.