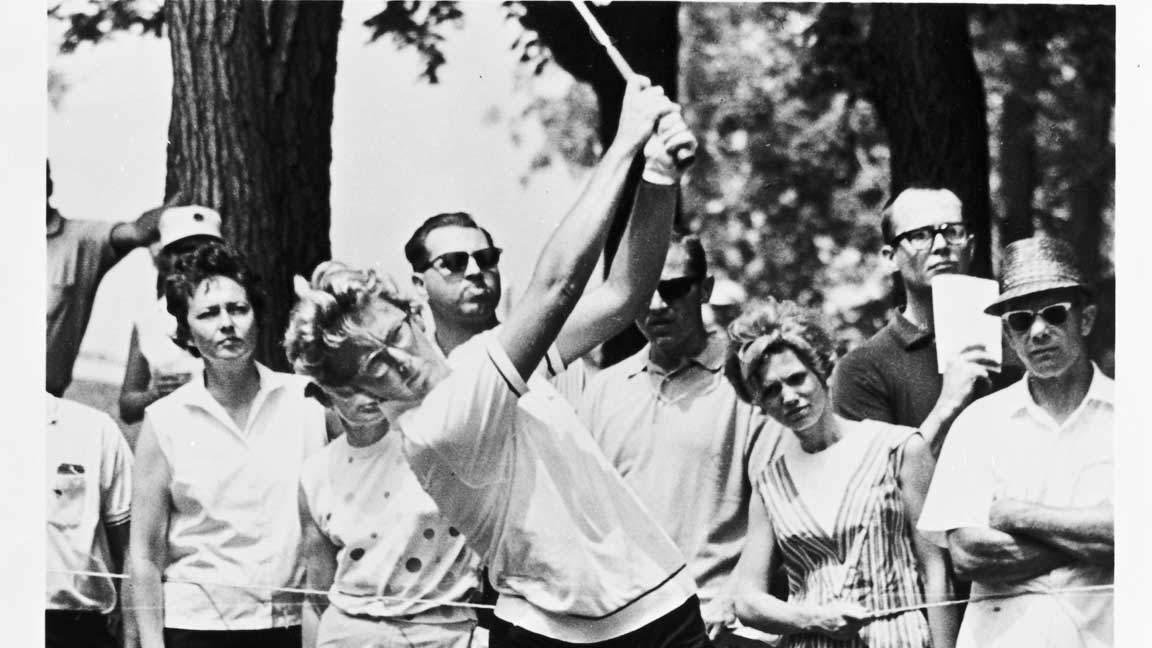 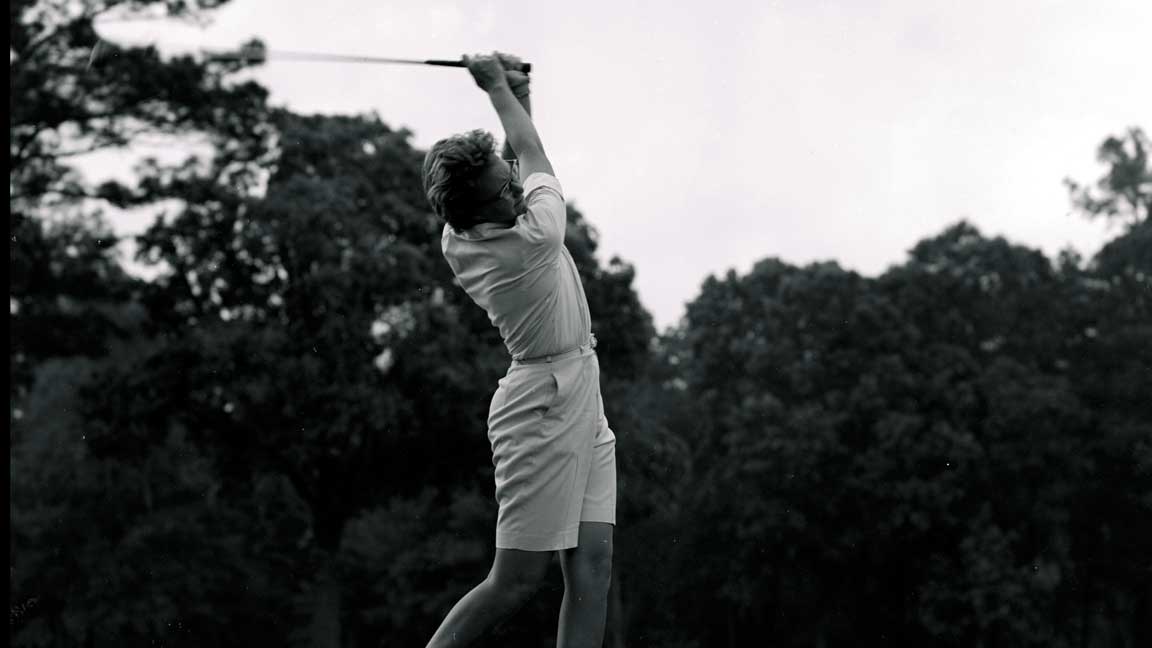 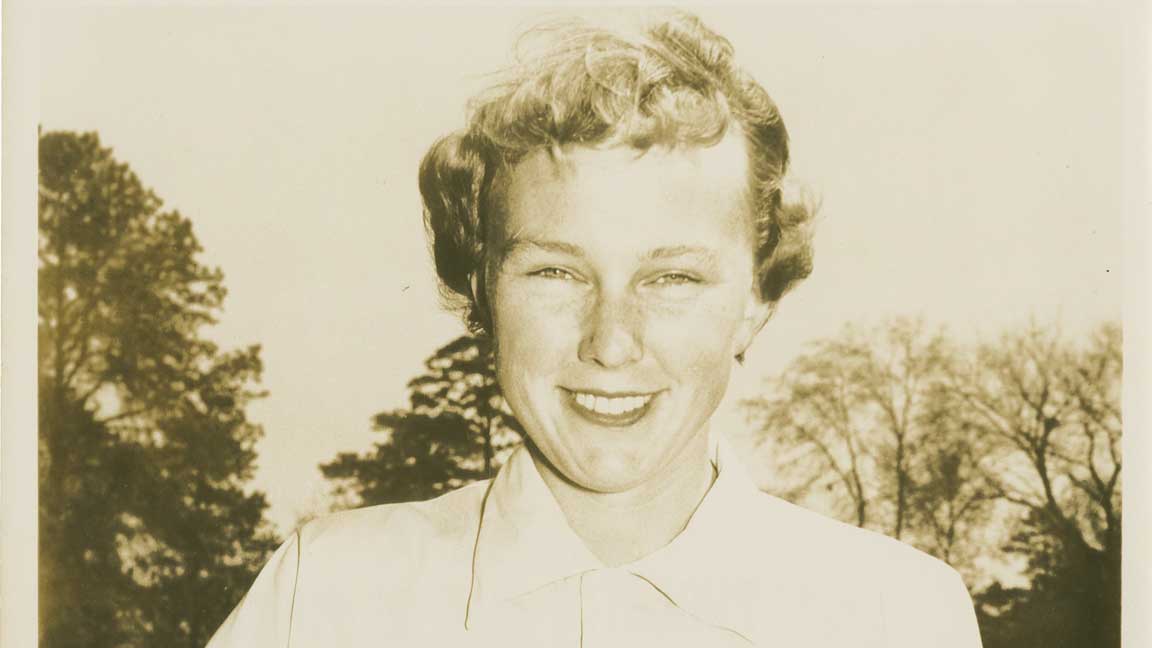 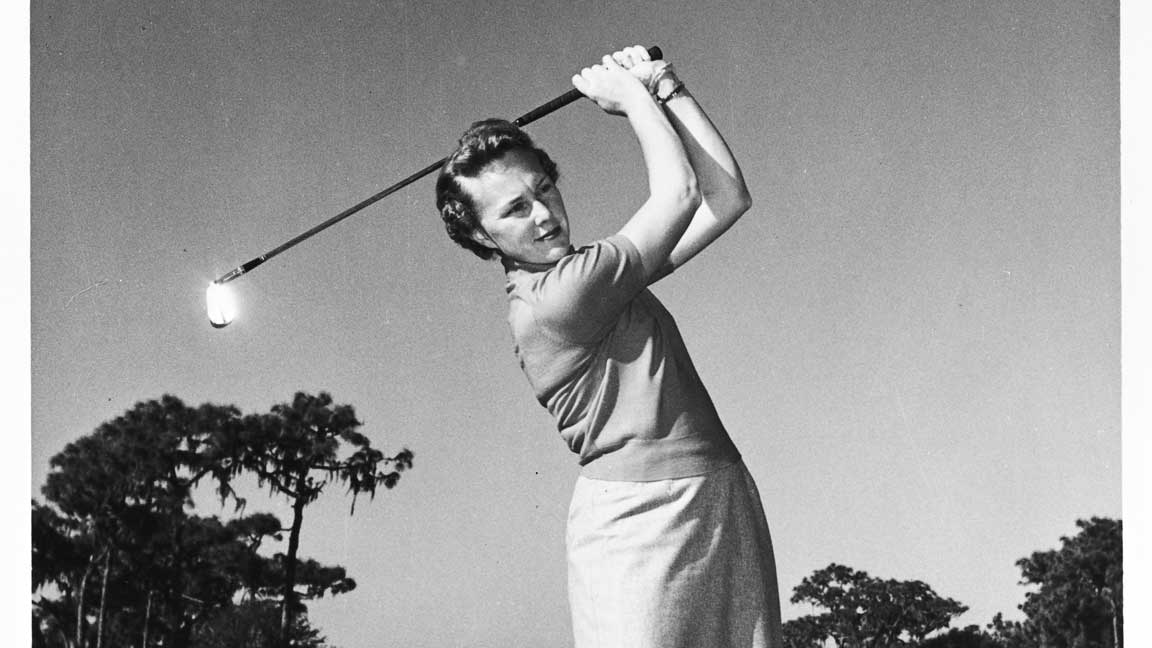 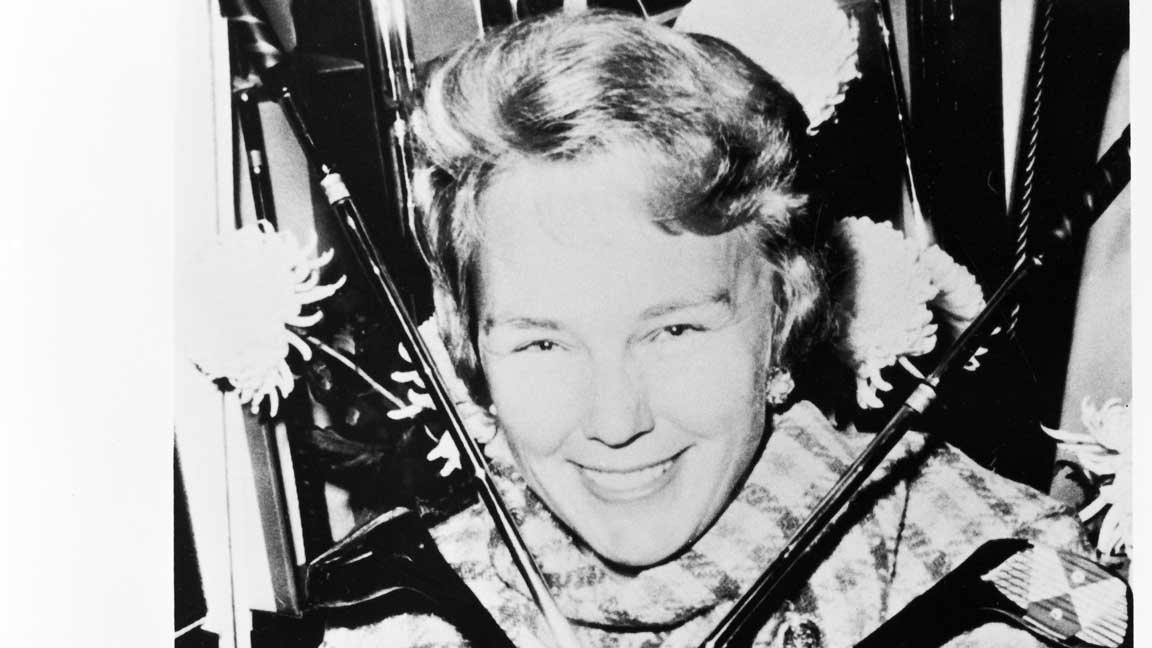 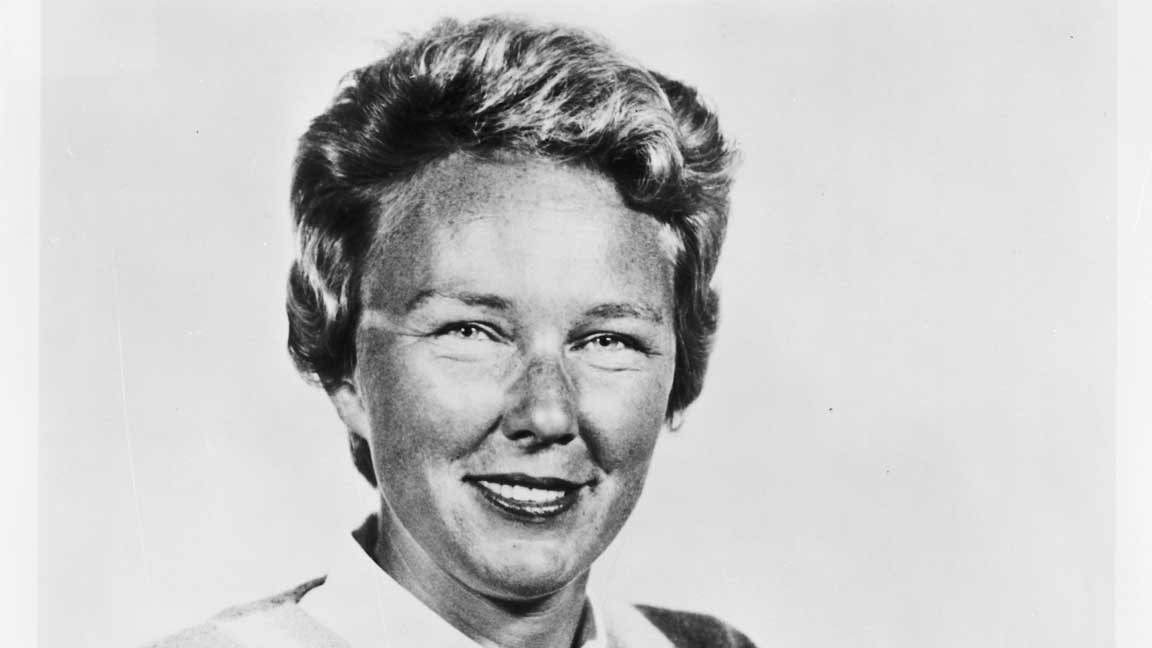 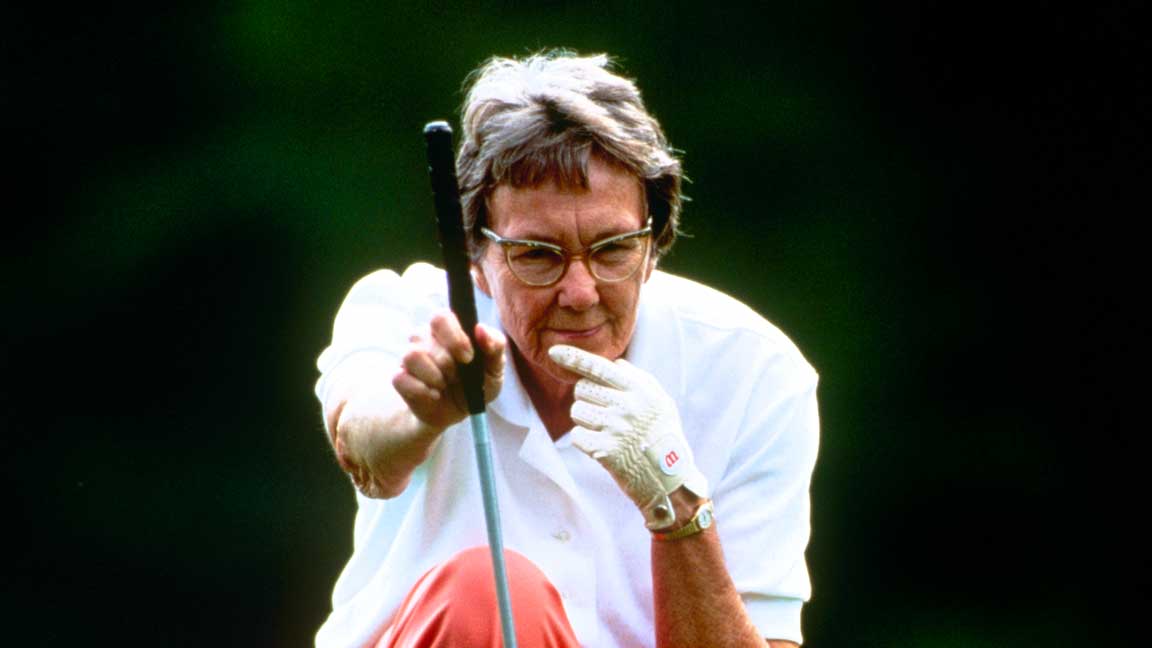 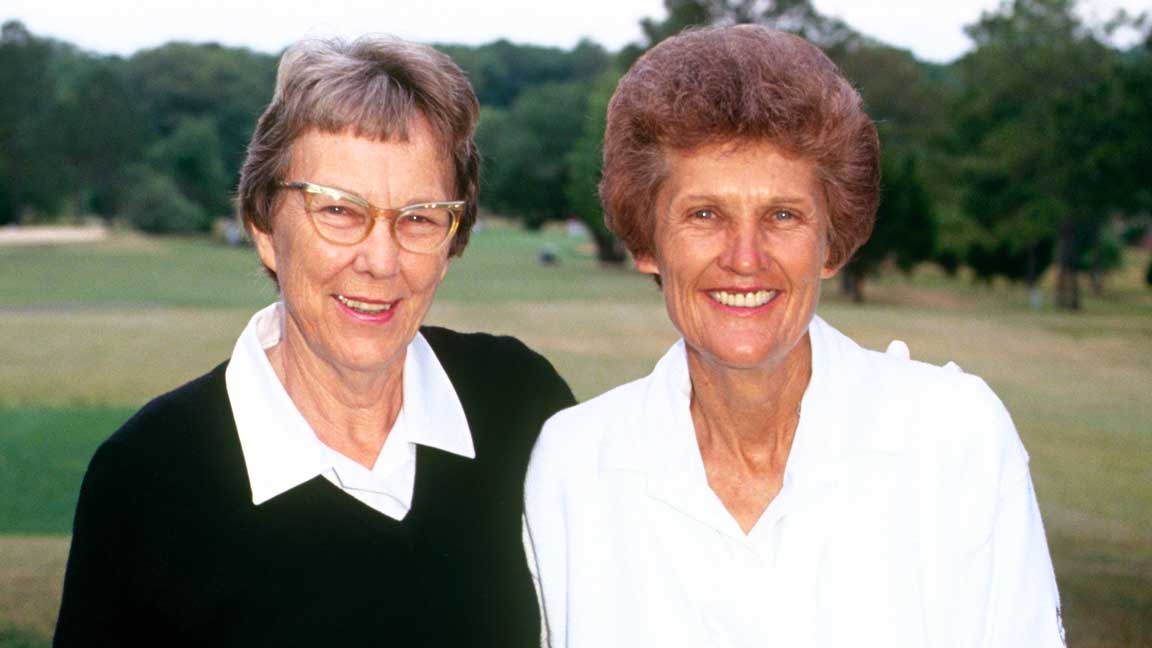 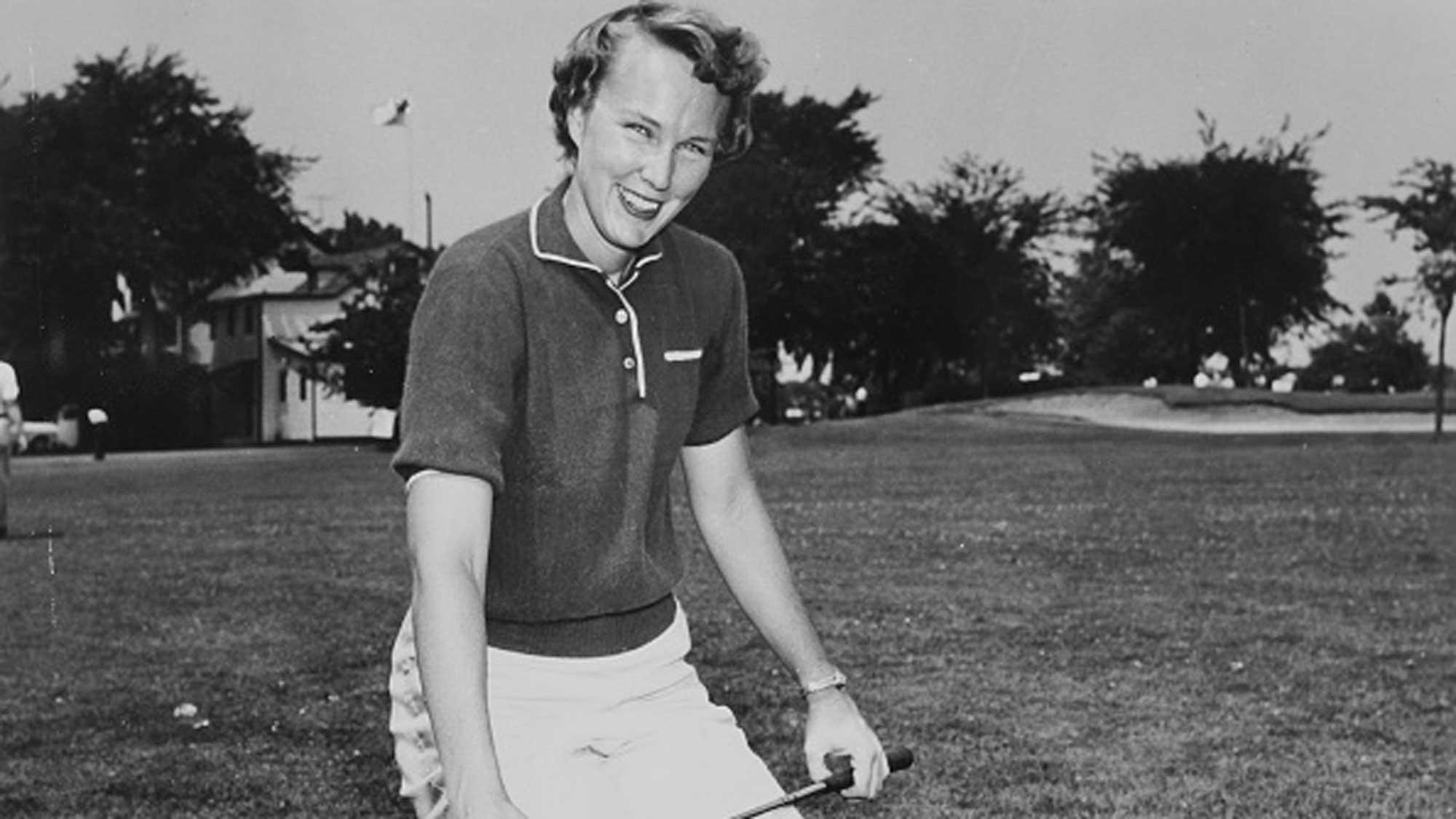 Written By: Bill Fields
Bill Fields is a veteran sports writer and historian who has been covering golf for more than 40 years and is the 2020 recipient of the PGA of America Lifetime Achievement Award in Journalism
﻿
0Share on Facebook
0

Mickey Wright, who possessed a swing that was the definition of graceful power and used it to become one of the LPGA’s most prolific winners despite retiring from full-time competition when she was 34, died February 17, 2020 at age 85.

“We are deeply saddened to learn about the passing of Mickey Wright,” said LPGA Commissioner Mike Whan. “We lost a legend, but we may also have lost the best swing in golf history today. Our thoughts are with her family and friends.”

A perfectionist who savored the strong, soaring shots that became her signature as much as the many victories they produced, Wright became a legend for her technique (still regarded as a golf ideal) and success (82 titles, including 13 major championships).

“She was the best I’ve ever seen, man or woman,” record 88-time LPGA winner Kathy Whitworth told espnW.com in 2015. “I’ve had the privilege of playing with Sam Snead and Jack Nicklaus and Arnold Palmer and all of them. And some of our ladies had wonderful swings. But nobody hit it like Mickey, just nobody. She had 82 wins, but she would have won over 100 with no trouble if she had stayed on tour.”

The day she passed away, Whitworth said, “Today the golf world lost one of its greatest champions. And today, I lost a very dear friend. I owe a great deal to Mickey Wright. She contributed so much to my career success and to my life as well. What a blessing to play alongside Mickey. It was impossible to be around her without knowing she was someone very special.”

Although Wright joined the LPGA in 1955 after a year at Stanford University and a runner-up finish in the U.S. Women’s Amateur, the Southern California native truly became the face of the tour at the outset of its second decade with a sustained stretch of golf that World Golf Hall of Famer Tom Watson called “the best run anyone has ever had.”

“It was a lot of pressure to be in contention week after week for five or six years,” Wright told Golf World in 2000. “I guess they call it burnout now, but it wore me out. Unless you’re a golfer, you can’t understand the tension and pressure of tournament play. And it was the expectations: It was always, ‘What’s wrong with your game? ‘Are you coming apart?’ Second or third isn’t bad, but it feels bad when you’ve won 44 tournaments in four years.”

While debilitating to Wright, who also served as LPGA president for two years of her dominant reign, her pursuit of perfection was a great asset to the fledgling stage on which she performed. “Mickey gave the LPGA credibility in the area of skill and competence,” contemporary Betsy Rawls told women’s golf historian Rhonda Glenn in The Illustrated History of Women’s Golf. “No one would ever doubt, after seeing Mickey, that women could be great golfers.”

Glenn described Wright as having “viewed golf as a form of self-expression rather than a contest between people.” In a bylined article in Sports Illustrated in 2012, Wright wrote, “I treated hitting a golf ball as an art form.”

Indeed, Wright’s swing was considered a masterpiece—a fluid, flawless sequence of movements that delivered the clubhead with power and precision and allowed her to hit the ball on a special trajectory for a female golfer.

“Her shots were something to behold,” Rawls, a 55-time LPGA winner, said in The Illustrated History of Women’s Golf. “She was the longest hitter of her era, but it was more the character of her shots that separated her from the rest. Her shots were always high, with tremendous carry. Even with a 2-iron, Mickey had no trouble hitting over a bunker or a lake guarding the green. She contacted the ball at precisely the right point in the arc of the swing and with such clubhead speed that no shot was impossible for her.”

Ben Hogan, whose action is revered by many aficionados for its efficient, repeating beauty, said, Wright “had the finest golf swing I ever saw.” And another legend, Byron Nelson, told Glenn, “For the sheer fundamentals, I’d say Mickey Wright (had the best swing).”

Born Mary Kathryn Wright on Feb. 14, 1935 in San Diego, Calif., Mickey Wright developed a keen interest in golf when she was 11, after watching Nelson and Leo Diegel give an exhibition at San Diego Country Club. As she recalled to The New York Times in 2012, Wright swung so hard on her first outing to a driving range that she broke the clubs in her beginner’s set.

Wright’s father, Arthur, an attorney and avid golfer, arranged lessons for his daughter with professional Johnny Bellante at La Jolla Country Club. Bellante, who molded the rhythmical swing of Wright’s fellow San Diegan, Gene Littler, quickly stressed the importance of timing in his raw but eager student with a switch from a eucalyptus tree bordering the practice range.

“(He) handed it to me and said, ‘Swing this and make it sing,’” Wright told the USGA in 2011. “It was an easy way to learn the conservation of energy and the principle of clubhead speed. That was the start of a lifetime of challenges for ever elusive perfection. To this day, whenever I smell the fragrance of eucalyptus, it takes me back to those first days of learning the golf swing.”

Wright was breaking 100 within a year, and her improvement accelerated after regular instruction from another area pro, Harry Pressler of San Gabriel Country Club, a stickler for fundamentals. Wright took weekly lessons from Pressler, developing the swing that would so become so effective and widely admired.

“He would physically move me into these positions so I could train my muscles to flow into them naturally,” Wright said in a lengthy interview with Golf Digest’s Guy Yocom in 2017. “My swing might have had style in terms of rhythm and tempo, but in truth it was somewhat manufactured. But it was a swing for a lifetime, and boy, did it work.”

Wright became known in national golf circles when she won the 1952 U.S. Girls’ Junior at age 17. In 1954, she was runner-up in the U.S. Women’s Amateur, won George S. May’s World Amateur Championship and tied for fourth in the U.S. Women’s Open, where she played the final 36 holes with champion Babe Zaharias, who won by a record 12 strokes in an emotional return from cancer surgery.

Convinced she was talented enough to play professionally, Wright set out on the LPGA, a fledgling circuit where the players drove large cars and played for small purses as they chased their athletic dreams.

Wright didn’t take long to win—claiming her first title at the 1956 Jacksonville Open—but didn’t truly hit her stride until she had absorbed some valuable advice from Rawls. “She didn’t respect the short game at all when she came on tour,” Rawls told Golf World in 2000. “(Ultimately) she realized that was a sure way to fail, that it took as much talent to hit good putts as good drives.”

Putts and chips never would give Wright the thrill she got from hitting a pure long iron, but she became effective on and around the greens. In the majors, the whole package was formidable. Wright lowered the U.S. Women’s Open scoring mark in winning in 1958 and ’59 and was the first to successfully defend the championship.

She won the event for the third time in 1961 at Baltusrol, drawing praise from Herbert Warren Wind, longtime golf writer for The New Yorker. “It’s hard to think of a comparable exhibition of beautifully sustained golf in a national championship,” Wind wrote, “unless it is Ben Hogan’s last two rounds at Oakland Hills in the 1951 Open.”

Wright’s fourth Open victory came in an 18-hole playoff over Ruth Jessen at San Diego Country Club in July of 1964 with her parents, who divorced when she was 3, in the gallery. But Wright was burdened by expectations and weary of the stage. “She would have been quite happy to play at dawn in front of nobody and shoot a score,” Whitworth said.

Winning 18 times over the next five seasons, Wright stepped away after playing 21 events in 1969. Bothered by foot pain that forced her to play in tennis shoes, she competed occasionally over the next decade, winning once more—the 1973 Colgate-Dinah Shore Winner’s Circle.

Wright flirted with victory one more time, losing in a playoff when she was 44 to rising star Nancy Lopez at the 1979 Coca-Cola Classic. Her last official LPGA start came the following season. “When to quit is a personal thing,” Wright told Golf World in 2000, “but I hate to see people hang on too long. I don’t like to see great ones hang on and have me feel sorry for them.”

There was nothing but delight among Wright’s peers and those golfers who followed when she put her game on public display in three straight appearances at the Sprint Senior Challenge from 1993-95. The years seemed to have done nothing to diminish Wright’s enviable action as she wowed a younger generation. “Her swing was awesome, like butter, just so smooth and effortless,” Hall of Famer Juli Inkster. “Plus, the power it had.”

Wright’s last full shot in competition came in the Sprint event on April 30, 1995 at LPGA International in Daytona Beach, Fla. Her caddie suggested a wedge for her second shot on the par-5 finishing hole, but, from a sidehill lie with the ball above her feet, Wright hit a 4-iron on the green and two-putted for birdie.

The rest of Wright’s shots would be struck outside her home in Port St. Lucie, Fla., off an artificial-turf mat toward a nearby fairway. Playing recreational rounds with something less than the skills she used to rule the sport wasn’t for her.

“I miss it terribly,” Wright told The New York Times in 2012 as the USGA Museum opened The Mickey Wright Room, its first permanent exhibit honoring a female golfer. “I like the way my life is now, but quitting golf is like quitting cigarettes. It ain’t easy.”

“Mickey was truly a special person,” said Charlie Mechem, LPGA commissioner from 1991 – 1995. “She had class, she had elegance and she had unbelievable talent. And she was a dear friend. I will miss her terribly.”

Mecham recalled his fondest memory of Wright, saying, “When I was (LPGA) commissioner, we put together a senior team event (in Tallahassee, Fla.) Mickey and Kathy Whitworth played together. She had not played in public in many, many years. We started the seniors ahead of the regular tour players and I told my wife, ‘Mickey tees off at 8:00 and I bet she’ll be on the range about 7:15. I’ve never seen her hit a shot. Let’s go to the range and see if we can watch her.’

“Well, we got there about 7:15 and there must have been 50 tour players already there just to see her swing the golf club. It was everything I had ever heard, an amazing golf swing and an amazing talent.”

Among the artifacts on display at the USGA is a set of Wright’s irons that she used from 1963 to 1985. The clubheads, thin and compact, are relics of a bygone era. But the coin-sized circles worn smooth on the center of the faces speak timelessly about a great golfer who achieved her dreams.

“When I finally stepped away for good, I had done everything I had set out to do in golf,” Wright wrote in Sports Illustrated in 2012. “There is really nothing that can give me what golf gave me. I can never replace it. I am grateful just to have had it.”