Written By: Zach Sepanik @zachsepanik
Zach spent two seasons as the communications manager on the Epson Tour before becoming a LPGA Tour media official in November of 2019. Prior to the LPGA, Zach was a sports anchor and reporter for two years with the NBC affiliate in Grand Rapids, Michigan.
﻿
0Share on Facebook
0

JACKSON DAZZLES IN DIFFICULT CONDITIONS
While the conditions played brutally difficult at the Country Club of Winter Haven for the second round of Florida’s Natural Charity Classic, Janie Jackson (Huntsville, Alabama) was not fazed. The University of Alabama alumna fired a bogey-free, 6-under par 66 to take the 36-hole lead at the same mark.

“If you had told me when I showed up at the course today that I was going to shoot bogey-free, 6-under, I would have said that you’re full of it,” said Jackson, who entered the day tied for 32nd. “It was cold and super windy. There were a few times I had to play 40-50 yards more because of wind. I’m really happy to have made it out of there not only playing well, but without any real mistakes is huge. I’ll just continue to stay patient and focused, see what happens.”

Jackson ended in a tie for 49th at the second annual LPGA Q-Series last number, just three shots outside of the top-45 which earned LPGA Tour status for the 2020 season. With plenty of time for reflection in the offseason, Jackson is more focused than ever thanks to a big life decision she made in early January.

“After Q-Series, I was pretty bummed for a week then told myself to snap out of it and do something about it so I didn’t have to feel like that again, and that’s when I decided to move to Scottsdale,” Jackson said. “Mainly for weather and good golf so I could get well prepared for the season. I’m glad I did that because typically at the start of a year I feel like I’m not ready to compete and this time I feel like I am.” 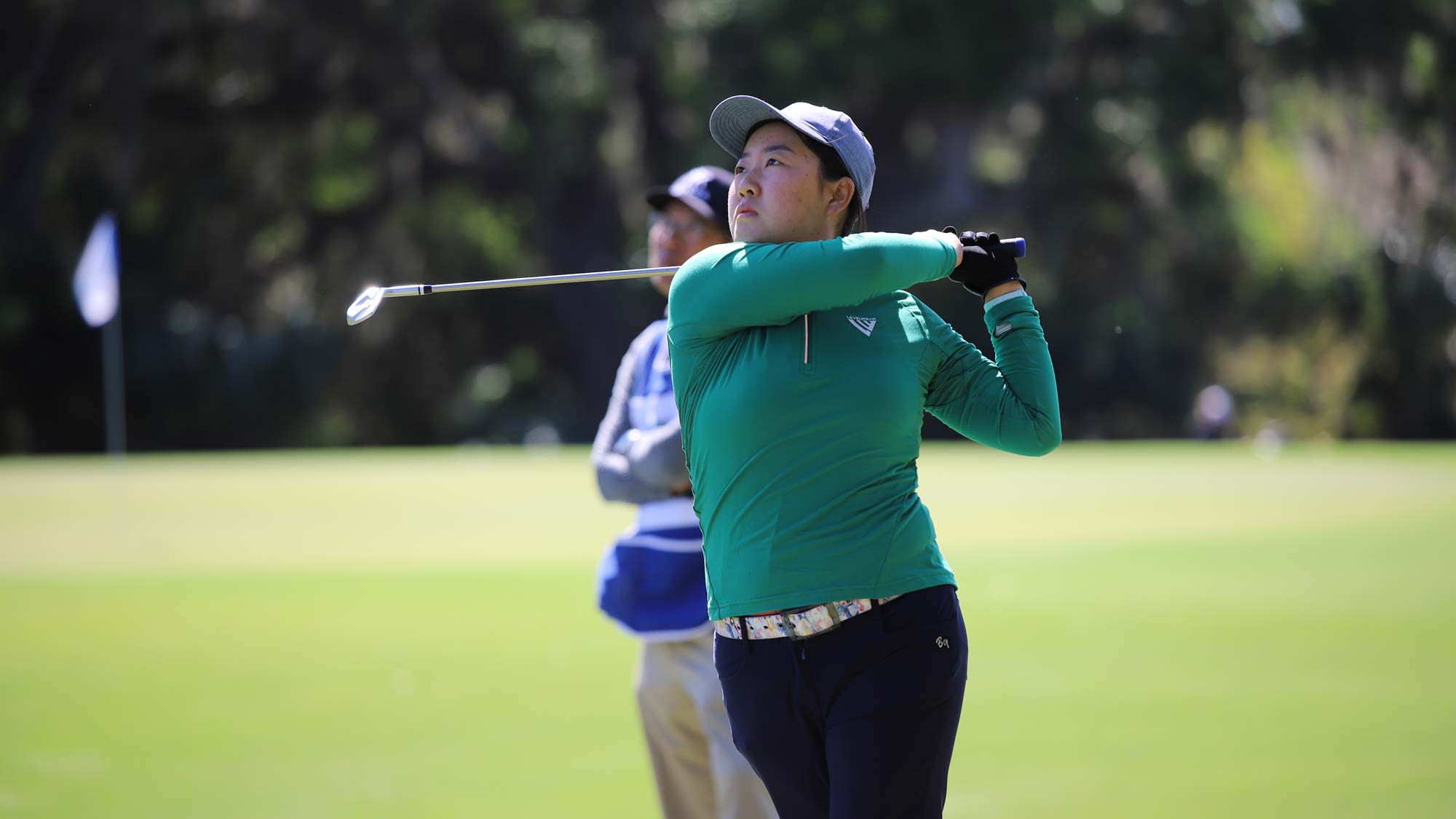 LIU GUIDED BY PATIENCE ON A BLUSTERY DAY
For Ruixin Liu (Guangdong, People’s Republic of China), it would have been easy to raise expectations in the second round when she held the outright advantage on several occasions. However, she was guided by experience and commitment to a single virtue to sign for a 1-under par 71.

“It was a struggle because I was once 2-under today and then made a double [bogey] so it feels good to come back under par, but still it’s all about being patient,” said Liu, the 2018 Epson Tour Player of the Year. “I need a lot of patience to battle this wind.”

Liu will join Jackson in the final pairing tomorrow off No. 1 tee at 1:55 p.m. ET. A 2019 LPGA Tour rookie and three-time Epson Tour champion in 2018, Liu has the mindset to try and get the job done again.

“I just won’t worry about the result and go one shot at a time,” Liu said. “It should be good. I didn’t have a good season on the LPGA last year which really taught me to be patient and not worry about outcome. That is what helped me play in the wind today and I will keep doing that tomorrow. I don’t think it [the wind] can get much worse than today.” 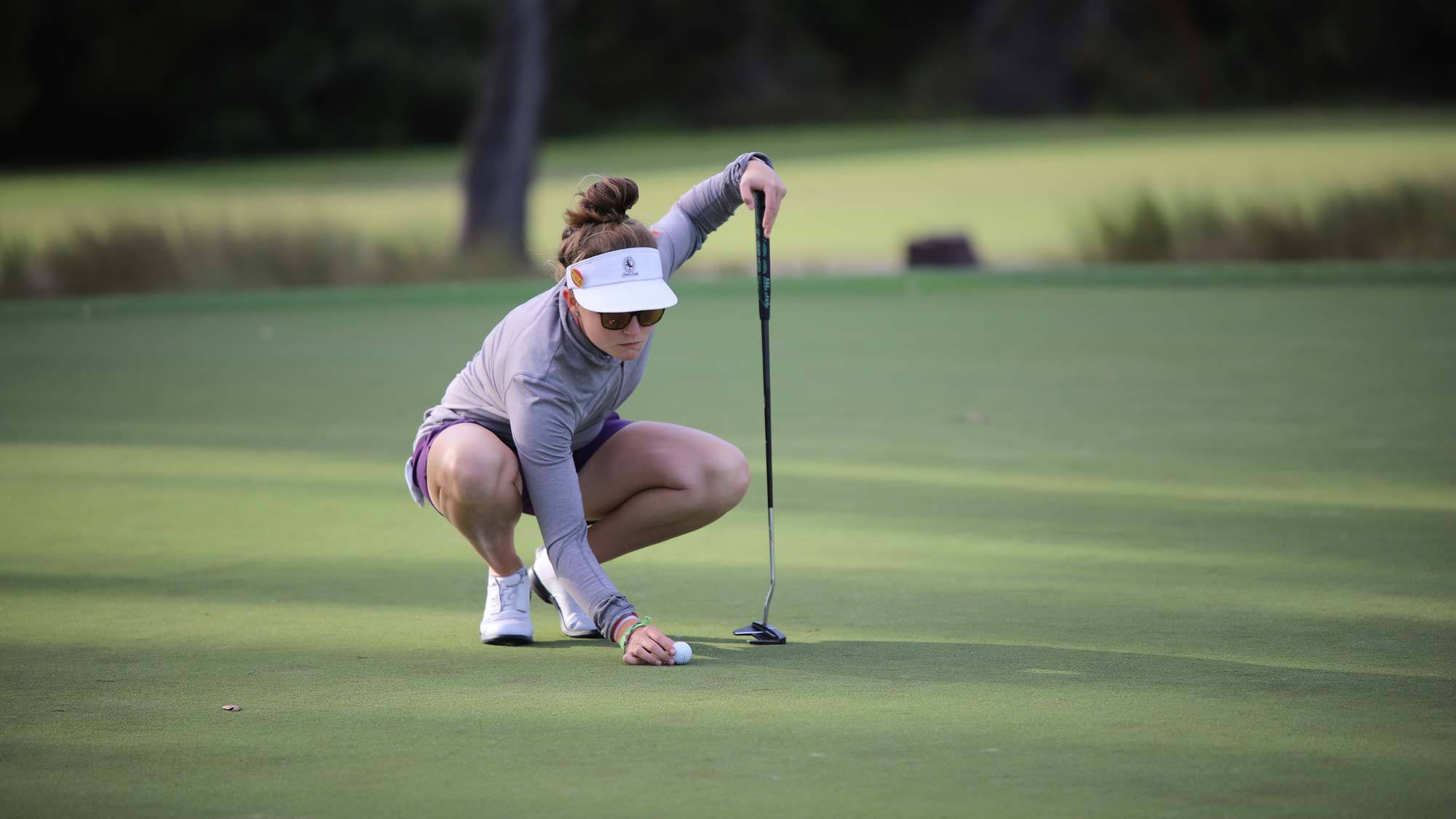 FERNANDEZ CANO WITHIN STRIKING DISTANCE
There’s no doubt that Fatima Fernandez Cano (Santiago de Compostela, Spain) has a confidence in her game to succeed. Being one of three players tied for fourth at 1-under par overall through 36 holes and five shots back of the lead is another reason she can be considered within striking distance.

“Anything can happen,” said Fernandez Cano, who signed an even par scorecard this afternoon. “I have been out here for two years and I’ve been in this position before. Coming into today, I knew it was going to be very tough. I’ve been here before and messed it up before, so my main thought was to be patient and not go after anything that might be a little too risky. Even though I got after a couple out there that I should have left, I was patient most of the time which let me take advantage of a couple opportunities.”

Now in year three on the “Road to the LPGA,” Fernandez Cano mentioned that the turning point in her belief was qualifying for and then playing in the 2019 U.S. Women’s Open. Since then, she has made the cut 13 times in 14 starts with 11 top-25 performances and one still to be determined tomorrow.

“I saw myself out there and that I could really be at the next stage,” Fernandez Cano said. “Being out there, then out here and making a bunch of cuts in a row, made me believe I have the game to be out there. My main thought this season is to get off to a faster start than last year. To do that, I tried to get more rounds of golf under my belt before this event. Play, play and play.”

NOTABLE QUOTES
Linnea Johansson (-2, 3rd) on facing the wind and surviving the day:
“It was pretty windy out there, so it was obviously challenging for everyone. You have to stay patient out there, take it one shot at a time. You don’t hit that many greens when it is like this, but can save strokes by making up and downs. The wind was tricky, side wind on a lot of holes and especially the approaches which made it a little harder. There was some tough pins tucked and the wind coming off of the water, it was a challenge for sure. I’ll stick to my gameplan, one shot at a time. There’s nothing more you can do.”

Cheyenne Woods (+5, T44) on her ace at the par-3 12th with a 5-iron from 203 yards:
“It was exciting, one of our first holes since we teed off the back [nine] and still early. It was playing really windy today and that par-3 was stretched out a little bit longer than yesterday so it was about 200 yards downwind and also wind off the left. I hit a really good 5-iron and it caught the slope then rolled in perfectly. We didn’t see it go in, but it was exciting once we got up there. That was my 10th hole-in-one and only my second in competition.”

Rebecca Lee-Bentham (+5, T44) on shooting 1-under today for only score in the red out of morning wave:
“This morning was cold and a lot windier than I think most players anticipated. The tough part was the pin locations because if the wind was blowing left to right and you had hazard on the left, pin tucked left then it was like, ‘Where do you aim?’ You either have to aim right, play a draw, or you’re aiming in the hazard. It was one of those days. My gameplan was just to pick good targets out there and commit to it. Yesterday was really brutal, nothing going for me, but I told my caddy at the end of the round I figured something out. I didn’t really have much of a warmup today and had those thoughts in my mind to keep me focused. It was much better.”