Dame Laura Davies By The Numbers

Dame Laura Davies By The Numbers

As a 20-time LPGA Tour winner, a four-time major champion and a World Golf Hall of Fame member, Dame Laura Davies has just about done it all. Now, as the LPGA Tour honors its 70th anniversary, we look at the career and record accomplishments of this exceptional Englishwoman.

Her break-through on Tour was one for the ages. Davies joined the LPGA in 1988 after winning the U.S. Women’s Open the previous year in an 18-hole playoff against Ayako Okamoto and JoAnne Carner. At the time, she was just the fifth non-LPGA professional to win an LPGA Tour event and the first, and still only, British golfer to earn a win this way.

This year, 2020, marks her 33rd season on tour. Davies has averaged 18 starts each year since her rookie season, and her performance on the course has earned her a place in the LPGA record books.

Here are some standout statistics from Laura Davies’ career on the LPGA Tour. 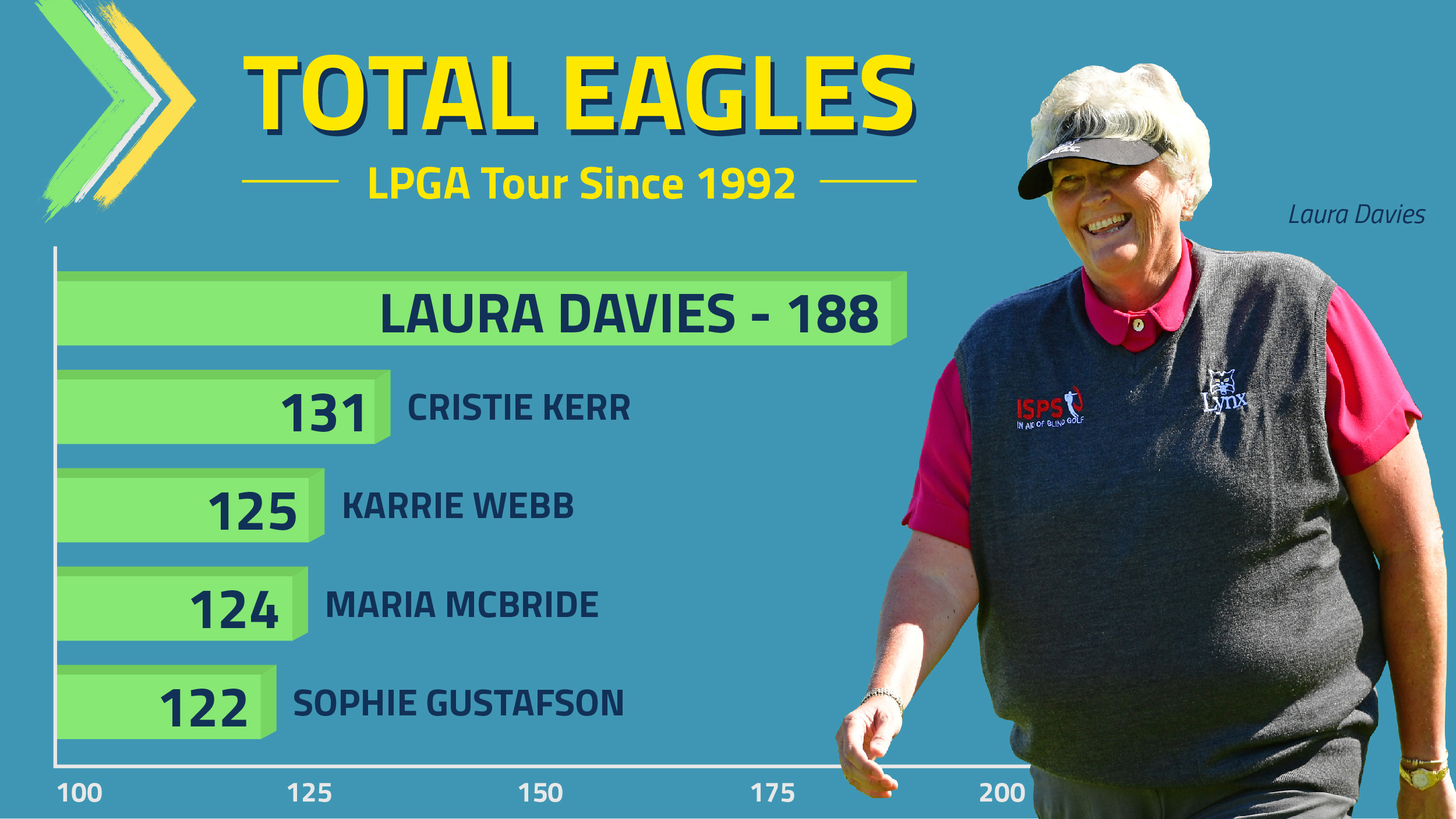 When it comes to eagles, the Dame reigns supreme. Davies has recorded 188 total eagles since 1992, averaging 6.48 per year. She has scored at least 10 eagles a season seven times with a career record of 19 in 2004. That number eclipses the second-most eagles, 131, held by Cristie Kerr.

Davies even recorded back-to-back eagles on the closing holes (No. 17 and 18) in the third round of the 2005 Weetabix Women’s British Open at Royal Birkdale Golf Club.

Davies is also one of only 40 players dating back to 1992 to record a double eagle on Tour. Her lone double eagle was recorded at the 2002 Mobile LPGA Tournament of Champions presented by Ultimate Software on the RTJ Golf Trail, Magnolia Grove, Crossings Course in the second round, on No. 13. She finished the event in a tie for ninth with a 12-under par 276 score.

For all of you that think I’ve always been old this was me in 1992. pic.twitter.com/2HyUnC6rxt

Making eagles wasn’t Davies’ only specialty during her career. The Dame was a power-hitter throughout the 90s, and it really showed from 1993-98; she ranked in the top-five in average driving distance for those six consecutive years. Davies’ cumulative driving distance during those years was 258.62 yards. The first year driving distance stats were captured (1992), Davies ranked 24th. 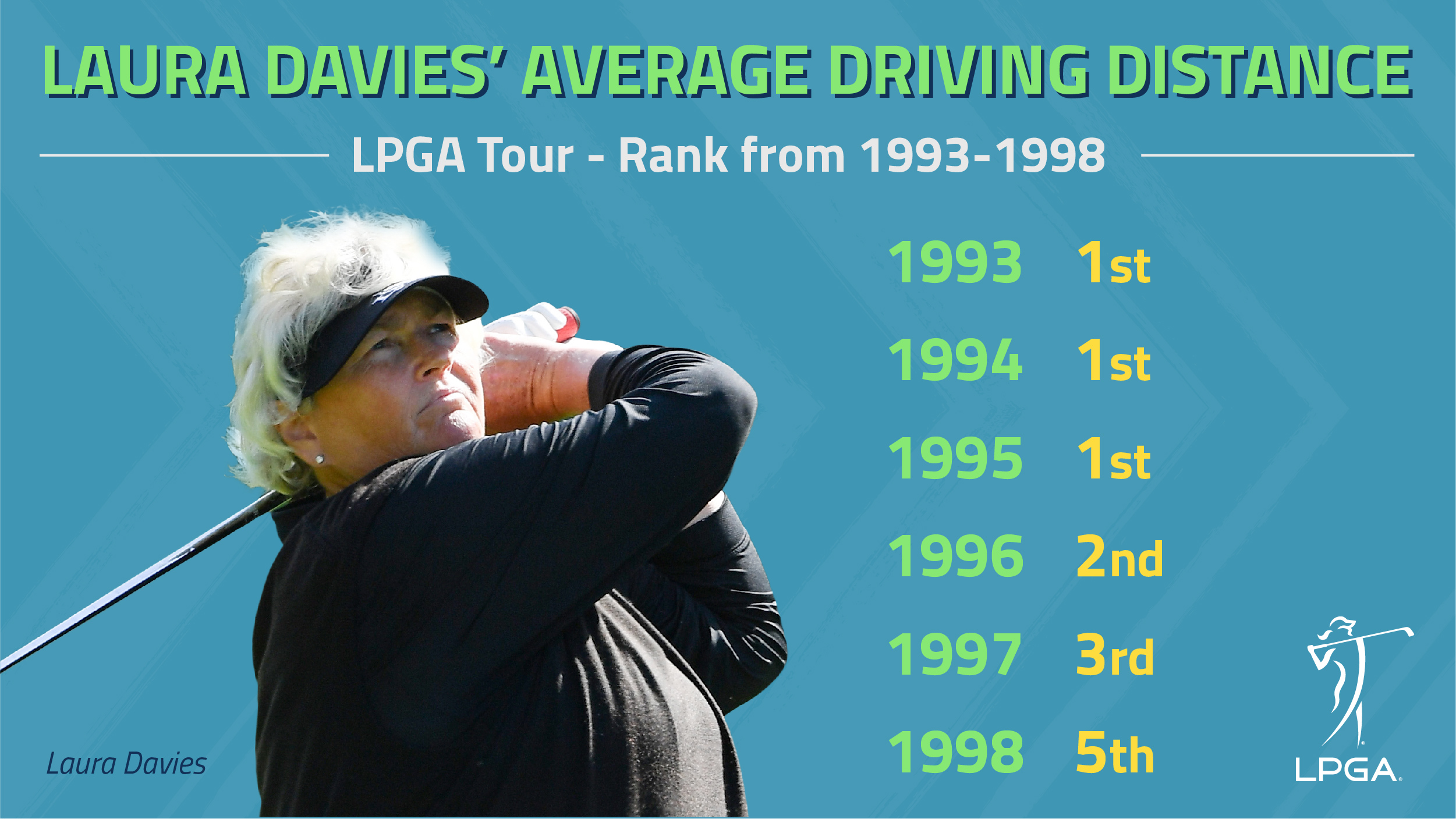 Taking a closer look into her victories, the Arizona sun shined a little brighter on Davies throughout her career. She made history when she became the first LPGA Tour player to win the same event four consecutive years at the Standard Register PING at Moon Valley Country Club in Phoenix, from 1994-97. Through those four impressive starts, Davies was a combined 50-under par with a 69.875 scoring average.

Since then, Annika Sorenstam has won five consecutive times at the Mizuno Classic from 2001-05 to hold the record for most consecutive wins in the same event.

Because of her esteemed accomplishments, Davies is now two points away from entering the LPGA Tour Hall of Fame. A fifth major title would earn her two points. If recorded at the ANA Inspiration or The Evian Championship, Davies would also complete her career grand slam.