LPGA And LET Back for the Ladies Scottish Open

LPGA And LET Back for the Ladies Scottish Open

The LPGA Tour returns along with the LET to the Home of Golf this week at The Renaissance Club in Scotland. After a successful outing in Toledo, Ohio, that resulted in back-to-back victories at the LPGA Drive On Championship and the Marathon LPGA Classic, Rolex Rankings No. 2 Danielle Kang headlines this week’s field along with Rolex Rankings No. 8 Minjee Lee, who comes off two top-four finishes.

In 2019, Mi Jung Hur came out on top with six birdies in her final nine holes to earn her first victory since 2014 and set the 72-hole tournament record at –20 in her four-stroke win. While Hur will not defend this week, past champions Ariya Jutanugarn (2018) and Mi Hyang Lee (2017) have made the trip to The Renaissance Club, as have 2019 major champions Hannah Green (KPMG Women’s PGA Championship) and Hinako Shibuno (AIG Women’s Open). The 144-player field also includes 15 of the top 20 in the Race to Costa del Sol competing for the $1.5 million purse, as well as Rose Ladies Series Order of Merit winner Charley Hull. 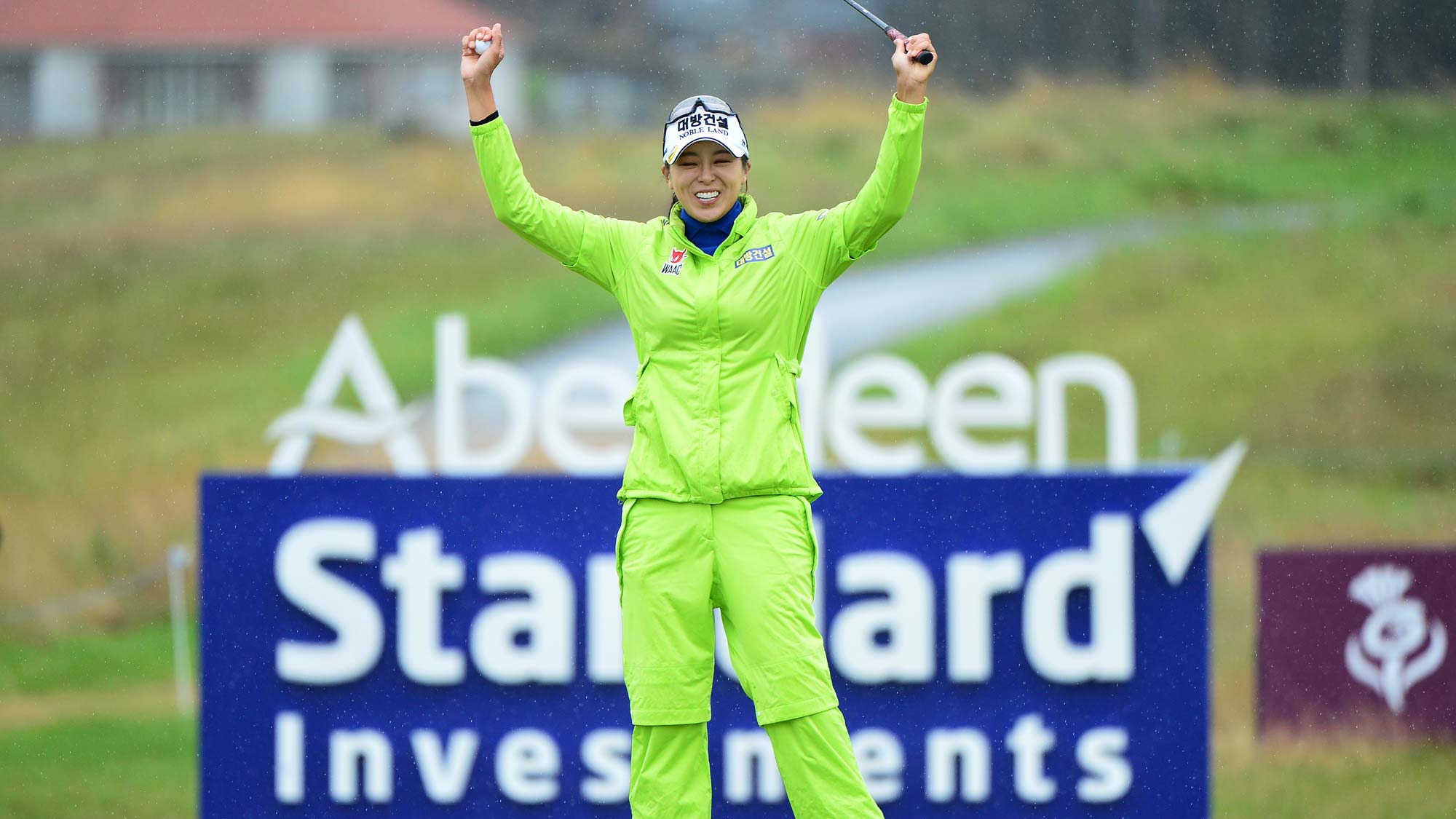 DESPITE NOT DEFENDING HER TITLE, HUR SUPPORTING ASILSO FROM AFAR

The 2019 Aberdeen Standard Investments Ladies Scottish Open was a breakthrough moment for Mi Jung Hur. After setting a tournament scoring record by finishing at -20, Hur took her first victory since 2014 and opened the floodgates to one of her best LPGA Tour season. Just six weeks later, Hur earned a second win at the Indy Women in Tech Championship and she did not miss a cut for the remainder of the 2019 season.

Hur will not defend her title this week at The Renaissance Club, opting to remain home in Korea due to travel concerns related to the COVID-19 pandemic.

“Due to my win last year and good memories, I looked forward to returning to Scotland this year. It is definitely sad that I cannot return, especially since I won’t be able to defend my title. Nevertheless, I do want to thank Aberdeen Standard Investments and Visit Scotland for continuing to run the event,” said Hur. “Additionally, I want to thank the people who’ve been supportive of me and my decisions. And, of course, I wish the best of health upon those who will go to the event. Although I will be holed up here in Korea, I look forward to watching the event via TV and other media platforms and supporting from afar. Even though I can't be a part of this great tournament this year, I will definitely go back and repay the fans for their support.”

As the LPGA and LET touch down in Scotland this week, players, caddies and staff at the Aberdeen Standard Investments Ladies Scottish Open are determined to make the tournament a success by adhering to extensive health measures. Face masks and sanitizers can be found aplenty, with social distancing the new normal from the course to the clubhouse. These guidelines were key for players like major champion and Scotland native Catriona Matthew, who committed after learning of the tournament’s safety procedures.

“The players, I would say, are being very good at keeping their distance, wearing the face mask, hand sanitizing,” said Matthew. “Like anyone, I was nervous. There are a lot of players coming from other countries where perhaps the virus rates are higher but now you're here and you can see it all happening. I think all the hard work that's been done by varying different bodies is really paying off, and I feel very happy and excited to be starting play.”

Matthew kept active during the lockdown in her home country by using a Peloton to keep her competitive edge while staying healthy indoors. She is thrilled to be competing as a past champion of the Ladies Scottish Open, but Matthew isn’t the only one ready to watch the women tee it up again. Alan Grant, senior golf manager of Visit Scotland, said the Scottish government, Visit Scotland and Aberdeen Standard Investments worked hard to help bring professional women’s sport back to the Home of Golf.

“I think it's great to see the return of not only women's golf, but international women's sport to Scotland and the U.K. this week and we are very proud of the role that Scotland has played in this, helping down the line of commitment across sport and society and you're obviously building on the success that we had at the Solheim Cup last year,” said Grant.

“I must say, just really looking forward to playing in it. Obviously, it's going to be different being for the local community this year that none of them can physically come and watch it, but as someone said earlier, hopefully people will be watching on television. I myself, I didn't realize how much live sport I didn't watch on TV until there wasn't any. I was struggling to find things to watch,” said Matthew. “I think people are excited. I've been watching some of the men's golf on television and I think people are just excited and it gives them something to watch on the TV and to have women's golf, women's sport up there will be good and I'm really looking forward to these next two weeks.”

With her wins at the LPGA Drive On Championship and Marathon LPGA Classic presented by Dana, Danielle Kang has secured the No. 2 spot in the Rolex Women’s World Golf Rankings, becoming the highest-ranked American after her first win in Toledo.

The current average points differential between Kang and World No. 1 Jin Young Ko is 1.55 average points. It has been a year since the difference between the top two ranks was this small, as the average over the last 50 weeks was 2.54 average points. Ko has been ranked No. 1 for 55 consecutive weeks.

In her last seven starts on the LPGA Tour, Danielle Kang has recorded three wins, one second-place finish and two third-place finishes.

Nelly Korda slipped to No. 4 after finishing T38 at the Marathon LPGA Classic, while Sung Hyun Park moved up to No. 3. Park has not competed on the LPGA Tour in 2020 and last competed on the Korean LPGA (KLPGA) in the 42nd KLPGA Championship back in May.

At last week’s Marathon LPGA Classic presented by Dana, 10 spots were available for the 2020 AIG Women’s Open, to be held Aug. 20-23 at Royal Troon in Scotland. The 10 spots were determined by the players with the 10 lowest scores after 72 holes at the Marathon LPGA Classic whowere not already exempt into the major championship, with tiebreakers to break any ties for the 10th spot. The following 10 players qualified: Emma Talley, Andrea Lee, Patty Tavatanakit, Maria Fassi, Kendall Dye, Sophia Popov, Kelly Tan, Peiyun Chien, Dottie Ardina and Lindy Duncan (winner of tiebreaker with Elizabeth Szokol and Matilda Castren).

At this week’s Aberdeen Asset Management Ladies Scottish Open, there are no less than 21 spots allocated for players to earn their way AIG Women’s Open in lieu of a qualifying tournament, including a spot for this week’s champion if she is not already otherwise qualified.

The AXA LPGA Volunteer Service Award is a program launched in 2018 to recognize exemplary volunteers at each LPGA tournament. This week’s award recipient is Pam Jack, who was nominated for her service at the Aberdeen Standard Investments Ladies Scottish Open.

After the 2020 season, the name of one AXA LPGA Volunteer Award recipient will be drawn in a random selection. That winning volunteer’s tournament charity will be awarded $10,000 on behalf of AXA.