During a pandemic year when the nation’s greatest challenge has been to avoid contact with others, perhaps the greatest irony occurred during a flood disaster in central Michigan, where an entire community experienced the biggest embrace possible.

Midland, Mich., was gearing up to host the Dow Great Lakes Bay Invitational during the week of July 13, but the LPGA Tour’s season had already faced numerous tournament delays and cancellations. Ultimately, COVID-19 concerns forced the Midland tournament to also put the brakes on its event in 2020.

“We decided with our client, Dow, that the reason our tournament had experienced such success was from all of the other aspects of it from a fan experience,” said Mark Baczewski, event director for Octagon’s tournament management team. “Given the restrictions and unknown circumstances with COVID-19 at the time, it didn’t make sense to hold the tournament if we didn’t have interaction with the fans.”

But about a week after that decision was made, the Great Lakes Bay Region community experienced another life-altering event that impacted several counties.

It started on May 19, when heavy rains pounded the region, dumping the contents of one lake into another when two rivers overflowed and eventually broke through the walls of two aging dams. Floodwaters swallowed 114 houses and damaged 4,000 homes in a path of destruction.

Bridges and roads washed out, homes disappeared in the floodwaters and cars and boats floated away. Of the homes that did not completely vanish in the flood, gallons of water rushed in, bringing along mud and debris and forcing residents to flee.

“The emotions of a major flood in the middle of pandemic took a toll on everyone in our community,” Baczewski said. “It was incredibly difficult for people to face the unknown as they evacuated their homes.” 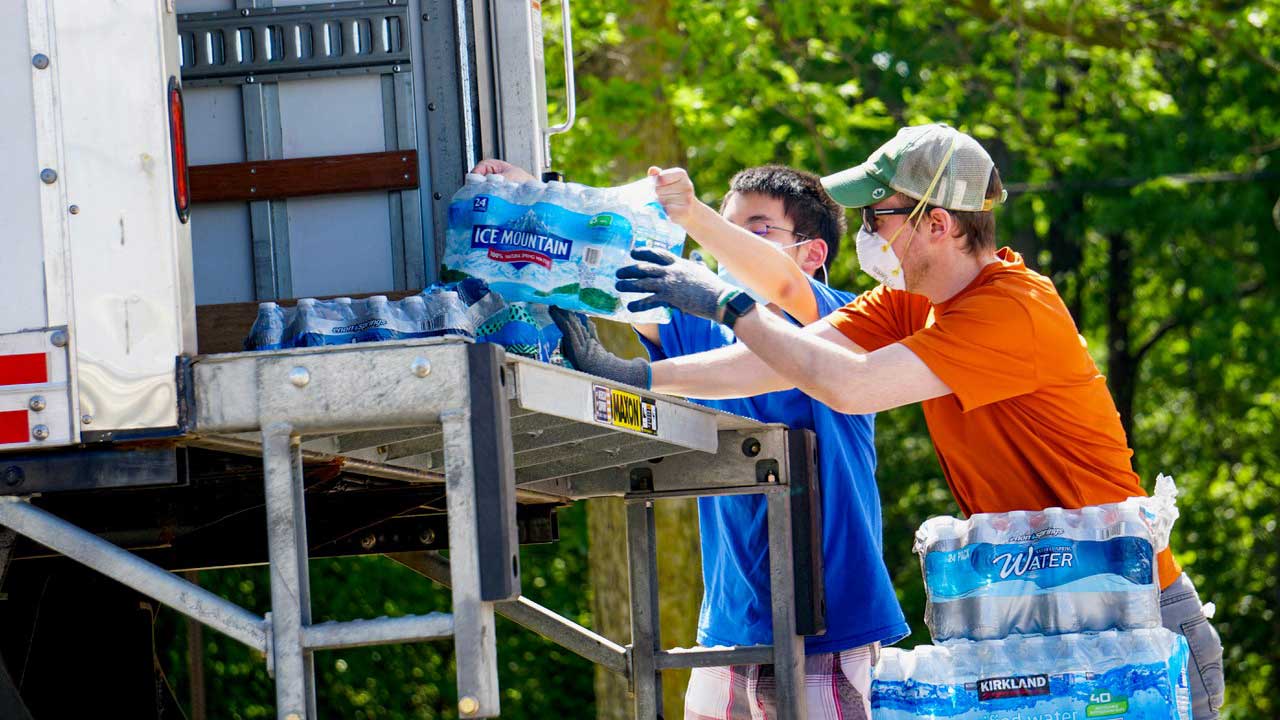 Remarkably, there were no deaths in an event that left an estimated $150 million in residential damage and untold damage for businesses and infrastructure. The Detroit Free Press reported that rebuilding the compromised Edenville and Sanford dams will cost an estimated $300 million or more.

“Even FEMA has told us that our community and our region is doing something that nobody has ever done, and that is responding to a huge disaster during the middle of a pandemic,” added Holly Miller, president and CEO of United Way of Midland County. “I think this truly illustrates the fabric of our community with the volunteers who have leaned in to help, whether through formal or individual volunteerism.”

Miller said some 3,800 volunteers have invested more than 18,522 hours since the floodwaters impacted the Greater Midland community. In-kind donations totaling more than $1.52 million from 210 organizations have helped displaced families. At least 51 households have received help with restoration resulting from water damage.

Bre Sklar and her husband were like many Midland citizens receiving text alerts on their mobile phones, warning of the dam breach. Both military veterans, Sklar had a gut feeling this alert signaled tough times ahead for her home region.

“We knew immediately how catastrophic it was going to be, so we set up a Facebook page in our area [Mid-Michigan Dam Emergency Relief Support Group] to start making sure that everybody was getting out safely and that they were getting good information,” Sklar said. “Once the water receded, we got our own volunteer groups out there to help start demolition and muck-outs of affected homes. That was our key focus for the first 60 days.”

Sklar, who worked in a local bank’s wealth management department, organized a group of 30 citizens who donned work boots, work gloves and handled giant buckets and shovels to help haul debris out of residents’ flood-impacted homes.

“For the houses where the water was 4 feet deep, we would go in, rip out the walls, insulation, cabinetry and flooring where we could tell there was moisture to try to prevent mold from forming,” said Sklar, who served in the U.S. Army as a generator mechanic.

Church and civic groups, local veterans groups and labor unions, and countless citizens also offered help in the recovery and rebuilding efforts. Dow employees pitched in to help, as did the LPGA tournament’s Octagon event team.

“So many people wrapped their arms around this with neighbors helping neighbors,” said Sklar, who was hired two months ago as the flood recovery volunteer manager by United Way of Midland County. “It’s been pretty miraculous.”

Eight resource distribution centers were set up around the Great Lakes Bay Region to get much-needed supplies out to citizens. Dow turned its corporate aviation hangar at MBS International Airport into the primary hub to stage supply distribution to the other centers. Member of Team Dow connected with their network of global partners, suppliers and customers to source more donations and soon the hangar was filled with items to assist those who had lost everything in the flood. 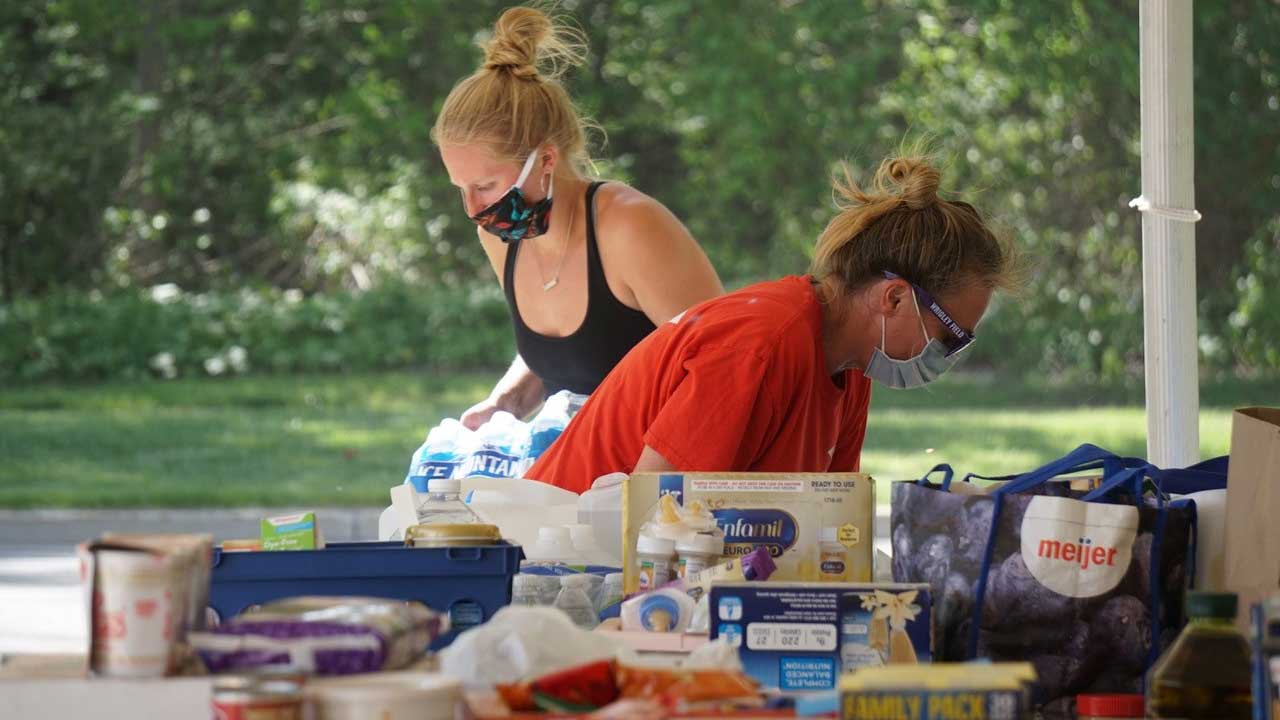 Megan Clark, an improvement manager at Dow, volunteered at the Meridian Elementary School distribution center in the hard-hit Sanford community. Clark said at least 60 families there had been completely displaced.

She and her husband joined a group of 500 job volunteers in the Sanford area alone, who logged some 2,000 volunteer hours assisting in flood-relief efforts. Volunteers at that site picked up more than an estimated one million pounds of debris by hand alongside the machinery doing the heavy lifting, she noted.

“In one of the locations, we had children as young as 3 helping with the non-hazardous cleanup,” said Clark. “Everybody was there working together and it’s those times that bring the hope back that we’re going to continue as a community.”

“The warehouse at the elementary school filled the entire gymnasium and the whole lobby area,” Clark said. “The need is going to be here for a long time, especially as we move into winter. It’s really critical to continue showing support.”

Tournament volunteers of the Dow Great Lakes Bay Invitational were also given an opportunity to support the region’s flood-relief efforts. Volunteers at tournaments pay a registration fee, which had already been collected by those planning to work at the 2020 event. Those volunteers were given the option to donate their fees to assist the community or to roll over their fees to 2021 tournament.

The response was overwhelming, with the give-back program collecting a total of $8,490, with the funds donated to the Eastern Michigan Food Bank. The food bank then supplied 50,940 meals to those displaced and affected by the floodwaters.

“We are in this community and it made a lot of sense for us to help,” said Baczewski, who has assisted with Midland’s recovery efforts. “United Way has done a really good job keeping tabs on who needs assistance and what assistance they need while working with the food bank, Habitat for Humanity and the Salvation Army.”

Running such a large-scale recovery effort during a pandemic has made volunteer and agency efforts even more challenging, but Miller noted that protocols for volunteer safety were created and have been followed throughout the process. To date, no volunteers have contracted the COVID-19 virus.

“We have a very intentional case management system working with our long-term disaster recovery group who works with every home-owner who has reported damage,” Miller added. “Our goal is to get them safely back into their home to live there.”

Midland’s flood-recovery efforts are now fully focused on rebuilding and getting residents into safe shelter during the approaching winter months. They are down to one warehouse, which Sklar still manages.

In addition to dispensing needed supplies, Sklar and a volunteer team hand-delivered 3,000 packets of information to residents with information kits to register for FEMA assistance.

Miller called the coordination of Midland’s flood-relief efforts a “logistical challenge,” but praised the contributions of Dow, its employees and volunteers, as well as the volunteers and staff at the Dow Great Lakes Bay Invitational.

“The LPGA tournament has been such a blessing to our community and even though they didn’t hold the event this year, they have still blessed our community by lending their time, resources and expertise,” Miller added. “This experience may be one of the worst in our history, but it has also brought out the best in our people.”

And the irony of COVID-19 continues to play out in Michigan as restoration continues and neighbors are still laser-focused on helping neighbors, added Baczewski.

“Maybe we can’t physically touch or be near each other, but this flood relief effort has touched so many people in such a meaningful way,” he said. “We still have a way to go to build back, but things are looking up.”

Want to help? Donate to:  https://eportal.unitedwaymidland.org/servlet/eAndar.article/997/Rise-Together-Fund

The AXA LPGA Volunteer Award program will designate a top volunteer nominee at each of the LPGA’s tournaments. At the conclusion of the 2020 season, the name of one volunteer will be drawn in a random selection. That winning volunteer’s tournament charity will be awarded $10,000 on behalf of AXA.

AXA XL, the property & casualty and specialty risk division of AXA, provides insurance and risk management products and services for mid-sized companies through to large multinationals, and reinsurance solutions to insurance companies globally. AXA XL proudly serves as the Official Property/Casualty, Reinsurance, Auto and Professional Liability Insurance Sponsor of the LPGA.  Additionally AXA XL has partnered with the LPGA on a season-long AXA LPGA Volunteer Service Award which recognizes tournament volunteers who have exemplified the spirit of volunteerism and gone above and beyond expectations.  For more information, please visit www.axaxl.com