Reflecting On A Life-Changing Week

Reflecting On A Life-Changing Week

Like everyone else, I was swept up in the emotion of watching my fellow European Sophia Popov win the AIG Women’s Open.

But unlike the millions who saw it on television, I was there. I shot 70 on Sunday at Royal Troon, my best round of the week. Then I watched history as Sophia became the lowest-ranked player in the history of the Rolex Rankings to win a major championship.

As the tears flowed on the 18th green and Sophia embraced her boyfriend, I felt a welling in my own eyes. I know exactly how that moment feels. I know the joy and the relief, the weight that is lifted and the questions that have finally been answered.

My first win was also a major, the 2018 ANA Inspiration, which I won in an eight-hole sudden-death playoff that extended into Monday morning. Like Sophia, I had played professional golf a long time - 193 starts on the LPGA Tour to be exact - without a victory. Like Sophia and many others who have had successful junior and college careers but struggled at the next level, I doubted myself. I wondered if I would ever break through and reach the top. But there was always something that brought me back. Even at my lowest points, there were incremental improvements each and every year that made me believe in myself. Even without a victory, those moments, combined with the fact that I am extremely stubborn and incredibly competitive, made me know that I was where I belonged. I also had a team around me that kept believing in me, encouraging me to continue to pursue my dreams on the LPGA Tour.

In addition to having my fiancé (now my husband) Daniel Taylor caddying for me, Patrik Jonsson, my swing coach since 2011, has been a huge part of my success. I look at the shots I’m able to hit now and I realize that the work we have done on my golf swing has made a huge difference. But it is the confidence that I gained after starting my work with putting coach Jon Karlsen that put me over the top. Jon straightened me out by simplifying things. First, he asked, “Can you aim straight?” We tested that and he said, “You’re great at aiming.” Then he asked, “Can you start the ball where you want to start it?” The answer to that was: yes. So, Jon said, “Ok, if you can do those two things, why worry about how your stroke looks?” 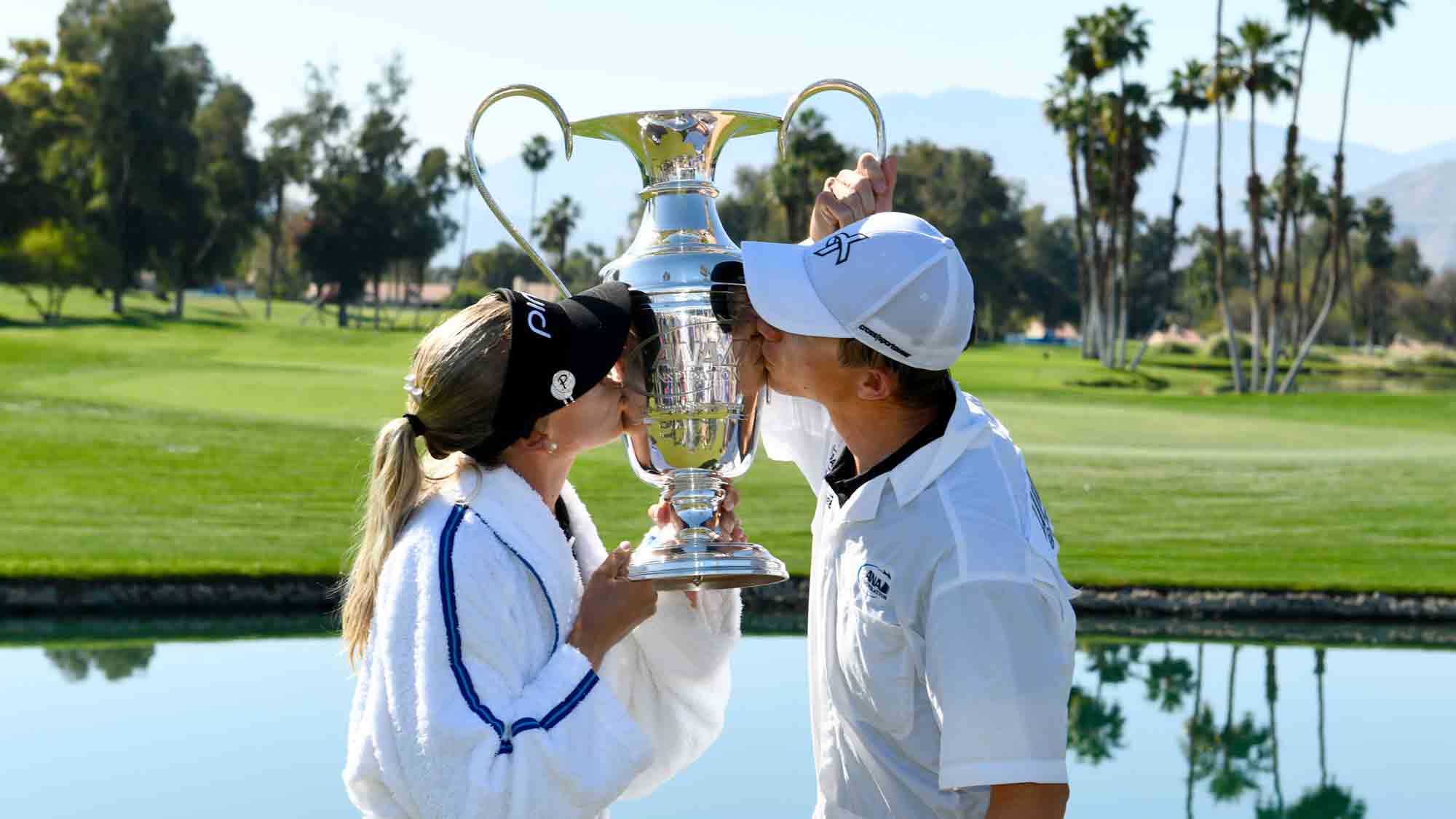 Pernilla Lindberg of Sweden kisses the winner's trophy with her fiance Daniel Taylor after defeating Inbe Park of South Korea during the sudden death playoff on the eighth hole during the final round of the ANA Inspiration on the Dinah Shore Tournament Course at Mission Hills Country Club on April 2, 2018 in Rancho Mirage, California. Play resumed today after play was suspended due to darkness yesterday. (Photo by Robert Laberge/Getty Images)
That was the moment I overcame many of my insecurities and realized that I was a great putter.

That confidence was certainly on display at Mission Hills during my ANA Inspiration win. For starters, I’ve always loved the greens on the Dinah Shore Tournament Course. I love the pace, and I feel like I see the contours really well. All I have to do is get the ball started on a good line and I feel like I’m going to make a lot of putts. That week in 2018, I made more than my fair share. I felt like every putt, no matter how long or difficult, was going in the hole. Many of them did, including a downhill eight-footer on the sixth playoff hole and a 30-footer on the eighth playoff hole to win.

I’ve had those sorts of putting weeks before, but they haven’t been matched up with my long game. That week in California, everything clicked.

One of my fondest memories from that win was having my parents and Jon, my putting coach, there for the final round and the playoff. He and his family were on vacation in Arizona and he decided to drive over for my win. And while I get my stubbornness and competitiveness from my dad, I get my optimism from my mom. Dad is a worrier. Once the first 72 holes were over and I was tied with Inbee Park and Jennifer Song, Dad told Jon, “It’s going to be tough because Inbee is the best putter in the world.” Jon said, “What do you mean? Pernilla is the best putter in the world.” 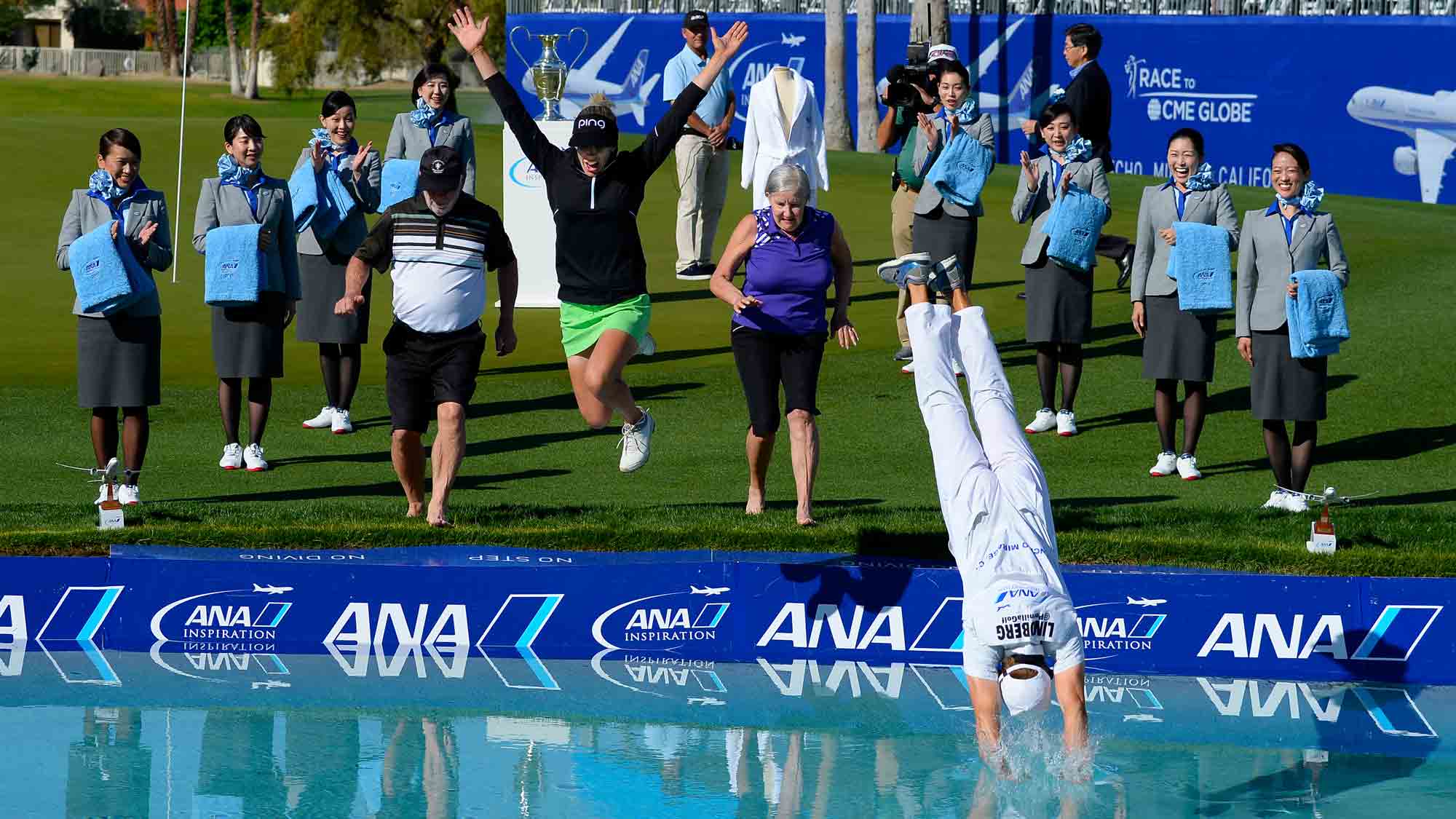 Pernilla Lindberg of Sweden jumps into the water with her fiance Daniel Taylor and her parents Jan and Gunilla Lindberg after winning the the ANA Inspiration on the Dinah Shore Tournament Course at Mission Hills Country Club on April 2, 2018 in Rancho Mirage, California. (Photo by Robert Laberge/Getty Images)

I certainly felt like the best putter that week. It was magical in so many ways, not the least of which was all the attention I got afterward. For the first two weeks following my win, I made a decision to say yes to every request. Whether it was Swedish television in the middle of the night or a Florida radio station early in the morning, I agreed to every interview. It was exhausting and it might have hurt my game. The further away I get from it, the less overwhelming it seems but at the time I didn’t leave myself much time to reflect on what I had accomplished and what it meant for my life. But I wouldn’t change a thing.

Next week, as I return to Mission Hills for another ANA Inspiration, I will reflect on it again, especially as I walk along the bridge at 18 and see my name among the other great champions.

I’m so happy my mom and dad introduced me to golf. I wouldn’t be the person I am without it. I remember playing in club events in Sweden when I was 12 years old with men and women in their 70s. I had three or four uninterrupted hours with older generations who taught me about behavior, manners, overcoming adversity, discipline, tenacity, hard work and many other noble and invaluable traits.

Golf did that for me. You don’t have to win on the LPGA Tour, or even play competitively, for the game to do the same for you.
Comments