Knowing Who I Am

Knowing Who I Am

Shasta Averyhardt started playing golf at the early age of seven years old and is a current member of the Epson Tour
Topic: epson-tour Drive On shasta-averyhardt

EDITOR'S NOTE: The LPGA has, from its inception, embraced diversity in all forms. We celebrate that history with stories of inclusion from the LPGA Tour, Epson Tour, LPGA Professionals, LPGA Amateurs and LPGA*USGA Girls Golf.

We never had race conversations or race-related articles written about me as a young golfer growing up in Flint, Michigan. It took carding a 69 in the first round of Q-school in 2010 for the story to change, when fans recognized my Latina mother and Black father cheering me on. As a multi-racial female many people have looked at me and wondered where I came from or what I am. But before diving deeper and asking the questions, they looked at me like I was a golfer just like everybody else.

Today, it is so much more than that.

I know my history and who came before me. But after I earned conditional LPGA membership at that Q-school the meaning of having become only the LPGA’s fourth African American Tour member struck me. It was a big deal for me because it was more about golf and my dream of playing on the LPGA Tour. But it was a big deal for other people because it was about more than golf.

There was a lot of media buzz as I headed into my first LPGA season. To be honest, I felt like I needed to represent a lot of people. I was following in the footsteps of Althea Gibson, Renee Powell and LaRee Sugg and needed to step up my game.

But I had a secret. I had tendonitis in both wrists, especially in my left wrist. I didn’t even tell my parents for two months. It was my first year as an LPGA member, so I felt like I had to set the pace for my confidence. I tried to play through it, but I wasn’t playing well. I didn’t understand that I could have taken a medical leave. I was living in the dream and I didn’t want to leave it.

I lost my card at the end of the season and went back to playing full time on the Epson Tour. By then, my wrists had healed, and I had my best year as a professional, making 12 of 15 cuts and posting a career-best tie for fourth. I told myself that what was important was playing good golf.

I returned to Q-school in 2012 with renewed confidence and actually chipped in for birdie on my last hole to earn conditional LPGA status for 2013. It meant a lot to be able to start over healthy on the LPGA Tour. But securing sponsorships was difficult. I knew I needed a lot of support financially. “Sisters Across America,” a group of minority businesswomen who sponsor aspiring minority LPGA Tour players, helped as much as it could. I ended up only playing a few tournaments and fell into a depression. I went back to the Epson Tour in 2014 and made one cut in three tournaments. Something had to change.

I ended up taking a job as a tax associate at Price Waterhouse Cooper for three years. It was cool having a regular paycheck and responsibilities in the tax department. I was able to pre-plan vacations and I was getting accustomed to corporate life. I also considered going into wealth management, but I just couldn’t make a commitment to take the exam or to become a CPA.

Around that time, another Epson Tour player asked if I wanted to do a women-in-sport podcast with her? We decided to attend the 2015 espnW Women + Sport Summit in Chicago to connect with other athletes. Women Olympians were on stage telling their stories. I was happy for them, but a great regret came over me. I felt sick. And then it hit me: the reason I had been unable to commit to anything was because I still wanted to play. I left golf because I couldn’t afford it, not because of my talent or skill level. I had suffered a lot of disappointments, but I knew I needed to try again.

So, I left my tax job and began practicing. I started a GoFundMe page to get financial support for the first stage of Q-school and raised enough money to cover to costs of all of first stage and most of second stage.

In many ways, my career has been an emotional rollercoaster. For a long time, I could not figure out why I couldn’t blossom. But in looking back on my 20s, I’ve realized that maybe I really didn’t know who I was. I knew what I was supposed to be doing, but there were always the questions: “Who am I?”  “What do I stand for?” “Why do I believe what I believe?”

Stepping away from golf gave me an opportunity to figure out who I am. I had to go through the emotional turmoil. I had to be sad that I wasn’t playing.

When I came back to professional golf, I discovered there were people like me asking the same questions. We established a bond and a support system. Now, I’m really close to Cheyenne Woods, Sadena Parks, Sierra Sims, Alexis Belton and a lot of other players on the Epson and LPGA tours. Admittedly, there was a time when I was pretty closed off and didn’t know how to connect. Maybe that went back to cultural differences. Now, there are players out here who understand each other, who share information and motivate each other.

I tell younger players that everything boils down to self-belief. I remind them that they have already seen some good results. I tell them to never let anybody detour them away from their vision.

I have learned that my journey is not only about me. It’s about being able to help the generation behind me. Attending Jackson State University, an Historically Black College and University and playing golf professionally is pretty special. I really hope there will be more HBCU players on Tour in the future.

I still want to give professional golf more time. I want another chance to play the LPGA Tour. But this time, I’m going to let life unfold.

My pathway is different than what I thought it would be. But for sure, now I have the most important component in place. Now, I know who I am. 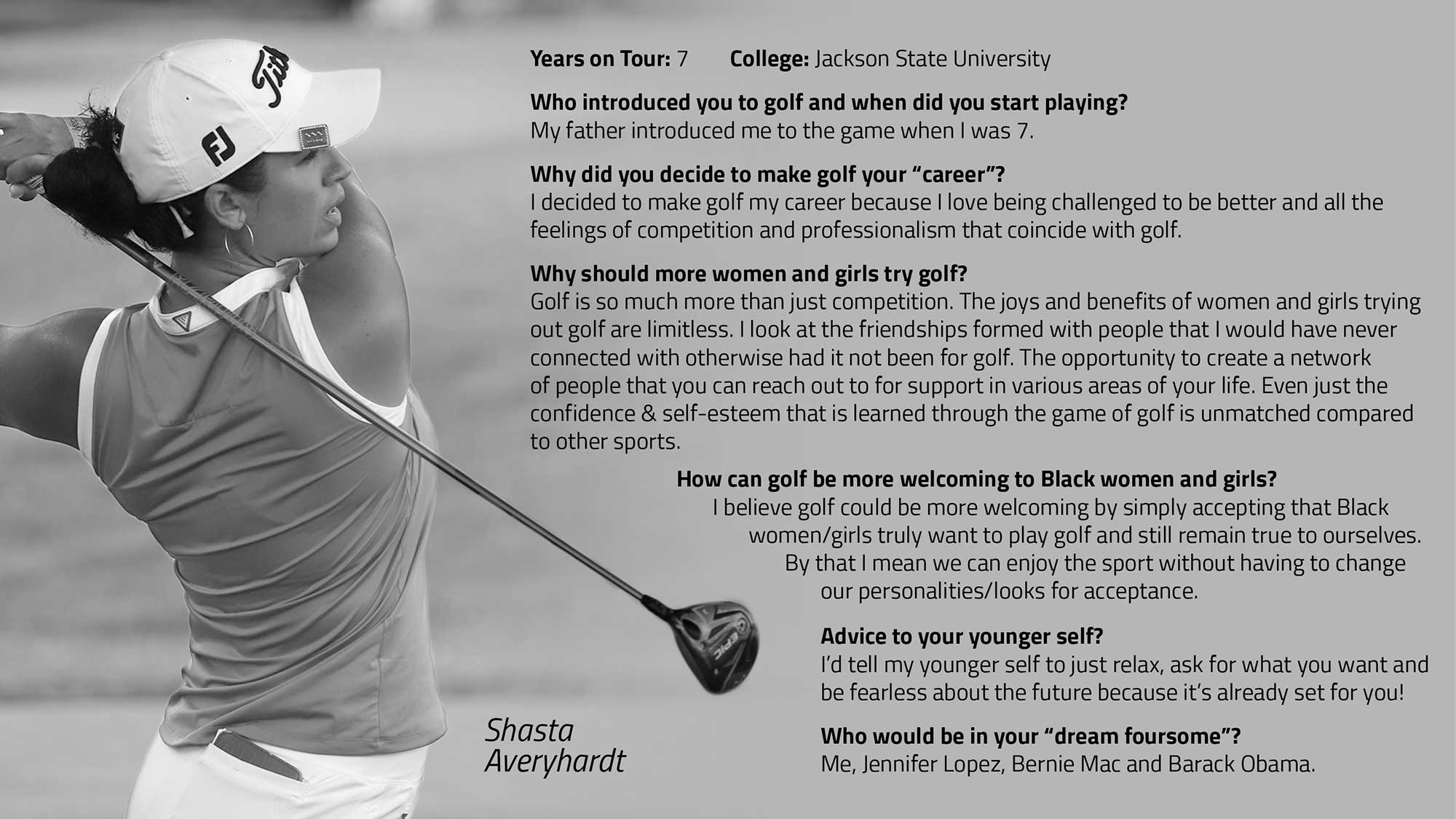