A Moment Bigger Than the Day

A Moment Bigger Than the Day

BELLEAIR, FLORIDA | They turned their backs on the players, not in protest, but out of respect for something deeper and more profound. At 10:00 a.m. on Thursday morning, just as Esther Henseleit, Moriya Jutanugarn and A Lim Kim spotted their balls on the 18th green, scores of fans turned away from the players and toward a giant American flag outside the clubhouse, waving like a lazy hand in the morning breeze.

The mayor of Belleair was there. So was Dan Doyle, owner of Pelican Golf Club and the man responsible for this event’s creation. There were also several club members in their cobalt blue jackets with the Pelican logo on the breast. They were all there to honor our veterans, many of whom were scattered throughout the crowd.

Commander Dan O’Shea, retired United States Navy SEAL put his hands on a podium beneath the flag and began his remarks.

“Fighting (in Europe in 1918) had ceased on the 11th hour of the 11th day of the 11th month, a time known as Armistice Day,” O’Shea said. “It is for that reason that November 11th is regarded as the final day of the War to End all Wars.”

He then paused and said, “If only that were true. Only the dead have seen the end of war.”

After another heartbeat, O’Shea continued. “Our country was founded on war. We have seen 20 major attacks and conflicts since the War for Independence: The Barbary Wars, the War of 1812, the Civil War, the Spanish American War, World War I, Pearl Harbor, World War II, Korea, Vietnam, Grenada, Panama, the first Gulf War, 9/11, the invasion of Iraq, and our nation’s longest conflict, Afghanistan.

“Every generation since the colonies established our first militia in 1636, has relied upon veterans. For 385 years, Americans have depended on us to defend and protect our way of life and what America represents to the world. Our veterans today are volunteers from all 50 states, just like those from the first Continental Army came from all 13 colonies. Our first veterans gave us this nation, which was founded on the ideals of equality, liberty, opportunity, civil rights and free and fair elections. We wouldn’t have the concepts of freedom of speech, freedom of religion, freedom of assembly were it not for veterans who were willing to serve, and in many cases make the ultimate sacrifice, dying for these principles in places like Europe, Latin America, Asia, Africa and Central Asia. Today is a celebration to honor America’s veterans for their patriotism, their love of country, and their willingness to sacrifice for the common good all over the globe.

“Veterans serve and die for these principles. And every veteran, especially those who served during a time of war, writes a blank check, payable to the United States of America, a solemn pledge that can cost us our financial wealth, our privileges, our limbs and our lives. It sometimes means a loss of faith in the very institutions that send us to war. But it doesn’t mean a loss in our core beliefs of what America stands for.”

He noted those of his generation that sacrificed. More than 3 million Americans served in Operation Enduring Freedom and Operation Iraqi Freedom after 9/11. And more than $4 trillion in national treasure was poured into those efforts. But the cost that has no price tag was even greater. More than 7,000 American lives were lost in our nation’s two longest wars. The Iraq War ended with 4,431 American servicemen and women killed in action. A staggering 31,994 were wounded in action. Afghanistan cost American families more than 2,400 lives with more than 20,000 injured.

O’Shea has taken off the uniform. But he is still in the fight. His organization, Task Force Pineapple, which includes retired special operators from all branches, was founded by retired Green Beret Scott Mann to extract those stranded in Afghanistan. On August 25th alone, in a mission known as the Pineapple Express, Task Force Pineapple, working with SEAL operators inside Afghanistan, rescued more than 500 people.

To date, O’Shea and his allies have extracted 1,200 Americans and American allies from hostile territory. Many of those recent extractions have been over land as the airspace is now controlled by the Taliban.

In a story dripping with emotion, O’Shea told the plight of one American named Asad, who had relocated from Afghanistan to America. “Asad only returned to Kabul to gather his family,” O’Shea said. “His wife and boys all had blue passports. But Asad refused to leave the rest of his family behind, including his parents, his brothers and sisters and their families.

“The options at the (Kabul) airport were closing with the gates. He had mere hours to make the call. Two days into our constant communications, I texted him the following: ‘Asad, you need to make a decision about which members of your family you can save at this point.’ He replied without hesitation, ‘Dan, my father raised me to be the man I am today. I am not leaving him, my mother, my brother, my sisters or their children. Would you?’ His answer floored me. My response was quick. ‘I would stay, too.’ He wrote, ‘Then you are my brother. If we die, we die together as a family.’”

Moments after O’Shea finished his remarks and the crowd quietly disbursed, one of the volunteers walked over and introduced himself to me. The moist glimmer in his eyes had yet to disappear. “That was something, wasn’t it?” he said. After a moment of chitchat, he said, “I was there in the last days of Saigon. I was part of the final flights out. When I got back, I couldn’t talk about it. My father, who was in Papua New Guinea during World War II, told me that it was okay not to talk about it but not to dwell on it too much, either. It took about five years before I could finally tell anybody about it.”

Then the volunteer turned back to the flag, still slow dancing with the cloudless Florida sky. “That was really something,” he said. 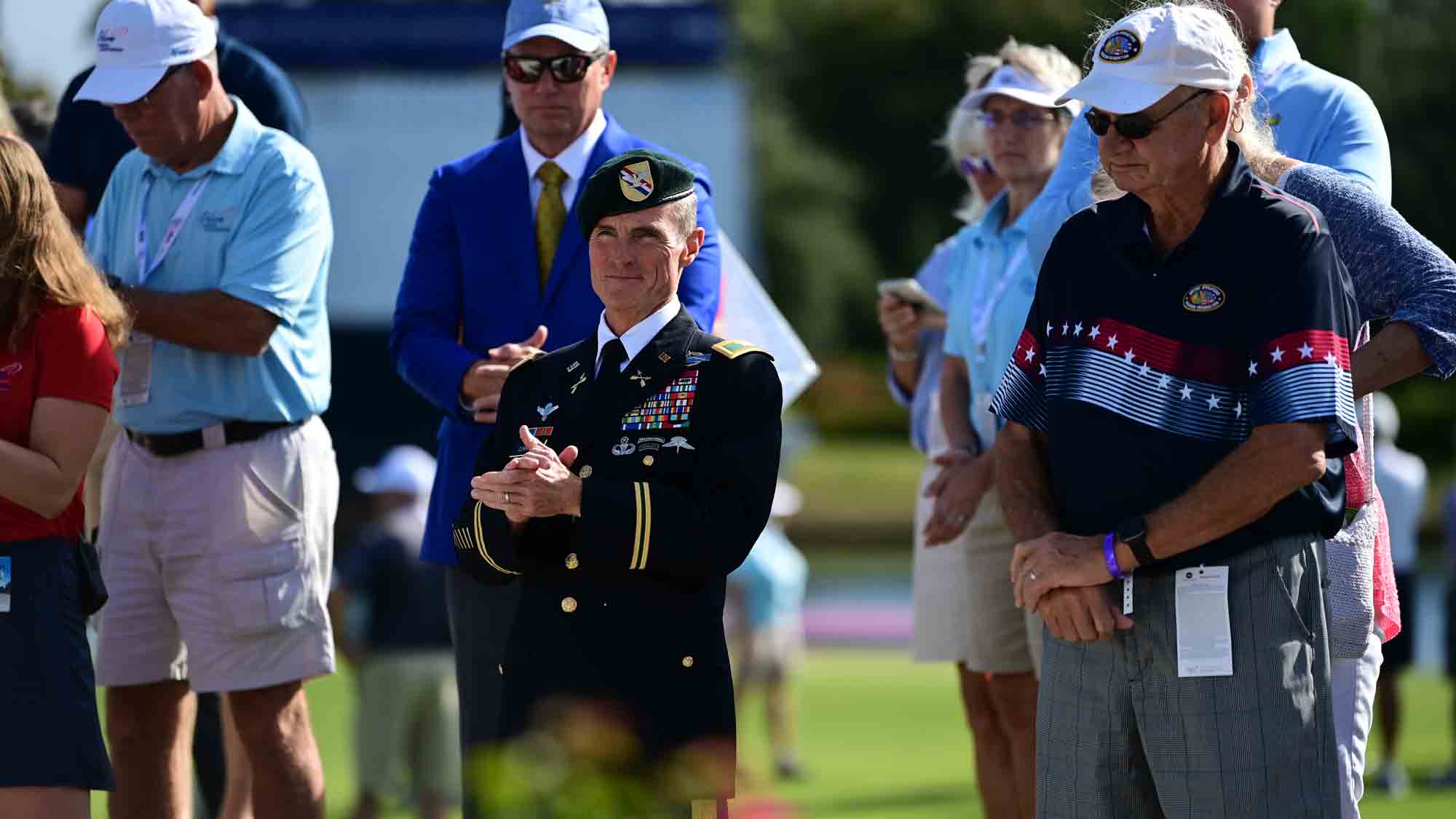