Written By: Zach Sepanik @zachsepanik
Zach spent two seasons as the communications manager on the Symetra Tour before becoming a LPGA Tour media official in November of 2019. Prior to the LPGA, Zach was a sports anchor and reporter for two years with the NBC affiliate in Grand Rapids, Michigan.
﻿
0Share on Facebook
0

Olivia Mehaffey has arrived in Rancho Mirage, Calif. for Stage I of the LPGA Qualifying Tournament. It’s a week that feels like the end of a two-lane highway—worn over the years by practice and preparation, with the option to exit at various points along the journey—crossing the threshold to the one-way path of a lifelong dream as a professional golfer on the LPGA Tour.

While she turned pro in early May, the Arizona State University alumna is now entering the starting gate to the next phase of her career.

“This week is the one I've been preparing and getting ready for all my life,” said Mehaffey. “Obviously, [the ISPS Handa World Invitational presented by Modest! Golf in] Northern Ireland [on the LPGA] was a lot of pressure having family and friends there. Then pro debut [on the Symetra Tour at the Mission Inn Resort & Club Championship], that is three tense moments. Excited for this week and a new challenge.”

Those and future experiences were made possible by Mehaffey’s deep desire, ignited five years ago at the AIG Women’s Open, which happens to be the final major of the 2021 season contested this week at Carnoustie Golf Links.

“When I was 18, I played the 2016 [AIG] Women’s Open at Woburn, my first major and first professional event,” Mehaffey said. “Being around the best players and really getting a taste for what it's like playing in front of crowds, walking the fairways and seeing Michelle Wie, I came away from that week and it has been the same every single time since. I want it that bit more. And you realize the steps you have to take to get where you want to be. Those weeks meant so much because every time I teed off as an amateur with the pros, I came away thinking, ‘I just want to be out here so bad.’

“It's crazy, this is my first time going to Q-School. I wanted to go three years ago but I fell and broke my hand. Then, obviously, the coronavirus last year. It's setting up for next year, so it is an important week.”

One person that the Belfast, Northern Ireland native has looked up to over the years is fellow Sun Devils alumna and two-time LPGA Tour champion Carlota Ciganda. In 2015, the two met at St. Leon-Rot Golf Club in Germany. Mehaffey was 17 and competing for Team Europe in the Junior Solheim Cup, while the Spaniard was gearing up for her second stint on the European Solheim Cup Team.

Six years later, Mehaffey and Ciganda are good friends. So much so, Mehaffey says, that, “I just text her and she is one of the first people I go to.” But the initial introductions were a little out of the norm from Mehaffey’s typical extroverted personality.

“I remember being on the Junior Solheim Cup team, just in my element. We were inside the ropes and I was following her the whole time,” said Mehaffey, who lives in Tempe, just down the road from Ciganda in Scottsdale. “We went in the team room and met everyone on the team. When I finally got to meet her, I was too shy and so starstruck to go over and say hello. When you meet somebody that you watch on TV and aspire to be like when you are older, it’s kind of crazy to meet them.

“Now she is someone who helps me so much. Same coach [in Jorge Parada] and practice a lot together in Arizona. And I'm always at her house for dinner. It's funny how it all works out. I was very shy and I'm not normally shy.”

A good example of “not normally shy” occurred in November 2018, when Mehaffey came face-to-face with 2021 PGA Championship winner Phil Mickelson, a 45-time PGA TOUR champion, at the unveiling of ASU’s state-of-the-art practice facility, Thunderbirds Golf Complex at Papago Golf Course. The 12-acre home of the Sun Devils was designed by Mickelson.

“When they opened the facility, Phil Mickelson came by and just hanging out with the teams, everyone was talking with him. I asked him if he wanted to have a closest to the pin. We went down to the range, asked someone the yardage and he goes, ‘Ok, one ball closest to,’” Mehaffey said. “Phil hit first, straight at the pin then says, ‘The number is wrong. I hit that perfect.’ The number was wrong, but we were smack talking and he let me have two. He spent the whole day with us and it was a lot of fun.

“I'm not normally shy and I don't know what was wrong with me the first several times that I met Carlota.”

Back in Northern Ireland, Mehaffey practices at Royal County Down and Tandragee Golf Club. As for the States, she hasn’t “really committed to anywhere yet, so still practicing at Papago.”

There’s no doubt the experiences on the course have prepared her for the LPGA Qualifying Tournament. Just look at the tie for 17th performance earlier this month at Galgorm Golf Club, her first LPGA start as a professional.

It’s the experiences outside the ropes, like those with Ciganda and Mickelson, that have contributed just as much to what should be a long and fruitful career on the LPGA Tour. Each opportunity has also shaped her voice as a role model to the next generation of girls in Ireland and around the world. 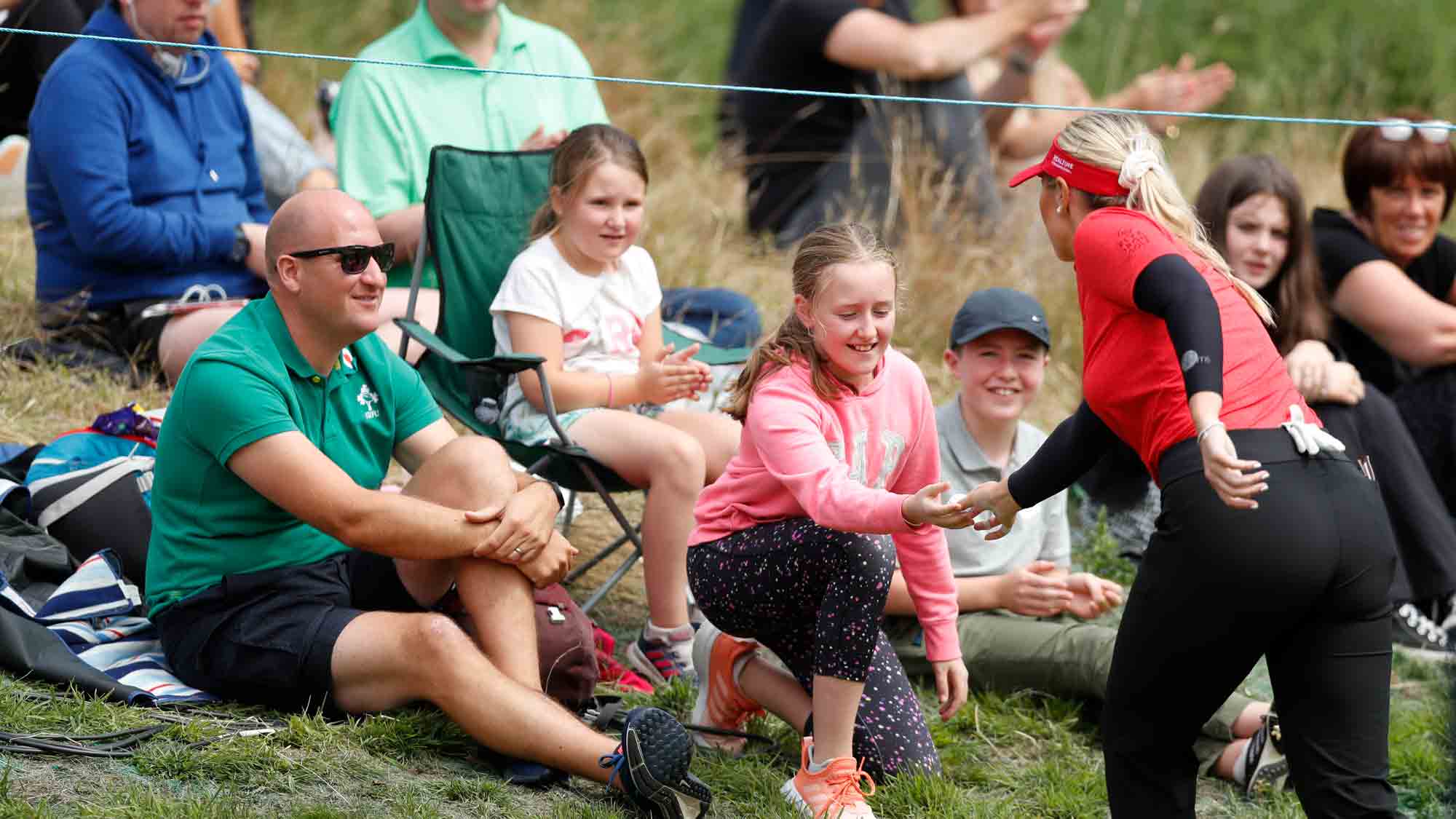 “It's so important to me [to inspire the next generation] and it's something since I was young that was important. I grew up playing with the guys and it was all about Rory [McIlroy], Shane [Lowry], Graeme McDowell, Darren Clarke, Padraig Harrington, Paul McGinley. It was just dominated by males. Now, times are changing with Leona [Maguire] out there and Stephanie [Meadow]. When I was growing up, I didn't have any females in Ireland that I was looking up to but just the guys,” said Mehaffey, a two-time Augusta National Women’s Amateur participant. “I'm very fortunate at both my golf clubs where I get to spend a lot of time with the juniors and help them. It means so much to me and I probably have a better time than they have, I'm in my element just enjoying it so much.

“Golf has given me so many amazing experiences. I would love some of the girls to experience what I have experienced because I know my life would not have been the same without golf. The places I have traveled, the friends I made are all because of golf. If they can enjoy it, look up to me and think, ‘Gosh, that is so cool she plays for Ireland,’ or even, ‘She played at Augusta, that’s amazing and she went to college in America,’ and I can help inspire them, it would mean a lot.”