It’s hard to find a silver lining when you’re in the middle of the storm. It’s even harder to convince yourself that things will all work out, that the greatest things in your life are ahead of you when you’re being treated in shocking and embarrassing ways - having your life exposed in the national media and your dreams shattered through the malice of others.

Katie Rudolph, a Class A LPGA Professional since 2018, vaulted onto the national stage during the U.S. Women’s Open when her star student, 17-year-old high school junior Megha Ganne, played her way into the final group on Sunday and finished as low amateur. NBC cameras captured Rudolph and Ganne working together, smiling and joking and drinking in every moment. It didn’t go unnoticed that Rudolph was the only female coach on the range late in the weekend.

What the cameras didn’t catch was Rudolph’s journey, or the tears of joy that her wife, Jenn Rudolph, shed when Ganne rolled in a putt on the final green to mark her place as the charismatic star of 2021.

Neither Katie nor Jenn could have imagined that life would lead them here.

That’s because a decade ago, Katie was in the news for altogether different reasons. In 2010, the Wake Forest graduate from the small town of Little Falls, Minn. had been recruited to come home and coach the University of Minnesota Gophers’ women’s golf team. She was Katie Brenny at the time. She told LPGA.com, “To be a Gopher if you’re from Minnesota, that’s as good as it gets.”

But she also had questions. “I remember thinking, ‘I wonder if they care that I’m gay?’ So, I opened up the packet that they gave to all new hires and the first thing in there was a pamphlet on how inclusive they are and how much they care about gay rights. I figured that I didn’t need to come out and tell them.

“Man, I read the room wrong on that one.”

Within days of being hired, Katie’s responsibilities were changed. She was told that she couldn’t recruit or coach or travel with the team. Within weeks, she was relegated to selling football tickets. She was told to either comply with her new role or resign. She chose the latter. Her tenure at the university was 57 days. Then, she sued.

“I left the U. of M. with my tail between my legs because I was a Minnesota girl coming home,” Katie said. “To have that happen in my home state was really embarrassing for me and my family.

“Then, when I decided to pursue a lawsuit against them, my mom was like, ‘Do you think this will be in the paper?’ I told her that even if it was, it would be a small paragraph on page six. The next day it was front page of the ‘Minneapolis Star-Tribune’ with this blasting headline.”

That was the least of it. Press coverage went around the globe. Katie’s lawsuit was a landmark case. Jenn, who describes herself as a recovering lawyer, said, “At the time Katie didn’t know why they were treating her so badly. But as they got into the evidence, it was a lawyer’s paradise of emails, texts and things like that.”

“I made a pact with myself that I was going to come out on top,” Katie said. “Unfortunately, it went on for four years before we went to trial. When we finally went to trial in 2014, it was a nine-day trial and I think I lost 15 pounds. Then it was 5 months before we got a decision. But when we did, it was a landslide victory in our favor.”

During those years, Katie said she was toxic in the golf industry. Employers would interview her, tell her how much they loved her, and then explain that they couldn’t hire her while her suit was pending. She moved back to North Carolina and volunteered at the First Tee of Charlotte. But when she arrived the executive director hired her on the spot as a program director.

Within a year, that same director called the head of the First Tee of Metropolitan New York and said, “I’m sending a star your way. Figure out what to do with her.”

That move made all the difference.

In October of 2012, Katie was invited by an older friend to play the Van Cortlandt Golf Course, supposedly America’s oldest muni. While the course wasn’t memorable, the third member of the group turned out to be quite the find.

“I assumed it would be another 70-something-year-old who would be joining us,” Katie said. “And then Jenn rolled in and I was like, ‘hmm.’”

By then, Katie had another silver lining come into her life. 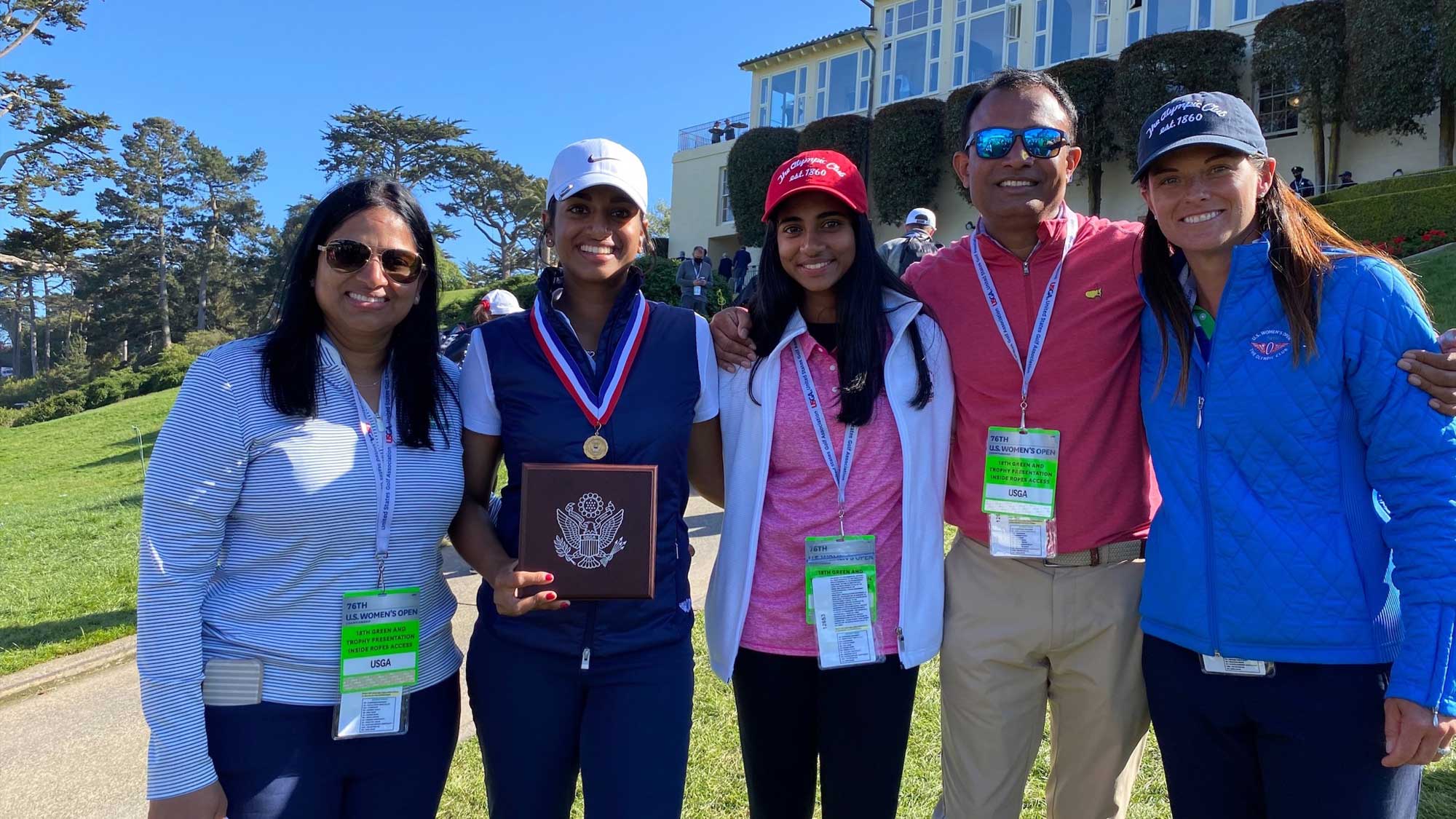 “Not long after coming to New York, I gave a speech at an LPGA*USGA Girls Golf program in New Jersey. The talk was about what it’s like being a girl who plays golf and what playing the game well can mean for your future. I had no idea Megha was in the crowd.

“Then I came back a few weeks later and I saw this little girl hitting balls at the range by herself. And she was striping it. I said, ‘Hey, where’s your dad?’ He was inside. So, I talked to Hari and said, ‘What’s the story out there?’ He said she liked golf and didn’t have a coach.

“We’ve been together ever since.”

Then, this past May, the devastation from the Minnesota debacle came full circle. Katie Rudolph was hired as both the head men’s and women’s golf coach at New York University.

“NYU came out of nowhere,” she said. “But I really wanted to be in that athletic space with like-minded people. We’re D-III, so we have no scholarships and, right now, no golf course. But we have kids who can play and who do it for the right reasons. They love the school and they love the game. So, don’t you worry, I’ll have a place to play by September.”

And she’ll bring a new attitude and perspective, one that she wouldn’t have found without the trial and the tribulations that came before.

“When I was at Wake Forest, Mr. (Arnold) Palmer would come play with us. He was a blast. When he got over the ball, it was all work. But in between (shots) he was shaking hands and kissing babies. He was having the best time. You can be in the zone with a smile on your face.

“That’s the lesson I want to teach to everyone.”