The inaugural Bank of Hope LPGA Match-Play Hosted by Shadow Creek is down to four players, vying for the LPGA Tour’s first match-play title since 2017. American Ally Ewing will take on Thailand’s Ariya Jutanugarn in Sunday’s first semifinal match, while China’s Shanshan Feng, who won her quarterfinal match with a 50-foot birdie on the first playoff hole, will face off with Germany’s Sophia Popov. 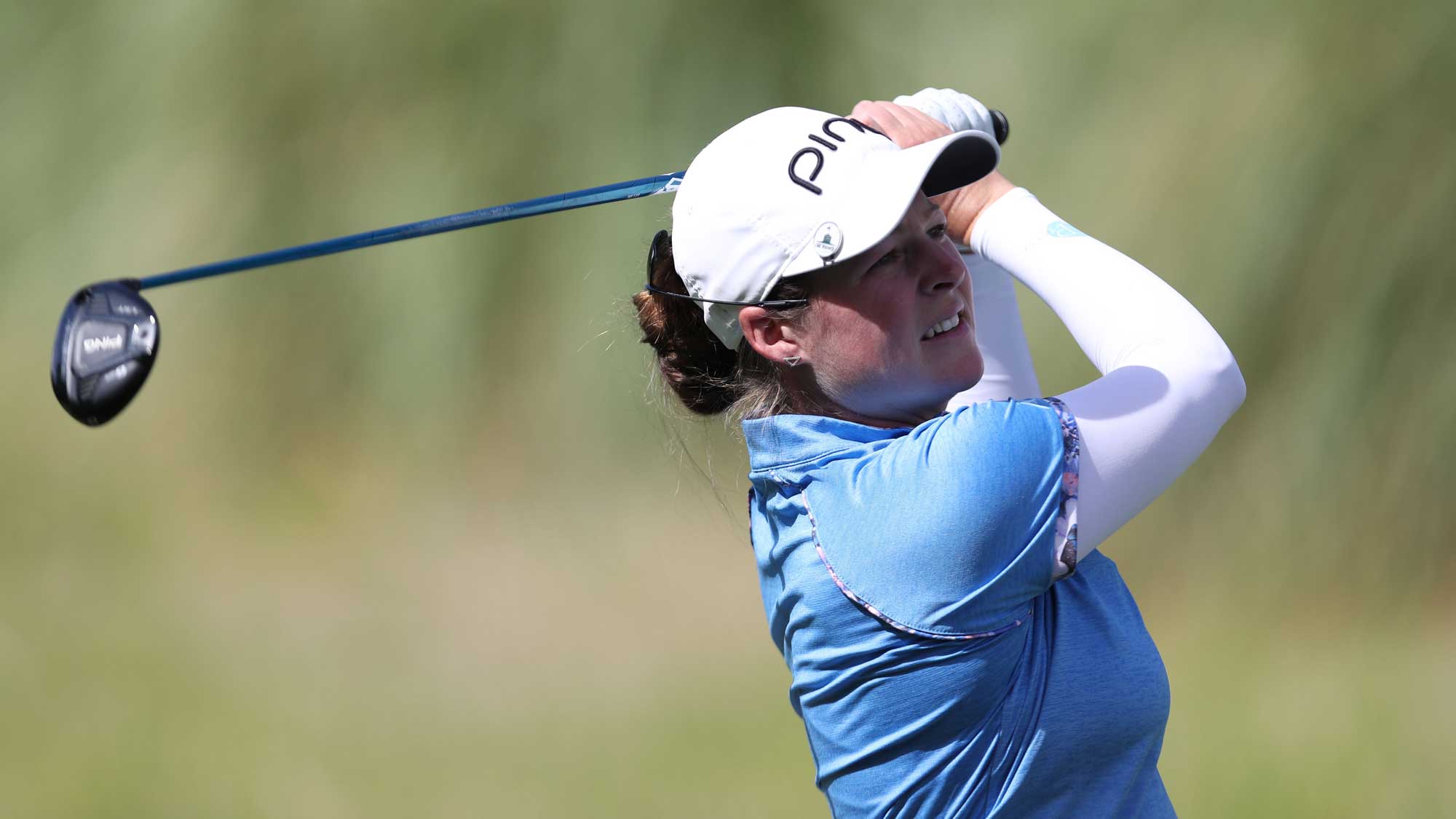 Ewing’s quarterfinal 1-up victory over Danielle Kang was a back-and-forth affair from start to finish. Kang had not trailed at any point in the competition and with a 2-up lead through three holes, it looked like the Shadow Creek member might roll again to victory. But Ewing, her 2019 Team USA Solheim Cup teammate, made birdie on No. 3 and holed out from a bunker for eagle at No. 4 to square the match.

“That kind of settled me down,” said Ewing of that moment on No. 4. “Obviously from there on out it was a lot of trading back and forth of birdies.”

Kang took 1-up advantages twice more during the match, but Ewing never let her get too far ahead. Ewing’s birdie at No. 14 gave her the lead for the first time, also marking the first time all week that Kang had trailed. After Kang birdied the par-3 17th to again tie the match, Ewing’s chip from the front rough at 18 rolled to within five feet for the birdie that earned her a spot in the final four.

“I knew if I gave Danielle any open door, she would capitalize as she did all day,” said Ewing, who needed 19 holes to beat Jenny Coleman in the morning round. “Thankfully I rolled that putt in and sealed it.”

The match provided arguably two of the finest performances of the week. Ewing carded seven birdies and one eagle in the match (with match-play concessions) while Kang had six birdies of her own and went bogey-free. In a de-facto host role this week as an MGM Ambassador and Shadow Creek member, Kang was the odds-on favorite to take the tournament title. It’s a tough loss to swallow, but Kang pointed to the duo’s strong play as a reason to be proud of how her week ended.

“I'm really excited about where my golf game is headed. I definitely took a little detour for the last few months, and about a week ago, I felt like everything is starting to come together,” said Kang. “It showed this week. I played well today and Ally played really well, so it wasn't like she gave it away or I gave it away. She won the match. I hope I get to go head on head with her again.” 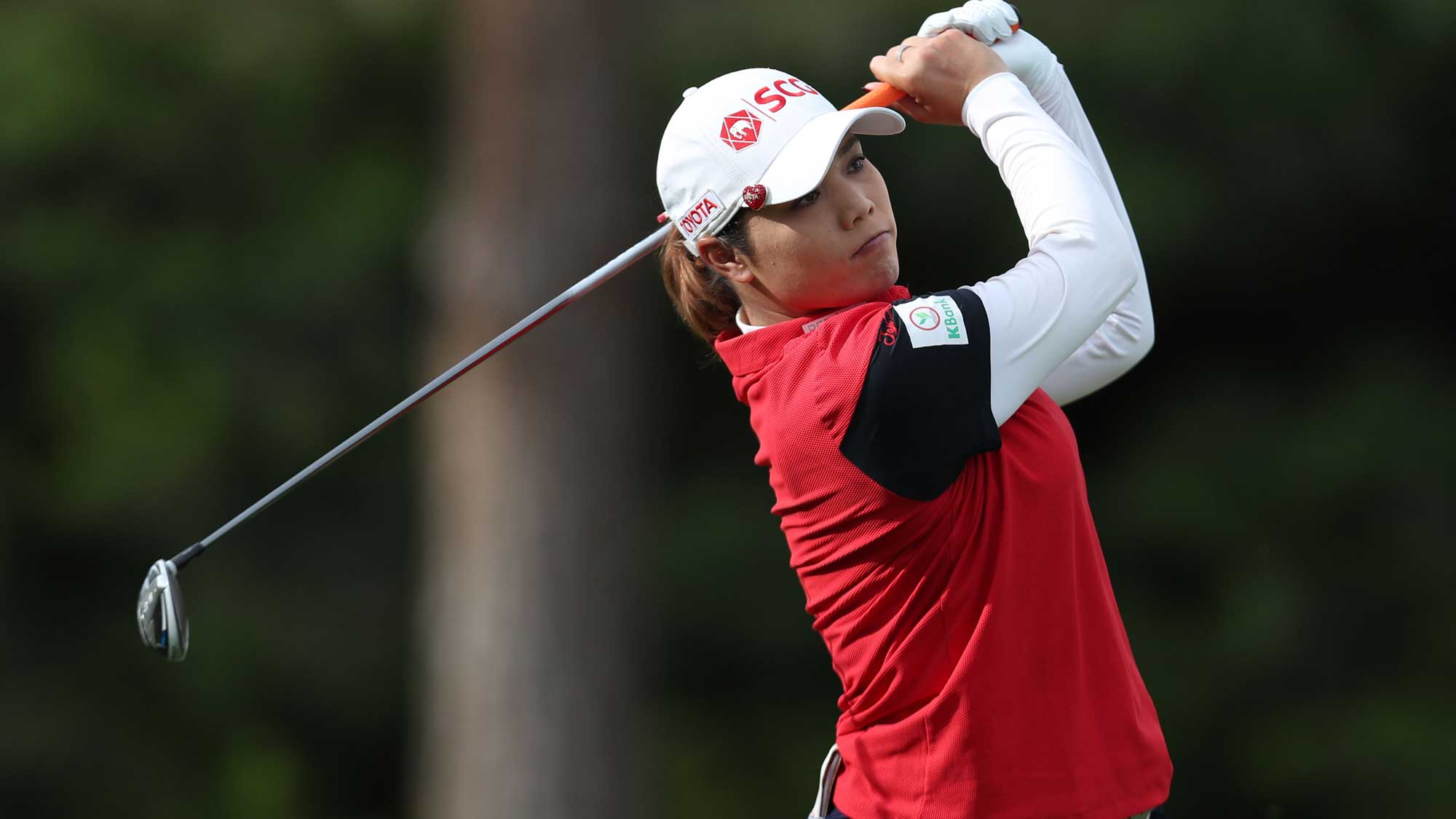 Ariya Jutanugarn struggled with the heat in Saturday afternoon’s quarterfinal round, but certainly not with her game in a 5-and-4 win over Minjee Lee. Jutanugarn, the runner-up at the 2017 Lorena Ochoa Match Play, won the first hole with a birdie and cruised home from there. She reeled off four consecutive wins at holes 7-10 to go 5 up through 10 holes, an insurmountable lead.

Visibly drained after two rounds in the difficult weather conditions, Jutanugarn laughed when told she made the win look easy.

“It's not easy at all, and especially the course and playing against Minjee Lee. She is one of the best players on Tour,” said Jutanugarn, who reached the quarterfinals with a 4-and-3 win over Anna Nordqvist in the Round of 16. “It's match play. Sometimes you have a really good day and you lost the match, or sometimes you play okay and you win the match. It's match play, so we never know.” 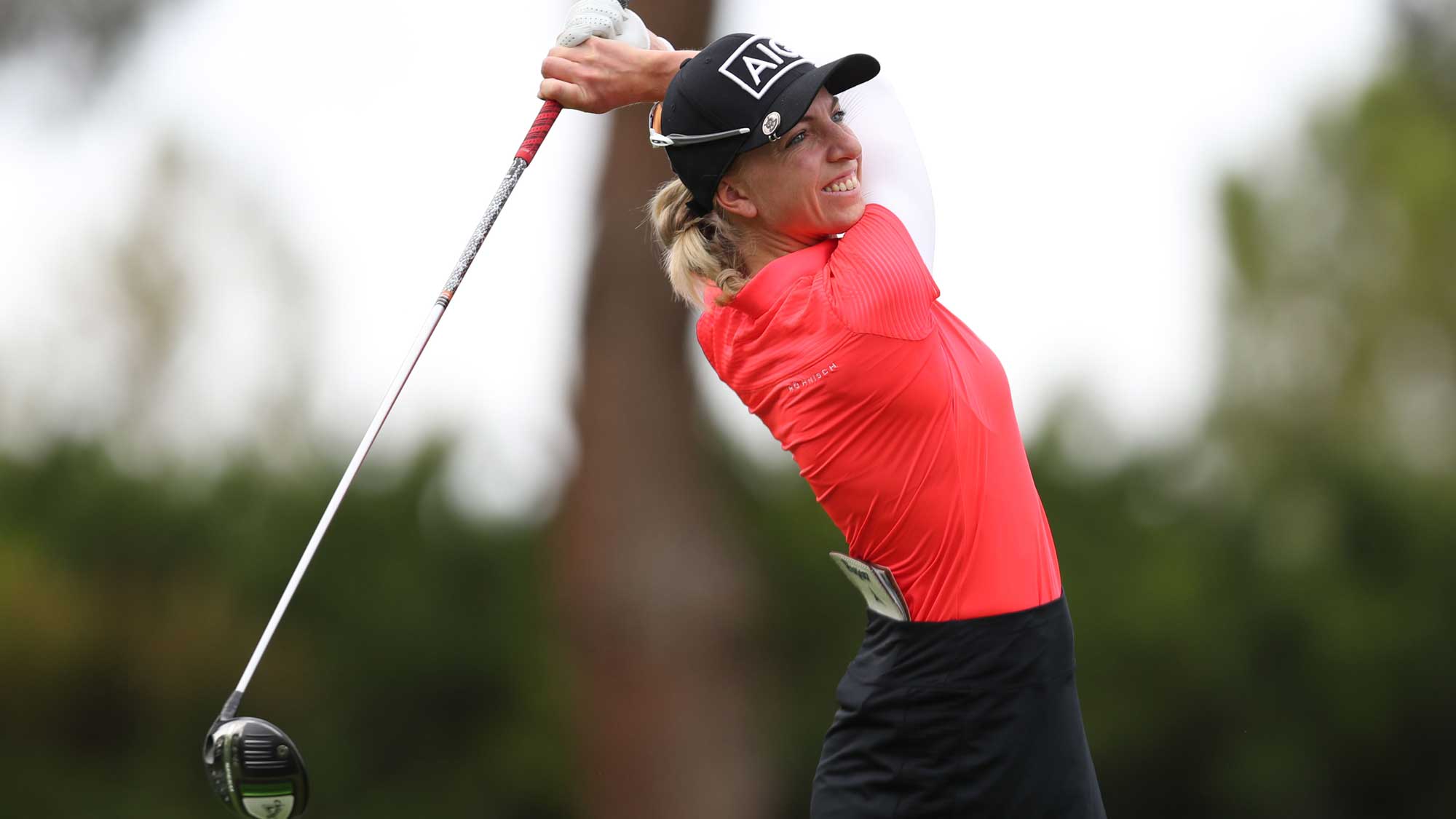 Sophia Popov is on to the semifinals at the Bank of Hope LPGA Match-Play Hosted by Shadow Creek on the heels of her “lucky charms.”

The 2020 AIG Women’s Open darling never trailed in her quarterfinal match against fellow major champion Patty Tavatanakit, only surrendering one hole en route to a 3-and-2 victory.

“I’m very close to my family. My brother [Alex] is here with his wife and my three nieces, two of them are old enough to understand what’s going on at 3 [Liviana] and 5 [Annalise],” said Popov. “They’re pretty much what I play for. They’re everything to me.

“It’s the first time they came and watched me, so it has been pretty nice. They’re my lucky charms. I know they really want to go to the pool now, but I really want them with me,” Popov added, following her Round of 16 win over Inbee Park this morning.

This afternoon, Popov won No. 2 with a birdie, and secured par to win Nos. 9 and 10 to open her widest lead at 3 up. It was smooth sailing from there.

“The afternoon was stress-free, for the most part. Patty was playing really solid. I was playing really well. I didn't leave any openings, didn't make any bogeys until No. 15,” Popov said. “I was putting for birdie almost all day, and I could have made more. I think for me it was very stress-free.

“Definitely happy that I didn't have to go through the whole 18 and more like the first round again. I think maybe also that quick transition [between matches] helped. You almost just continue playing and I think that might have helped a little bit.” 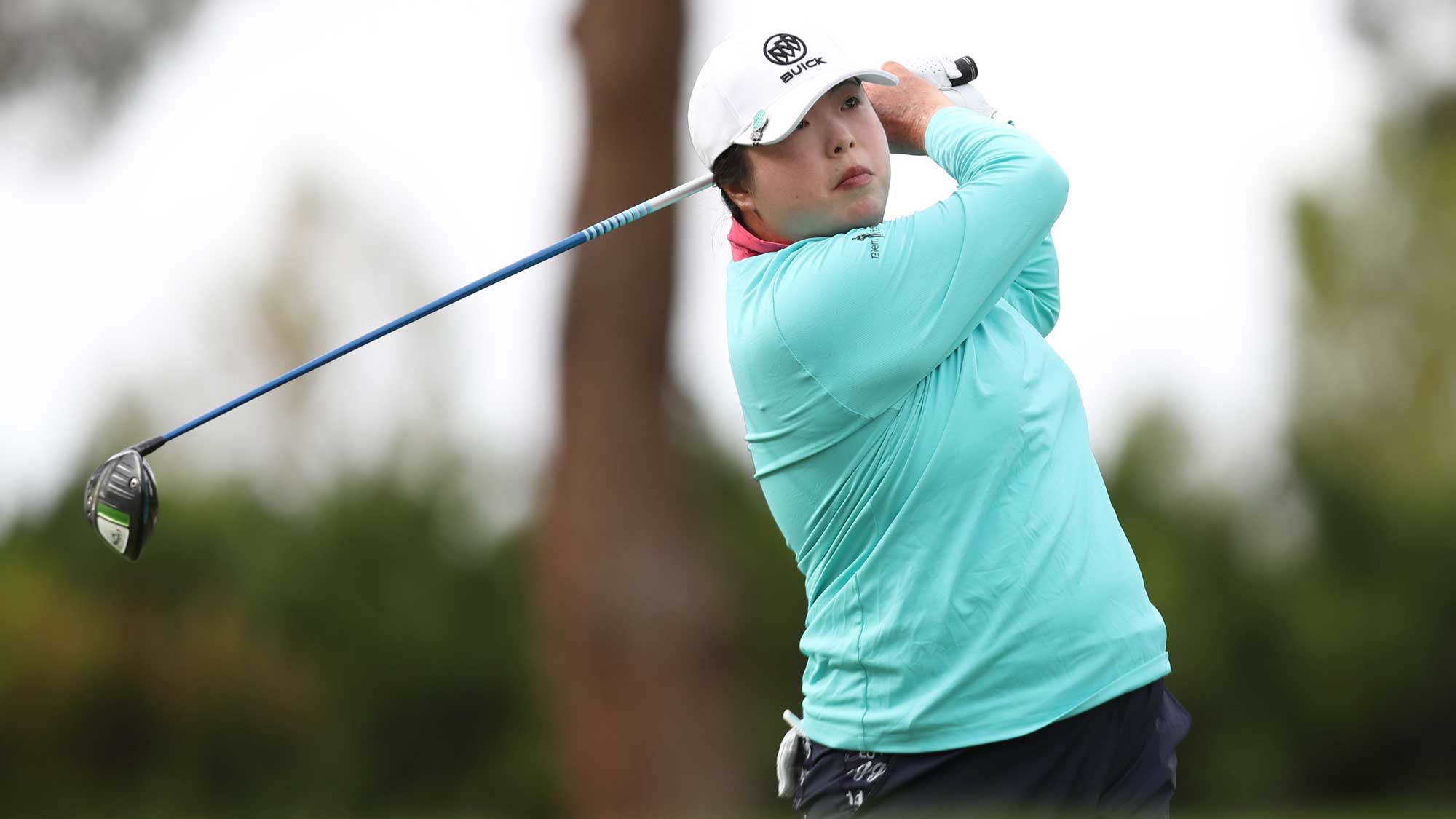 Forty-one holes in a day is a lot of golf for anyone. Shanshan Feng now knows that first hand.

It was especially gratifying for the 10-time LPGA champion to advance to the Bank of Hope LPGA Match-Play Hosted by Shadow Creek semifinals after such an exhausting Saturday. Feng ended her quarterfinals match against Eun-Hee Ji with a 50-foot birdie putt on No. 10, the first hole of a sudden-death playoff after the two were tied following 18 holes.

“I’m very happy that the putt finally fell in the hole on that 10th hole there,” said Feng. “To be honest, there were quite a few times when I was on the course, I was like, ‘You know what, you have tried your best already. Yeah, maybe you don't have to give it your 100%. If you make any mistakes, it's acceptable.

“But at the same time I said to myself, ‘Hey, if you win today, you just need to beat two more person to win the tournament.’ My last time to have a chance to win a tournament was 2019, my last victory. So I thought about this and I was like, ‘I'm getting close. Don't give up and fight until the end.’”

Feng made the turn with a 1-up lead and added to it thanks to a birdie on No. 11. But it was Ji collecting wins on Nos. 12 and 15 to ultimately force extra holes.

“Both of us played really well. The first three rounds, I’d say that I actually won many holes with par, but actually today playing with Eun-Hee, I had to make birdies to try to win the holes,” Feng said. “I really respect what Eun-Hee has done for her career, and I'm happy that I got Brittany [in the morning match] and Eun-Hee. They were both very, very nice and very good players. They really inspired me.”