DAYTONA BEACH, Fla., April 26, 2021 – The LPGA Foundation announced today the five high school graduates selected to receive the 2021 Marilynn Smith Scholarship, as well as two graduates awarded the Phyllis G. Meekins Scholarship and one awarded the Dinah Shore Scholarship. These eight students went above and beyond with their outstanding academic excellence and leadership skills and were active in their communities, while also fulfilling specific requirements for each scholarship award.

The Marilynn Smith Scholarship, named in honor of one of the LPGA’s 13 Founders, is awarded to high school seniors who plan to play golf at an accredited college or university in the United States. Each of the 2021 recipients will receive a $5,000 scholarship. Since Marilynn Smith established her namesake scholarship program in 1999, the LPGA Foundation has awarded more than $1 million to scholarship recipients.

The Dinah Shore Scholarship was established in 1994, the year that Hollywood personality and ANA Inspiration founder Dinah Shore was inducted to the LPGA Hall of Fame as an honorary member. The scholarship is given to a female high school senior whose plan it is to attend college but not play golf at the collegiate level. The recipient of this award will also receive a $5,000 scholarship.

The Phyllis G. Meekins Scholarship, established in 2006, celebrates the achievements of a female high school senior who identifies herself as someone from a minority background whose dream it is to pursue a full-time course of study while playing golf at an accredited college or university in the United States. The two recipients of this award will each receive a $5,000 scholarship. 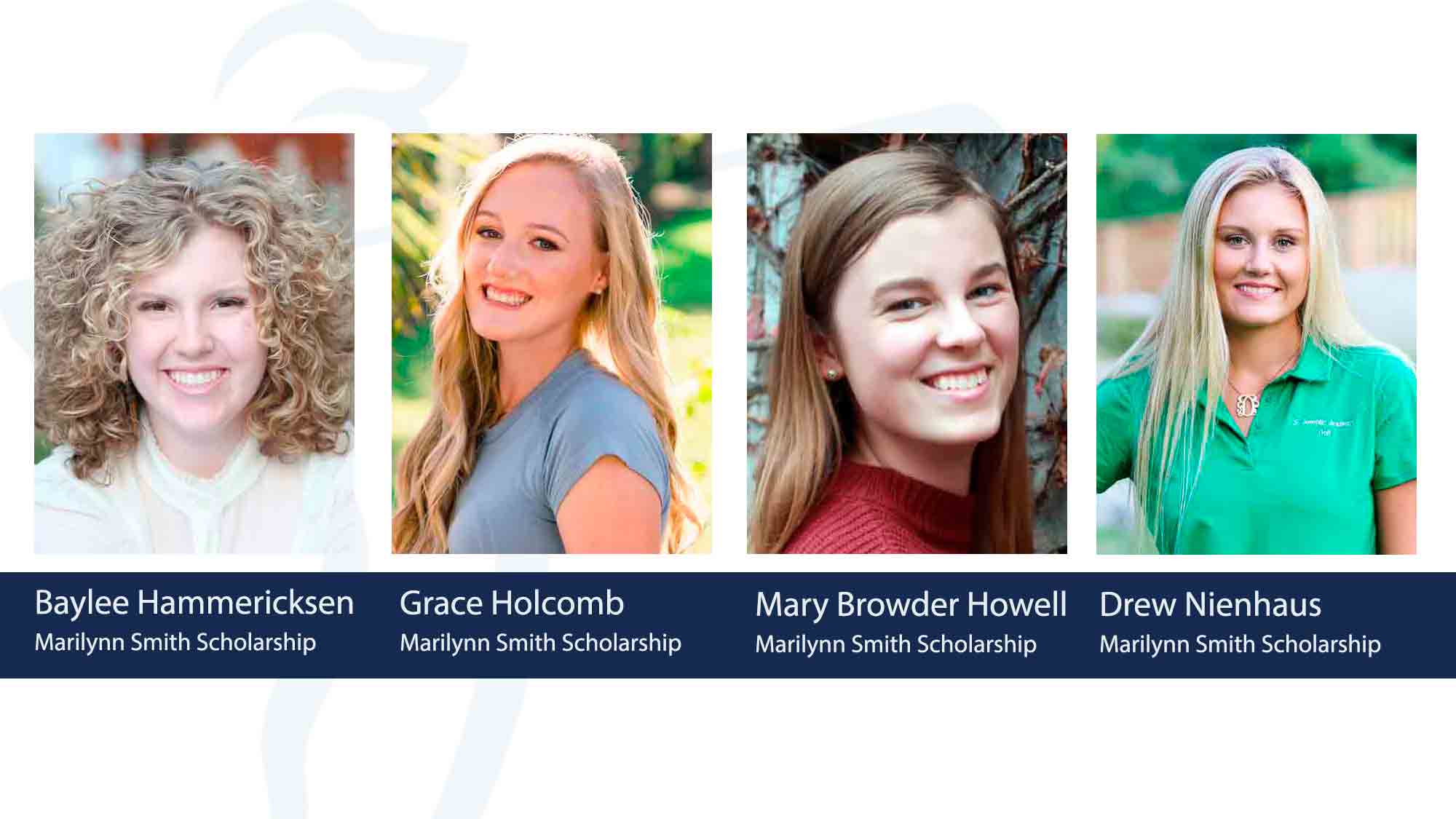 Baylee Hammericksen is graduating from St. Mary’s School in Medford, Ore., where she was Team MVP and Team Captain for her volleyball and golf teams, respectively. In her sophomore year, she broke the state record for the lowest score recorded in golf. Outside of sports, she has volunteered as a math tutor, served on her school’s Student Council, and was lead cellist in the school orchestra, all while maintaining a 4.0+ GPA.

In the fall, Hammericksen will play golf for the University of Oregon while working toward a degree in Global Studies, with a minor or double major in Chinese. She hopes to pursue a career in the golf industry either in major tournament outreach or golf instruction, teaching the next generation of players and increasing access to the game that she loves.

Grace Holcomb is graduating from E.A. Laney High School in Wilmington, N.C., where she was Team Captain for golf and helped lead the team to their fifth straight MEC conference championship. A member of the Peggy Kirk Bell Golf Tour, Holcomb volunteers her time at her local First Tee and LPGA*USGA Girls Golf program. Outside of golf, Holcomb is a dancer, gymnast, All-State violinist, member of the National Honor Society, and fundraiser for St. Jude and The Girls Project through FWB Charity Events.

Holcomb will play golf for the University of North Carolina at Greensboro in the fall while working toward a degree in Marketing, with a concentration in social media.

Mary Browder Howell is graduating from Murray High School in Murray, Ky., where she was co-captain of the varsity golf team for three years and maintained a 4.0+ GPA all four years. Her leadership roles included Student Body President, Treasurer of Fundraising for the Future Business Leaders of America, and Founder of the Finer Things Club. Diagnosed with cancer in the fifth grade, Howell found solace in golf and serving her community, most notably as a national Patient Representative for St. Jude Children’s Research Hospital.

In the fall, Howell will attend Sewanee: The University of the South and plans to major in business, with minors in Spanish and religious studies.

Drew Nienhaus is graduating from St. Joseph’s Academy in St. Louis, Mo., where she was a member of the National Honor Society, National Math Honor Society (Mu Alpha Theta), St. Joseph’s Academy Choir and Club Volleyball, and was a Student Ambassador and Freshman Shadow guide. A four-year member of the Varsity Golf Team and four-time Missouri State Large Class State Champion, she was named Team Captain her senior year.

Nienhaus will attend the Smeal College of Business at Penn State University in the fall, where she intends to major in Corporate Innovation and Entrepreneurship while playing Division I golf. After graduation, she hopes to be involved in growing the game of golf through new business ventures.

Lakyn Parker is graduating from John Marshall High School in Glen Dale, W.Va., where she participated in the Youth Leadership Association, Chamber Orchestra, National Honor Society, tennis and golf teams, and was a four-year member of the Distinguished Honor Roll. After picking up a golf club her sophomore year, she helped build the first girls high school golf team in West Virginia and became the first girl in the state to earn a varsity letter with both the girls and boys golf teams.

In the fall, Parker will play golf for Wheeling University and major in Elementary Education with a minor in mathematics. She plans to stay in West Virginia so she can give back to the state she loves while continuing to give back to her community. 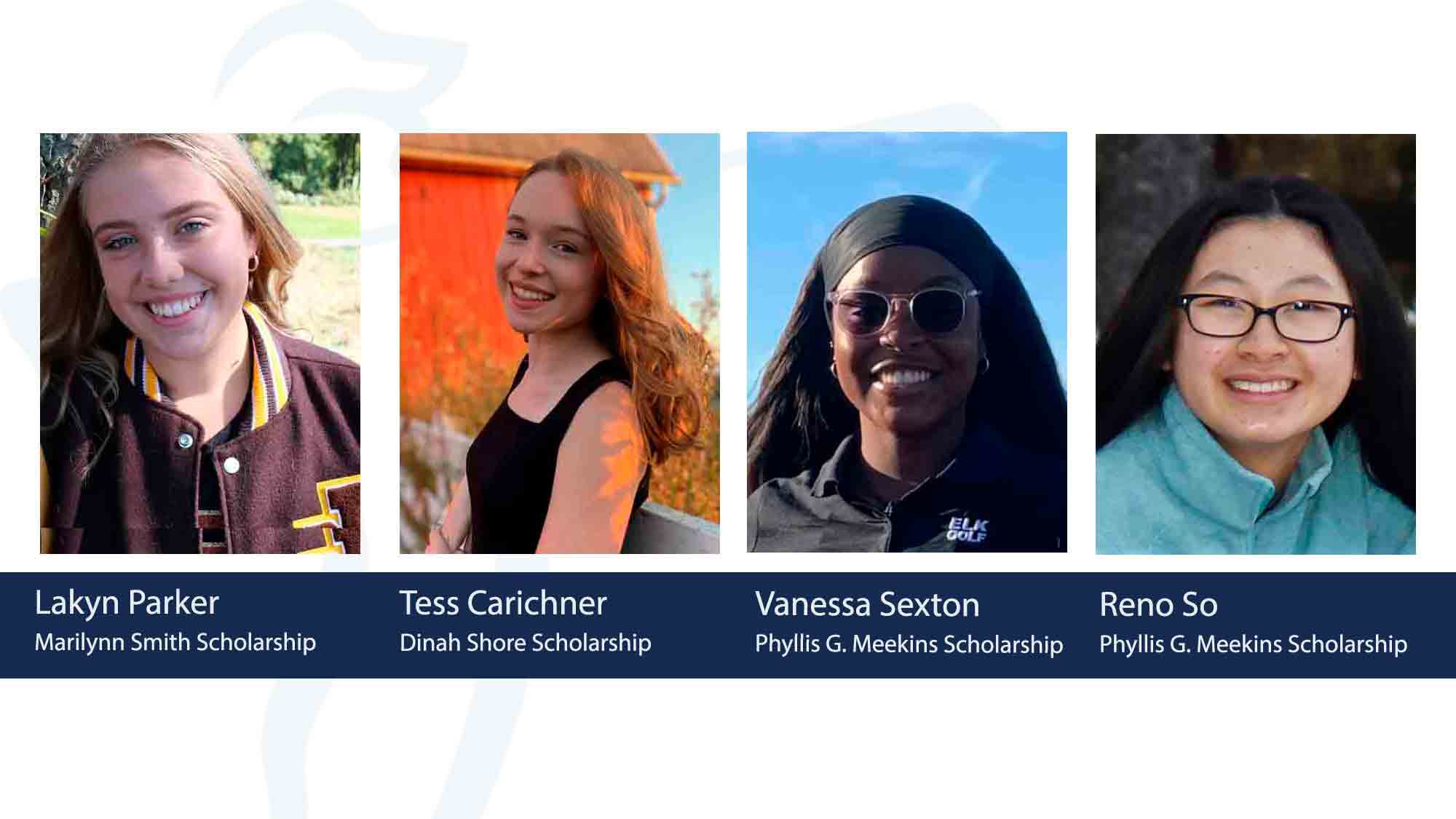 Tess Carichner is graduating from Saline High School in Saline, Mich., where she was captain of the Varsity Cross Country and Track teams, solo vocalist and pianist with the jazz band, and Co-Founder and President of the Minding Your Mind Matters high school mental health awareness club. Dedicated to serving her community, Carichner earned the Prudential Spirit of Community volunteer service award. She is also an LPGA*USGA Girls Golf and LPGA Leadership Academy alumna, as well as a two-time Goldie Bateson Scholarship Award Winner.

Carichner will attend the University of Michigan School of Nursing in the fall, with plans to receive a Doctorate in Nursing Practice. She is passionate about social justice, gender-related health disparities, and mental health, and hopes to use health to promote equity on the grounds of race, gender, age and income.

Vanessa Sexton is graduating from Burleson High School in Burleson, Texas, where she was Captain of Varsity Golf Team, member of National Honor Society, clarinet player in the Marching and Symphonic Bands, and Librarian Leader for the band. She also served as President for the Mayor’s Youth Council.

In the fall, Sexton will play golf for Kansas Wesleyan University and major in Social Work. Her biggest dreams are to become a professional golfer and a licensed social worker. Through her mother’s teachings, she wants to be an advocate for all people, regardless of race, ethnicity, gender or religion.

Reno So is graduating from Worthington Christian High School in Worthington, Ohio, where she was President of the Math Club, Vice President of the Bio Club, a violinist in the orchestra and a member of the National Honor Society. On the golf course, she was named Team Captain and earned Player of the Year and First Team honors for the mid-state league four years in a row. She also volunteered at Golf Camp, helping girls overcome barriers placed on young female golfers and truly enjoy the sport.

So will attend the University of Delaware in the fall to major in Chemical Engineering, with aspirations to conduct research on tissue engineering and regenerative medicine, specifically on bio-artificial organs. Her career goals are to help those who are waiting for organ transplants to receive an organ grown from their existing cells.