Sweden’s Helen Alfredsson has two senior major titles to her credit, the 2019 U.S. Senior Women’s Open and the 2019 Senior LPGA Championship, and is looking to add a third title to her resume this weekend. The 57-year-old leads the 2022 edition of the Senior Women’s Open at NCR Country Club after carding a pair of 3-under 70s on days one and two in Kettering, Ohio. Although the scores were the same, Alfie was much more pleased with her second-round effort and looks ahead to Saturday and Sunday knowing nervousness is inevitable, especially considering she hasn’t had any competitive reps since this event last year.

“I know the nerves are going to come,” said Alfredsson, whose second-round saw her make four birdies and one bogey. “It's not something you ask for. It's just there because you care. That's why anytime you care about something, you're going to get nervous. It's great to have Janice (Moodie) there because obviously she's been around and she played. But I'm just trying to stay calm, as calm as I will ever be.”

Alfredsson held the lead or co-lead through 36 holes 10 times during her LPGA Tour career and went on to win twice, once at the 1993 Chevron Championship for her first and only major title and again at the 1998 Welch’s/Circle K Championship where she beat Liselotte Neumann and Dana Dormann by one shot. But instead of reflecting on bygones, Alfie remains focused on keeping the ball in play, the main key to success on the South Course, and hopes that her ability to shotmake will make up for her lack of time spent in contention.

“I have an advantage that I'm fairly long still so if I can just keep it in the fairway, I don't have that far in like some of the other girls,” said Alfredsson. “I do not compare myself to him whatsoever, but I think anybody that sees Tiger is off, he knows how to play the game. He knows where to hit it, what shots to hit, and I think we grew up in an era that we learned to play golf. You take time off, but you see a golf course if you can hit the golf shots, I mean, you can play the golf course.”

American Leta Lindley sits at -5 and one back of Alfredsson in her first appearance at the U.S. Senior Women’s Open, grinding her way to a 1-under 72 on Friday after opening with a 69 in round one. Lindley teed it up in as many events as possible to get ready for the event at NCR and so far, all of those competitive reps seem to be paying off. She recorded four bogeys and five birdies on day two and will ready herself for a weekend in contention, unfamiliar territory for the now teaching professional.

“I'm really excited,” said Lindley. “I've been working really hard, and I'm just going to stick to my game plan, which I've had some key words that I've been thinking of, and just determined, focus and patience, and really just taking it one shot at a time and trying to hit each shot the best I can and not trying to get ahead of myself. There's still a lot of golf to be played, and I'm just going to stick to that, and it's been working.”

Defending champion Annika Sorenstam found her footing in round two, carding a 3-under 70 to sit in solo third through 36 holes. The 72-time LPGA Tour winner made four birdies and one bogey on Friday and gave credit to an improved attitude as the reason for her improved play.

“I hit some really good drives, but still sprinkled in a few crappy shots, which on this course sometimes if you end up on the wrong side it can be difficult,” said Sorenstam. “Missed a few short putts, but I would say overall I was in a much better mood. I had the rhythm, had some momentum. It was fun out there, and just trying to go out there and enjoy and not feel constantly pressure in what I have to do. That's why I played better.”

First-round leader Tammie Green struggled on day two, shooting a 3-over 76 to sit alone in fourth and four back at -2. Catrin Nilsmark and Jill McGill are tied for fifth at -1 with two-time Senior LPGA champion Trish Johnson one back at even par. Inaugural Senior Women’s Open champion Laura Davies, three-time United States Solheim Cup captain Juli Inkster and LPGA Tour winner Jackie Gallagher-Smith round out the top ten in a tie for eighth at +1. A total of 52 players made the cut at +12. 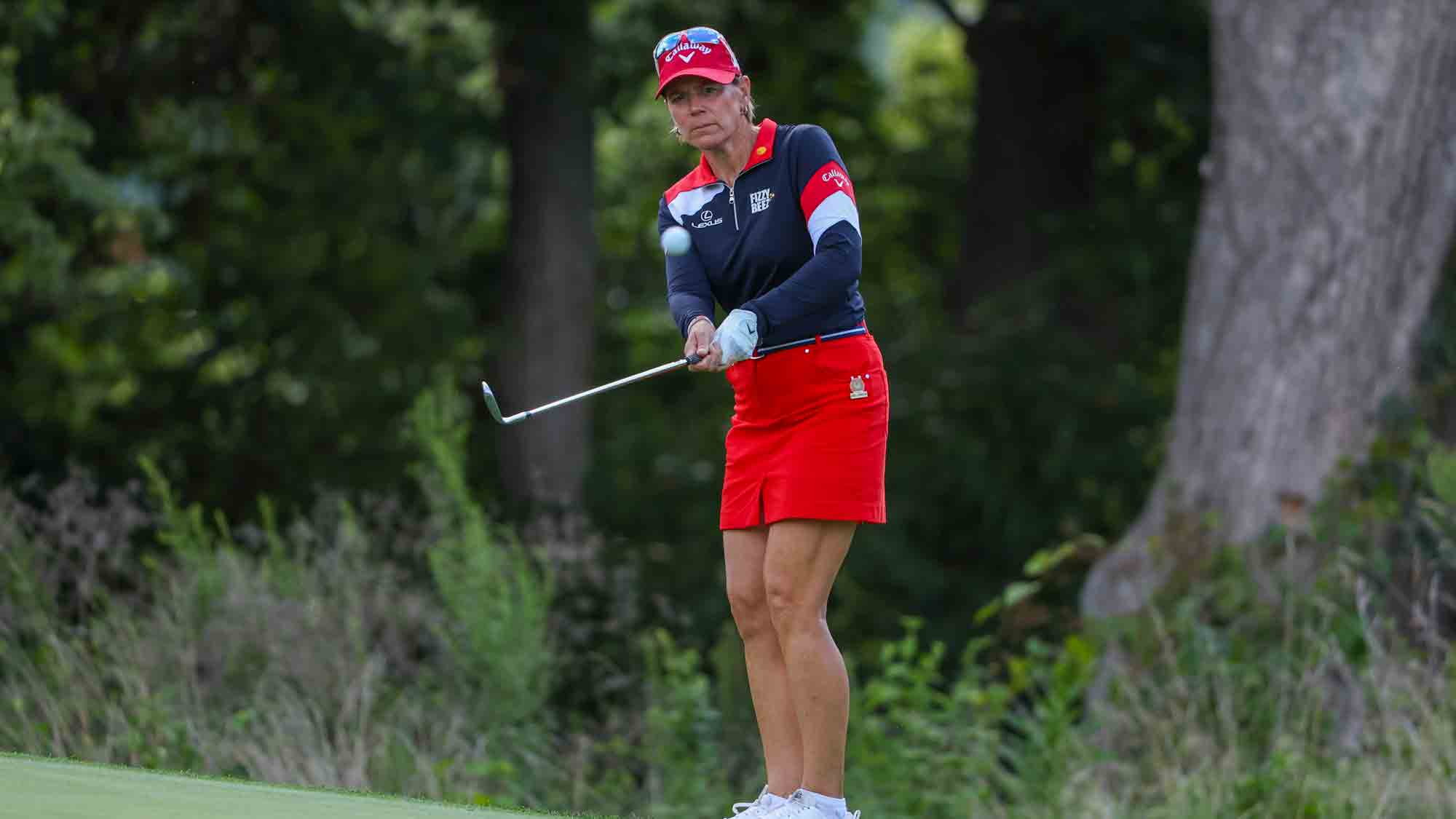 DEFENDING CHAMPION ANNIKA SORENSTAM NEAR THE TOP AFTER ROUND TWO

In an event filled with centuries of experience, athleticism and drive can make all the difference. No one has calculated the total number of golf years the field represents in this week’s U.S. Senior Women’s Open, nor has anyone done a complete count of the trophies these players have collectively amassed. But one thing is certain: when it gets to crunch time, LPGA Hall of Famer Annika Sorenstam is still going to grind her way to a spot near the top of the leaderboard.

Sorenstam shot a 3-under 70 on Friday, a round that included four birdies and a lone bogey. She enters the weekend in solo third, three shots behind fellow Swede and 2019 U.S. Senior Women’s Open champion Helen Alfredsson.

“I hit some really good drives, but still sprinkled in a few crappy shots, which on this course sometimes if you end up on the wrong side it can be difficult,” Sorenstam said after her round. “I missed a few short putts, but I would say, overall, I was in a much better mood. I had the rhythm, had some momentum. It was fun out there. I’m just trying to go out there and enjoy and not feel constantly under pressure in what I have to do. That's why I played better.”

In the “cream rises to the top” category, only six players finished the first two rounds under par at NCR Country Club. They are Alfredsson, first-time participant Leta Lindley, Sorenstam, first-round leader Tammie Green, Catrin Nilsmark (another Swede from that first wave of Scandinavian stars who hit the LPGA Tour in the 1990s) and American Jill McGill.

“Yeah, it was quite enjoyable, but it's a long day,” Sorenstam said. “It was a little warmer today and I think I feel a little beat.”

One of the reasons for her exhaustion is the work she put in ahead of time. Sorenstam and her husband and caddie, Mike McGee, went to the range after the even-par round on Thursday and hit an untold number of drivers, trying to put a Band-Aid on a two-way miss.

“What's hard is it wasn't like I was missing my drives one way,” Sorenstam said. “It was one way and then the other. That makes it a little difficult. But I tried to do a little better setup, kind of get my right shoulder down a little bit (at address) to feel like I'm coming more inside and around rather than being too square and sometimes coming (up and out) if that makes any sense. But I think I hit some better drives, and that's what you need here. (The course) wasn't long, but if you're not in the fairway, all of a sudden you have these angles in the rough that make it hard to get to some of these hole locations.”

There weren’t a lot of balls hit after the round on Friday, which is not a good sign if you’re in the rest of the field. Sorenstam will always show up prepared.

If she walked past the range, it means she’s ready.