If you’re one that believes in omens, Liverpool Football Club winning 9-0 over Bournemouth and tying the Premier League record for most goals in a single game should’ve told you who was destined to play well on day three at the U.S. Senior Women’s Open. Famously a diehard Kopite, it was Dame Laura Davies who fired a bogey-free, 5-under 68 on Moving Day in Kettering, Ohio, highlighted by three birdies and an eagle on the par-5 16th, and she now sits in a tie for the lead with Helen Alfredsson, who was seven shots ahead of Davies starting the third round. Her Saturday effort is even more impressive considering she’s been battling an Achilles injury since the AIG Women’s Open and has been struggling to walk the South Course this week at NCR Country Club.

“I had a bit of acupuncture on the old calf this morning, and although it's still painful walking, it took the pain off the swing so I could get through it again,” said the 20-time LPGA Tour winner. “I've got to thank the physios and all the guys in there for really helping me. Walking is miserable and I get very tired, but I was swinging really well. In fact, if anything, I got stronger coming in. My ball-striking even got better the last few holes.”

Davies’ 68 ties the low score of the week – Tammie Green opened with a 5-under round on Thursday – and with a Sunday in contention on tap, she’ll look to find some more of the magic she had at Chicago Golf Club in 2018 when she won by ten in the inaugural U.S. Senior Women’s Open.

“It will be a bit nerve-racking tomorrow, obviously, because I've not been in this position probably since I won it,” Davies said. “We’re not trying to prove anything out here. We're just trying to win a very important trophy, but you can't be too down on yourself because none of us play that much anymore, and it’s difficult to be in contention to win because you want to win so badly, but you haven't really got the game to back it up. I won't be hard on myself whatever happens tomorrow. I'm just trying to play well, and that would please me if I play well.”

It was a tough day for 36-hole leader Helen Alfredsson, who limped into the clubhouse with a 3-over, 75. The Swede was rolling through seven holes, making three birdies and one bogey to extend her lead and move to 8 under overall. But Alfie started leaking oil on No. 8, bogeying the 153-yard par 3, and played her last ten holes in three over, making two bogeys, one double and a birdie. Still, the 2019 Senior Women’s Open champion remains tied for the lead and it’s that fact that helped to sweeten the sour taste that Saturday’s round left in Alfredsson’s mouth.

“(I can take away) that I am tied for the lead still, that I didn't plummet like a stone in water, which is good, but it felt like it,” she said. “It’s the U.S. Open, and you know mistakes are going to come, and I did not hit the ball anywhere near as good as I did yesterday. But you know what? Like you said, I'm right in it. It's Saturday, and there's still one day more to go.”

Defending champion Annika Sorenstam was feeling similarly to Alfie through her first nine holes on day three. The 72-time LPGA Tour champion went out in 39, notching three bogeys in her last four on the front side, including a short three-putt on the par-5 6th. But, as the G.O.A.T. is wont to do, Sorenstam dug deep and fought back, making back-to-back birdies on 10 and 11 and grabbing another on 13. Her fourth birdie of the back nine was sandwiched between two bogeys on 15 and 17, and her final birdie putt of the day just hung on the lip, a disappointing finish to an even-par round of 73.

“Talk about a mixed bag. I felt very jittery. I felt very uncomfortable. I couldn't really find anything,” said Sorenstam. “I felt like I had 10 cups of coffee, and I haven't had coffee all week. I was trying to calm down. Mike was trying to calm me down, and then I hit some good shots, and all of a sudden I hit some really erratic shots in between. Just one of those days. I'm glad that it's over and I'm glad that I didn't really shoot myself in the foot.”

Sorenstam sits in a tie for third with Americans Jill McGill and Leta Lindley at -3. Two-time European Solheim Cup captain Catriona Matthew carded the second-lowest round of the day, a 3-under 70 that has her in solo sixth and three back of the lead. England’s Trish Johnson is alone in seventh at even par and four players are in a tie for eighth at 1 over, most notably seven-time major champion Juli Inkster and 1988 U.S. Women’s Open champion Liselotte Neumann. 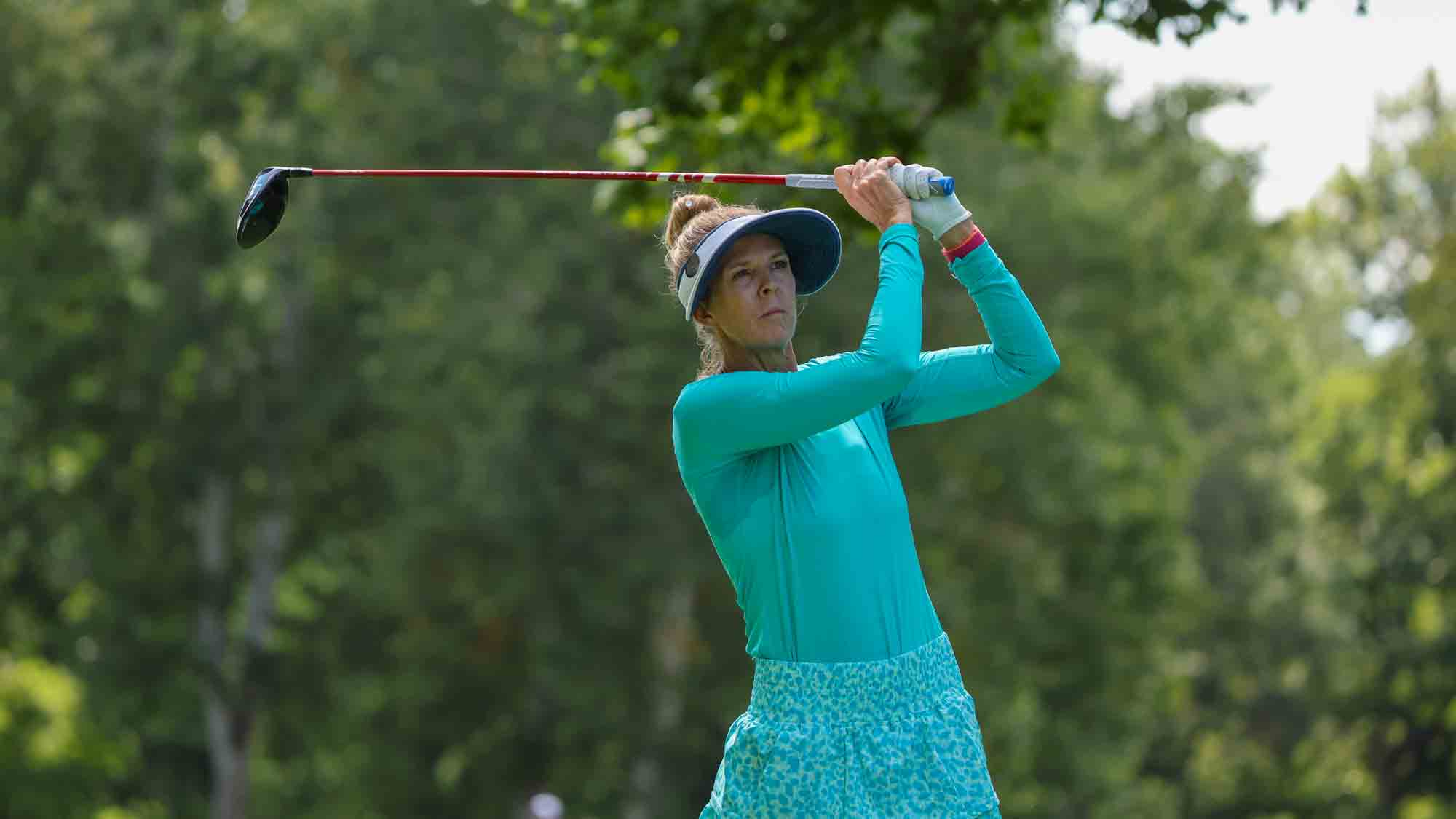 If you’re looking at the top of the U.S. Senior Women’s Open leaderboard, it’s a who’s who of storied champions that have a combined 160 LPGA Tour titles and 25 major championships to their credit. However, one name isn’t as familiar as all the rest: American Jill McGill. The 50-year-old never won during her tenure on the LPGA Tour, carding 24 career top-tens and taking home over $2 million in career earnings, but does have two USGA championships on her resume, the 1993 U.S. Women’s Amateur and the 1994 U.S. Women’s Amateur Public Links.

This week in Kettering, Ohio marked McGill’s first start in the Senior Women’s Open and now the mother of two is in contention for her first professional victory and first major title, one shot back of co-leaders Laura Davies and Helen Alfredsson.

“I honestly am happy to be in this position,” said McGill, who carded a 2-under 71 on Saturday to sit in a tie for third. “I'm hitting a lot of good golf shots. A couple of creepers come along from being out of play, but overall really happy.”

McGill will play in the penultimate pairing with defending champion Annika Sorenstam on Sunday at NCR Country Club and it’s actually not the first time the two have played together in a final round. The duo played in the final group at the 2002 U.S. Women’s Open, with Sorenstam finishing second to Juli Inkster and McGill crumbling under the pressure, shooting a 78 to finish in a tie for 12th.

But this time will be much different for McGill, especially since her children, Blaze and Bella, are in Dayton to support their mother and Jill’s sister, Shelley, is on the bag after recently recovering from ovarian cancer. Plus, with age comes plenty of wisdom and McGill knows that no matter what happens on Sunday, this week has been a success on all fronts simply because of who she gets to share this unforgettable experience with.

“It's not very often you get an opportunity for your kids to see you do something like this, especially having them later in life, so that's the number one thing for me,” said McGill. “I told my sister on the first hole (today), I had a conversation with myself that went something like, ‘Of course you're nervous. It's a Senior Open. That's okay, just embrace it, and now just try to hit the heck out of it.’ I'm sure they're going to be up there tomorrow, so I'm just going to try to breathe through it, enjoy the moment, and enjoy the opportunity.”