Alison Lee is an eight-year veteran of the LPGA Tour and a member of the victorious 2015 U.S. Solheim Cup team.
Topic: Alison Lee Drive On

The LPGA is honored to present the first of a series we call Drive On Reflections. The series launches with a powerful and personal story from LPGA Tour veteran Alison Lee, one that reminds us that while May is Mental Health Awareness Month, we should encourage and support those who may be experiencing challenges every day.

People only see the good side. They see the leaders, the winners, the stars they have come to know and whose games they admire. But very few know of the struggles and the heartaches. Not many understand how dark and lonely it can be for the lives of professional golfers.

I knew that golf was my destiny at a young age. When I was 6, my parents entered me into a Los Angeles city golf program called Tregnan Golf Academy. It was $25 for two months of weekly golf lessons. They lied about my age because you had to be 7 to enter. It wasn’t an issue because I was able to keep up with the other boys and girls in my class; however, I was quickly outed when we were instructed to take a written test on the rules of golf, and the coaches saw that I had trouble spelling certain words.

While attending this Academy for a few years, I had gained a new family. All the kids would get together on Saturdays and have friendly competitions. Tregnan would host tournaments at the nearby nine-hole, par-3 course, and that is where I went on to win my very first golf tournament at the age of 7. That was the moment I fell in love with golf. I drew the connection between work and reward. I loved beating the older kids and coming out on top. I wanted more and didn’t want it to end.

A year later, at age 8, I competed in the Junior World in San Diego. Girls came from all over the world to compete against each other and that’s where I met Lexi Thompson and the Jutanugarns. In fact there were several players in that event who are on the Tour now. I won my age division there as well. 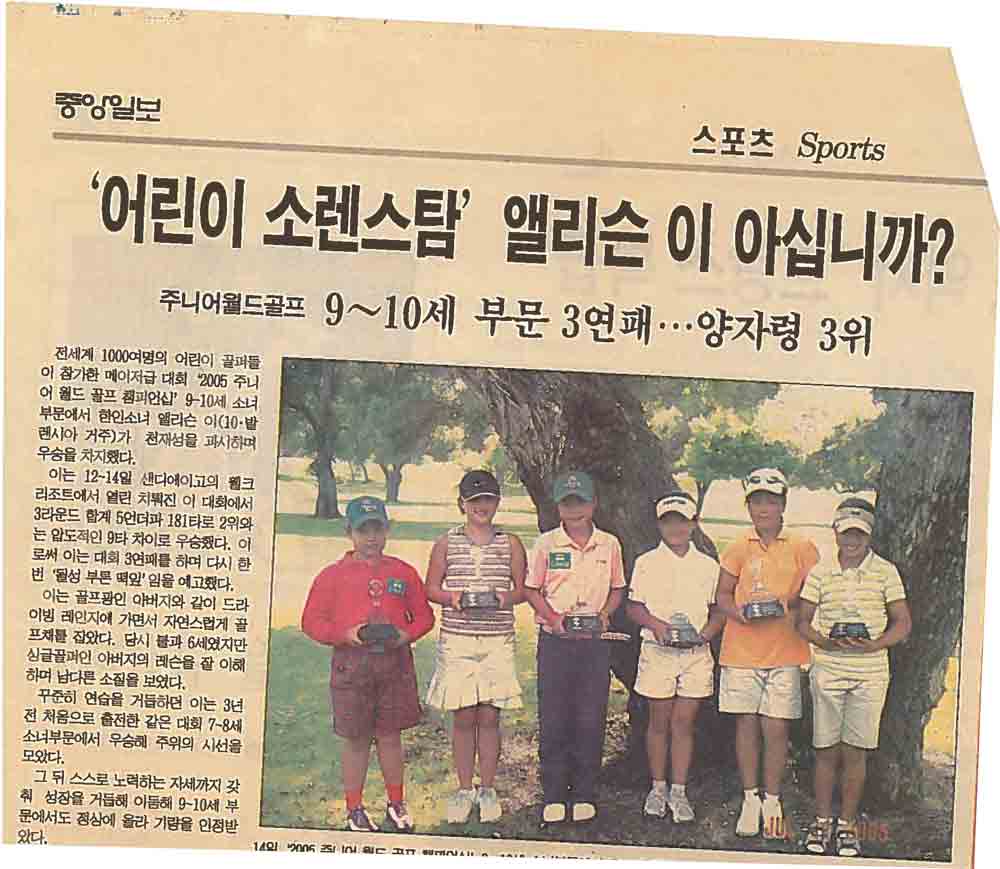 From there, I felt as though my life was on a steady incline. I won the first American Junior Golf Association event I entered at age 12. I soon became an AJGA first team All-American for six years in a row. I qualified for the U.S. Women’s Open at 14 and made the cut. I would enter every tournament with the goal of winning. When I did, winning became a habit, almost easy. Midway through high school, I considered not going to college and turning pro right away. My whole life goal was to make it as a professional golfer.

Then, in the middle of my 15th year, I experienced my first slump. I had a growth spurt. Suddenly my golf swing became foreign. I started to get the “yips” I couldn’t hit the ball anywhere near the fairway or green. It jarred my confidence and made me question everything. For as long as I could remember, I had always been the best, but that one year, it felt as though I wasn’t going to make it. I felt like my whole world was ending. My whole identity was golf.

Armed with my first experience in self-doubt, I decided to go to college. I committed to play at UCLA, one of the best decisions I’ve ever made.

There were certainly some moments when I questioned myself and my potential. Jessica Korda, the Jutanugarns, Lexi Thompson and I all played junior golf together. Seeing them turn pro right away tugged at my heart because I felt as though I was good enough to play alongside them. However, going to college was the right choice for me. During my first year at UCLA, I was the Pac-12 Player of the Year and won the Annika Award as the best player in college golf. I was able to play on the victorious U.S. Curtis Cup Team alongside players Ally Ewing, Emma Talley, Annie Park and Mariah Stackhouse among other friends.

Just like that, I slipped back into the feeling that golf was easy. I was the No. 1-ranked amateur in the world, and felt it was right to try and fulfill my dreams on the LPGA Tour.

I turned pro after a year and a half competing for the Bruins, but I remained in school to earn my degree while competing on the LPGA Tour. However, the transition wasn’t easy. I didn’t have any sponsors, but had enough money saved up to play through my first year on tour. Despite the pressures, I had a better rookie year than I could have imagined. My game put me in contention numerous times, and I vaulted up the Rolex Rankings, reaching No. 25 in the world. It earned me into a spot on the 2015 Solheim Cup team, a dream of mine since I first represented the USA on the Junior Solheim Cup team in 2009. Traveling to Germany with my teammates that I was watching on TV the year prior, was one of the highlights of my professional life.

But then, after a couple of years on Tour, a wave of darkness that I thought I left behind started to creep back in. Struggling with an injury and failing at many attempts to win my first tournament as a professional created self-doubt and frustration. I felt as though I was able to accomplish everything I set my mind to at every level. Now, the only thing I was missing was my first professional victory. I went from showing up every week expecting to be in contention to not having the confidence to make a cut.

Three years after being on the Solheim Cup team, I was back at Q School. I felt worthless. I kept asking myself: What am I doing? Why do I keep putting myself through this? I had just graduated from college the year before and had been struggling with a lot of decisions. I was living in Las Vegas, alone, and I was miserable. My college friends were getting jobs and moving up in the world. My friends on tour were all performing better than I was. I was happy that all of them were accomplishing great things, but I couldn’t help but feel like I was falling behind. At a young age, I thought that this life was meant for me, and at that very moment, it was slipping through my fingers. Teeing it up for a tournament wasn’t exciting anymore. The little white golf ball that was once my best friend became my biggest fear. I became terrified, anxious and sick to my stomach at the thought of stepping on a golf course.

Worried for my future, I started looking up job opportunities, telling my mom that if I didn’t get my card back, I was done. I had played so poorly that I had to go back to Second Stage of Q School before advancing to Q Series. Thankfully, I made it through. And while the following season was marginally better, I still failed keep my card.

The end of 2019 was when I truly considered calling it quits, but my parents encouraged me, “Give it one more year and we’ll see what happens.”

The first event of the year in 2020 was when I felt all-consumed by the game of golf. With my conditional status, I had to Monday qualify to get into the field for the first time ever, and had a plan set up for the year. I made it through and knew that if I just made the cut that week, I would get reshuffled up and get into more fields. But on the drive to the course for the opening round, excitement turned into fear, and I had a panic attack. Every mile I got closer to the course; the more anxiety overcame my body. I couldn’t breathe and I could hardly see with all the tears streaming down my face. The feelings became so overwhelming that I began to look at the concrete barrier on the interstate and considered crashing my car into it, because I would rather have been in the hospital than have to tee off and compete. In that moment, anywhere else besides the golf course felt safe.

That was my rock bottom.

People don’t see that side of golf. They don’t see the anxiety, the mental anguish on both the women’s and men’s tours. The pressures that are set on us by ourselves and society. Waking up every day to get better at what we do, but also the failures that might come with it. Some days feel like a giant step forward, while others feel as though everything is completely lost. We are all just one shot away from believing we are the number one player in the world, or one shot from wanting to throw it all away.

Back to when I was 15, someone said something to me that I will never forget. I had a terrible first round at a tournament. I was sitting on the putting green debating on whether I should withdraw and go home. I had never withdrawn from anything up until this point. The thought of having to show up the next day and play another round was mortifying. A friend and her father came and sat with me to help me make my decision. Her father told me, “When you are going to war, and about to enter battle, you must fight. When you are on the battlefield and see the enemy running towards you, you must stand your ground. No matter how terrified you are, if you are fighting for what you believe in, you cannot run away.”

He was right. If I wanted to be the best golfer I can be, I needed to stand my ground. But what her father failed to mention and what I realize now is that I was not alone on that battlefield. There are many of us fighting together. Going through the same emotions, thoughts, and doubts. We have an army of people, united and fighting the same enemy. There is no shame in turning the other direction, but just know that we are all in this together.

I am still here. Battling through these struggles every day, because I have to stay strong. Because I love this crazy game of golf with everything it gives and everything it takes. No path is ever easy, and no two paths are ever the same.

That is what it takes to show up every week and unlock your full potential.

You have to find the light in your darkest moments. I’m getting there – one step, one swing, one round, one day at a time.