With Gratitude … From An “Accidental Trailblazer

With Gratitude … From An “Accidental Trailblazer"

Judy Rankin played on the LPGA Tour from 1962-1983 and is a member of the LPGA Hall of Fame and World Golf Hall of Fame. She’s been a TV broadcaster covering both the PGA and LPGA Tours for more than 38 years.
Topic: judy-rankin Drive On

I was born in St. Louis in 1945. My father, Paul, served in the Army during World War II and worked in the printing business after he returned home. He married my mother, Waneta, while stationed in San Antonio.

My father loved three things: the Bible, his family, and Ben Hogan.

His love of Hogan was surprising. At his best, my dad was a 16 handicap. He appreciated Hogan’s search for perfection and eventually adopted his discipline of practice for me.

My mother was sick for most of my childhood. She passed away when I was 11. I won’t sugarcoat this:  growing up with a parent who was seriously ill was hard. When I was five, I remember my mother started having convulsions. One night when I was six, she was well enough to go out. We went to a lighted driving range. My mother and I watched my dad hit balls. And like all six-year-olds, I wanted to try.  Surprise: I could hit a ball!

I learned to swing a club in the basement of the Chase Hotel. A local pro, Bob Green, set up a makeshift range using large tarps. That’s where he gave lessons in the winter.

Bob was the first of many people who made an indelible impression on me through his generosity and support. We didn’t have a lot of money and he never charged a penny. He was affiliated with Wilson Sporting Goods and got clubs for me that fit.

By the time I was seven, my mother had developed a brain tumor that paralyzed the left side of her body. After that, my father never played golf again. He transferred his love of the game to me. The LPGA was a very young association at the time, so there was no illusion of making it rich as a pro golfer. My father saw my talent and believed golf would make my life better.

That would turn out to be true in so many ways. Thank you, Dad!

Of course, he expected me to work hard and adopt Hogan’s pursuit of perfection. Honestly, most of the time I wished I was able to play with my friends instead of practicing golf. But I was a serious child – a “pleaser” - and practiced, sometimes hitting hundreds of balls a day.

Bob Green was responsible for introducing me to members of a private club in St. Louis’ Forest Park, Triple A. They gave me access to their range and course. For a seven-year-old, that was pretty amazing.

I’d become a local prodigy. My first competition outside of St. Louis was the National Pee Wee Championships in Orlando. I was eight and competed in the 9-10 division.

The Triple A members gave me a new suitcase with $400 in it to cover the trip. It might as well have been a million dollars. At the time, it was the most expensive and overwhelming gift I had ever received. It is still the most impactful.

I’ve never forgotten what those members did for me. That’s why today, I help juniors through the JTR Suitcase Fund.

I won the National Pee Wee Championship from the age of eight until I was 12 years old. At 14 years old and weighing only 80 pounds, I won the Missouri State Am.

Sports Illustrated put me on their cover when I was 16. And at 17, I left high school and joined the LPGA Tour. I always planned to get my high school diploma, but never did.

The LPGA Was My Neighborhood

Some describe the early years of the LPGA as a traveling circus. For me, it was my neighborhood where I grew up and learned a lot about life.

I met my husband, Walter “Yippy” Rankin, at a Pro-Am when I was 21. He had played football and baseball at Texas Tech and coached high school football near his hometown of Midland, TX. We married 3 1/2 weeks after we met. All these years later, it’s still the best and most impulsive thing I’ve ever done!

I suppose Yippy and I matured together. I know he made me tough and a real competitor. And I always knew he was on my side.

Our son, another Walter (“Tuey”), was born in 1968. I won for the first time that year at the Corpus Christi Civitan Open. Yippy had gone to work for Aetna Insurance, and we realized it was a good time to travel as a family, long before Tuey started school. Again I leaned on my neighborhood - the LPGA Tour – to help with Tuey while we all played golf. This was long before the Smucker’s Child Development Center that LPGA moms use today. I relied on tournament directors, friends, and family members of other players to help us. It was certainly a community effort.

I went on to win 28 professional events over my playing career.

Then, in 1973 I developed what would become chronic back issues. I fought through it for 10 years before retiring in 1983. 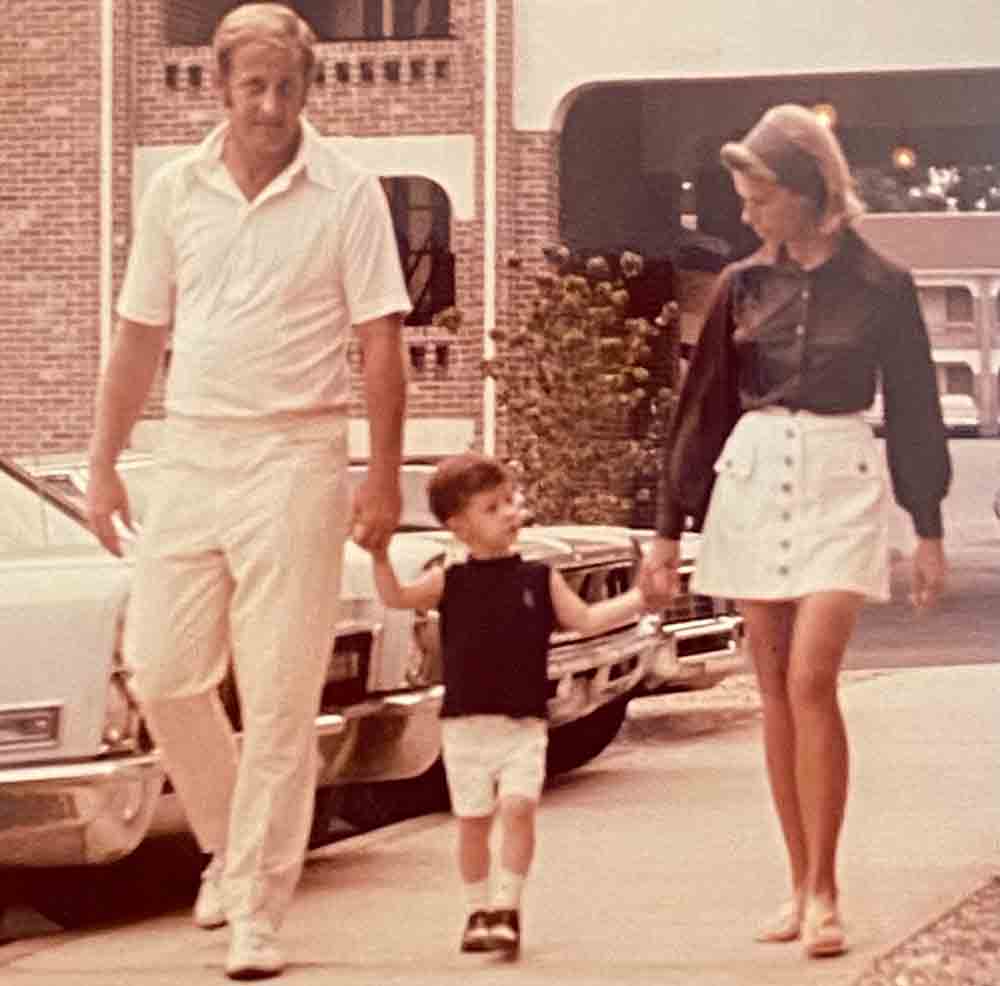 A Different Way To Love The Game

Bob Rosburg had become a good friend of ours. He worked for ABC Sports and suggested me for a role as an on-course reporter for the 1984 US Women’s Open. I was a bundle of nerves, because I had never been good talking in front of people. But I’d always loved golf on TV and I knew the game and the players. Besides, I didn’t have to look in a camera. I just answered Jim McKay’s questions.

The following year, ABC needed a third on-course reporter for the 1985 US Open at Oakland Hills. They called me because I’d done it once before. I’m still stunned by what a bold move it was for ABC to ask a former LPGA Tour player to cover men’s golf at the highest level. I certainly didn’t appreciate the full weight of the opportunity at the time. But again, I said “yes,” which opened a whole new world of learning and a new way for me to love the game.

I covered the PGA Tour - what I’ve called “the other best players in the world” - for more than 25 years for ABC and ESPN. I knew nothing about TV when I took the job and learned from some of the very best: Jack Whitaker, Jim McKay and Mike Tirico are just a few.

I also learned to appreciate the uniqueness of each swing and each player’s personal story. I admired the complexity of the game with its infinite variables. I tried to help viewers understand what separates the dominant player from the rest of the best. And I was on the course to share the breakthrough moments of victory or heartbreaking moments of defeat.

In 2010, I became the lead analyst for the Golf Channel / NBC while still doing some work for ESPN. It allowed me to serve the LPGA in a different way and work with the very talented Golf Channel team. I shared the booth with Terry Gannon, Tom Abbott and Grant Boone.

I’m proud that more women are having opportunities on TV. Dottie Pepper, Kay Cockerill and Karen Stupples provide expert insight on the course and are part of my broadcast family.

There are generations of players and fans now who know me only as a broadcaster. But it was my success on the LPGA Tour that led to my TV opportunity.

Over the years, my father never lost his respect for Hogan and the pursuit of a perfect swing. Near the end of his life, Daddy told me something that meant a lot: “Judy, I think you played golf for me. TV was for you.”

With my broadcasting career winding down, I’ve been overwhelmed by the kind comments and tributes. There’s a word that’s been often used that brings me great satisfaction and some humility: “trailblazer.”

I didn’t set out to be a trailblazer when I joined the LPGA Tour.

I didn’t set out to be a trailblazer when we raised our son while I was playing on tour.

I didn’t set out to be a trailblazer as the first female broadcaster covering the PGA Tour.

I didn’t set out to be a trailblazer by extending my career well into my 70s.

I didn’t set out to be a trailblazer when I was in the public eye while battling breast cancer or grieving the loss of my husband.

I never set out to be a trailblazer, until I realized how many people were watching and how much people cared.

Here’s what I know about “trailblazers”. It’s a badge that history gives you; not something you know you’re doing at the time. And, no one does it alone.

Golf, the LPGA and TV have given me so many opportunities.  As I bring this chapter of my career to a close to focus on my Suitcase Fund and my family, I wanted to express my gratitude.

Gratitude for a game that has created opportunities I never dreamed of; gratitude for the many people who have helped me along the way; gratitude to the LPGA for all that the tour and its members have done for me, and gratitude that this “accidental trailblazer” has seen real and meaningful change:  both in the growing respect for LPGA players and in the opportunities for women on TV. 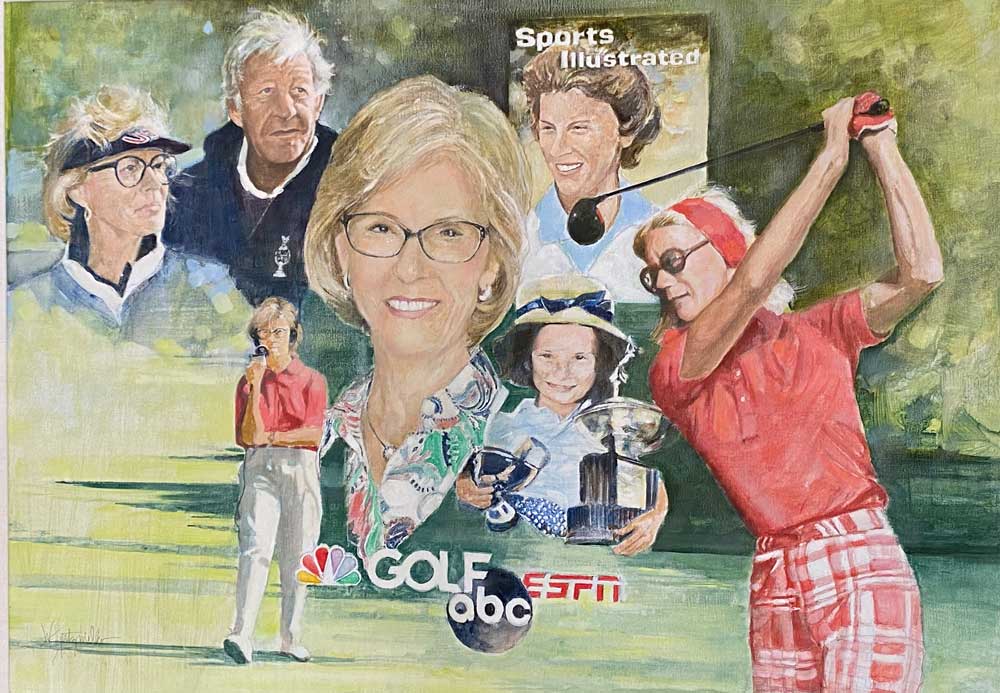 This painting was a gift to Judy Rankin from the PGA TOUR when she was named 2015 Ambassador of Golf.

They say if you’re lucky in life, you find work you love; you’re good at, and that makes a difference. To have found that twice is a blessing beyond measure.

To everyone who has been part of this magnificent journey, thank you.

I’m Judy Rankin and I still Drive On!

For more Information About the JTR Suitcase Fund.