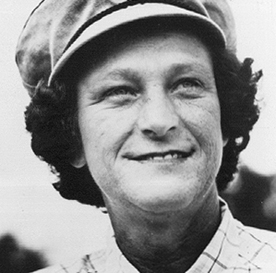 Mildred Ella Didriksen was the born in 1911 as the child of Norwegian immigrants who settled in Port Arthur, Texas. But this LPGA co-founder and LPGA and World Golf Hall of Fame member became better known as “The Babe” during her lifetime in sports. Moreover, she was the centerpiece for the LPGA Tour in its early days.

Zaharias was an Olympian who was often called the “greatest female athlete in history.” She starred in track and field, winning gold medals and setting or tying world records in the 80-meter hurdles and the javelin, and winning the silver medal in the high jump at the 1932 Olympic Games in Los Angeles. She also was an All-American basketball player, earned her nickname after hitting five home runs in a single baseball game in the style of home run king Babe Ruth, and was said to have been equally adept in tennis, bowling, billiards, diving and roller skating.

But it was golf, and specifically, the LPGA, where Zaharias made her final mark. She began focusing on golf in 1934, and won her second tournament a year later at the 1935 Texas Women’s Invitational. Two weeks later, the USGA ruled that she was a professional athlete because of her earnings in baseball and basketball, but she regained her amateur status in 1943, and won 17 amateur events from 1946-47, including the 1946 U.S. Women’s Amateur Championship and the 1947 Women’s British Amateur Championship. She turned professional in August 1947.

Taking her showmanship cues from husband George Zaharias, a Greek-American professional wrestler, Babe was said to have shown up at professional tournaments and announced to the media, “The Babe is here! Who is going to finish second?” It was that brashness that rubbed some of her peers the wrong way, but they also recognized her star power in those early years, and all knew it was Zaharias who drove fans through the gates to see the Olympic gold medal winner play golf.

Zaharias didn’t disappoint. Quick with the quips, she would stand on the first tee before she hit her first tee shot and announce that she was going to “loosen my girdle and let it fly.” Her swaggering style and athleticism gave her 41 professional wins, with 10 victories prior to the LPGA’s start in 1950, with 36 professional titles on the LPGA Tour, including 10 major championships. She still holds the LPGA’s record as the player who reached 10 wins, 20 wins and 30 wins the fastest.

She also tried her hand on the PGA Tour in 1945, making two cuts in three tournament starts. Zaharias became the first and only woman to make the tournament cut in a regular PGA Tour event. She entered two of those events by playing a 36-hole qualifier.

In 1953, Zaharias underwent the first of two surgeries for colon cancer, but she battled back and won the 1954 Vare Trophy for the LPGA’s low scoring average. She also won the 1954 U.S. Women’s Open only months after another operation. Zaharias won five times in 1954 and two more events in 1955. The cancer returned and she underwent another surgery in 1956, ultimately succumbing to the disease in September of that year at age 45.The great champion received the 1957 Bobby Jones Award posthumously.