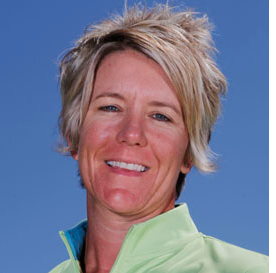 5’10”...Started playing golf at the age of 12...Credits her mother, who passed away in 2004 from pancreatic cancer, and father as the individuals most influencing her career...With the help of her father and sister, raises money for pancreatic cancer research through a dog walk and golf outing; visit www.SLBfoundationofhope.org for more information…Enjoys mountain biking, reading and going to the beach...Served as honorary chairperson of the 2005 Special Olympics Golf National Invitational Tournament…Inducted into the Iowa State University Athletics Hall of Fame on May 22, 2006…Qualified for the Tour on her third attempt.

Bader began her golf career in Iowa, where she won the 1991 Iowa Junior Open, 1991 Des Moines Open and 1992 Waterloo Junior Open. She continued to build her resume with a win at the 1995 Quad City Women’s Amateur and a runner-up finish at the Iowa Women’s Amateur. As a member and captain of the Iowa State University (ISU) women’s golf team, Bader was a medalist at the 1993 Northern Illinois Huskie Invitational and was the team’s most valuable player in 1993-94. Bader also was a runner-up at the Big Eight Championship and is the only player from ISU to earn All-Big Eight honors for two years. In 1996, Bader was named ISU’s Female Athlete of the Year.