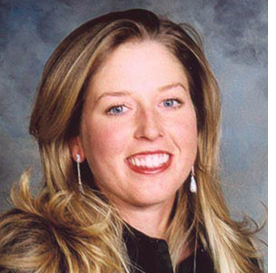 5’8”...Started playing golf at the age of 3...Credits her late father John, who was a teaching professional and her first golf coach, and her mother Chris as the individuals most influencing her career...Hobbies include fishing, going to the movies, shopping and reading...After one attempt at the LPGA Final Qualifying Tournament (2000), qualified for the LPGA Tour by placing first on the 2001 Futures Tour money list.