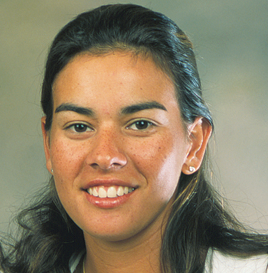 5’4”...Started playing golf at the age of 9...Credits her first teacher, her parents and her family as the individuals most influencing her career...Hobbies include dancing, going to the beach and horseback riding...Fluent in Portuguese, Spanish, English and German.