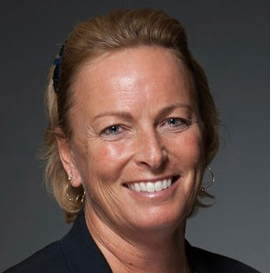 5’5”...Credits George Pulver, Don Pepper, Judy Rankin and Charlie Mechem as the individuals most influencing her career...Inducted into the Furman University Hall of Fame in 1992...Named the South Carolina Professional Athlete of the Year from 1991-92...Named 1992 Golf Writers Association of America Female Player of the Year...1993 ESPY Award winner as Outstanding Women’s Golf Performer of the Year...1993 Jim Thorpe Award winner...Recognized during the LPGA’s 50th Anniversary in 2000 as one of the LPGA’s top-50 players and teachers...Co-winner with Terry-Jo Myers of the 2001 Daytona Beach (Fla.) Kiwanis Foundation Humanitarian of the Year Award...Inducted into the New York State High School Hall of Fame in July 2007…Inducted into the South Carolina Athletic Hall of Fame in 2008…Competed as Dottie Mochrie from 1988-95...Hobbies include gardening, music, sports cars, downhill skiing and wine collecting...Qualified for the Tour on her first attempt.

Amateur
Pepper was the 1981 New York State Amateur champion, the 1981 and 1983 New York Junior Amateur champion and the 1982 PGA National Junior runner-up. She was named to the 1981 Junior World Cup Team and, in 1983, was a quarterfinalist at the U.S. Girls’ Junior Championship. A year later, she was the low amateur in the U.S. Women’s Open. Pepper is a graduate of Furman University, where she twice was named Female Athlete of the Year, was the 1987 Athlete of the Year, captured five individual tournament titles and was a three-time All-American.
Tournaments
Top Stories