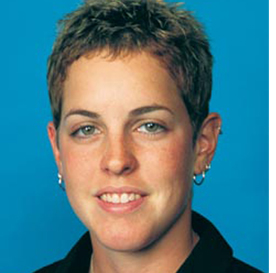 5’5”, brown hair, brown eyes...Started playing golf at the age of 9...Credits Charlie Wood, Mic Potter, Ron Materni and her parents Russ and Lorraine as the individuals most influencing her career...Inducted into the Furman University Athletics Hall of Fame in 2003...Was the 2002-03 spokeswoman for the LPGA-USGA Girls Golf program...In 2005, named head coach of the Furman University women’s golf team, only the fifth head coach in the 33-year history of the program…Has two brothers, Craig and Geoff...Enjoys in-line skating, basketball, hiking, mountain biking and rock climbing...Qualified for the Tour on her second attempt.