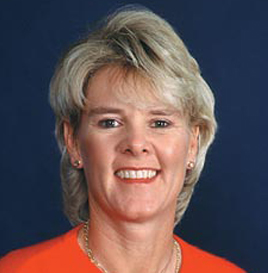 5’8”...Started playing golf at the age of 16...Credits Clark Collins, John McPhee and John Elliott as the individuals most influencing her career...Married Michael Piers in 1995...Maiden name is Larsen...Competed as Julie Larsen from 1992-95...Gave birth to first child, John Michael (Jack) in 1998...Gave birth to second child, Emma Ann Louise, in 2001...Hobbies include reading and travel...Qualified for the Tour on her sixth attempt.

Career
• In 2003, carded a season-low 68 during the first round of the Sybase Big Apple Classic presented by Lincoln Mercury, where she tied for 35th, her best finish of the season; also shot 68 in the second round of the State Farm Classic.
• In 2002, posted her best finish since 1998 with a tie for 15th at the ShopRite LPGA Classic.
• In 2001, gave birth to her second child, Emma Ann Louise, on Feb. 26; played a limited schedule.
• In 2000, posted her season-best finish at the Philips Invitational Honoring Harvey Penick, where she tied for 16th.
• In 1999, best finish was a tie for 20th at the Firstar LPGA Classic.
• In 1998, competed until one month before the birth of her first son, John Michael (Jack), on Oct. 9; top finish of the season was a tie for ninth at the Australian Ladies Masters.
• In 1997, posted a career-low score of 65 during the first round of the Welch’s/Circle K Championship, where she tied for seventh.
• In 1996, finished second at the McDonald’s LPGA Championship, one of the four LPGA major championships; recorded her second LPGA career hole-in-one during the second round of the Oldsmobile Classic.
• In 1995, became a Rolex First-Time Winner at the First Bank Presents the Edina Realty LPGA Classic.
• In 1994, best finish was a tie for fourth at the Toray Japan Queens Cup.
• In 1993, season-best performance was third place at the Lady Keystone Open.
• In 1992, recorded her first LPGA career hole-in-one during the third round of the ShopRite LPGA Classic; best finish was sixth place at the Sun-Times Challenge.
• In 1991, ranked 25th on the Women Professional Golfers’ European Tour (WPGET) Order of Merit and ranked fourth on the Asian Tour Order of Merit; tied for 13th at the LPGA Final Qualifying Tournament to earn exempt status for the 1992 season.
• In 1990, won the Futures Team Classic on the Futures Tour.