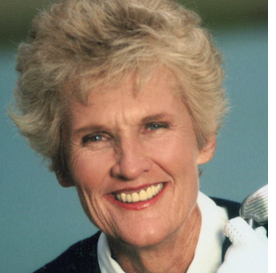 5’9”...Given name: Kathrynne Ann Whitworth...Began playing golf at the age of 15...A member of the President’s Campaign Against Drug Abuse...Tutored by Harvey Penick and Hardy Loudermilk...Associated Press Athlete of the Year in 1965 and 1967...President of the LPGA Tour Player Executive Committee from 1967-68, 1971 and 1989...Served as player director during the 1986-87 seasons...Paired with Mickey Wright, made golf history as the first women’s team to compete in the PGA-sanctioned Legends of Golf...Received the Metropolitan Golf Writers and Golfcasters Gold Tee Award in 1984...Honored by the LPGA with the 1986 William and Mousie Powell Award and the 1987 Patty Berg Award…Named “Golfer of the Decade” by GOLF Magazine for the years 1968-77 during the 1988 Centennial of Golf in America celebration...Inducted into the LPGA Tour and World Golf Halls of Fame, New Mexico Hall of Fame, Texas Sports and Golf Hall of Fame and the Women’s Sports Foundation Hall of Fame...Received the 1985 William Richardson Award from the Golf Writers Association of America for consistent outstanding contributions to golf...Named an Honorary Member of the LPGA T&CP membership in 1993...Honoree of the 2000 Subaru Memorial of Naples...Recognized during the LPGA’s 50th Anniversary in 2000 as one of the LPGA’s top-50 players and teachers...In 2001, along with four-time British Open champion Bobby Locke, selected as honoree of the PGA Tour’s 2002 Memorial Tournament…Awarded the 2001 Legends of Women’s Golf Award by the Mercedes-Benz Collegiate Championships, an NCAA event...Honored with the 2004 Sports Legends Award…Named the 2006 PGA First Lady of Golf…Received the 2008 Linda Vollstedt Award for Service and Leadership in Women’s Sports…Is a member of the LPGA Commissioner’s Advisory Council...Represents Lady Fairway.