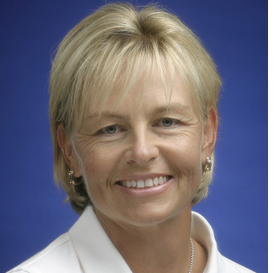 5’7”...Credits her family and friends, the Swedish Golf Federation and her first coach Pierre Karstrom as the individuals most influencing her career...Named 1988 Golf Digest Rookie of the Year...1994 Swedish Golfer of the Year...1994 Golf World’s Most Improved Golfer...Recognized during the LPGA’s 50th Anniversary in 2000 as one of the LPGA’s top-50 players and teachers...In 2007, participated in the Susan G. Komen for a Cure Breast Cancer 3-Day walk in San Diego, where her team raised more than $70,000…Hobbies include working out, hiking, all sports, playing with her dog PeeWee, cooking, food and wine…Represents Callaway and Pahr…Affiliated with www.sportsforeducation.