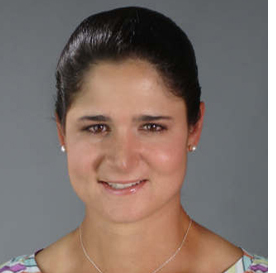 5’6”...Started playing golf at the age of 5…Credits her family, coach and friends as the individuals most influencing her career…Hobbies include reading and water skiing…Selected as the 2005 Hispanic Female Athlete of the Year for the first Hispanic Sports Honors Presented by State Farm…Named Mexico’s Female Athlete of the Year in 2001, 2006-07…Qualified for the LPGA Tour by finishing first on the 2002 Futures Tour money list…Recognized in 2006 and 2007 as both the Associated Press Female Athlete of the Year and Golf Writers Association of America (GWAA) Female Player of the Year...In 2007, opened Ochoa Golf Academies…Through the Lorena Ochoa Foundation, opened three schools for elementary children in Mexico…Named 2007 Women’s Sports Foundation Individual Sportswoman of the Year, recognized as one of Newsweek magazine’s 11 Most Powerful Women in 2007 and one of Glamour magazine’s 2007 Women of the Year…Donated $100,000 to the flood victims Tabasco, Mexico, after winning the 2007 ADT Championship…In 2008, was selected as TIME magazine’s 100 most influential people in the world, named one of Fitness magazine’s Fit 50 and won her third consecutive recognition as the GWAA Female Player of the Year…Is a playing editor for Golf Digest...Represents Banamex, CitiGroup, Audi, El Rio Country Club, Rolex, Lacoste, Selther, PING and Aeromexico…Married Andres Conesa on Dec. 4, 2009...Has her own Web site, www.lorenaochoa.com.

Amateur
Ochoa had a record-setting amateur career that included 12 collegiate victories at the University of Arizona, eight of which came in 10 events in her sophomore year. In 2001, she tied for seventh at the Welch’s/Circle K Championship as an amateur. She finished second in the 2001 NCAA Championship after losing to now fellow LPGA Tour player Candy Hannemann in a playoff. She was also NCAA Player of the Year and NCAA Freshman of the Year in 2001. Her eight consecutive wins in the 2001-02 season is an NCAA record. She was the NCAA Player of the Year and a First-Team All-American in 2002 after finishing tied for second in the NCAA Championship. She was a two-time winner in Japan as a junior, a five-time U.S. 8-12 Junior World Championship winner, a three-time champion in Colombia and an eight-time national champion in her native Mexico. She was the 2003 recipient of the Nancy Lopez Award, which is given to the best female amateur golfer from the previous year.
Tournaments
Dow Great Lakes Bay Invitational Midland, MI
The Amundi Evian Championship Evian-les-Bains, France
Trust Golf Women's Scottish Open Ayrshire, Scotland
AIG Women's Open East Lothian, Scotland
ISPS Handa World Invitational presented by Modest! Golf Management Antrim, Northern Ireland
Top Stories