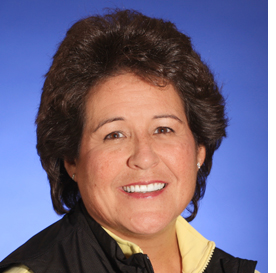 5’5”…Started playing golf at the age of 8 under the guidance of her father Domingo and turned professional after her sophomore year of college...Is a playing editor for Golf For Women magazine...Named Female Player of the Year by the Golf Writers Association of America (GWAA) from 1978-79 and in 1985...Named “Golfer of the Decade” by GOLF Magazine for the years 1978-87 during the Centennial of Golf in America celebration in 1988...Inducted into the PGA World Golf Hall of Fame in November 1989...Awarded the 1992 Flo Hyman Award by the Women’s Sports Foundation...Recipient of the USGA’s 1998 Bob Jones Award to recognize distinguished sportsmanship in the game of golf...Recipient of the 2000 William D. Richardson Award from the GWAA as well as the Golf Course Superintendents Association of America’s Old Tom Morris Award...Recognized during the LPGA’s 50th Anniversary in 2000 as one of the LPGA’s top-50 players and teachers...Inducted into the Georgia Sports Hall of Fame in February 2001...Named to Hispanic Business magazine’s list of 80 Elite Hispanic Women in April 2003...Presented with the 2003 Billie Jean King Contribution Award from the Women’s Sports Foundation...In 2004, became the first woman to receive the Frances Ouimet Award for Lifelong Contributions to Golf…Recipient of the 2006 ASAP Sports/Jim Murray Award given by the GWAA...In 2008, inducted into the New Mexico High School Hall of Fame…Founder and principal of the Nancy Lopez Golf Company...Married Ed Russel on June 25, 2017...Gave birth to daughters Ashley Marie in 1983; Erinn Shea in 1986; and Torri Heather in 1991...Competed as Nancy Lopez-Melton from 1980-81.

Lopez was only 12 when she won the New Mexico Women’s Amateur, and in the following years, she won the U.S. Girls’ Junior Championship twice (1972, 1974). She won the Western Junior three times and the Mexican Amateur in 1975. Also in 1975, Lopez entered the U.S. Women’s Open as an amateur and finished in a tie for second. The next year, she claimed the Association of Intercollegiate Athletics for Women (AIAW) National Championship and was a member of the U.S. Curtis Cup and World Amateur teams. At the University of Tulsa, Lopez was named a 1976 All-American and the university’s Female Athlete of the Year.