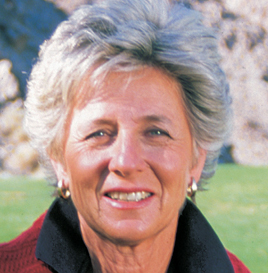 5’1-1/2”...Started playing golf at the age of 13 in Maine, where she worked as a caddie...Credits Ernie Vossler, Harvey Penick and John Revolta as the teachers most influencing her career...Named 1975 Female Player of the Year by the Golf Writers Association of America...Named North Texas State’s Alumnus of the Year in 1977...Inducted into Texas State Golf Hall of Fame in October 1985...Inducted into the National Collegiate Hall of Fame in 1988...Is a Class A member of the LPGA Teaching & Club Professional (T&CP) membership...Joined the Jim McLean Golf Academy at PGA West in 1998...Was co-chairman of the 1999 Colorado Women’s Open held in Denver, Colo....Recognized during the LPGA’s 50th Anniversary in 2000 as one of the LPGA’s top-50 players and teachers...Is head teaching professional at Sahalee Country Club in Sammamish, Wash.