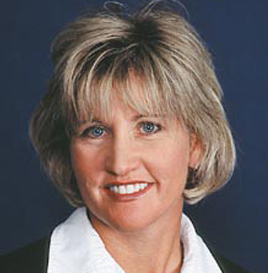 5’9”...Credits her family, husband Gary Mundy, Jr. and golf professional Mike Calbot as the individuals most influencing her career...Gave birth to daughter Taylor-Jo on July 29, 1989...Is a national spokesperson for the Interstitial Cystitis Association (ICA) and has testified before the U.S. Senate in an effort to raise funds for research...Received the 1998 Ben Hogan Award from the Golf Writers Association of America... Launched the “On Course for Better Health” program with Dottie Pepper in 2000 and 2001...Co-winner with Dottie Pepper of the 2001 Daytona Beach (Fla.) Kiwanis Foundation Humanitarian of the Year Award.

Amateur
Myers collected several victories during her junior career. She was a five-time winner of the Southwest Florida Junior Golf Association Championship. In 1983, she won the Southwest Florida Women’s Amateur. During her college career at Florida International University, she was runner-up at the 1984 Lady Buckeye Invitational.