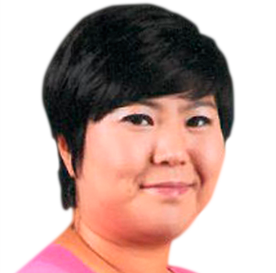 5’7”...Started playing golf at the age of 10...Credits her parents as the individuals most influencing her career...Hobbies include watching football and basketball…Competed as Jacqueline Yang in 2007-08…Qualified for the Tour on her first attempt.

Amateur
Yang won the 1997 Freeport-McDermott Classic and the Rolex Tournament of Champions. That same year she won the Florida High School State Championship, placed second at the Nabisco Mission Hills and was ranked fourth nationally among junior girls by Golfweek. She ended 1997 by being named a Rolex First-Team American Junior Golf Association (AJGA) All-American. While at the University of Tennessee, she won the 2001 Betsy Rawls Intercollegiate and finished second at the 1999 and 2000 Southeastern Conference (SEC) Championships. She was named the 1999 SEC Freshman of the Year and was a four-time All- SEC selection. She also finished fifth at the 2001 NCAA Championship. Yang was the first Lady Vol golfer to earn First-Team All- American honors by the National Golf Coaches Association and was a four-time NCAA All-American. In college, she finished in the top 10 in 26 tournaments and during the 2000-01 season recorded a women’s collegiate season-low 65 (-7) at the Bryan National Collegiate.
Tournaments
ISPS Handa World Invitational presented by AVIV Clinics Antrim, Northern Ireland
CP Women's Open Ottawa, Canada
Dana Open presented by Marathon Sylvania, OH
Kroger Queen City Championship presented by P&G Cincinnati, OH
AmazingCre Portland Classic Portland, OR
Top Stories