Deb Vangellow, Teacher of the Year 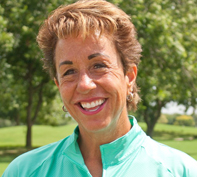 Deb Vangellow is the Director of Instruction at Sweetwater Country Club in Houston, Texas. In addition to teaching men, women, senior and junior golfers of all skill levels individually and in groups, Vangellow is the first ever National Vice-President for the LPGA Professionals and a lead instructor in the LPGA National Education Program, the industry leading teacher training program for golf professionals.

"I am enormously honored and grateful for this award and I feel fortunate to be included among so many great teachers on this prestigious list,” said Vangellow.  “Many on this list are mentors to me, a very special thing.  To them I say, thank you for believing in me; to the LPGA, a HUGE thank you for giving me such great tools and experiences to help me to continue to grow as an educator and coach; to all of my students over the years, thank you for your continued support and friendship in this wonderful game of golf we all love so much!"

An LPGA Master Professional Member, Vangellow holds both a Bachelor of Arts and a Master of Science Degree in Health/Physical Education/Coaching and Educational Leadership/Psychology from the University of Northern Iowa and Miami (Ohio) University respectively. A multi-sport athlete who was a scholarship recipient, captain, and letter winner in soccer and track, Vangellow has chosen to devote her career path to develop into a top golf educator. Her experiences reflect this endeavor.

Vangellow has a long list of teaching accolades, she is a three-time LPGA Central Section Teacher of the Year, a Golf Digest “50 Best Women Teachers in America,” an LPGA “Top 50” Teacher, a Golf Digest and GOLF Magazine “Top Regional Teacher,” a US KIDS GOLF “Top 50 Kids Teacher,” and was continually featured in the now-retired Golf For Women magazine as a “Top 50” teacher.   In addition, Vangellow will be inducted into the University of Northern Iowa Athletics Hall of Fame on September 29 and inducted into the University of Northern Iowa Hall of Excellence, Class of 2012, on November 3.

Vangellow also serves on The LPGA Foundation Board of Directors, the National Advisory Council for Junior League Golf, The First Tee Golf Advisory Committee, and the Journal of Applied Golf Research Advisory Staff.

The LPGA Teacher of the Year award was established in 1958 and is presented to an LPGA Professionals member who best exemplifies her profession during the year.


Jane Broderick, Professional of the Year 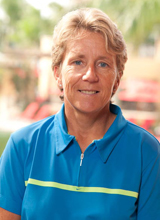 Jane Broderick is the Director of Golf Operations at PGA National Resort & Spa, a 90-Hole Private Golf Resort Destination in Palm Beach Gardens, Florida.  Elected to membership in the PGA of America in 1990, and the LPGA T&CP in 1994, Broderick is a PGA and LPGA Master Professional, certified in Tournament Operations with the PGA of America, and is a member of both the PGA Master Professional Adjunct Faculty, and the PGA Connecting with Her Committee.

“Being recognized by ones’ peers is the highest of honors one can receive.  My sincere congratulations go out to the other honorees along with all of those who were considered.  Just to be ‘on the list’ is more than I could have hoped for,” said Broderick.  “I try to set a good example for my staff and other professionals and to continually uphold the brand of the LPGA, the PGA and PGA National.  I have been extremely fortunate to have spent the majority of my career working alongside a wonderfully talented staff, at an incredible facility, and to be supported by the most loving and devoted family one can imagine, because without that combination, I would not have received this award.”

In addition to her LPGA and PGA responsiblities, Broderick is on the Advisory Board of the Golf Association of Florida, is a Board Member of the Northern Palm Beaches Chamber of Commerce, and sits on the Tournament Committee for the Leta Lindley Prader Willi Classic.

Shelly Liddick, Coach of the Year

“I am absolutely honored beyond words to receive such a high honor from the LPGA and my professional peers,” said Liddick.  “Many of the previous honorees of the LPGA Coach of the Year award are women whom I have looked up to for years. I am so humbled to now be on that list with so many legendary golf coaches. I feel a great responsibility to continue on the journey of coaching others to discover their own unique greatness.”

In 1993 Liddick began her college coaching career at UAB (University of Alabama-Birmingham) before moving to Phoenix, AZ where she was the Co-Director of Instruction at Raven Golf Club – South Mountain. While in Phoenix she focused on teaching and coaching players of all levels and also managed the golf schools. In 2001, Coach Liddick moved to Oregon where she started the girl’s high school golf program at Summit High School in Bend, OR. Coach Liddick’s brand- new program qualified for the Oregon High School Girls State Golf Tournament in both the first and second years while she was the coach. In 2002, Wichita State University hired Coach Liddick to take over the women’s golf program.

Coach Liddick credits her success to the late college golf coach, Joann Beddow.  Liddick spent hundreds of hours observing and assisting Beddow in teaching and coaching golf.
The LPGA Coach of the Year award was established in 1980 and is awarded annually to an LPGA Professionals member who is actively engaged in teaching and/or coaching golf at the collegiate or high school level. 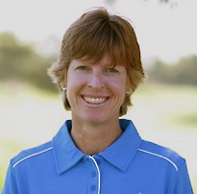 Kay Cornelius has been the teaching professional at Ocotillo Golf Resort, in Chandler, Arizona, since 1995.  Cornelius has a long history in junior golf, having grown up on the LPGA Tour as a “tour baby” (mother Kathy Cornelius is a 27-year LPGA Tour veteran and the 1956 U.S. Womenʼs Open Champion, and father, Bill, is a PGA Life Member).
A successful junior golfer herself, Cornelius was the youngest winner of the U.S. Girlsʼ Junior Championship in 1981 (age 14).  She continued her success as a junior golfer, winning the Junior World Championship and the Arizona State Junior Championship twice during the early ʻ80s.  As a junior and amateur golfer, Kay played in 19 USGA Championships from 1979 to 1987, including the U.S. Womenʼs Open in 1982 at age 15.

Cornelius played college golf at Stanford University from 1984 to 1988, competed in four NCAA championships, and earned NCAA All-American honors in 1988. After earning a B.A. in sociology from Stanford University, she turned professional and competed on the following worldwide tours: Ladiesʼ European Tour, the Ladies Asia Golf Circuit, the Futures Tour and the Playersʼ West Golf Tour from 1988 to 1997.
Since 1996, teaching and coaching golfers of all ages and experience levels has been and continues to be her passion.  She has a special gift for teaching junior golfers and has taught several current and past NCAA Division I collegiate players.  Cornelius began her involvement with the LPGA-USGA Girlsʼ Golf Club in 1996 and directed the Future Stars program from 2001 to 2006.  She also founded the Ocotillo Golf Resort After-school Junior Golf Program in 2000.

“Being recognized as the 2012 LPGA National Junior Golf Achievement Award winner is a tremendous honor, especially since it's the first year this award has been presented,” said Cornelius. “Getting to do what I love every day and to be recognized with one of the LPGA's highest honors is a fantastic feeling.  Thank you to all those who have influenced me personally and as a teacher/coach…a special 'thanks' goes out to everyone at my home club, Ocotillo Golf Resort, who have been so supportive of my teaching/coaching over the years."

Even though junior golfers encompass a large part of her clientele, Cornelius teaches/coaches men and women golfers of all ages and ability levels.  In addition to being voted by her peers as LPGA Section “Teacher of the Year” twice, she was nominated as a Golf Magazine “Top 100 Teacher” for 2007-2008.  Currently, Kay is recognized by Golf Magazine as a “Top Regional Teacher” and by US Kids' Golf as a "Top 50 Kids Teacher."  Cornelius also serves the LPGA as a National Evaluator.

When she isnʼt at the golf course, Kay enjoys photography, doing yoga, working out, hiking, reading, and walking in the Ocotillo community.
The LPGA Junior Golf Leadership award was established in 2012 and is awarded annually to an LPGA Professionals member who excels in the area of teaching and promoting golf for juniors.

About the LPGA Professionals

More than 1,700 strong, LPGA Professionals are dedicated to the advancement of golf and serve throughout the golf industry as head professionals, assistant professionals, teaching professionals, directors of golf, owners of golf schools and facilities, golf administrators, college and high school coaches and more.

LPGA T&CP members support the LPGA’s various grassroots programs that were created to involve women and youth in golf as well as contribute to the overall growth of the sport. These programs include LPGA-USGA Girls Golf, LPGA Tour Junior Clinics, the LPGA Lesson Zone, and LPGA Golf Clinics for Women.