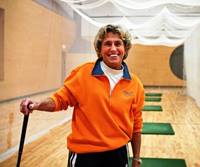 Jeri Reid became a member of the LPGA Professionals in 1985. She was an active Tour Player whose playing career was cut short as a result of an injury sustained in a car accident.

She then picked herself up and started putting the pieces back together and began on a successful career path of teaching and inspiring golfers to play the game she loved so dearly.

But she never gave up, and, in Jeri's words, "You have to pick yourself up and move on."

Unfortunately, Jeri dealt with these numerous health issues until she lost her long, courageous and inspirational battle with cancer in April of 2016.

The Jeri Reid Spirit of Golf Award was established in 2014 and will be awarded annually to a Midwest Section member who inspires others by their actions just as Jeri Reid has touched countless lives throughout her career.