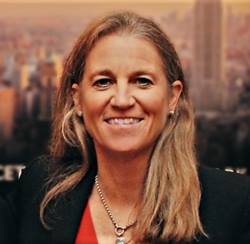 In 2014, Marcoux Samaan was recruited back to Princeton as the University's Ford Family Director of Athletics. In her seven years as Director of Athletics, Princeton teams won a league-leading 65 Ivy League Championships and finished as high as 30th in the prestigious Learfield IMG Cup standings, which measures overall success of all Division I Athletics programs. During her tenure, Marcoux Samaan developed and executed a 5-year strategic plan that included the development of Princeton Tiger Performance, a unique holistic athletic performance initiative, and the design/development of over $200 million in facility renovations and new construction. In 2020-2021, Marcoux Samaan received the NACDA (National Association of College Directors of Athletics) Athletics Director of the Year Award.

A passionate golfer from a young age, Marcoux Samaan has taken that same long-term strategic thinking to the world’s oldest independent professional women’s sports league. In her tenure as LPGA Commissioner, she has defined the six strategic pillars and instituted a new Be Great performance model. She has worked closely with players, board members, partners, and independent advisors to crystalize the core purpose and values of the LPGA, which includes a firm commitment to being the global leader in women’s golf and using that unique platform to inspire, empower and transform the lives of girls and women on and off the golf course.

With a fervent commitment to working collaboratively with like-minded corporate partners, purses continue to rise on the LPGA Tour under Marcoux Samaan’s leadership with more than $95 million in total purses and events in 11 countries. 2022 has seen the highest purses and winners’ checks in women’s golf history. She also spearheaded the reorganization of the tournament business and operational models, as well as hiring the organization’s first chief marketing, brand and communications officer. She is committed to enhancing the LPGA player experience with a focus on the physiological, psychological and environmental factors leading to peak performance in golf and in life. She was instrumental in the rollout of the new LPGA Hall of Fame criteria and has focused new and substantial resources to the LPGA Growth Brands & LPGA Professionals, with the goal of integrating the organization and providing the game of golf to more girls and women from all geographic, racial and socio-economic backgrounds.

Marcoux Samaan has become a leader for all of women’s sports, assuming the spokeswoman mantel on issues related to equality and inclusion. She is a leading advocate for increasing investments and growing opportunities for women in girls in every field of sports and entertainment.

Marcoux Samaan and her husband, Andrew Samaan, are the parents of three children: Maddie (19), Catie (16) and Drew (13).